Apocalypse Now? – Not yet, but Next Winter for sure!

Apocalypse Now – Almost, but surely next winter. But the newspapers ignore as the responsible persons do. The PhilStar wrote a week ago:

5 natural tourist spots to visit in Camiguin, the ‘Island Borne of Fire’

The humming and drumming get louder as you approach—it’s the music of the Tuasan Waterfalls of Mainit, Camiguin—another hidden gem that’s a sight to behold. The high column of water cascades with invigorating force and then splashes into a natural pool perfect for swimming and cooling off.

Bounded by awe-inspiring rock formations adorned by the foliage of the island’s rich flora, Tuasan Falls is a unique experience in Camiguin that’s beyond just springs and beaches.
Read the whole article.

Read the last paragraph again and compare with the picture. There are no rock formations. There is no foliage. There is no more rich flora. The only thing left over is an ugly concrete wall that can not hold back the permanently sliding volcano slope. Apocalypse Now! The poetry of “awe-inspiring rock formations” compared with the grey concrete construction gives a hint to journalistic fantasy.

Compare the pictures from May 2016 and May 2019. Three years only lay between the two photos. Click on the pictures to enlarge them.

Already in my article from May 2016 I explained why this slope will slide down until the volcanic hill will be levelled out. Meanwhile they increased the height of the concrete wall twice. Now it has an estimated height of about 7 – 8 meters (23 – 26 feet). Looking at the gorge already washed out, we must expect a monstrous disaster during next wet season from December to February. See also these dramatic pictures.

Although sitio Tuasan is the worst place along the roadside over Camiguin’s mountains, it isn’t the only one. Driving up to the top, you encounter many rockfalls and landslides. Read below my suggestion.

There is no hope but a solution

This hill should never have been damaged. Natural forces will bring it down until its slopes are again smooth and on same level as the surrounding terrain. It cannot be repaired. But it can be given back to nature!
The great advantage of tropical climate are the extremely fast growing plants. Nature would take back what man had stolen and destroyed. But within 10 years almost all sins will be forgiven and forgotten. One could again safely stroll through the forests while being being astonished by those geometrical structures and the sparse concrete plates of the former road.
Therefore I suggest to close the road from above Mainit up to Mt. Timpoong Hibok-Hibok Natural Monument park.

Reactivate the former jungle path from Mainit to the Tuasan falls and make it accessible for wheel chairs. The Mount Timpoong park will still be accessible from Mambajao. Then again you will hear “The humming and drumming getting louder as you approach—it’s the music of the Tuasan Waterfalls“. It will again be the original tune! And all this without the danger of falling rocks and landslides.

There is a similar yet not so dramatic situation near Old Volcan Daan.
To understand you must know that Camiguin’s Circumferential Road is a national highway. These highways are directly under order of the government in Manila. This road around Camiguin Island is in an excellent state for more than 10 years. Its two lanes are absolutely sufficient for local traffic and even can absorb all traffic hikes during peak vacation season.
But years ago the government in Manila decided to widen all national highways to 4 lanes. This order created crazy situation all over the country, making absolutely no sense for local development. A similar situation as here in Camiguin I found at the slopes of Mount Bulusan volcano in Sorsogon. Currently they replace the former scenic road from Bulusan to Irosin by a 3 or 4 lane concrete snake. Click on the pictures to enlarge.

Currently the road widening is attacking the scenic road on the foot of Old Volcan Daan. Also here the road had been very good and safe until the widening started. 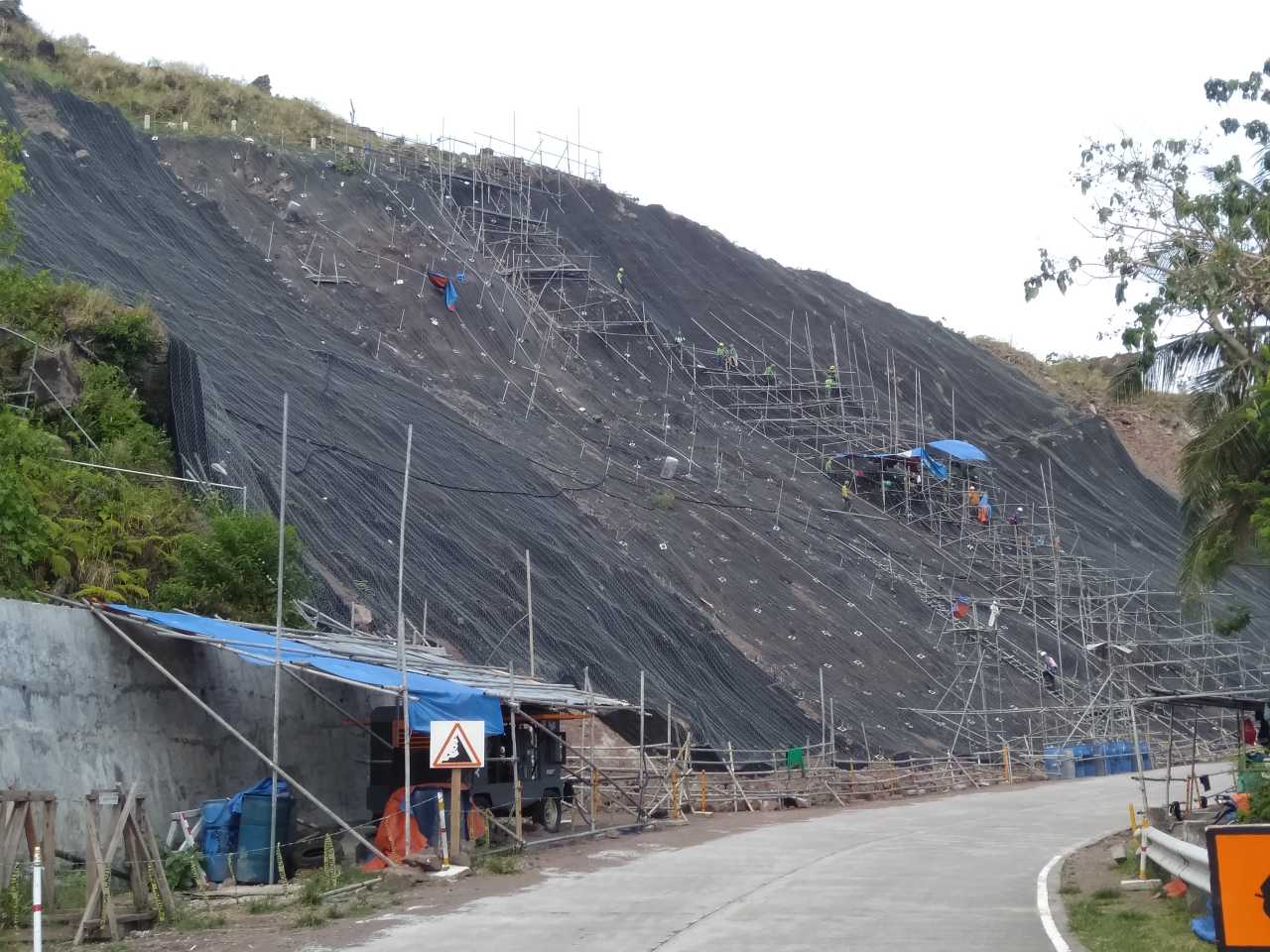 Unfortunately in the beginning they also “planted” ugly concrete walls to catch the now falling rocks (left side). But they learned! They now set deep rock-anchors and cover the hurt slope with a tight steel mesh. This method isn’t cheaper, but it allows nature to cover the man-made wound with new vegetation. The new plants will stabilise the slope again. Once the steel mesh will be rusty crumbles only, the roots of the plants will take over the anchor job.
To accelerate the recover by nature, in many places around the world forest engineers spray a mix of natural fibres and seeds over the mesh. Already a year later green plants cover the soil and after a year more first trees are are growing.

Local government, local schools and local enterprises should now invest into vocational education. Vocational education is education that prepares people to work as a technician or in various jobs such as a trade or a craft. The best form of this education is given in most European countries. The apprentice works in a company under guidance of a confirmed professional. But one day per week, the young person goes to school to learn the theories behind his future profession and get an extended general education. Such a training typically lasts for 3 or 4 years.
Here are many skilled young people on the island. With a corresponding training and education they could contribute to a proud Camiguin island, developed by indigenous people who have roots and knowledge.