The Balikbayan Boxes arose in the 1980s when the Tariff and Customs Code of the Philippines was amended and provided duty and tax free privileges to overseas foreign workers (OFW) due to resurgence of Filipinos working overseas. The Philippine Bureau of Customs Circular allowed tax-free entry of personal goods in the country from Filipinos overseas. People then began sending items through friends and co-workers who were returning to the Philippines.

Around 5.5 million Balikbayan Boxes are shipped to the country every year and the bulk enters the ports from September until year’s end.

Balikbbayan Boxes can be sent from almost any country where a Filipino community exists. In these countries Filipino start-up entrepreneurs founded companies specialized in freight handling and freight forwarding.

The big advantage is that almost anything can be sent with Balikbayan Boxes. The Bureau of Customs (BOC) clearly states the allowed and forbidden items. Officially allowed are:

Non-commercial goods or goods not in commercial quantity strictly for personal use only, such as: wearing apparel, clothing, foodstuffs/grocery items/canned goods; the value of which must not exceed US$500.00.

The Bureau of Customs (BOC) will no longer collect the import processing fee of PHP 250.00 for packages arriving in the country’s ports. In the same order, the BOC reduced the “amount of Documentary Stamp Tax for Informal Entry” from PHP 265 to PHP 15. W hope these reductions will be given to our friends abroad. There are more good news…

The sender as well as the receivers would like to know where their Balikbbayan Boxes are at this very moment. Will they arrive before Christmas? This is why most of the Balibayan box forwarders offer a tracking system. Either when the box is picked up at the sender’s place or later by e-mail or text message these organizations provide the sender with a tracking number. Our 3 boxes from this summer had the following tracking: 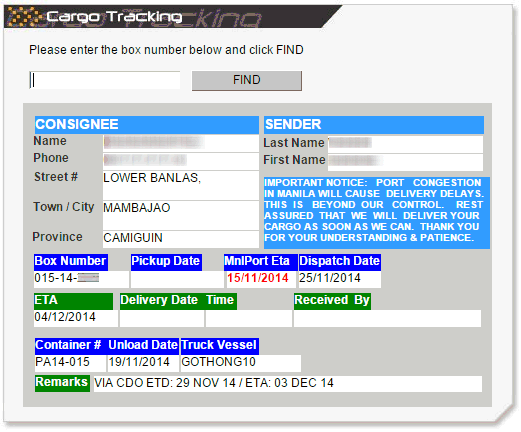 The above 3 boxes arrived on December 11, 2014, about 3 months after having been picked up in Europe. That’s normal.

The Bureau of Customs (BOC) has introduced their own tracking system.

The only problem for sender and receiver is to know either the BL number, the foreign forwarder and/or the local forwarder. There is still some improvement needed. Also should the BOC guys get some training in world geography. But everybody is so happy, when the delivery van honks out of the gate and there are so many surprises arriving.