Bohol Sea Monsters – Deep Sea Fish surface – Are they linked to the Earthquakes? 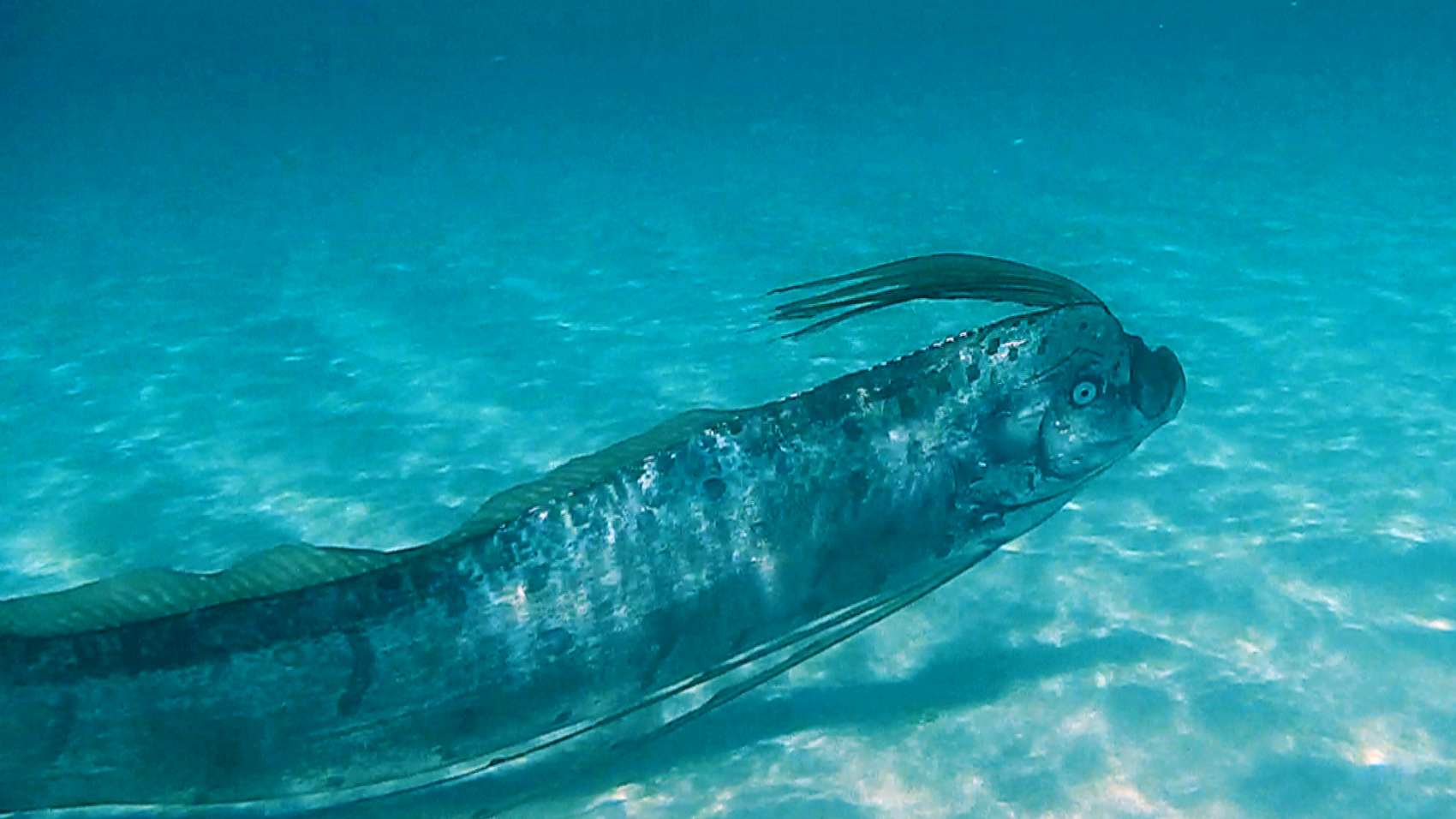 On Mindanao’s northern coast as well as around Camiguin some never seen monsters surfaced.  Several unusual sea creatures have been washing up on the island’s shores. 6 ‘Messengers of the sea god’ also known as Oarfish have surfaced. Locals found them on the beaches in Agusan del Norte, Misamis Oriental and Camiguin in the last 2 weeks.
A dwarf sperm whale was found at the shoreline of Barangay Baloy in Cagayan de Oro City two days ago.
Gobsmacked locals rushed to take selfies with the 20 foot creature after it appeared on a beach in Cagdianao, the Dinagat Islands this week.
Just a few days after an oarfish drifted off Gusa in Cagayan de Oro City, a fisherman caught another bizarre looking fish off Balingasag town in Misamis Oriental. Biologist identified this fish as a sunfish or mola-mola. 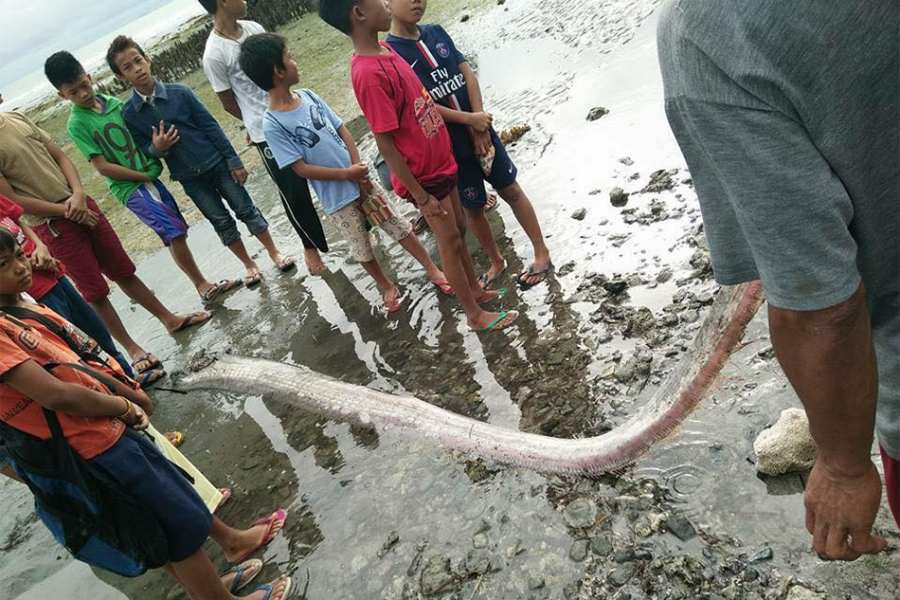 Regalecus glesne is the longest of the bony fishes.  The longest confirmed specimen was 36.09 feet (11 meters) in length.  A more common length is around 9.84 feet (3 meters). The Giant Oarfish is also typically a deep-sea fish found between 200-1000 meters and found in all of the major oceans.  Giant Oarfish feed on krill, small fish, and squid. 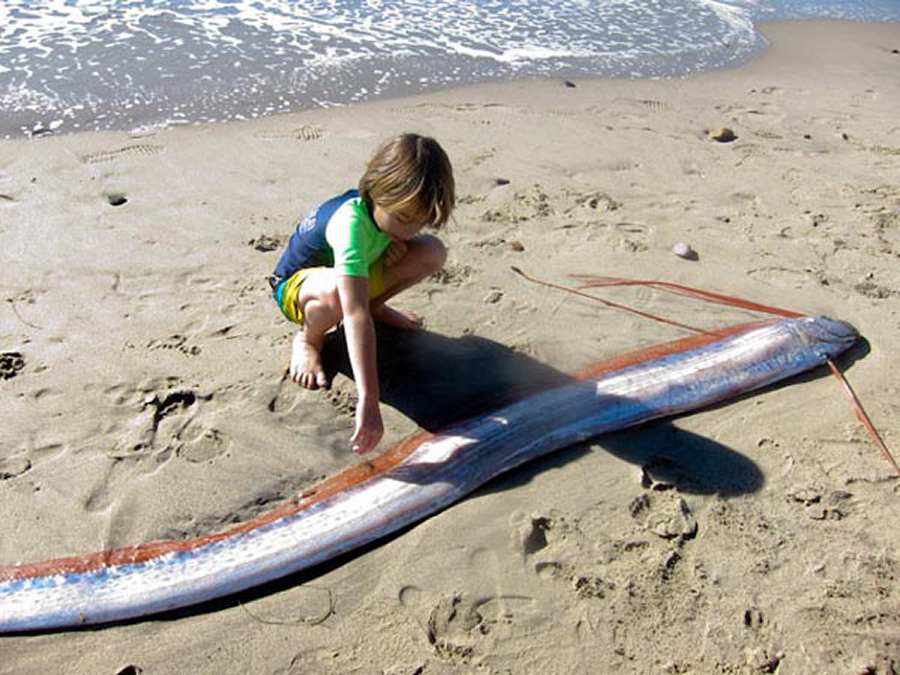 In Japanese folklore, the Oarfish is known as the “Messenger from the Sea God’s Palace” and appears on beaches to predict earthquakes. In Agusan del Norte the first fishes appeared a day before the strong Magnitude 6.7 earthquake of February 10, 2016. 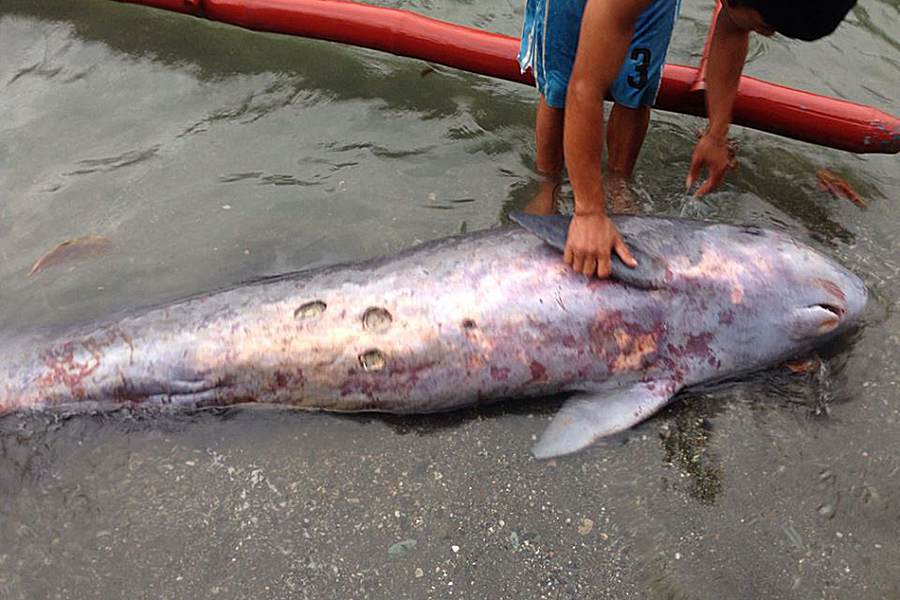 The dwarf sperm whale is the smallest species commonly known as a whale. Like other sperm whales, the dwarf has a spermaceti organ in its forehead from which it can expel a dark reddish substance when frightened or attacked. Dwarf sperm whale are endangered species and not often seen.
According to Laboratory Analyst John Roy Obsines of the Bureau of Fisheries and Aquatic Resources’ (BFAR) region 10 office, the dead whale might have suffered from stress, and was the victim of a shark attack. The small whale had several injuries–its wounds were round, and seemed to be cookiecutter shark bites. 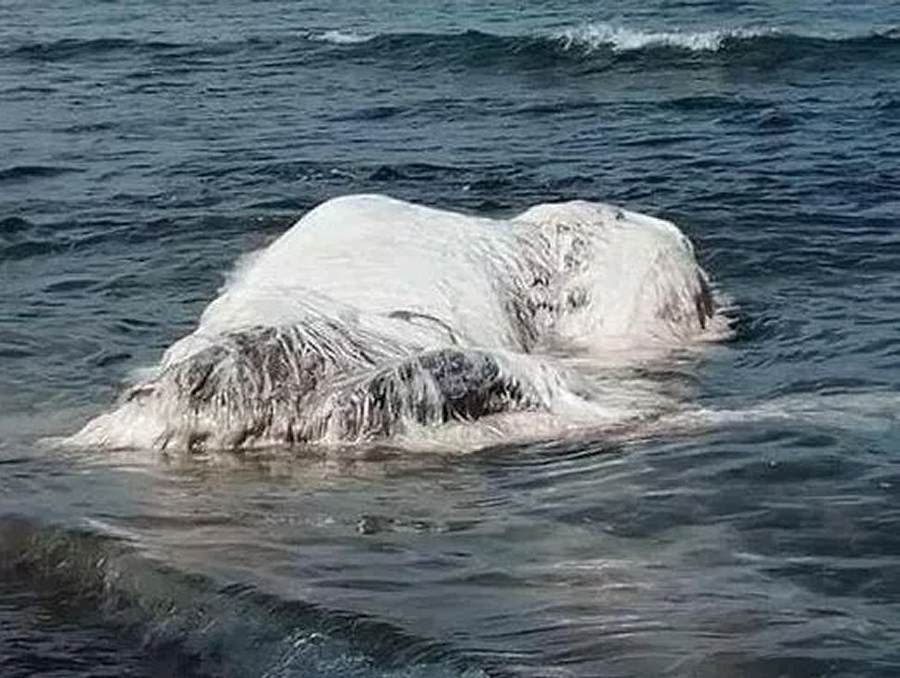 This “White Monster” appeared on a beach in Cagdianao, the Dinagat Islands this week. The news of the creature run as a shock wave over the island. There was speculation it was washed ashore because of tremors related to an earthquake. 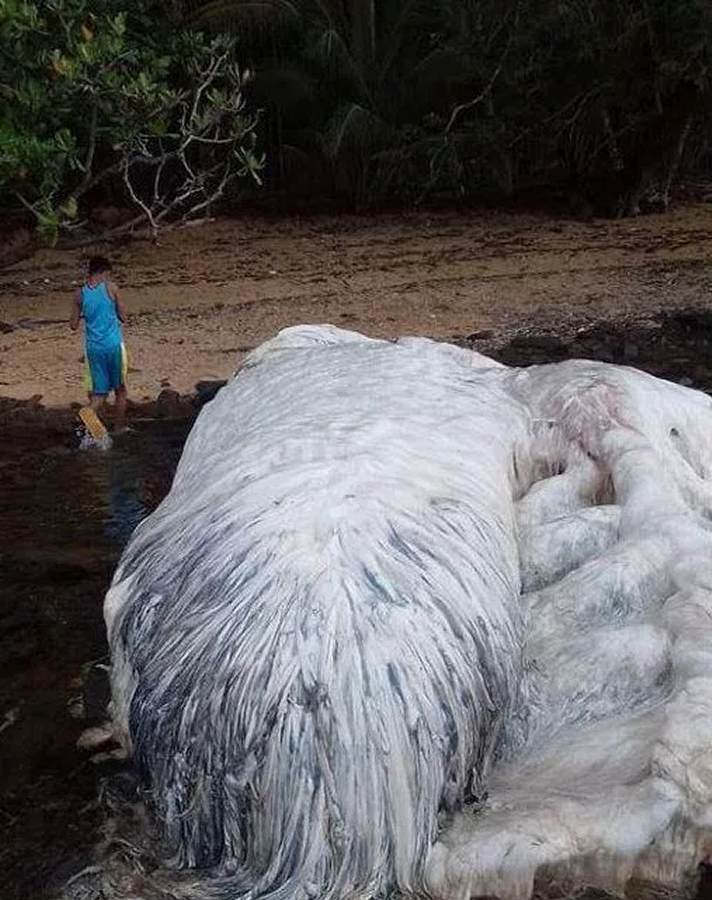 Some speculated it was a sea cow, or a Dugong. Others said it looked suspiciously like an old English sheepdog. But after an investigation on Thursday, Filipino officials revealed it is the carcass of a whale. Weighing approximately 2,000 kilos, it’s believed to have turned white due to decomposition. Why did it suddenly come to surface? 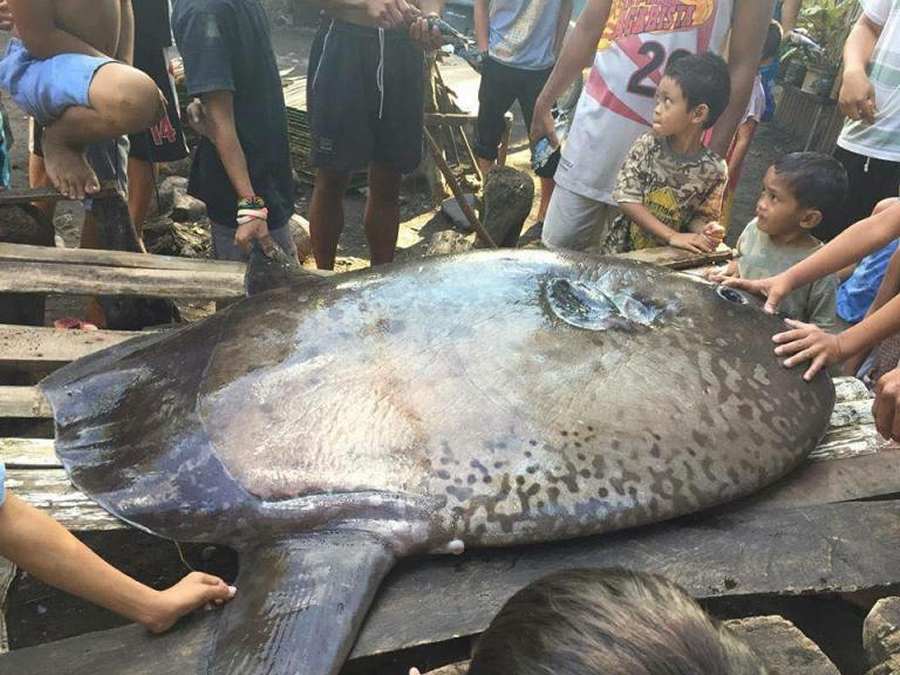 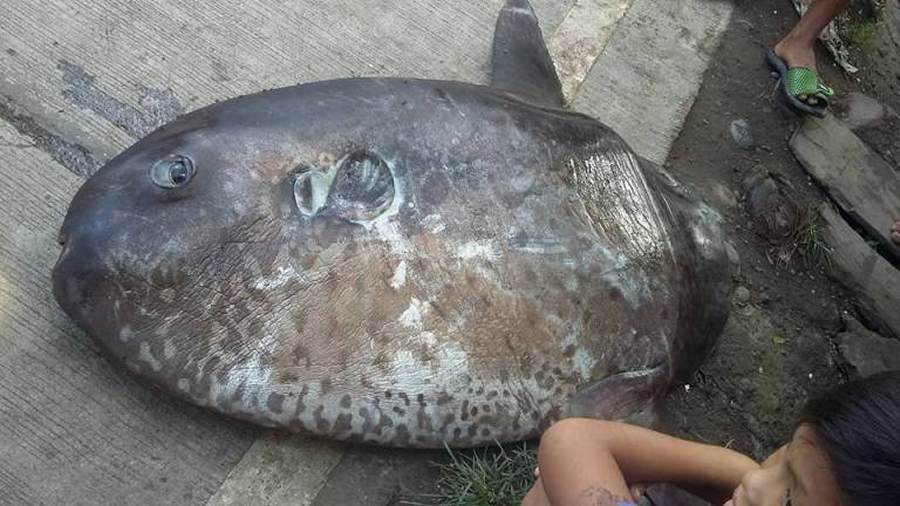 Adult Sunfish live in deep waters of 600 meters (2,000 ft) and even deeper. Why did this guy come up and shock the villagers?

Bohol Sea Monsters – are they a warning?

In another earthquake prone country, Japan, the Oarfish is called “Messenger from the Sea God’s Palace”. Dozens of the deep-sea denizens were discovered by Japanese fishermen around the time a powerful 8.8-magnitude earthquake struck Chile in March 2010.
Kiyoshi Wadatsumi, a specialist in ecological seismology, told the Japan Times, “Deep-sea fish living near the sea bottom are more sensitive to the movements of active faults than those near the surface of the sea.”

Many other animals show strange behavior when they sense unrest in the earth crust.
Among the first scientific studies to document animal behavior before an earthquake comes from Italy, where a team of scientists spent a month investigating the breeding behavior of common toads (Bufo bufo) in April 2009. The toads typically breed in a shallow pool on a lake bed.
But at one point, most of the site’s toads suddenly disappeared — and five days later, a strong earthquake struck the region. The toads returned to the pool once the quake’s last aftershocks occurred. The researchers published their findings in the Journal of Zoology.

[Editor’s opinion:] The erratic behavior of our deep sea fish may be explained. 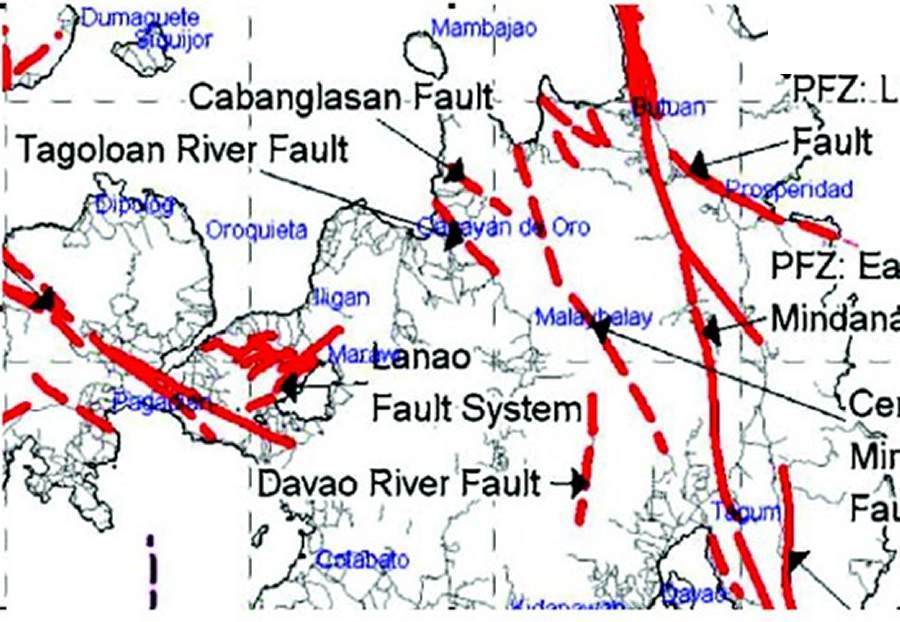 On this map the red Fault Lines end at the coast. Actually these faults continue under the sea, but it is difficult to follow them. In some places the Bohol Sea is over 2,000 meters deep.