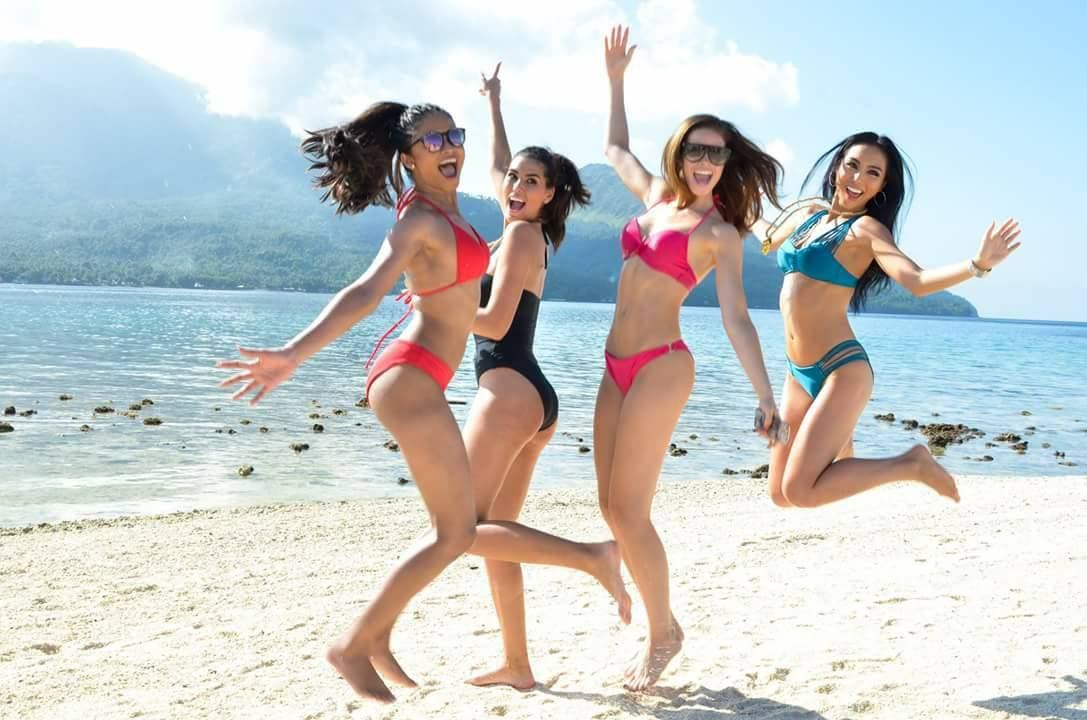 Camiguin 2018 – an equation with hundreds of unknown variables.

2017 had been an extremely turbulent year for Camiguin. After the economic shock caused by the Marawi unrest, the island’s tourism industry began to recover in the last two months. And in the last two weeks a whole bunch events kept the island vibrating. This is what happened in chronological order:

On Friday December 1 short after noon the first flight of PALexpress PR2929 landed in Mambajao. So we have now at least two daily flights between Cebu and Camiguin. And CEB schedules even a second flight per day in the afternoon. But this flights will only come to Camiguin on particular days and unfortunately UFN – Until Further Notice. But keep on reading, there comes more. 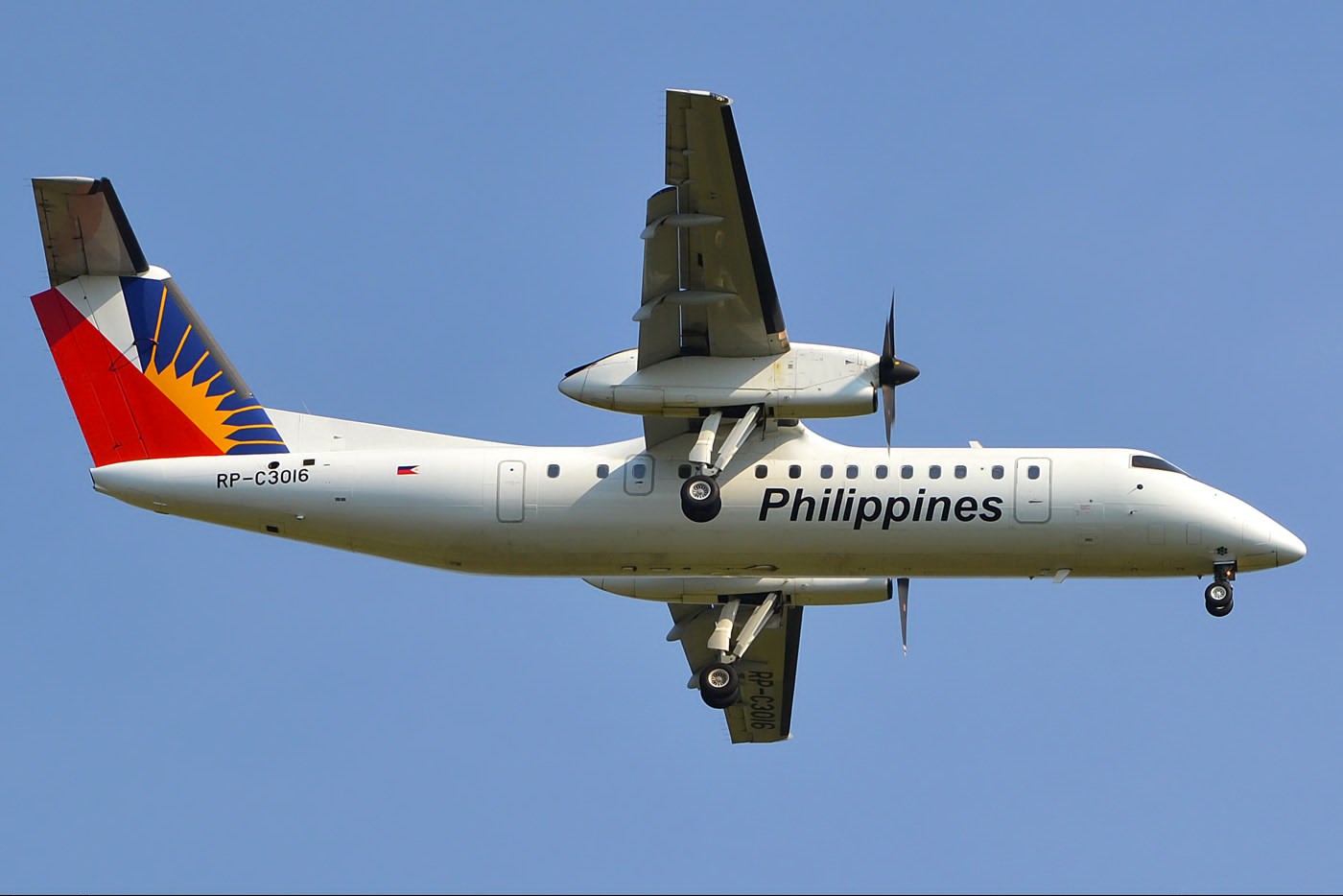 Above photo shows a PAL Bombardier Q 300. The route Cebu-Camiguin is served by PALexpress.
PALexpress – to continue in Camiguin 2018

December 8 – a “Jumbolino” on the tarmac

In my former life I often flew with the “Jumbolinos” of Crossair. “Jumbolino” was the nickname passengers and crews gave to the BAe 146. Such a small plane with 4 jet engines. So, last Friday a cousin of the LX Jumbolino stood in Camiguin. INCREDIBLE! 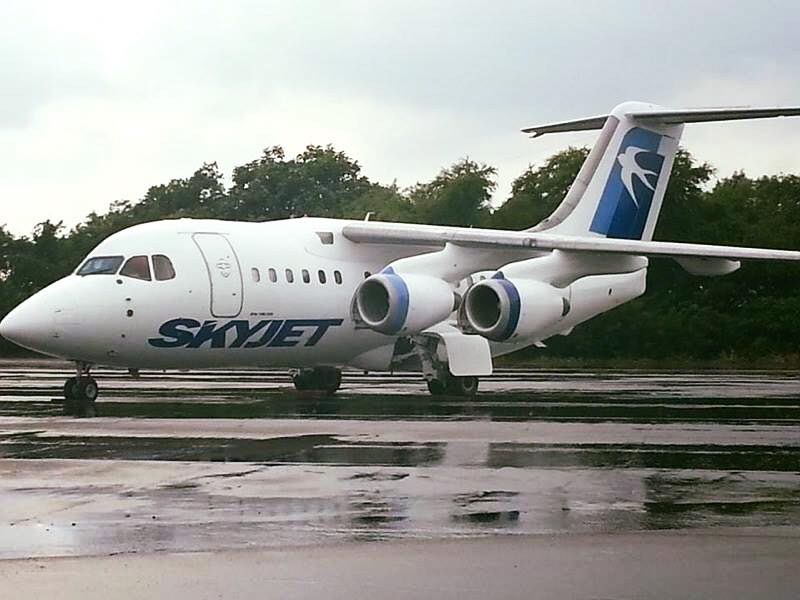 And even more INCREDIBLE out of the bird came one beauty after the other. They are all candidates of the title “Miss Universe”. Here is Miss Italy, Maria Polverino. 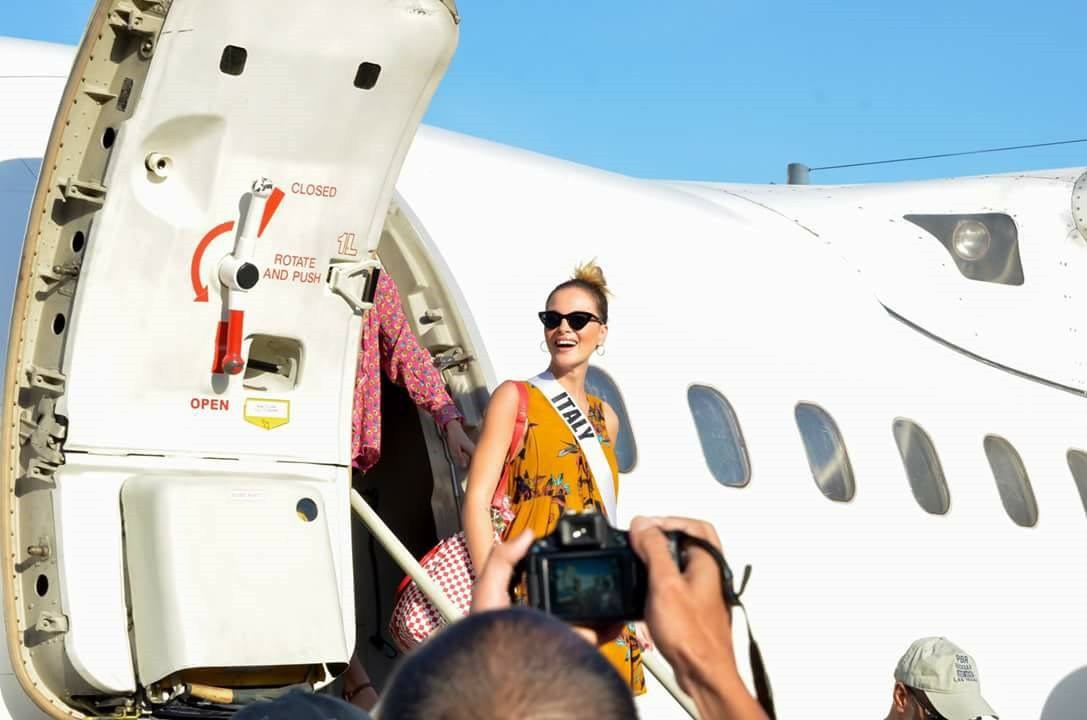 Skyjet – to continue in Camiguin 2018

Skyjet announced that this flight was only the inaugural direct flight from Manila to Camiguin. They will start regular scheduled flights in 2018. Some sources say from February. Other sources announce April or May. Skyjet already flies to Siargao island that has a similar infrastructure and tourism industry as Camiguin has. Siargao is surfing – Camiguin is diving. Follow Skyjet here. 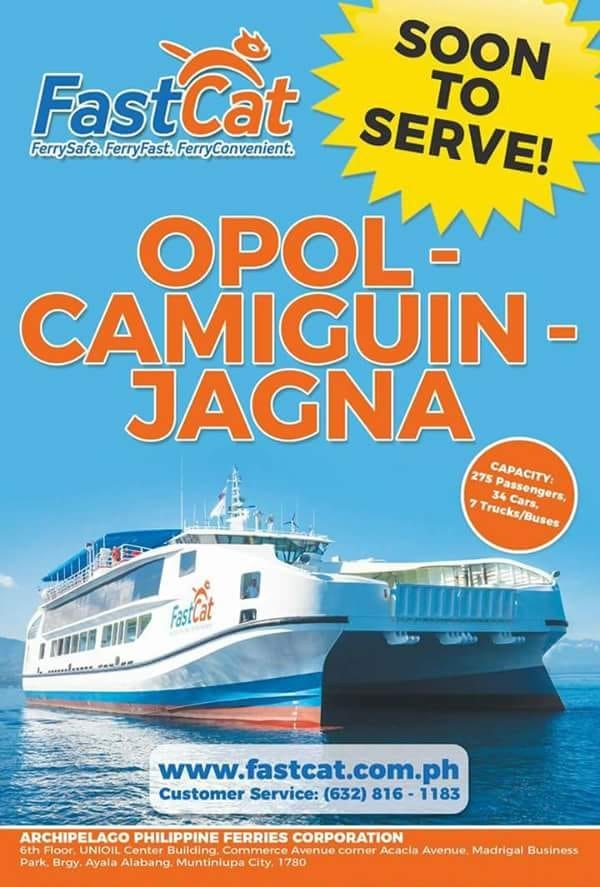 FastCat – to continue in Camiguin 2018

It’s now really only a question of some days until FastCat arrives in Balbagon port. One of the important things had been the installation of the ramps in Opol and Balbagon. Look at the photo above. The usual ferries her in Camiguin have a high front or back door. The doors of the FastCat ferries are much lower, but wider. Therefore the ports need to be equipped with ramps. This job had been done yesterday in Balbagon. Below three pictures from Philip Sykes, Golden Sunset Beach Club.

Most sources say that FastCat will come the first time to Camiguin on December 16. We doubt a bit because they first have to paint the ramp 😛 Anyway, the FastCat ferry will come and hopefully will mix up the current monopoly of rusty ferries.

And on the island?

The Gaisano mall is growing

The first shopping mall ever on Camiguin island, the future Gaisano mall in Mambajao is growing. Currently they are building the scaffolding of 3rd or 4th floor.  The number depends on where you start to count. An opening date is not yet known. Usually buildings in the Philippines open floor by floor. The picture below shows an earlier construction status. Today the workers are are 3 levels higher. We think that local people will enjoy City feeling in 2018. This shopping mall will create a similar paradigm shift as did the arrival of the Spaniards some centuries ago. I wonder about the outcome. 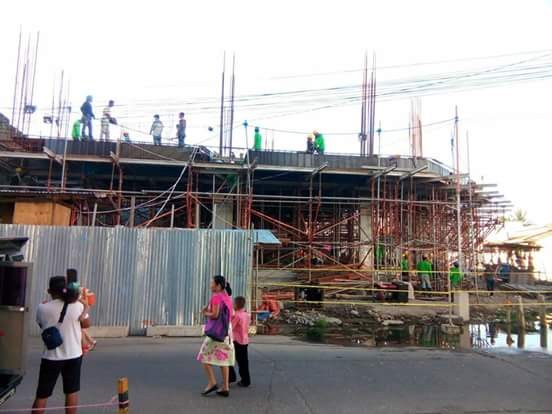 Two prominent hoteliers in Cagayan de Oro will be putting up their facilities on Camiguin island. A hotel owned by Limketkai will stand in Barangay Tupsan Pequeño, Mahinog town. Mallberry will expand its hospitality business on the other side of the island in Barangay Bonbon in the municipality of Catarman.

The construction site of the Limketkai resort has already begun and is progressing. The Mallberry hotel in Bonbon caught me ice-cold. I’ll check tomorrow. 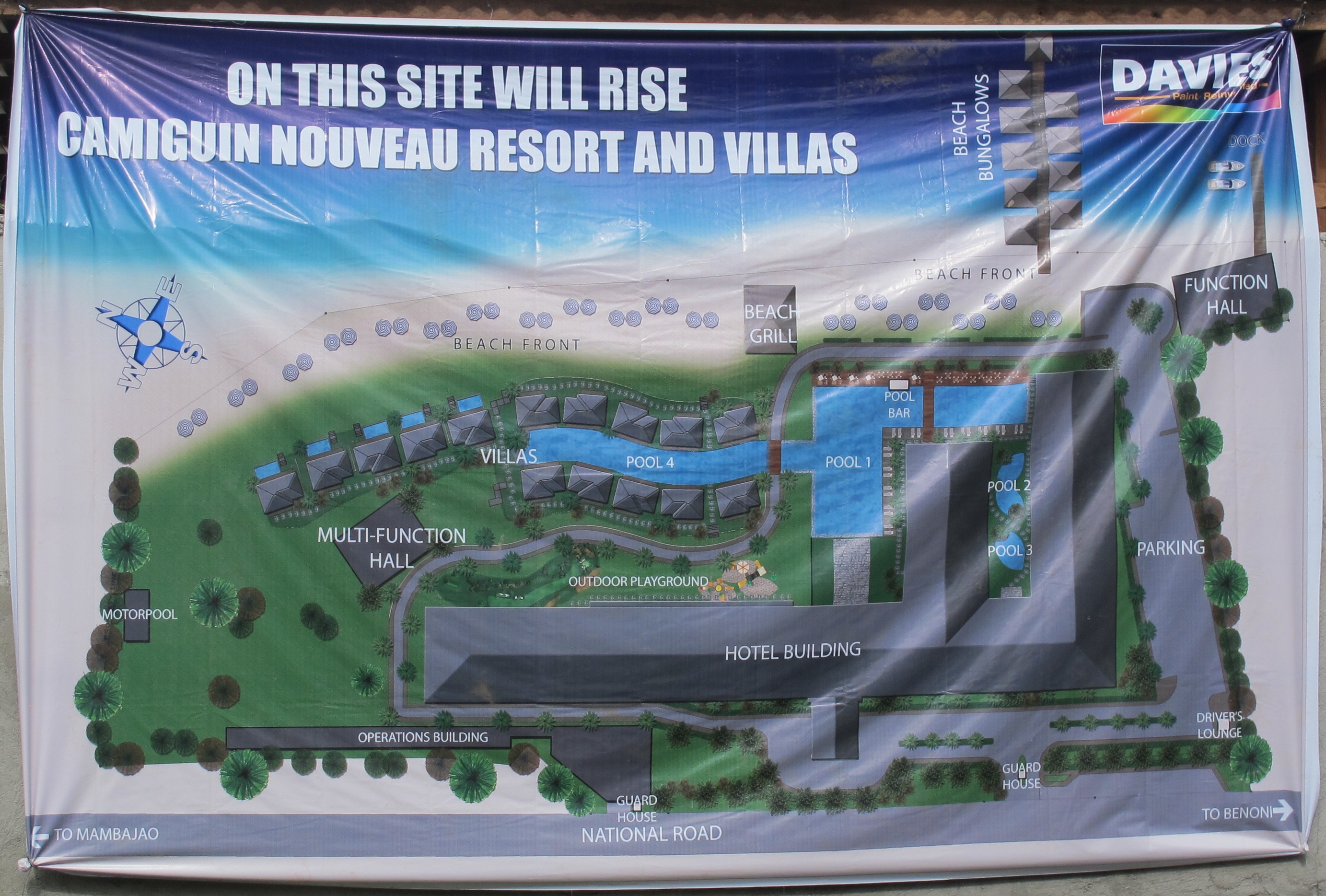 There are also whispers about a Swiss hotel deal in Agoho. But some legal title quarrels still seem to occupy negotiating partners.

This had been the boom, for now. Now let’s have a look at the bubble.

While tourism marketing made big steps ahead, local infrastructure management  is still unearthly. Internet at 8 kbps. Power at 190 Volts maybe. Concrete roads are built out in the bush but not accessing beautiful beaches.  Greetings from Cantaan, Kabila White Beach and Agoho, Paradise Beach.

Did you know that pee and poo of almost 100,000 people flow out in the nature and finally in the sea? This are every day about 45 metric tons of feces and 170,000 liters of urine. This might be OK in sparsely populated areas. But what about Mambajao and the towns and villages on the coast? Did you know that almost each barangay has its own water supply? In case of drought they can’t help each other because there are no boundary crossing pipes.

This island lacks of real professionals. I already wrote this sentence some years ago. It had been heard for what belongs to tourism. Maybe it will be heard and understood again when it comes to infrastructure.

This article had been written and published with 100% solar energy – in spite of thick clouds and rain all day.