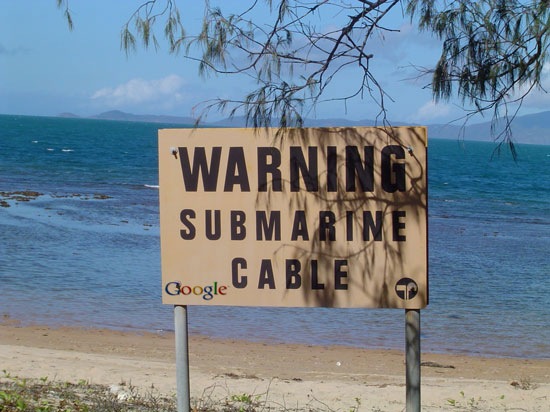 Two years ago Google together with other five associates started the project “Unity”, a trans-Pacific undersea fiber-optic cable linking the United States and Japan.
The investment costs were $300 million and became necessary as the demand and the current capacity of the trans-Pacific cables tent towards an imbalance. It appears the Internet giant’s desire for infrastructure investments is growing or should we say hunger for domination.

And now Facebook mimics Google with their own Underwater Cable to Asia!

On Thursday, Facebook confirmed that it’s pitching in on a new 10,000-kilometer undersea fiber optic cable that will link Malaysia, Korea, Japan, and several other Asian countries by October 2014. The story was first reported on Wednesday by Commsday.

In buying a ticket with the Asia Pacific Gateway — the consortium that’s building the submarine cable — Facebook says it will be able to “provide a better user experience for a greater number of Facebook users in countries like India, Indonesia, Malaysia, the Philippines, Hong Kong, and Singapore.”

Facebook doesn’t say how many users they have in Asia, but many of these countries represent promising new markets to the company. And if you peep in an internet-café in the Philippines, you see hundreds, thousands, nu hundred thousands of Pinoys linked in Facebook. The problem is that it can be expensive to move data around in Asia. Facebook seems to be looking to cut costs by getting control of its own fiber optic links, something that Google has also spent millions on in recent years. Facebook said on Thursday that it has no plans to build data centers in Asia, so the Asia Pacific Gateway could be very important as it tries to woo users.

[Editor’s comment:] The problem is again the last mile. In the big cities with their business and data centers, you will get a faster access. But on the smaller islands and remote regions you still feel like on an old steam-ship. The reason is simple: SMART and GLOBE do not invest in these places. Camiguin has an overall link speed of 64 Mbps. This allows 32 users to stream movies at 2 Mbps. Below this speed you get a lurching movie.