Considered by many to be the most beautiful  sea turtle for their colorful shells, the Hawksbill is found in tropical waters around the world. They spend their time in coral reefs, rocky areas, lagoons, oceanic islands, and shallow coastal areas.

Named for its narrow head and sharp, bird-like beak, Hawksbills can reach into cracks and crevices of coral reefs looking for food. Their diet is very specialized, feeding almost exclusively on sponges. One of the smaller turtles, adults weigh between 45 – 90 kg  and reach 50 centimeters to 1 meter  in length.

Hawksbills are considered Critically Endangered around the world by the IUCN Red List.

In Camiguin the undisturbed beaches of Barangay Baylao and Kuguita near Mambajao town are now the new found haven of the Hawksbill sea turtles. While this turtle lives part of its life in the open ocean, it spends more time in shallow lagoons and corals, a vulnerability that pushes the local government, to affect a strong conservation program on the critical habitat.

Last February 15, the local executives have released the first batch of new hatchlings to the sea in the shoreline of Baylao. Some 63 baby turtles were released.  The local government has also launched a campaign to educate the locals and become active partners in preserving the specie, often traded by fishermen for decorative purposes. 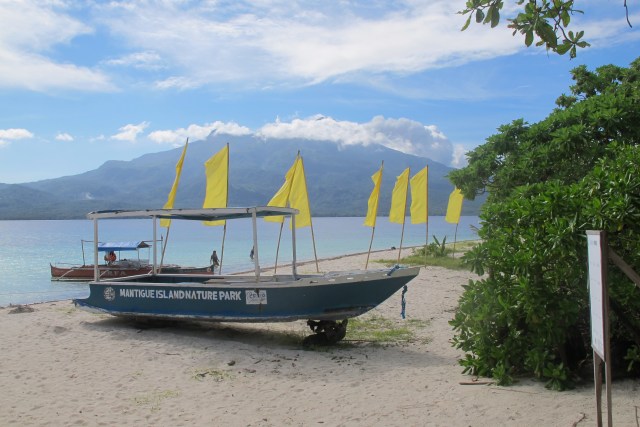 Meanwhile, another awesome option for those who wanted to see and swim with the turtles is the protected marine sanctuary in Mantigue Island (part of Mahinog town), where turtles playfully swim with the people around.

[Editor’s comment:] Years ago, when I still lived in a little cottage on the sea shore in Bolok-Bolok, Mambajao, I met such a turtle. One evening, sitting on the veranda, I saw something big coming out of the sea. With a strange feeling in the belly I approached this big dark thing and found it to be a sea turtle. Unfortunately I went to near the animal, so the turtle decided to go to a “less crowded beach”. Since then I have seen those turtles several times on Mantigue Island. All you need is snorkeling gear and float quietly on the water. With a bit luck you will meet one of these wonderful creatures.