November – the haunted month of DoT

Do you remember November last year? The DoT launched their worst campaign ever:

And now, it’s again November, they are up to make again another big error:

ABS-CBN wrote yesterday:
The Philippines as a divorcee haven? In an effort to lure more long-staying tourists in the country, the Department of Tourism (DOT) is developing the Philippines as a destination for divorcees or those trying to recover from broken relationships.

Tourism Assistant Secretary Domingo Ramon Enerio III said those running away from domestic turmoil are among the target markets of the DOT for its long-stay tourism program.

“At this time, the Philippines is among the few remaining countries that still prohibit divorce, so we think this is a big market that we hope to tap,” he said.

“If we can be a wedding or honeymoon destination, we can be vice versa and become a destination for those in search of personal fulfillment, including those… in flight from domestic turmoil,” he added.

He said the Philippines can offer both relaxation and adventure to these tourists.

“Our destinations can provide them the relaxed and calm surrounding that they are looking (for), or if they want adventure, we can also offer it to them,” Enerio said.

The full article is here

When you read this sentence in an isolated way: “Our destinations can provide them the relaxed and calm surrounding that they are looking (for), or if they want adventure, we can also offer it to them”, then you can agree with it. But when you read the whole paragraph, then you could or even must think of this kind of tourism: 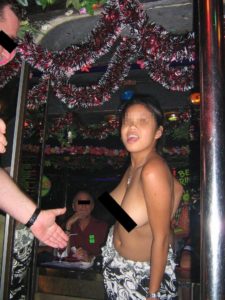 Is there somebody with a working brain in the Department of Tourism?