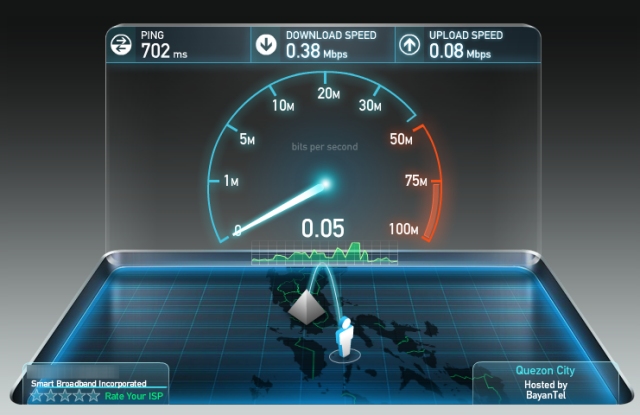 Philippines Internet – Fairy Tales. Quality and availability of Internet access in the Philippines is the worst all over South East Asia. The 3 big telecom companies invest billions in advertisement. They tell the customers fairy tales about speed and availability. The realty is light years away from their promises.

Philippines Internet – This is our own weekly statistics

This statistic only shows the availability – not the speed. There is not one day without interruptions. And the chart does only show interruptions lasting longer than 30 minutes. There are also lots of short interruptions that cause our network to restart and to reconfigure. The monitoring is done from Sweden because we are feeding ADS-B signals to flightradar24.com. We”ll write about this service in another article.

The Inquirer published several articles about Internet in the Philippines. The last article had been published on July 26. Unfortunately they do not publish how they measured. The chart below indicates an average download speed for the Philippines at 3.4 Mbps. If they measure this speed on computers linked to a fiber backbone within Metro Manila, then the result might be possible. But if they measure all over the country, they would never get this value. 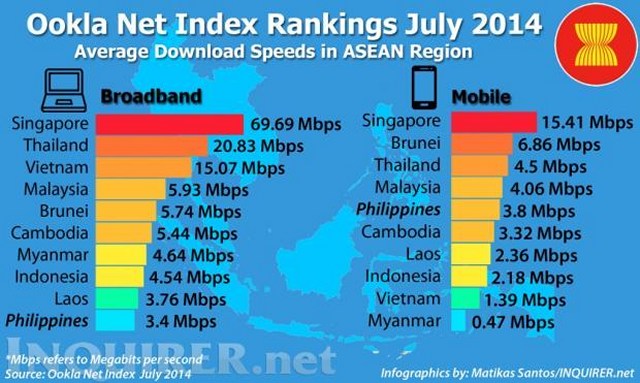 I just did some tests while writing this article. The first test had been between our office in Camiguin and Bayan Tel in Quezon City. Here is the result  😯

Only to contact the server in Quezon City over SMARTbro, we needed 702 milliseconds (nearly 3/4 of a second). Download speed on this short distance was 0.38 Mbps. Upload speed had been a horror trip with 80 Kbps.

I then tried connections from our network to servers abroad. SMARTbro could not contact the servers in Chennai (India) and Geneva (Switzerland). So we switched to PLDT. Over the PLDT network the test with Switzerland was interrupted after 50% test time. The test with India had been better than with Quezon City:
Ping: 281 ms, Download: 0.77 Mbps and Upload: 0.68 Mbps.

The 3 big telecom company advertise everywhere and in giant quantities. They reach about hundred million people with their ads. 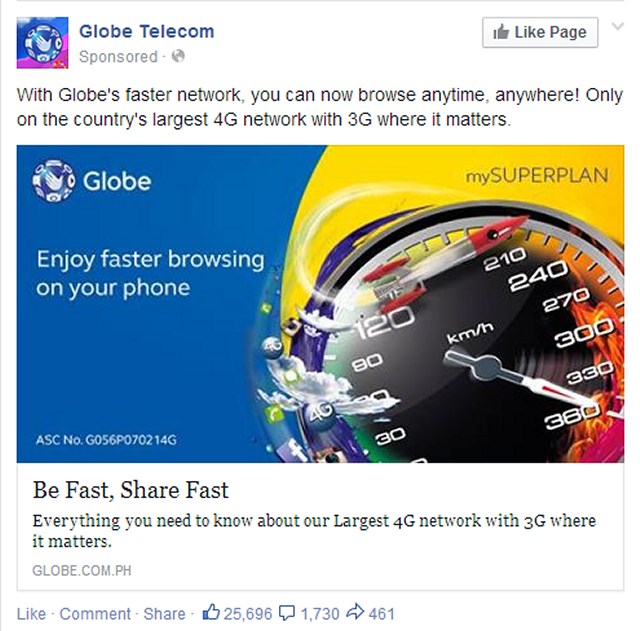 But only a theoretical 10 percent might use their fast G4 (LTE) services. They even say it themselves: Only on the country’s largest 4G network with 3G where it matters. What does this mean? I checked Globe’s 4G coverage. The map seems to be empty. No signal? 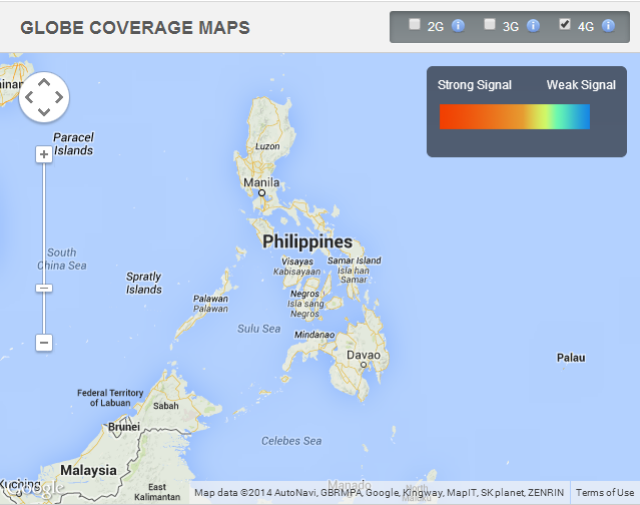 What Globe doesn’t say in the advertisement is the fact that 4G (LTE) is only available in some specific places in Metro Manila and Angeles City. And many, too many, people buy an expensive LTE ready cellphone or a LTE/4G pocket modem and subscribe to an expensive plan. All they get is maybe 3G, maybe. 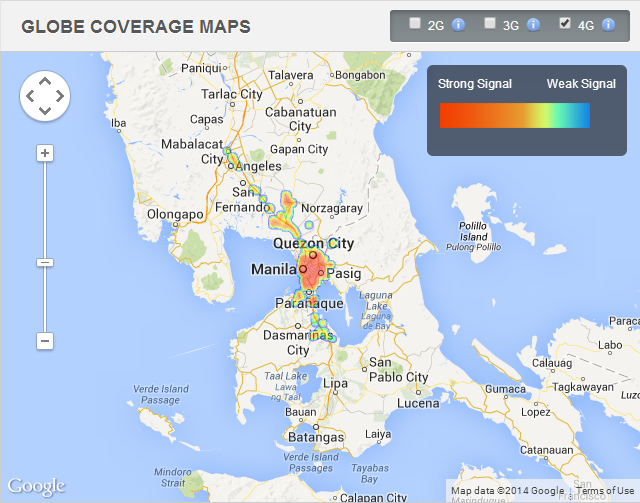 Globe’s 3G network is not as “global” as the brand name makes you think. The map below shows the spots, where 3G should be available. 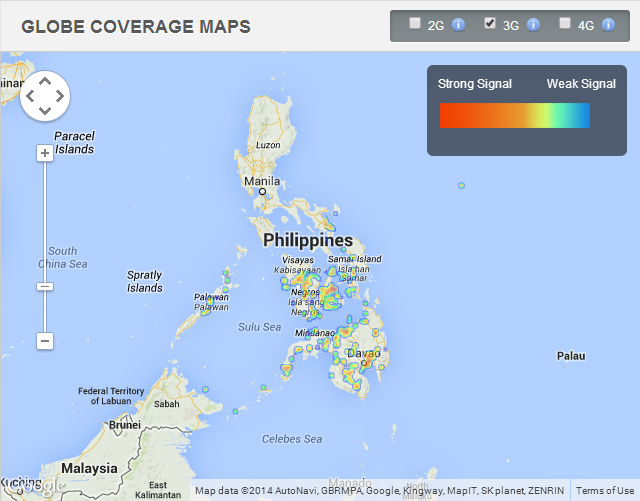 Northern Luzon, the eastern Visayas, Palawan and large parts of Mindanao are even not covered by their 3G (UMTS) network. Now it gets very slow, because the rest of their coverage, not the country at all, is only 2G or GPRS. GPRS can give you in the very best case 236.8 Kbps. But often one gets only 80 to 117 Kbps. With this speed you have to wait about 20 seconds for the map below to appear on your screen. (With 4G it would need less than 0.001 seconds). 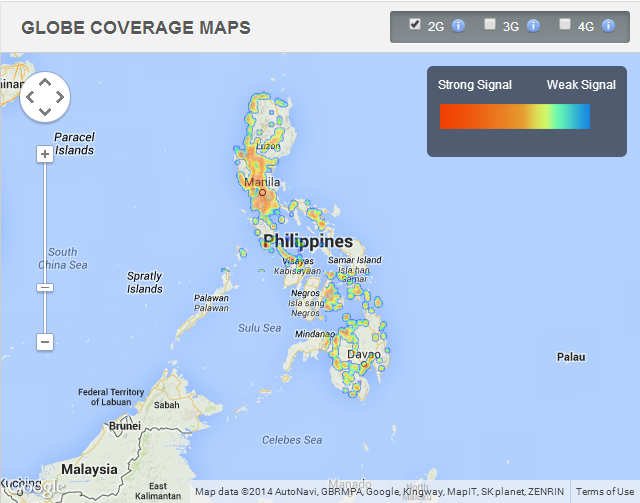 What I wrote above does not only concern Globe. The two other bic telecom companies in the Philippines, Smart and Sun do have exactly the same behavior and similar network density.

The telecom companies build their own infrastructure from international undersea cable connection sites to the network of cellular towers scattered throughout the country. At present, PLDT has four connections to international cables while Globe has two giving the whole country a 2 terabit per second connection to the rest of the world.

The main challenge is in the Philippines’ dispersed nature of 7107 islands which creates constraints in the expansion of the networks to the provinces and municipalities far away from the main urban centers. Building the infrastructure to provide connectivity to the far-flung areas is very expensive while the rural market may not provide sufficient revenues for the telecom companies.

The telecom companies focus on the country’s economic center – Metro Manila. There they can reach the companies that need the speed and can pay the high rates. These companies work like magnets on young professionals. In the province they do not find employers that satisfy their thirst of experience and curiosity. They do not find a well paid job that gives them a chance of personal and social development. These young people go to Manila.

Result 1: Manila is growing disproportionately. Infrastructure and living costs explode. These high costs swap out in the provinces, where people suffer of high prices and low income.

Result 2: All those intelligent, curious and thirsty people lack in the provinces. It is not only their professional knowledge that is missing. Their high social competence leaves the provinces and islands with them.

If there were reasonable Internet speed and secured power supply, many companies would think of building their head offices, research labs, call centers and more somewhere in the provinces. Leasing of office space would be much cheaper. Living costs for the staff would be much lower and quality of life would be much higher. Result: Productivity would be higher at lesser costs. But there is no usable Internet for now.

Who is to do the first step? I think it could be the telecom companies. The PLDT group incorporates 23 companies directly and hundreds by participation. The Globe group is in the hands of the Ayala Corporation and Telecom Singapore. The Ayala Group owns or controls hundreds of companies nationwide.

Either of these economic giants could create a big business park with apartments and shopping malls anywhere in the Philippines, provided that they get secured electricity and are linked with a really high speed network to the Internet. . Why not build such a concentration in Kalibo on Panay island or in Legazpi or Naga in Bicol. They could even go more remote to cities like Laoag in the north or General Santos in the south.

As the title said, these are Philippines Internet – Fairy Tales. It is in the hands of the young people to take the development in their hands.