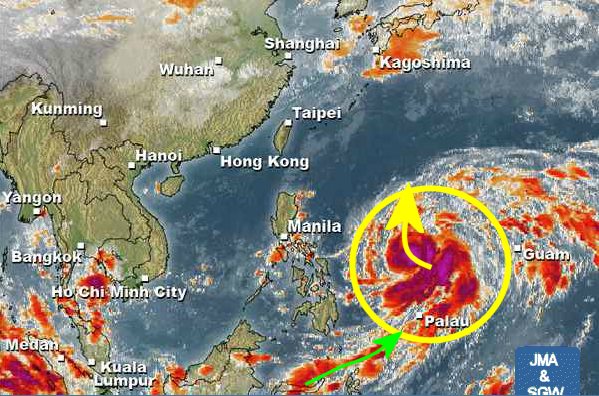 Severe Tropical Storm NURI / Paeng is intensifying rapidly while turning northwest to north. The satellite clearly show the begin of the spinning winds. NURI / Paeng is expected to get typhoon strength around 3 a.m. tonight.

Severe Tropical Storm NURI / Paeng is really near. The center is about 900 km east of Virac, Catanduanes. The south-western trough (green arrow) is still south of Mindanao but will move north together with NURI / Paeng. This will bring cloudy and rainy weather late tomorrow and Monday. There are no warnings for the Philippines. NURI / Paeng is expected to get typhoon strength when passing over very warm sea-surface temperatures (higher than 28°C).