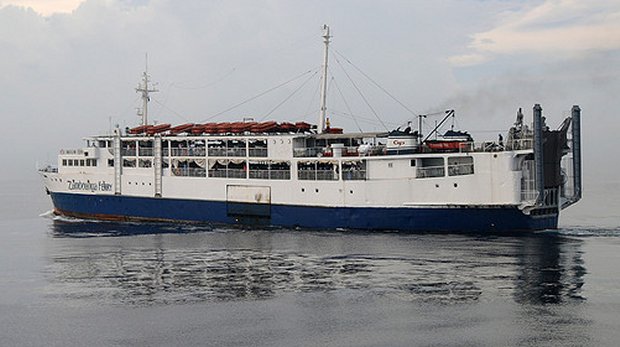 Tropical storm SONAMU/Auring, the first weather disturbance of the year, slammed across Davao Oriental at midnight Wednesday and plodded across Northern Mindanao on its way out of the country Friday night.

The RoRo ferry “MV Zamboanga” of  Cebu-based George & Peter Lines arrived from Zamboanga City and was docking at the Dumaguete port yesterday about 9 AM when the winds blew it toward the seafront Rizal Boulevard.

The ferry was attempting to dock at the Dumaguete port at 9 AM when strong gusts of wind estimated to be 34 kilometers per hour cut the mooring tiles. The winds and waves kept pushing the vessel towards the pier.
To avoid collision with the pier, the captain decided to maneuver the vessel out of the port area and  wanted to wait there until it was safe to dock.
Unfortunately, strong winds pushed the vessel out to the Boulevard area where it is at present so they had to anchor down and quadruple-tie the vessel to Pier 6 to avoid hitting the Boulevard.

It took rescuers seven hours to bring 194 adults, 11 infants and 23 children to dry land on board life rafts.  All passengers had disembarked to safety by 4 PM.

The low pressure area developed into a tropical storm and placed Dumaguete and the southern part of Negros island as well as Siquijor under Storm Signal N° 1 at 10 AM.

We continue to track this storm. Please see here