At 10:36 a.m. yesterday, Sunday morning, a strong M  6.0 earthquake marked the start of a long series of quakes and aftershocks. Up to now (Monday 10:15 a.m.) we already count over 30 underground tremor. The focuses of these earthquakes are near the surface. The depth varies between 1 and 24 kilometres.

PHIVOLCS reports say that the initial quake was felt at Intensity 6 in Talacogon; Intensity 4 in the cities of Butuan, Tagum and Bislig, and Hinatuan, Surigao del Sur; Intensity 3 in Gingoog, Balingwan and Balingasag in Misamis Oriental and Davao  City; Intensity 2 in  Cagayan de Oro City, and Intensity 1 in Kidapawan City.

Strong Earthquakes in one Point 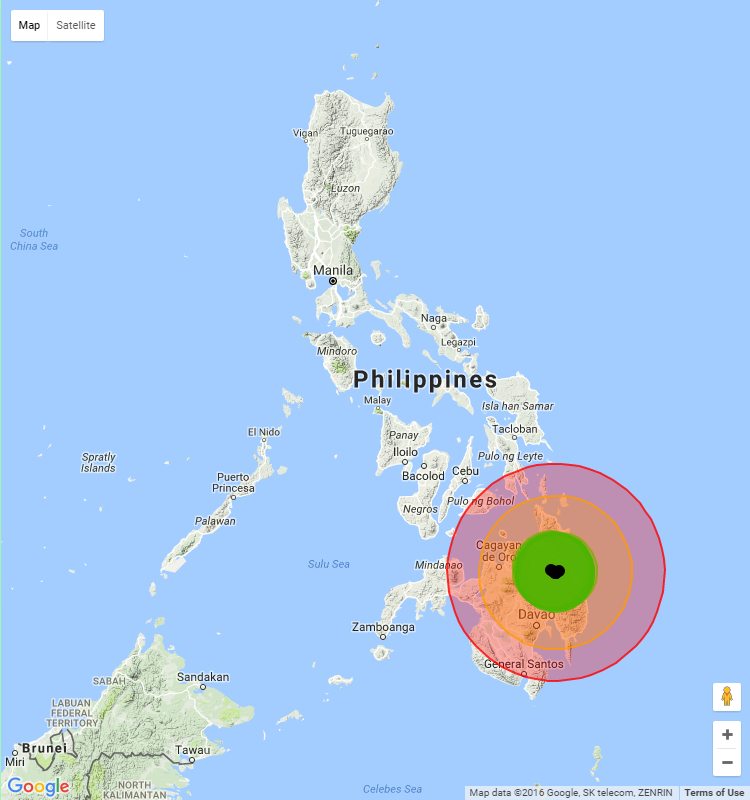 Our Earthquake map looked really strange this morning. The red circle shows the initial M 6.0 shock. Within the circle the quake could be felt at intensities between 0 and 6. The orange circle shows the strongest after-shock at 3:54 p.m. yesterday afternoon. It had a Magnitude of 4.6. The green circles show the multiple weaker after-shocks.

Since 2011 we record all earthquakes in the Philippines and plot different maps. These earthquake maps are here.

The Region of Agusan del Sur 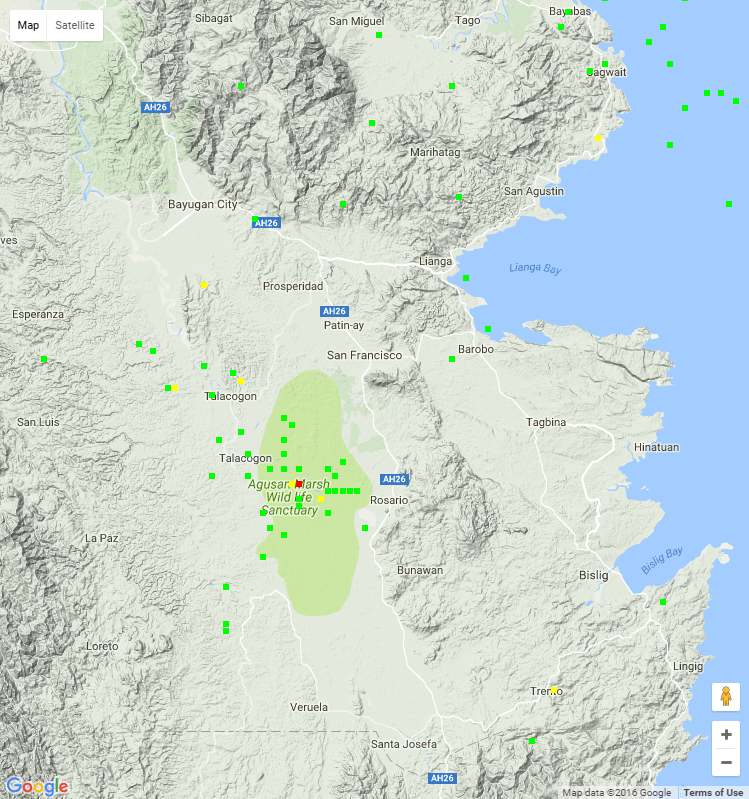 The marsh lands of Agusan del Sur are known to be the home of the Philippine crocodile. Last summer Jayvie Piamonte had written a very interesting article about this region.

The series of Strong Earthquakes lays within the Agusan Marsh Wildlife Sanctuary. Fortunately this region isn’t densely  populated and houses are mostly built of wood and bamboo. This construction style is so flexible that the structure moves like a boat on the waves. The whole house is deformed but does not crack.

The last tremor was recorded this morning at 04:55 a.m. near Rosario. With this series the number of earthquakes in the Philippines climbed to 2,014 this year. We count an average of 8 quakes per day. The average magnitude is 2.9 and the average depth of the focus is 34 kilometres.