Stuck on the island !

Two days ago I wrote about the “one or two aircraft airlines“. When their bird is due for an A,B or C check, then you stick on your vacation island with a ticket and a cancelled flight. 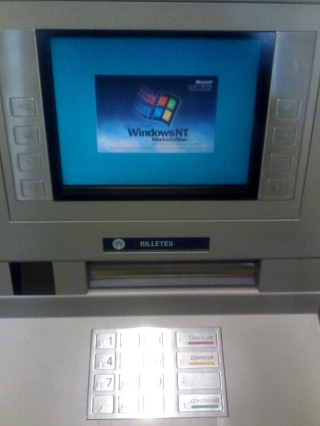 A similar problem happened today to an Australian tourist in Camiguin. No, not with THE AIRLINE, but with the banks. Although Camiguin has 4 ATMs (3 in Mambajao and 1 in Catarman) all the Mambajao ATMs were down.

The PNB ATM showed a strange new menu, opened and close the money slot and then displayed that it could not give money. The Aussie tourist (and I) did not get a Piso.

Next step was LANDBANK in Mambajao. Already the big crowd in front of their two ATMs had not been promising. We (the Aussie and I) first queued up. But after a while I overtook everybody to have a glimpse on the ATM.
The first one was just rebooting showing the “Windows NT workstation” welcome screen. Windows NT ? What century are we living in?
The second one showed some Landbank message, saying that there was no money. Where? At Landbank or in the ATM?

My new Aussie friend got desperate. He had to catch the 4 o’clock fastcraft to Cagayan de Oro and had not enough money in cash. I gave him my last 1000 Peso bill and hopefully my e-mail address.

But now I am stuck on the Island! Fortunately it’s Camiguin, the most friendly Island in the Philippines.