Typhoon Lionrock – the strange guy out over the near Pacific

Typhoon Lionrock is a really strange guy out over the Pacific.

The northwest Pacific weather is turbulent for several weeks now. The usual air streams from east (the Easterlies) are perturbed and fringe out towards continental Asia. You can see this strange behaviour on our 24 hours satellite image loops.

Typhoon Lionrock started its journey about 33° north and 145° east. This is a rather strange place for a tropical cyclogenesis. The storm then started to move southwest. The path shows the characteristics of a low energy depression. But arriving in warmer waters, the storm gained power rather fast. 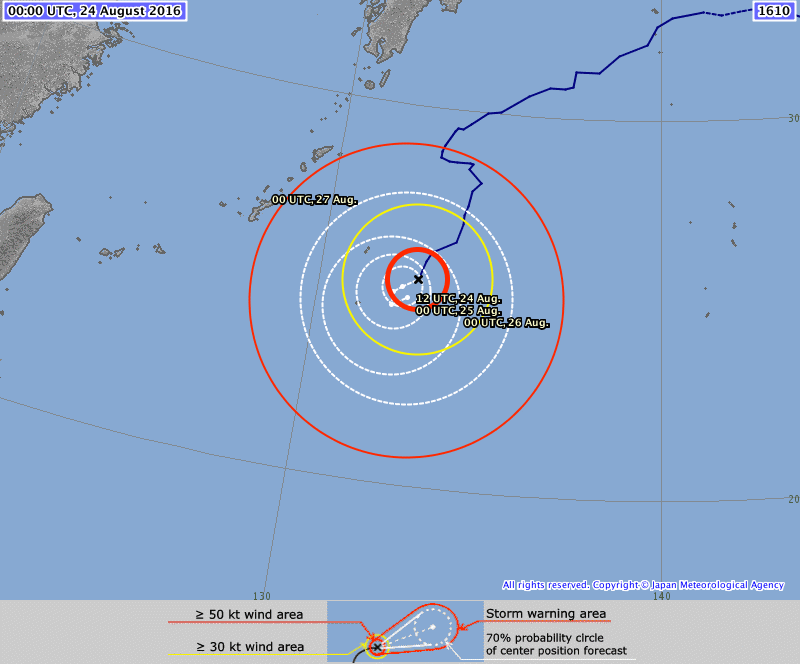 Typhoon 12W (Lionrock), located approximately 274 nm east-southeast of Kadena ab, has tracked south-westward at 8 knots over the past 6 hours.
Animated multispectral satellite imagery depicts a well defined eye feature with a spiral banding wrapping into the low level circulation centre.
The initial intensity is assessed at 75 knots. Upper-level analysis indicates the presence of radial outflow. This outflow has improved in the last six hours due to opening distance from the
anticyclone positioned south of the system.
TY Lionrock is located within a weak steering environment between the dominant western subtropical ridge and eastern subtropical ridge, and is drifting generally south-westward.

Typhoon Lionrock will remain trapped within this competing steering environment while it drifts south-westward.
TY 12W forecast to gradually intensify under favourable conditions to a peak of 85 knots. However, oceanic heat content is low and upwelling due to a period of quasi-stationary motion as the steering ridges shift will prevent further intensification.

Later, the near-equatorial ridge will keep Typhoon Lionrock tracking north-eastward as a deep mid-latitude trough deepens over japan, providing an exhaust mechanism allowing the system to briefly intensify as it moves into warmer waters.