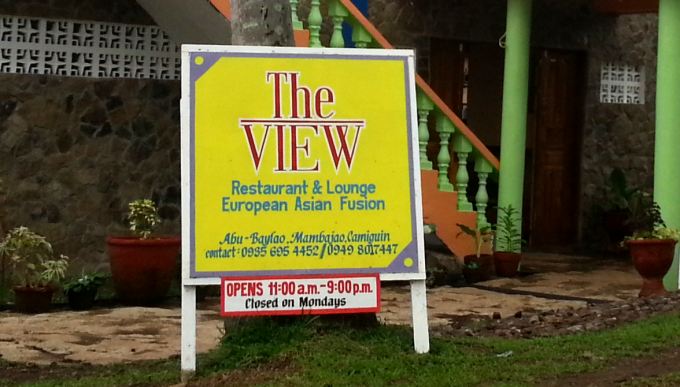 “The View” Camiguin is the newest restaurant on our little island. We went here yesterday. It had been a gray and cloudy day. “The View” and the view had been good.

We think that “The View” Camiguin not only will survive, but might develop well. The owner, Mae Octaviano Cavanah, has already a long experience and her brother is well known for his pizzeria in downtown Mambaja, Perry’s of course, and his outlets in Bug-Ong and Benoni port.

“The View” Camiguin in Baylao 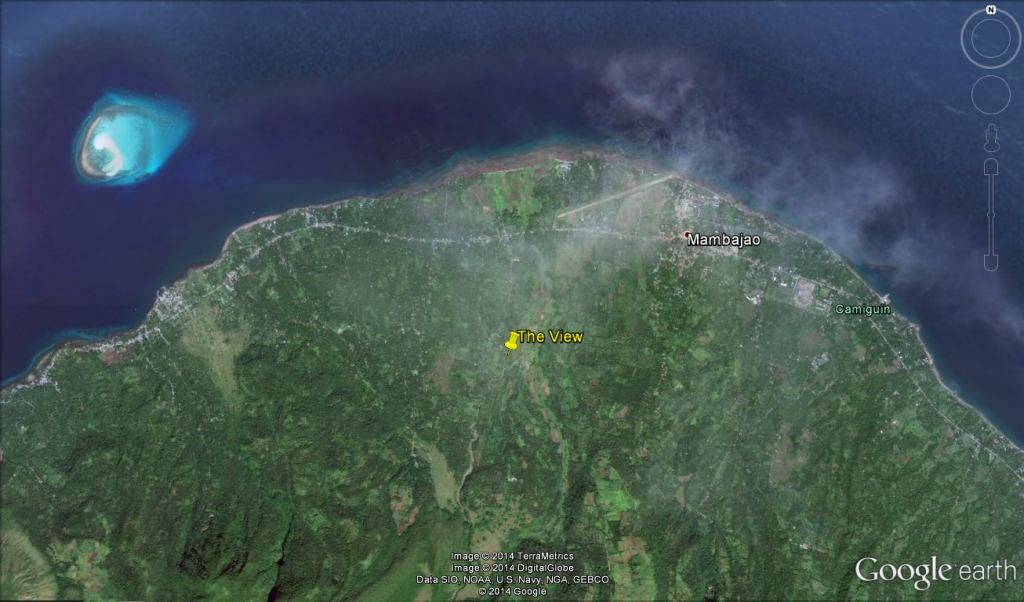 The View is on a foothill of Mount Hibok-Hibok. It is easily reachable by car, motorbike or motorela from the coastal road. Coming from Mambajao, take the first road left going up to the Ardent Hot Springs. After a view hundred meters on the concrete road, you see a yellow street sign that tells you to turn left. There follow 250 meters of mud road. 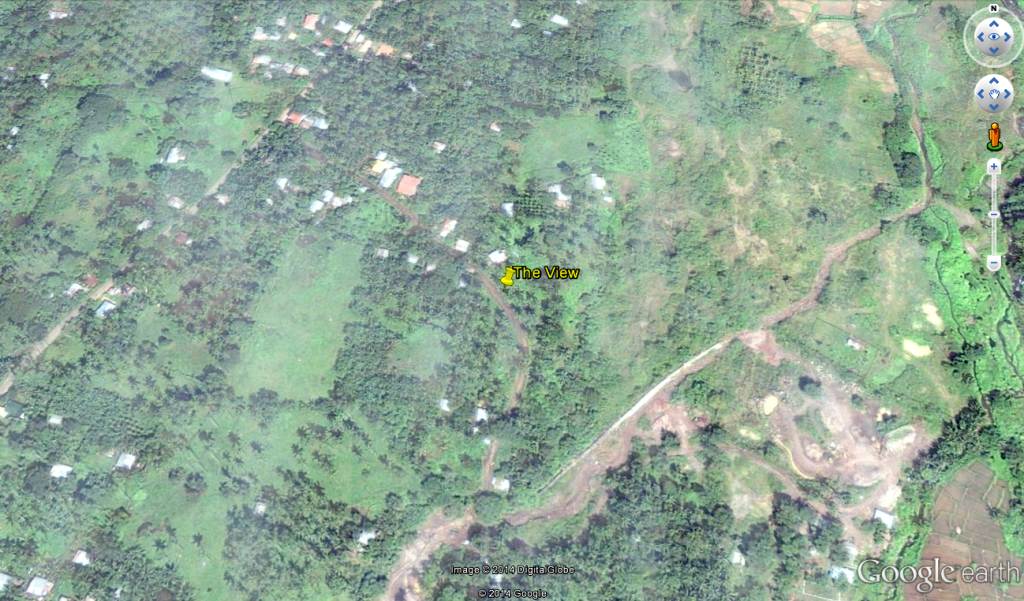 You can’t miss the restaurant. It is painted in vivid colors. 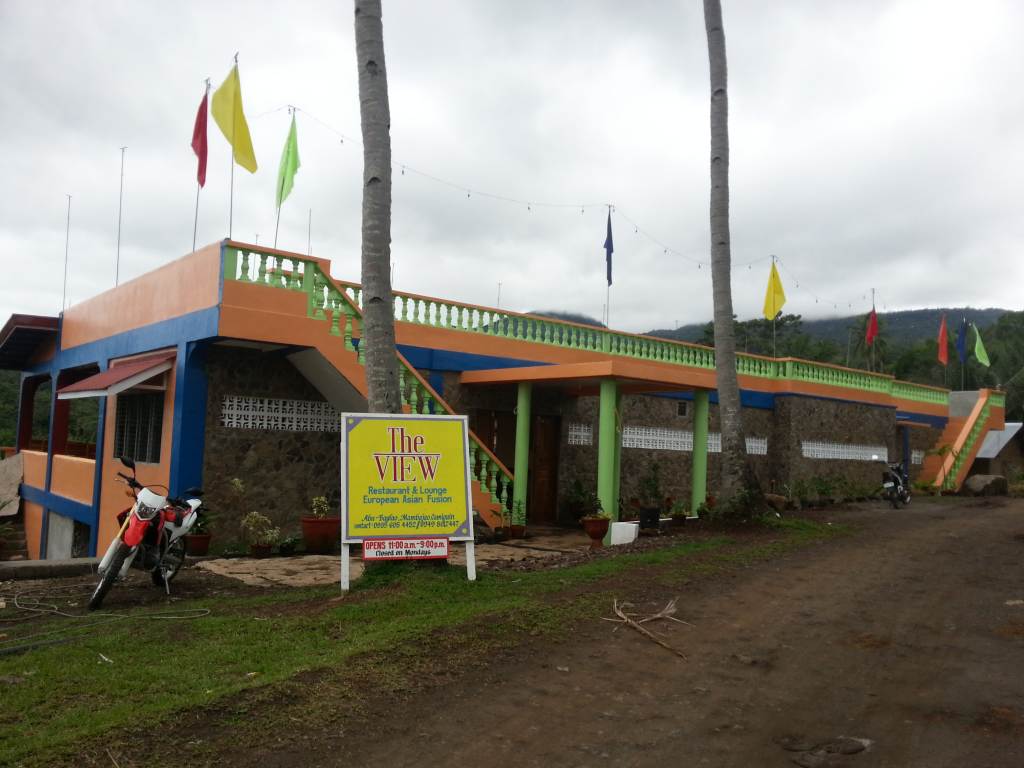 On a sunny day, the colors will jump in your eyes. Yesterday it had been really cloudy. We even couldn’t spot the house of our friends Rob  and Gwenn, they were in the clouds. The Phivolcs observatory had been well visible.

The 360° view in above text is a bit exaggerated when you sit in the restaurant. But from the sundeck of first floor you may enjoy it. Northward, the Anda Peninsula over in Bohol comes out of the sea. On a clear day, the mountains of southern Leyte are visible just aside. Over the eastward, over the river  the old and new buildings of the Phivolcs Volcano Observatory look down on “The View”. When there are no clouds, the hills of Itum are visible in the south. To see Camiguin’s active volcano, Mount Hibok-Hibok, you’ll have to go up on the upper deck. The mountain is on the west side and you cannot miss the 1350 meters of the volcanic edifice.

Sorry for the grey weather. We also didn’t have our cameras with us because we wanted to savor their cuisine. All we had with us were our cellphones.

The seats are a bit “All American” style but they are much mor comfortable than they look. The seats in the lounge and at the bar look much better. The wooden tables look nice and have good dimensions. Even a long-legged Caucasian will not hurt his knees. 😀

But we came her to eat

Butch chose a fresh vegetable spring roll to start (not shown in the picture) to continue with a chicken curry. Already the presentation was mouth-watering. In above perspective the nice shape of the “rice hill” isn’t visible. Unfortunately the curry wasn’t spicy at all. Well, Butch comes from Bicol, the home of the only spicy kitchen in the Philippines. I had a Hungarian Goulash. There had been a choice of either mashed potatoes or pasta. My goulash was nicely spicy (much more than Butch’s curry) and the meat had been a real tender beef. I can recommend the goulash.  A bit fresh cream in the sauce would have made it absolutely perfect.

The kitchen is promising and there is a potential for development. We’ll come back and taste other plates, that’s sure.

Mae joined us after the meal and told us about other activities in “The View”. There is a lounge that can be rented for functions. There will also be other surprises which will be announced step by step.

We wish Mae and her team plenty of success with their not so common restaurant “The View” Camiguin.