Have you ever read the name ‘Rubyann Kagaoan’? Under this name a person posts sharply observing “opinions” in the “Journal online“.

Here is the picture leading every “opinion”: 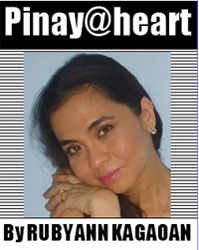 The writing is often so sharp that we fear that ‘Rubyann Kagaoan’ might disappear one day “without prior notice”.

Some of the “opinions” are funny like this one:

“Yes, Ma’am-Sir!”
I think in the Philippines we officially have 3 genders: Ma’am, Sir, and Ma’am-Sir.
Do you ever notice how salesladies in the malls and food courts often greet you with “Yes, Ma’am-Sir!” even though you are just alone, or you are with someone and you are both female or both male? And why do they always say “Yes”? Did we ask them a Yes-No question?
[Read more…]

Others are attacking as this one is:

“Modern-day Noli Me Tangere”
There was a cancer in the time of our national hero Jose Rizal that he elaborately depicted through his novel Noli Me Tangere, metastasized in every fiber of Philippine society back then, having its roots in the prolonged oppression of the Filipinos by our Spanish colonizers.
Today, we see cancer in the Philippines again, and our people and environment have shriveled badly from this cancer, which is on its terminal stage.
[Read more…]

And other “opinions” are good observations of the people:

“A violent sport that comes with a lot of prayers”
I watched the PACQUIAO-MARQUEZ fight, live and from beginning to end, of all places, in a church fellowship. I wanted to see how religious people react to a boxing match.
They were cheering at every blow Manny Pacquiao inflicted on his Mexican opponent Juan Manuel Marquez, yet it was clear to everyone that Marquez was giving the better fight. Everyone in the church consequently expected that the victory would go to Marquez.
[Read more…]

We have also bookmarked the “Journal online”.