Jeepneys are the symbol of the Philippines transportation and culture. At the origin had been thousands of American WW-II jeeps left behind. Filipinos are known to transform any junk into something useful. So they did with the jeeps.

How can one transport a whole Filipino family in a 4 seater jeep? Cut the jeep into 2 pieces, get some recycled steel bars and steel from oil drums. Shape them and weld them between the two pieces. You have the needed space.

Filipinos are joyful folks, so they decorate their jeepneys in the brightest colors and put chrome horses and at least 10 mirrors and horns on the engine hatch. There is a multitude of lamps - some of them actually do work.

A jeepney has an official passenger capacity of 20. But what about the people on the roof? A friend who owns a jeepney on Camiguin island told us, that he makes the 64 km around the island once a day.

When we wondered that 64x20 makes him only earn 1280 pesos (less fuel and so), he answered with a bright smile, that he does even not turn on the engine when he has less than 32 passengers.

So, jeepneys are usually crowded. As a tourist, you are often offered the seat(s) aside the driver. They give you more space for your legs. Otherwise, when you are behind, you will soon have a curved back and get some hits on your head, when the jeepney bumps into a hole.

Today's jeepneys aren't anymore built of sliced WW-II jeeps. They are built from scratch and get a refurbished ISUZU engine. More and more they are also replaced by multicabs and vans. Multicabs usually are open, but half-way covered Suzuki pick-ups. Vans are Toyota or Mitsubishi minibuses with or without air condition.

Multicabs are about as comfortable as a jeepney, but they are more economic and make less smoke and noise. Vans are theoretically more comfortable, but when there are 20 people in a 14 seater and a pig and some cocks ride with you, then you regret for not having taken a jeepney. Multicabs and vans are more expensive than the jeepneys (about 1.5 to 3 times the jeepney fare).

The Philippines is primarily known to many Willys fans as the home of MD Juan Enterprises, manufacturer of reproduction Jeep bodies and other replacement parts.

But there is another business, on the opposite side of metropolitan Manila, which has also grown out of the history of Jeeps in the Philippines, and is almost a national institution.

The Sarao Motors plant is located in the City of Las Piñas, a suburb of Manila known as a very progressive and modern city.

Sarao Motors is a family business which has been building traditional high-hood "jeepney" minibuses since 1953. Here is there price-list.

Jeepneys have no timetable, but they ply usually fixed routes. The endpoints of this route are painted on the side. If you you are new to the region, it is rather difficult to know, whether your destination is on the route or not. Ask the driver whether he stops at your destination or not. And if not, ask him for what route you have to look for. Good luck!

The picture illustrates this problem. Kalibo - Caticlan is rather easy to understand, but Blumentritt - Baclaran with the many stops is rather difficult to decrypt.

Jeepneys are good for medium distance transportation. Either the tricycles do not go as far or they are too expensive. It can also happen that, your destination might not be served by a bus line. The jeepney fares are fixed. When you get on the jeepney it costs PHP 2.00. Then every kilometer is billed PHP 1.00. To get off, make either a noise sounding "sssssss" or tap with a coin against the metal.

If you are a group, you may consider to hire a jeepney for a day. The driver then puts a sign on his windshield saying "Family use" and you won't be stopped by other travelers. A jeepney private rental costs PHP 1500 to 2500 a day plus fuel, plus food and drink for the driver.

In and just around cities there is no real danger because speed is limited by traffic congestion. Overland you always encounter broken jeepneys. When it's only a flat tire, the passengers are lucky and wait. But sometimes, almost during night trips, there are serious accidents. Jeepneys drive on dark country roads with maybe one lamp that works. If the driver gets tired or has to much tuba or rum inside, the trip becomes life threatening.

We recommend to take the bus for longer distances or night trips although they also crash too often.

Jeepney routes are difficult to understand. 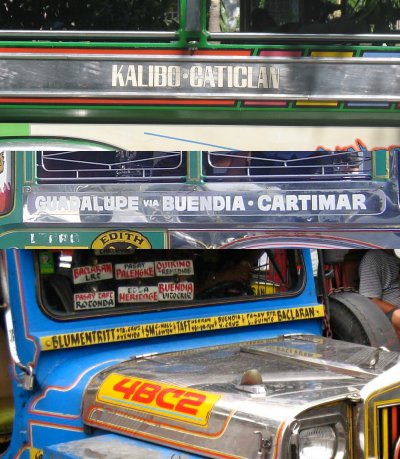 A weird wired cockpit of a jeepney, but it works. 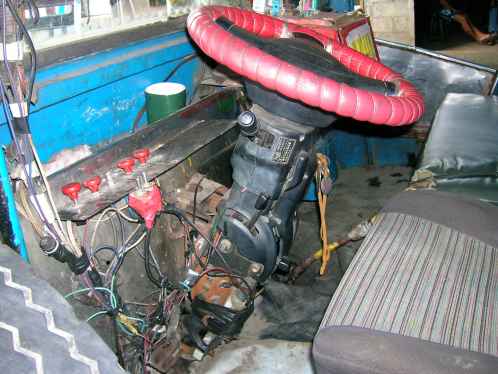 There is always a bit of space even in a full jeepney. 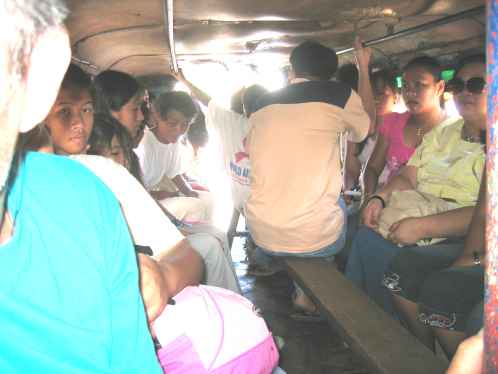 This one crashed the night before. 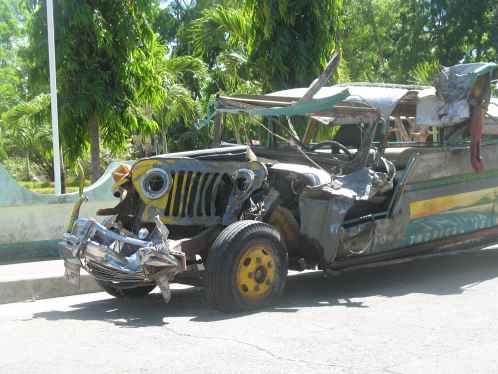 Multicabs operate mostly like jeepneys. They aren't as funny and there is less space. But the engines are cleaner and less noisy. Multicabs do point to point trips like jeepneys. But their drivers prefer passengers that ride the whole route. Fares are indicated for the whole journey. If you ride only a part of it, you will have to bargain with the driver.

If you are a group, you may consider to hire a multicab for a day. The driver then puts a sign on his windshield saying "Family use" or "Not for hire". A multicab private rental costs PHP 2000 to 3000 a day, plus fuel, plus food and drink for the driver.

Multicabs are factory built, while jeepneys are hand-made. Multicabs are mostly Suzuki XRM 125 or Suzuki LMM 376. They are usually safer than jeepneys. The only problem are their smaller wheels. When the driver misses a pothole, you will kiss the concrete.

A multicab plying a fixed route 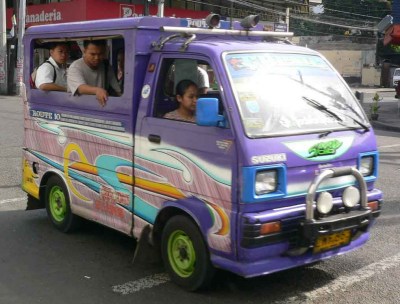 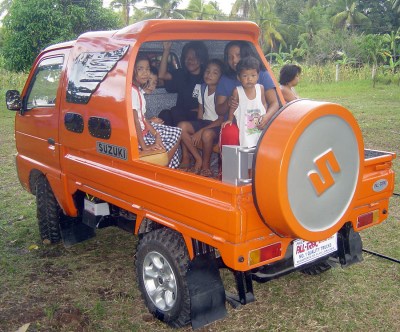 Vans ply point to point routes. They often wait for passengers in van or bus terminals, ports and airports. The routes are not painted on the van, but either there is a sign in the terminal or the driver puts a cardboard with the route on the windshield. The fares are usually PHP 1.00 per kilometer on medium and long distances.

I do not like vans. When they have a working aircon, then they are freezing cold. Drivers do not understand the positions between OFF and FULL When they have no aircon then it is either sticky hot or you eat dust. Vans usually carry about the double of the allowed passengers. Vans are theoretically comfortable, but when there are 20 people in a 14 seater and a pig and some cocks ride with you, then your journey seems to be very long.

Vans drive as fast or even faster than buses. They speed with 80 to 100 km/h through villages. Brakes? What are they for? Van drivers honk their horn.

This is why accidents happen daily and are often deadly. An exception are hotel owned vans. Reason? The hotels prefer living and paying guests. 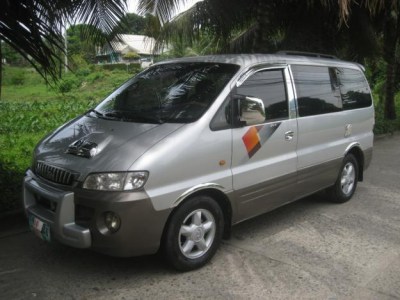 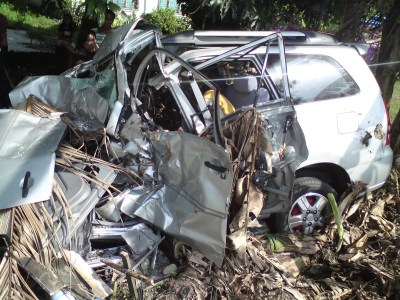