The currency in the Philippines is the Philippine peso (or piso). ISO standard code is PHP. The peso is divided into 100 centavos (or centimo).

Be careful! There are still people around who try to give you old bankontes.

Be careful with the 20 and 50 peso notes. They are nearly of the same color and in a batch of 50 peso notes you may find some of 20 pesos. Your money changer (see below) did win 30 pesos with every piece of 20 pesos smuggled in the batch.

The new 100 pesos notes can be blue or slighly violet.;

The Bangko Sentral ng Pilipinas (BSP), in cooperation with the National Quincentennial Committee (NQC), launched today the 5000-Piso Lapulapu Commemorative Banknote and Medal to kickoff the 99-day countdown to the 500th anniversary of the “Victory at Mactan.”

On its obverse, the banknote depicts a young Lapulapu, an image of the battle of Mactan, the QCP logo, and the Karaoka, the large outrigger warships used by native Filipinos.

Meanwhile, the reverse shows the Philippine eagle, or the Manaol, which symbolizes clear vision, freedom, and strength; and which embodies the ancient Visayan belief that all living creatures originated from an eagle.

Also featured are the tree of a coconut, which was food the people of Samar provided to Ferdinand Magellan and his crew; and Mount Apo, which is located in Mindanao, where the circumnavigators finally found directional clues to their intended destination of Maluku or the Spice Island. 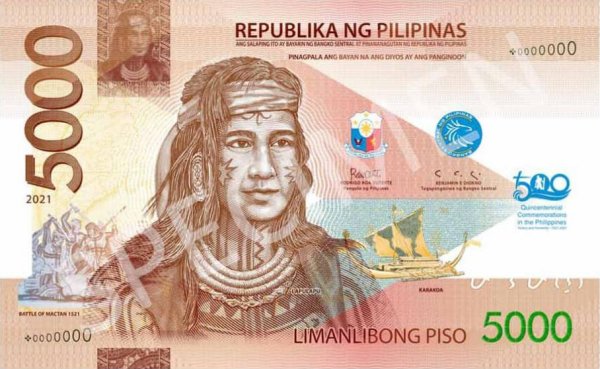 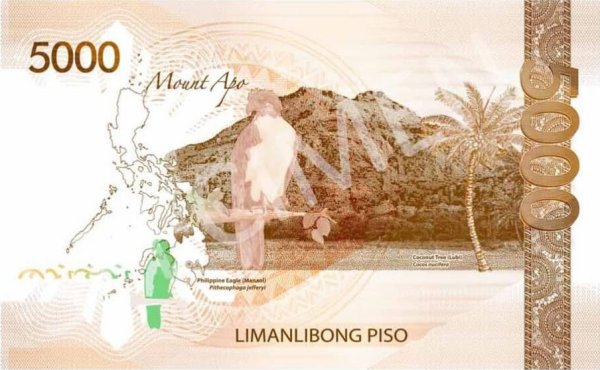 This new coin fortunately leaves the color style of the other coins. It is silvery in the center and brass in the periphery.

The size is almost the same as the 10 Pesos coin.

The Bangko Sentral ng Pilipinas (BSP) has not yet informed about when the 20 Pesos bills will be loose their validity. 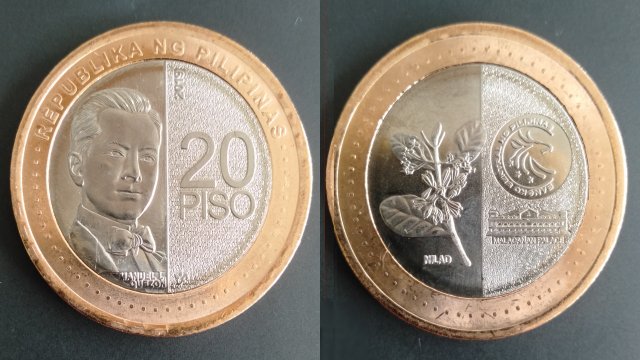 In 2018 also the Philippine coins have changed. Unfortunately they are now all of the same style and the same color. You really need to read the value of each coin in your hand.

This can be very difficult in the night in a dark jeepney. We even encountered jeepney drivers who gave back too much change!

Both sets of coins are still used. An expiry date for the old coins is not yet known. 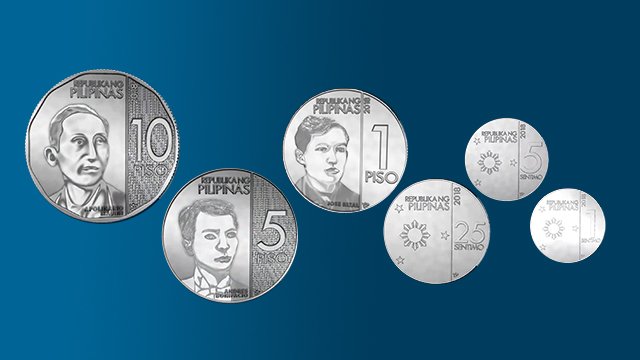 You are allowed import and export up to PHP 10'000. You may also import other currency up to the equivalent of USD 10'000. If you have to import larger amounts, then you have to declare the imported amount at the customs of your arrival port or airport. You nearly won't be able to get Philippines pesos abroad. Best choice are USD or EUR, but the euro is not yet accepted in remote places.

Before you travel to small islands, make sure to have enough cash with you. Even if you find an ATM on the island (e.g. Camiguin), it may not be able to handle your credit card.

Years ago it had been fine to change your US dollars at money changer boots in Malate. Today you get anywhere the same amount of pesos for your greenbacks. When you arrive at Manila's NAIA, you find 3 bank counters just before leaving the airport. Get your first pesos there and your taxi ride to downtown Manila will become much cheaper.

All over the country you find a large array of banks. But only few are allowed to change your foreign money into pesos.

The big problem comes when you want to sell pesos and buy other currency than US dollars. Most money changer buy almost any foreign currency, but they do not sell it. I could get neither Singapore dollars nor Thai baht at Cebu's Mactan International Airport.

For Filipino travelers the only possibility is to buy US dollars here in the Philippines. Once arrived at the destination abroad buy the local currency with the US dollars.

It is wise to have 2 or 3 USD 100 bills stowed anywhere in a secure place on your body (money belt). They make sure that you can get a plane ticket from any place in the Philippines to Manila.

Make sure that you always have lots of small banknotes and coins in your pocket. "Sorry, no change" is the standard trick to get some extra pesos from you. In many 24/24 hours shop where you can buy food, drinks, cigarettes and more. All prices are indicated as PHP x.50. Curiously they do never have 50 centavo coins available...

Before you travel to small islands, make sure to have enough cash with you. Even if you find an ATM on the island (e.g. Camiguin), it may not be able to handle your credit card.

Plastic money becomes more and more common in the Philippines. In large cities and in tourist crowded places like Boracay you may pay everything with your credit card, but in remote locations it may be worthless. Be also aware that the exchange rates applied by the large credit card companies are up to 10% below the local exchange rate.

There are incidents of credit card fraud in the Philippines, but they are also known in many other countries. So, do always keep an eye on your credit card. Do not allow hotel receptionists, bank clerks or any other person do go to a back-office with your credit card. Your card number and the security code on its back might be copied and used for Internet purchase or several blank slips may be produced and your signature be forged.

Check the ATM vor BANCNET or MEGALINK stickers. If there is such a sticker, you probably can use your credit or debit card from home. 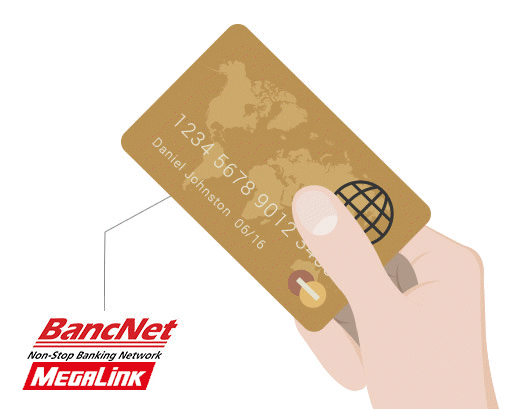