The Eiffel Kubo in Malaybalay – Bukidnon

The Eiffel Kubo in Malaybalay opens our new series about culinary surprises in the southern Philippines.

Our discovery started with a series of mishaps. It begun at home in Camiguin. We had no more coffee beans and none of the local shops on Camiguin island had the famous “Monks Blend” on stock. So we decided to drive up to Bukidnon to buy coffee directly at the coffee farm near Malaybalay.

We arrived around 4 p.m. in Malaybalay and went to the Pine Hills hotel, where we had booked 2 nights in advance. After a short refreshing we decided to have an early dinner. First deception: there had been no cold beer. Even worse, there had been no beer at all. I don’t write about the wine they tried to sell. You would start to cry. We then ate some food there in the dark. Malaybaly had a brown-out.

It was still much too early to go to bed and frankly, our bellies were extremely frustrated. We then walked down the dark Sayre Highway. On the first road left, about 100 meters from the main road, we saw a light . . .

. . . the light belonged to the Eiffel Kubo.

Our first reaction was: What a crazy name. A composition of the Eiffel tower in Paris and the local word Kubo. A Kubo is a  Nipa hut, or Payag, Kamalig or Bahay Kubo, is a type of stilt house indigenous to the cultures of the Philippines. When we entered the restaurant, we understood the composition of the words.

We encountered an exquisit French restaurant setting. The tables really looked inviting and memories of my past life came up. A very warm feeling! We were welcomed by the waiter and decided to have a bottle of our beloved “Chardonnay” out in the garden, in the kubo. The waiter then showed us the menu card. We instantly regretted our awfully filled bellies. Fortunately there was a little space left in our stomachs and we could order a sweet dessert.

We ordered a Crêpe Flambée. Flambeed banana and mango slices, served with spiced crêpe with hazelnut paste and a vanilla ice cream. What then happened stunned us  completely. The chef herself built up a gas stove aside our table and prepared the crêpe “à table”. While she prepared our surprise, we had an interesting chat. The crêpe met our Chardonnay in a firework of tastes. We felt hovering on cloud nine. 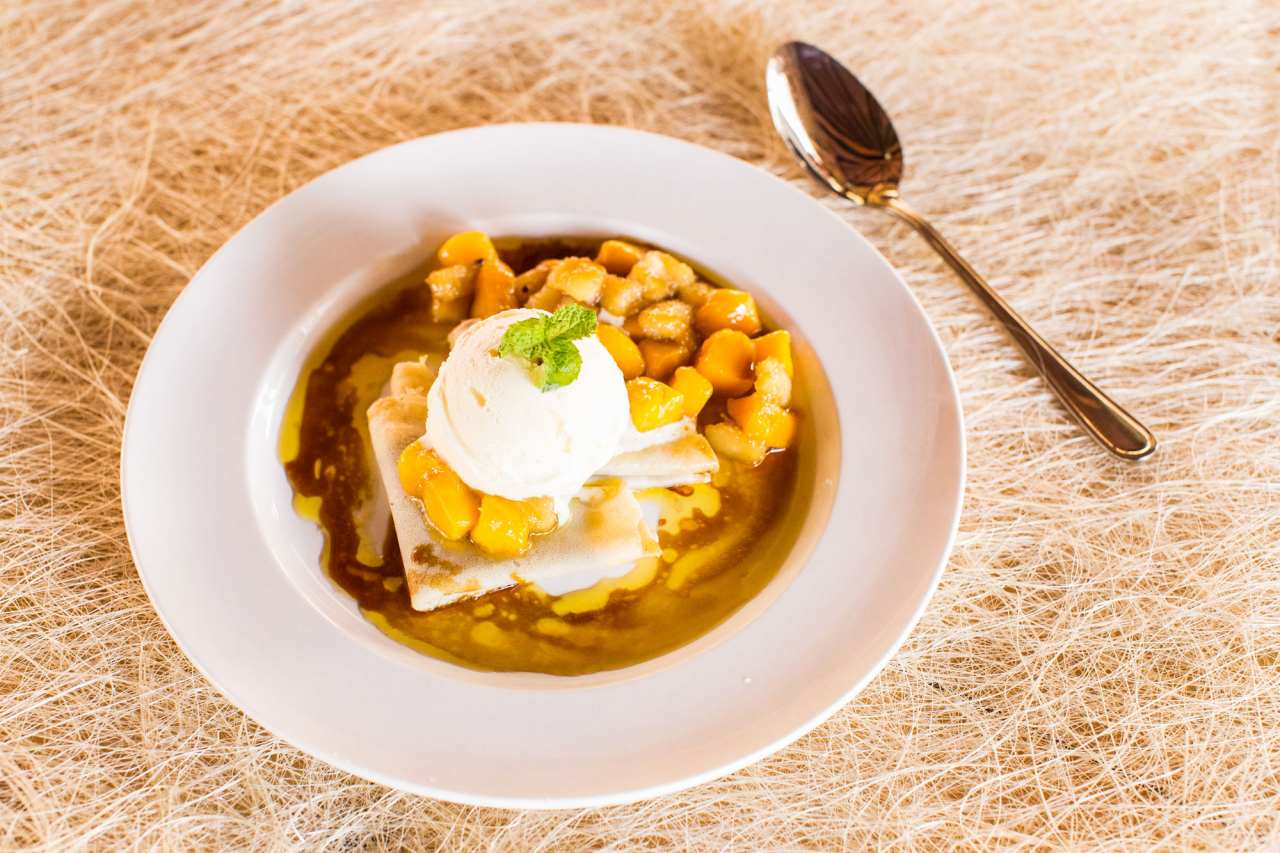 There was no question, we asked to reserve a table for the next evening. The three of us were so excited when we walked back to our hotel. We never would have dreamed of such exquisite gastronomy out here in the middle of still rural Mindanao.

In our dreams that night, we already started to compose our dinners of the next day’s evening. But this is an other story I’ll tell you tomorrow. All I say for now “Get prepared for a culinary dream“.