Driving in the Philippines – a Beginner’s Guide

Important: The following article is copied from INQ-POP, otherwise known as INQUIRER.net’s quirky little cousin. The original article with pictures is here. I do not want to infringe copyright, but many of our readers do not read the INQUIRER. A simple link wouldn’t have allowed me to add my own comments. My thanks go to AJT SANTOS.

Dear Fellow Driver
Thank you for taking the time to study the beginner’s guide to driving in the Philippines. This handbook will help you survive driving in the Philippines and will make sure you cause as much traffic and inconvenience as you can on your journey to becoming a certified Pinoy driver.
Everything in this handbook will be based on two principles. Learn them well and commit them to heart.
Ready? Step on the gas, pull out without looking, and let’s begin. 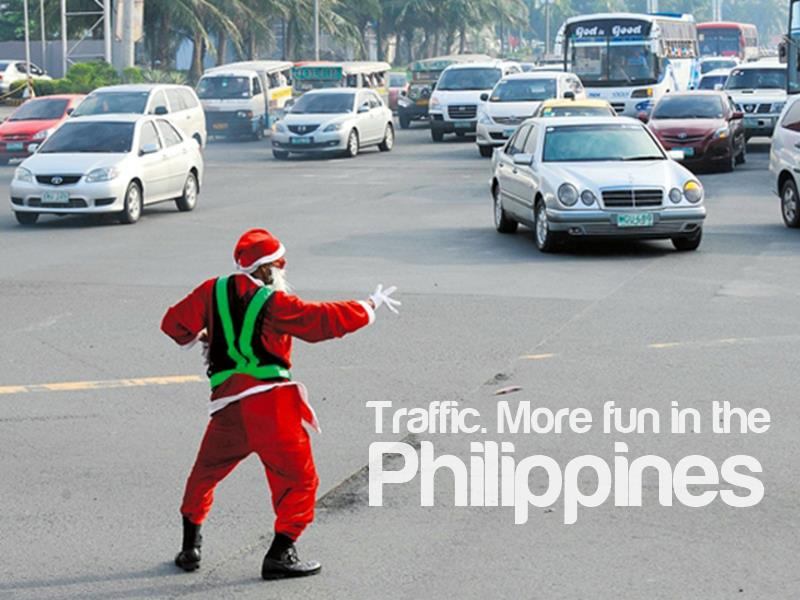 Courtesy and common sense dictates respecting the right-of-way of others, vehicles and pedestrians alike. However, you are driving in the Philippines. Remember our first rule? Nobody is more important than you. Here, whoever yields loses. So go ahead and block everybody!

If you see a pedestrian crossing the road, honk your horn and speed up. You’re the big shot in a car. Block them peasants!
If another vehicle wants to merge in your lane and there’s enough space in front of you, flash your headlights, speed up, and block them. Your lane is your territory. Guard it with your life. 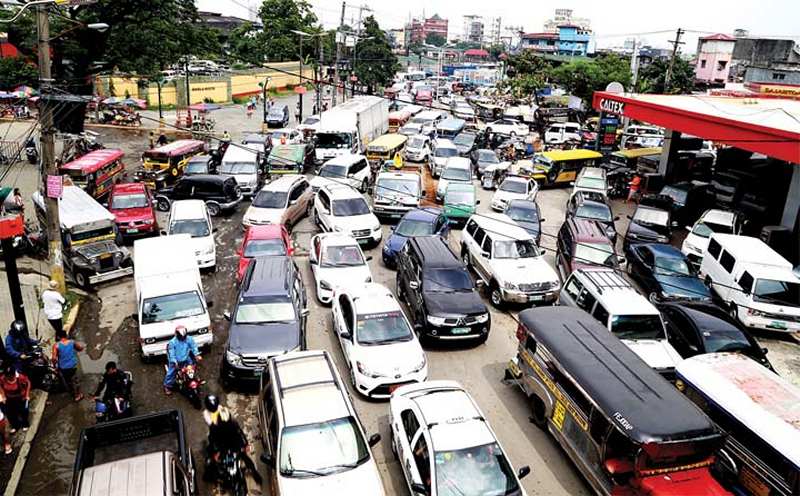 Is the car in front of you driving at the recommended speed limit? Or maybe you have the itch to be just one car ahead to prove your superiority despite achieving nothing? The solution is to drive in the opposite lane, known colloquially as counterflowing. Simply pull out, cross the center line, and drive in the same lane as oncoming traffic. Once you have passed the car in front of you, swerve back without signaling so they can’t block you off. You can’t call yourself a true blue Philippine driver if you haven’t mastered this trick!

[waebi’s five cents]: On our “Rent a Car” page we have listed the priority ranking:
There is no priority like “right of way”. The rules are:
Sometimes numbers #4 and #6 are reversed, cheers Rob!

If you see a line of cars about to make a U-turn or turn at an intersection, feel free to drive outside of their lane and cut them off in front. Do not wait in line; that’s only for civilized drivers. This way, you get ahead of everybody else who have been patiently waiting for their turn in traffic.
Green means go. Yellow means go faster before it goes red. Red means stop — but only if there are other cars crossing the intersection. Otherwise, feel free to ignore it and just go straight ahead.
If you find yourself at a red light and you’re the car in front, an effective way of making your 30-second to 1-minute wait bearable is to slowly inch your car forward bit by bit. By the time the light turns green, you’ll already be halfway through the intersection. 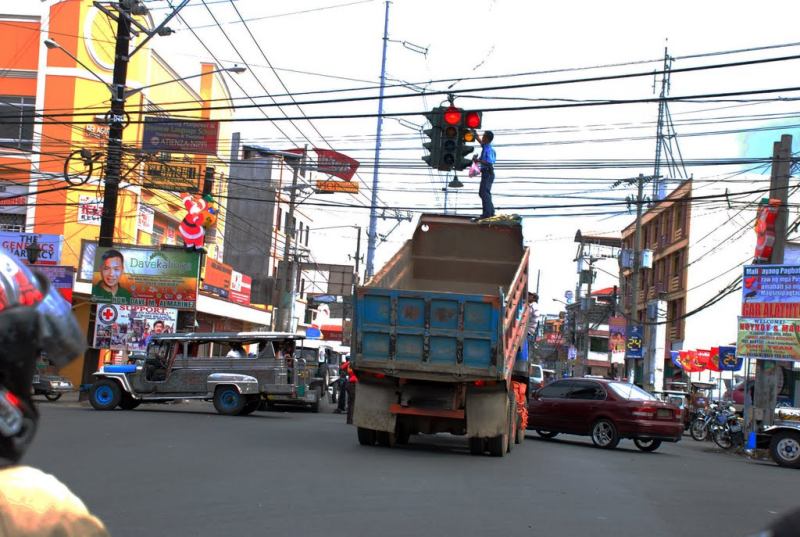 [waebi’s five cents]: Cagayan de Oro had invested millions of pesos into traffic lights. After some months one after the other failed. The failing bulbs and LEDs were replaced by traffic enforcers – they are cheaper!

Speaking of doing whatever you want, did you know that the Philippines is the only country where you can stop anywhere you want, anytime you want? It doesn’t matter if it’s the middle of a busy street, a sidewalk, or a pedestrian crosswalk, if you want to show everyone how important you are, simply turn on your hazard lights and stop. Not only will this cause inconvenience and unnecessary traffic stoppage, the cars behind you will race to go around your vehicle causing even more hassle for others! Good job! 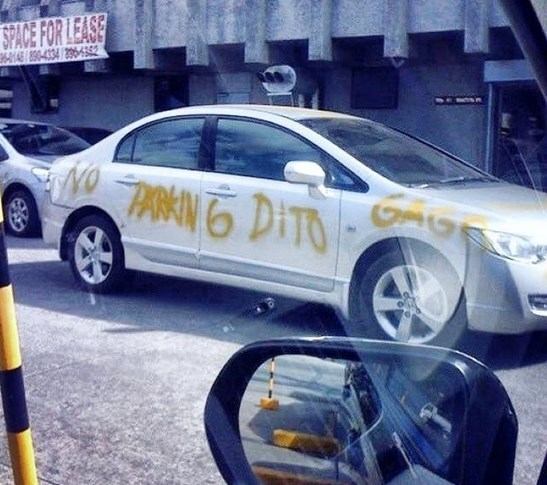 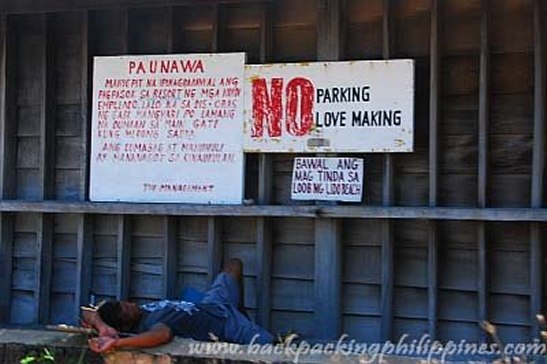 [waebi’s five cents]: In the town of Mambajao, capital of the island and province of Camiguin, over 90 percent of the parking space has been declared “No Parking”. About a dozen of “Sheriff’s aides” are patrolling and distributing fines.

Apart from counterflowing, an effective way to avoid traffic caused by irresponsible drivers like you is to create your own lane. You see those broken lines in the road? No, they’re not there to demarcate lanes. They’re there to guide you in creating your own lane in case of a traffic jam. Align the center of your car with the broken lines, drive, and watch cars on either side of you move out of the way in order to accommodate your royal douchiness. This maneuver is also known as “The Parting Of The Red Sea.”
In most other countries, changing lanes is always preceded by the use of your turn signal. This tells other drivers that you intend to go to the left or right. In the Philippines, you do not want to use your signal lights when turning or changing lanes. Doing so will prompt the car on the side where you intend to turn to speed up and block you even though they were driving at normal speed before you indicated. 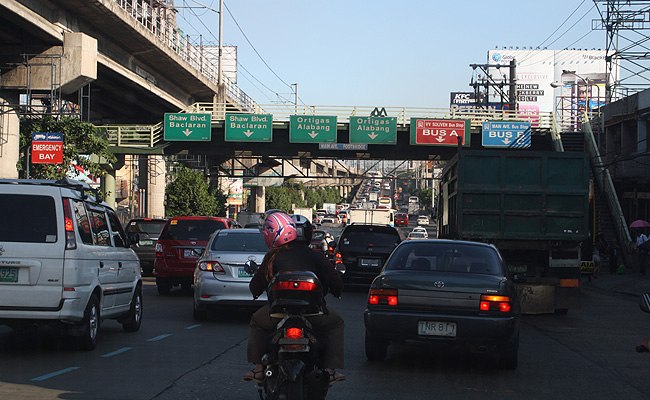 Disclaimer: This is a highly-advanced trick of the trade and should not be attempted by decent people or those who actually passed their driving test without cheating. It takes a certain type of nimrod to pull this off. So unless you’re a self-entitled savage or in possession of an extremely thick layer of skin, leave this part to the pros.
In the Philippines, image is everything. Make sure to drive the biggest SUV or pickup truck you can afford. And make sure it’s black. And have the windows tinted darker than your sunglasses. Then, drive down a one-way street going the wrong way. Give yourself a pat on the back every time a car yields and gives way to you. 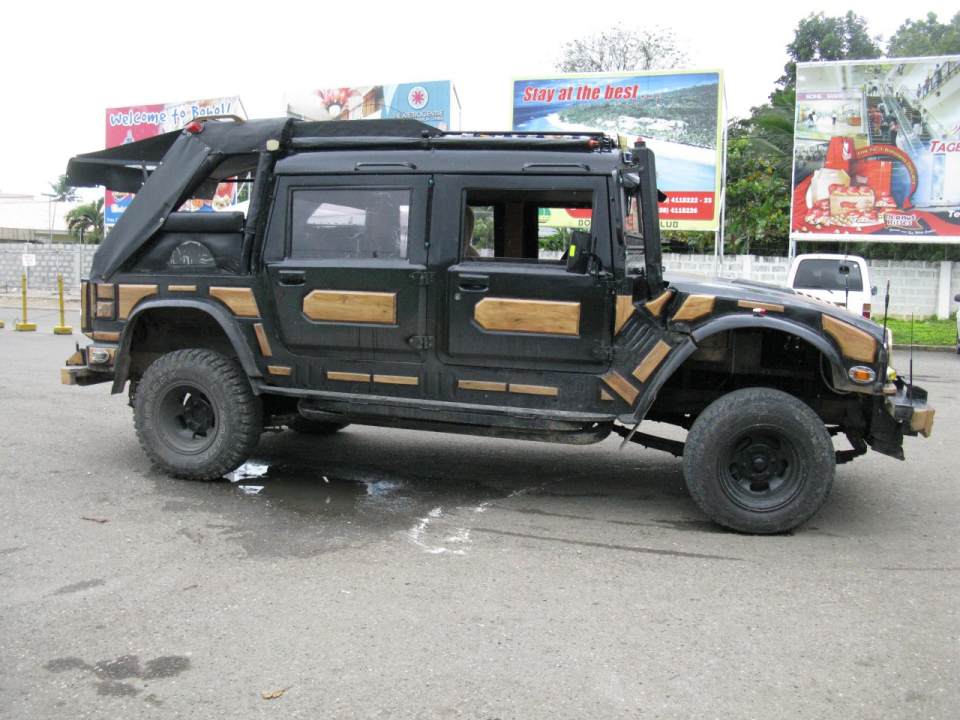 [waebi’s five cents]: I know this SUV effect. On normal days I drive with a Toyota Innova. Just another vehicle in the lane. But on special occasions we take our Humvee out of the garage. What a difference! I enjoy the 99% of absolute right of way. 99% only? Yes, the governor of Camiguin has also a Humvee 😎

Driving in the Philippines

There you have it. Everything you need to manage the mean streets of the Philippines. If you follow the rules outlined in this handbook, you will blend in well with the rest of the cavemen on the road and contribute to the soul-sucking traffic that plagues this great nation.
If, on the other hand, you’re one of those rare species of drivers who insist on driving defensively, being courteous, and following road rules like a good citizen should, you’re on your own. Traffic laws in the Philippines were written by Cinderella’s fairy godmother. They get suspended after midnight, at which point it’s pure anarchy where only the most vicious neanderthals survive. The choice is yours and we wish you luck!
[GARD]
Share if you like

Tags: Driving in the PhilippinesHumveeLTOtraffic enforcer