Motorbikes Philippines owners can still use Light Emitting Diode (LED) but with certain restrictions. LTO announced that the previous rules and regulations governing the use of LED stay but clarified that use of LED should adhere to specific parameters.

Under the memorandum, headlights must be white or yellowish in colour, capable of being directed downward and incapable of going on blinker mode. For brake lights, only one is allowed, and it should be placed at the rear of the vehicle, wired (to be turned on only when the brakes are applied). Taillights, however, should only be red, and incapable of going on blinker mode; while signal lights should only be orange, yellow, or amber.

One of the thornier points leading up to the memo’s release, however, are the additional fixtures. The LTO specified the requirements for fog lamps which included its colour – white or selective-yellow and should only be used when there is “thick fog, falling snow, heavy rain, or similar conditions.”

The LTO also allowed two auxiliary headlamps, but only upon meeting the following requirements:

• White or selective-yellow
• Mounted in a way that it would not be affected by shocks
• Not used on well-lit streets or when meeting another vehicle on a public highway
• Must have a maximum of six bulbs per lamp and not combined as one unit or placed together to form a bar.

[Editor’s comment:] I wonder from which source LTO has copied this new rules and regulations. I think it’s from a country much more north. This could explain the falling snow 😆

This new rules and regulations are absolutely needed and not only for motorbikes but also for cars and trucks. Above short video is just a tame illustration what you encounter here in the night. Headlights in all colours can be seen. Worst are the red ones!

The problem here in the Philippines is the implementation and enforcement of rules, regulations and laws. The pictures below have gone around the world. This is how LTO and police enforce helmet wearing regulation. Yes, one should comply but … 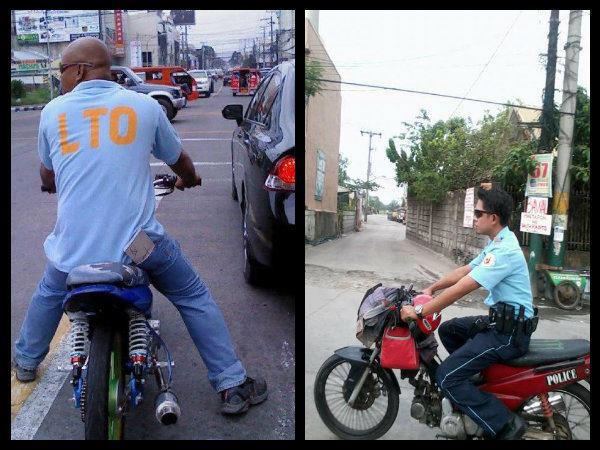