Bicol Express – someones get hungry and others get nostalgic. PNR, the Philippine National Railways on September 19, 2005 has reopened a section of the famous Bicol Express between Naga CIty and Legazpi City in Bicol region. I rode this train – in the locomotive.

To make it short, here is the movie I produced on November 5, 2015. I had the rare chance to travel in the locomotive from Naga to Legazpi.

The making of Bicol Express – The Movie

The Bicol Express is the most prestigious section of the once important railway system in the Philippines. The Bicol Express linked Manila with Legazpi City. The Philippine railway system had even been much larger. It linked San Fernando in La Union with Manila and then went south to Batangas and Legazpi. 2012 the section from Manila to Naga City had been open for about 6 months until a landslide interrupted the rails again.

Filipinos are known to fix everything. Around Naga City they immediately put their “Skates” on the rails, when the PNR trains did not run anymore. “Skates” are a very adventurous form of commuter trains. And even with PNR being again on the rails, the “Skates” still deliver cheap commuter services on demand. 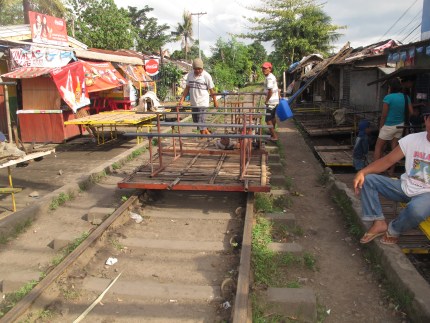 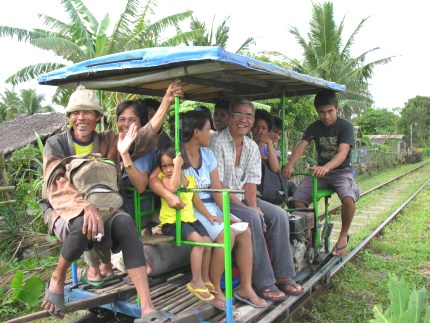 Some commuter trains still run between Pamplona, Naga City and Ligao. The righthand picture below is a jewel, because it shows the official commuter train side by side with a “Skate”. 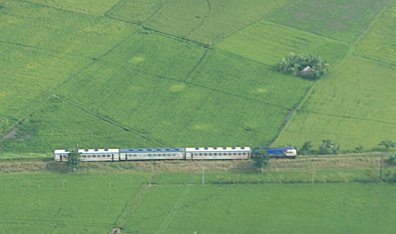 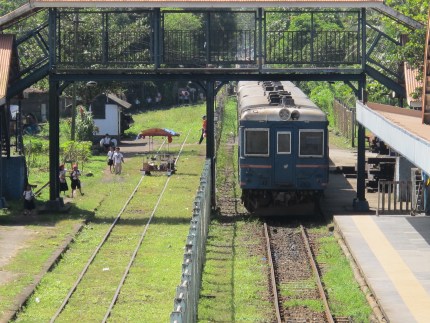 On September 19, 2015 PNR proudly announced the re-opening of the section from Naga City to Legazpi City. The most difficult construction had been the railway bridge near Ligao, some kilometers before Legazpi City.

Begin of November 2015 we had again been in Naga City to celebrate many birthdays. I had the fixed idea to travel with the Bicol Express – and why not in the locomotive. A friend and classmate of my Butch, Gina Fortuno, made the contacts with the responsible persons. First step was the office of another friend, Greg Maño. 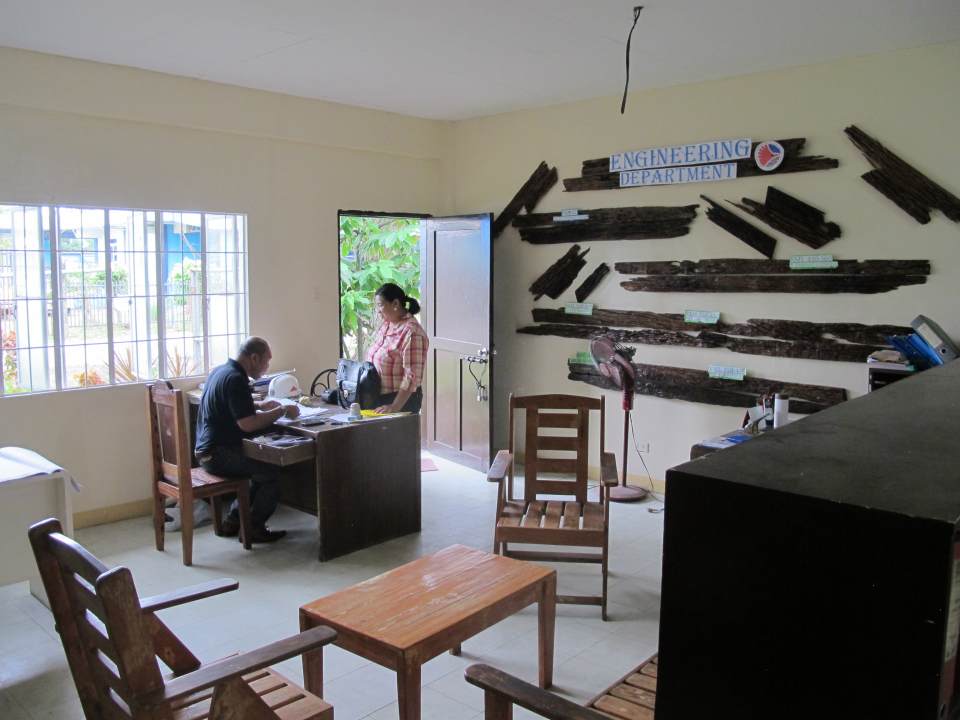 Greg established a written recommendation for me  to travel in the locomotive. His superiors, Engineer Jimenez and Engineer Florece, approved and authorized.

My thanks go to all the four of them and of course to my Butch. Without my Butch this dream wouldn’t have become true.

As usual in the Philippines, people travel at absolutely non-Christian hours. The train leaves Naga City at 05:00 a.m. ! I used my Canon PowerShot G12 in full HD movie mode to capture impressions of this adventure. First I had the camera mounted on a tripod, but the locomotive moved wildly in all 3 dimensions, so I stabilized the camera with my own weight 🙄 . But be warned: people with motion sickness problems should not watch this movie.

It had been incredible. The drivers of the locomotive had installed a 3rd seat for me – a plastic garden chair. The first 10 minutes of the trip, I was shaken. Shaken by the movements of the machine and also shaken by the run in the dark night without seeing what was in front of us on the rails. The sight of the driver is extremely limited.

The headlights were in good condition but did not reach farther than 40 meters. The protective steel screen on all windows reduced visibility furthermore. This massive steel screen is needed because people in the outskirts of Naga City seem not to like the train and throw stones. And yes, a bit cleaning of the windshield would also have improved visibility.

Dawn had been wonderful. The sky slowly appeared out of the night, changed its color from gray to red – orange – yellow and then blue. Meanwhile I had found the perfect position of my feet to keep the plastic chair in a rather stable position and we arrived in the first station. Had it been Pili or Baao? Don’t ask me – I had already been in a state of trance. The sounds, the movements and the upcoming day were marvelous.

We then stampeded through rice-fields on our brave diesel-electrical horse. The locomotive is probably much older than I am. But the horse did run like a young foal. Jumping up and down, left and right. Holding the camera had been a real challenge.

And the suddenly the train slowed down. Slow – slower – full stop. I heard the wheels still spinning and the engine generating electricity. But all movement had stalled. A glance over to Winston, the driver, showed clearly that he was annoyed. The reason of our horse’s stalling was the loss of friction. The rails slightly climbed, but nothing compared with the Andean Express in Peru or the Raethische Bahn in Switzerland. The rails were wet from the heavy tropical rains and the wheels slipped on a soapy juice of water, plants and spilled oil.

The train crew and local people put stones on the rails. These stones were crushed to sand by the weight of the locomotive and provided more friction resistance. The train slowly gained speed. Slowly – slowly – slowly.

At each stop, 7 until Legazpi, commuters descended from the train and new ones stepped in. While waiting, Winston always had a chat with the female train-station staff. He gave me recommendations about … sorry I can’t write this, it might create some conjugal problems. 😀

On the high speed sections between rice fields we made a speed of up to 60 kilometers per hour. As there were no more flying stones to fear, we had opened the front door – the door in front of me. The 60 km/h felt like the 280+ km/h in a bullet train (TGV, Shinkansen and others). I was overwhelmed by the sights, by the feelings, by the emotions, by the wind.

And then, in the vicinity of Ligao, the most beautiful Volcano on earth, Mount Mayon, appeared. I could only catch some glimpses because our steel-horse ran wildly, but the sight on the morning fresh Mayon had been wonderful. You must know that Mount Mayon shows its beauty only early in the morning. Later it hides its perfect conic shape in cumulus clouds.

The final and ultimate challenge laid still ahead – the bridges. These bridges near Ligao had been the last financial challenge before the Bicol Express finally could reach Legazpi again. Speed for the train had been limited down to 15 km/h. So I could stand out on the front platform and take pictures. Breath taking. Leaving the tropical bush and hover over the river had been outstanding.

Soon we entered the outskirts of Legazpi City and reached Legazpi Central Station 😆 at 07:51 a.m.

And for the records: No human fatalities or injuries were to complain during this trip. But two dogs, two roosters and about 4 or 5 chickens did not step off the rails as fast as they should have done. Sorry.

Back home in Camiguin I cut the raw 3 hours movie material down to some 12 minutes. Every time I watched the cut scenes, a melody played in my head: the March from River Kwai (Colonel Bogey). The nature between Naga and Legazpi is very similar to the Thai site, where this famous bridge in the movie had been built by prisoners of war.
If you haven’t yet played my movie or just would like to listen, click below.

There will be a second movie: Turning the train in Legazpi. I hope to finish the cutting work in a few days.

Above is the compressed version for people with bad Internet connection – meaning all those who live in the Philippines.  This movie is also available in full HD. Please contact us, if you would like to have it. You may use the comment form at the end of the page. Download price is USD 5.00 only. DVD is USD 20.00 plus shipping. 2 GB USB stick is USD 50.00 plus shipping.

If you like this movie, please recommend it by clicking on the sharing buttons below. Thank you.