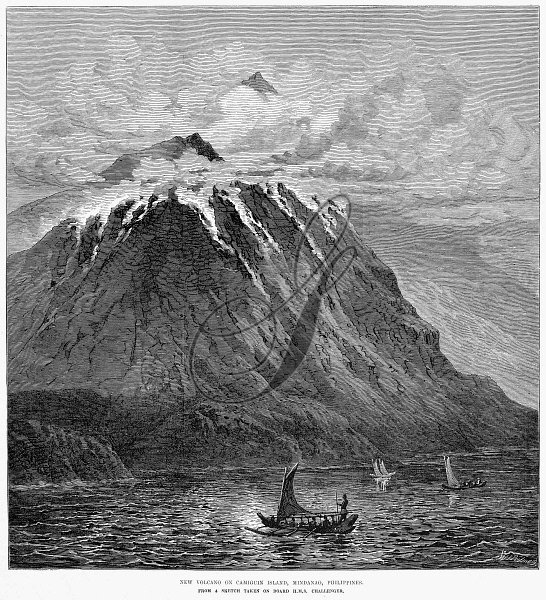 Camiguin: Yesterday evening the MindaNews published an interesting article about the history of Camiguin

Do you know that there is an island called Camiguin that it is located on the northernmost part of Luzon? That this island is near the province of Cagayan Valley? Here in Mindanao, we have the fabulous Camiguin island that is only several hours away by land and sea from another Cagayan – Cagayan de Oro City!

No one has come up with an adequate explanation why the two place names are both found in Luzon and Mindanao and are quite near geographically from each other. However, Camiguin and Cagayan are very old pre-hispanic names. Both are early or proto- Austronesian words and Austronesian is the family stock from which all Philippine languages are descended.

The Camiguin island that we are all familiar with is prominently located before the central coast of northern Mindanao. Early Portuguese and Spanish chroniclers wrote that the island was called Camigui, Camiguing and Camiguenen by the ancient inhabitants of the archipelago.

Fr. Francisco Ignacio Alcina, a Spanish Jesuit wrote a book in 1668 entitled, “Historia de las islas e indios de Bisayas” where he mentioned a famous kandu or epic sung by his old parishioners about a prehispanic Bisayan warrior who made several raids around the archipelago including “Camiguing”and even as far as the coastal areas of China. He did this so he can win the hand of a beautiful binokot or princess from Bohol.

Many believed that because of the island’s location, the ships of Magellan probably made a stopover in the island on their way to Cebu. While others wrote that the Spanish explorer did land in Catarman, a coastal area of the island and filled his casks with water from a spring there. However, there is no record by Magellan’s chronicler, Antonio Pigafetta or from the accounts of the survivors of the ill-fated expedition who were interviewed by Fernando Oliviera, that they were in Camiguin.

The earliest record about the island was written by a Portuguese, Joao de Barros in his book,Quarta Decada da Asia. He wrote that in 1538, a Portuguese captain, Franciso de Castro, sailed the length of Mindanao and converted the rulers of Sarangani, Surigao and Camigui to Christianity along with their respective wives and children. That the king of Camigui was baptized and given the name of Dom Francisco.

Then there is a  book on the voyages of Fray Urdaneta, the friar who was with the expedition of the Spanish conquistador, Miguel Lopez de Legazpi to this country (J.R. de Miguel 2009),that mentioned that on Sunday, March 11,1565, the fleet of Legazpi cast anchor on the west coast of Camiguin at 6:00 P.M. There, they found all the houses empty as the people fled and hid in the forest. Legazpi then ordered Martin de Goiti and Andres de Ibarra to explore the island and look for cinnamon, a spice that was greatly valued by the Europeans. Having found none, they left for Butuan. Another 1565 document that was subsequently published in La Solidaridad in 1892, mentioned that upon Legazpi’s arrival in Camiguin, they met the chief named Malitik and that he allowed his son, Kamutuhan, to guide the Spaniards to Limasawa.

The reason why the people fled in fear upon seeing the ships of Legazpi approaching the island was because two years earlier, the Moluccans and Portuguese raided Bohol where they killed a ruler and took many of his subjects as slaves. Then they proceeded to Camiguin and Limasawa islands where they sacked and burned the coastal villages and also killed many inhabitants.

In 1596, the Jesuits were given permission by Governor General Francisco Tello to do mission work along the Butuan river and in Camiguin. Three years later, they founded Guinsiliban, the oldest  town and the first parish of the island. But they left due to the numerous hardships they experienced in the island. They were followed by the Agustinians of the Observant Order but did not stay long due to what they described as the “extreme ferocity” of the people.

Finally, in 1622, the Agustinian Recollects came to the island with the Venerable Fray Miguel de Santa Maria as the first Prior. The Recoletos were to stay in the island for more than 200 years and founded the towns of Catarman, Sagay, Mambajao and Mahinog. Their first mission station was in Catarman. It was there on that same year, that two of their missionaries from Caraga stayed for sometime while awaiting word from Salangsang, the chief of the Cagaiang (Cagayan) that they be allowed to enter his territory.

And the rest is history. From Camigui (as written in the 1681 Recoleto Journal), the two missionaries, Fray Juan de San Nicolas and Fray Francisco de la Madre de Dios became the first Spaniards to enter Cagaiang. They were successful in converting the people to the Christian faith starting with Salangsang and his wife and later,founded the present site of Cagayan de Oro ( Blair and Robertson 1903-1909).

In October 2010, an archaeological survey was conducted around the island by a team headed by Prof. Leee M. Neri from the Archaeological Studies Program of the University of the Philippines – Diliman. Based on exploratory findings, there is a very great potential in discovering more material evidences that can help establish the prehistoric and pre-hispanic periods of Camiguin Province. It is our hope that further archaeological studies will be done in the near future for this purpose so that the island’s history will be further enriched.