I had interrupted the report of our fifth day shortly before Mati. Mati City is the capital of the province of Davao Oriental and indeed the only city in this province. Mati has about 130,000 inhabitants and has remained a small town. The city is divided into four regions: Población, Capitol Hill, the new Sibala Village, and the subdivision  “Mati New Estate”. For tourists Sibala Village and the Baywalk are the most interesting ones. For divers and beach lovers the offshore peninsula is recommended.

Untill now I have not been able to find out whether Dahican means the whole peninsula or only the Pacific-facing side Dahican Beach, and the west side is Masao Beach. One thing is clear, next time we will visit the 3 islands Pujada, Waniban and Oak Iceland. 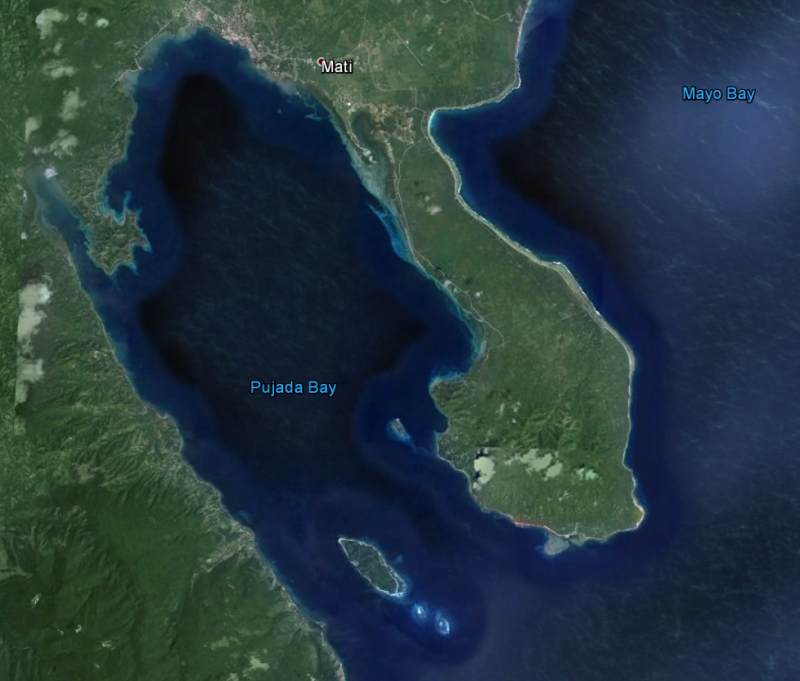 At our first pass through Mati, we hadn’t discovered a hotel. Therefore, we are first drove out to the peninsula. Some resorts out there can be found on the Internet. The concrete road reaches far out on the flat peninsula full of coconut plantations. On the Pacific coast all resorts were closed and suddenly the concrete came to an end. 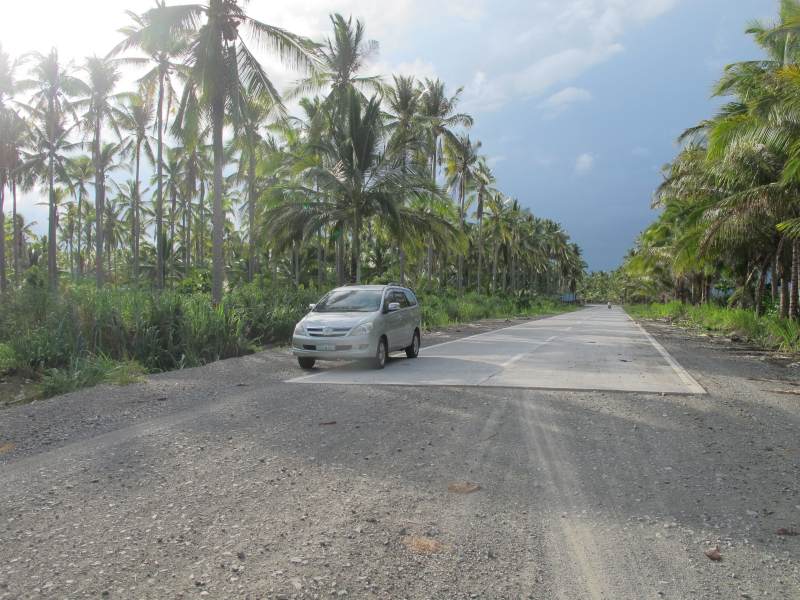 In the mountains behind Mati the evening thunderstorms started to menace. 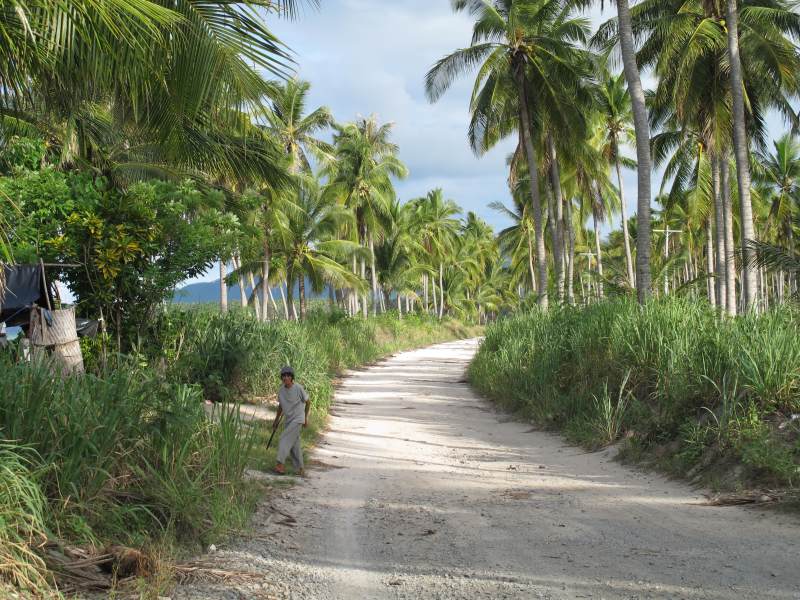 The peninsula is actually one huge coconut plantation.

We drove across the peninsula to the west coast. The first resort we found was the Blue Bless Beach Resort. It made a clean, almost licked impression. While my navigator discussed rates with the manager, I strolled to the cliffs, because on this side of the peninsula there is no sandy beach. Here their Facbook page, the website is not working. 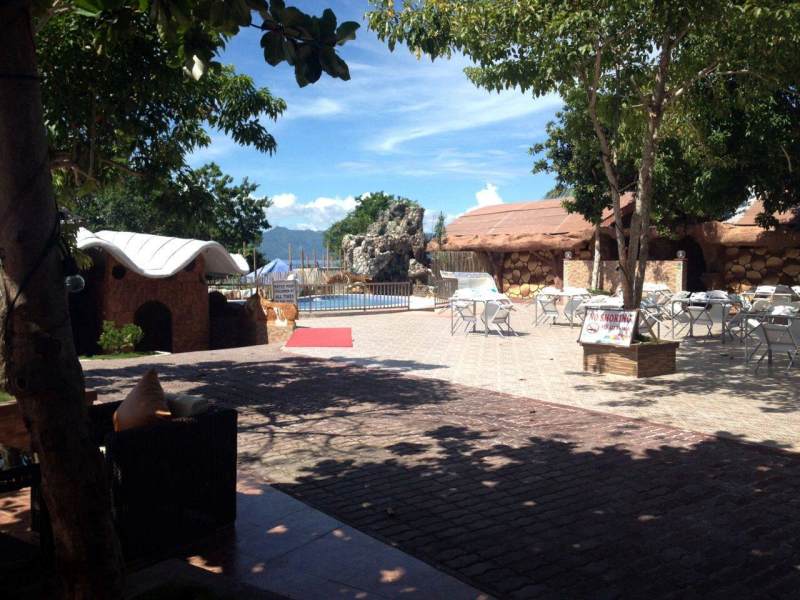 We have didn’t stay there because the lovely cottages on stilts in the sea weren’t guest rooms. The guest rooms were hidden from the sea behind the other buildings. Navigator reported a rather arrogant manager and astronomical prices of more than 3000 pesos per night.

Further out on the peninsula, there are several resorts, where the guest rooms really stand out then on stilts in the sea. 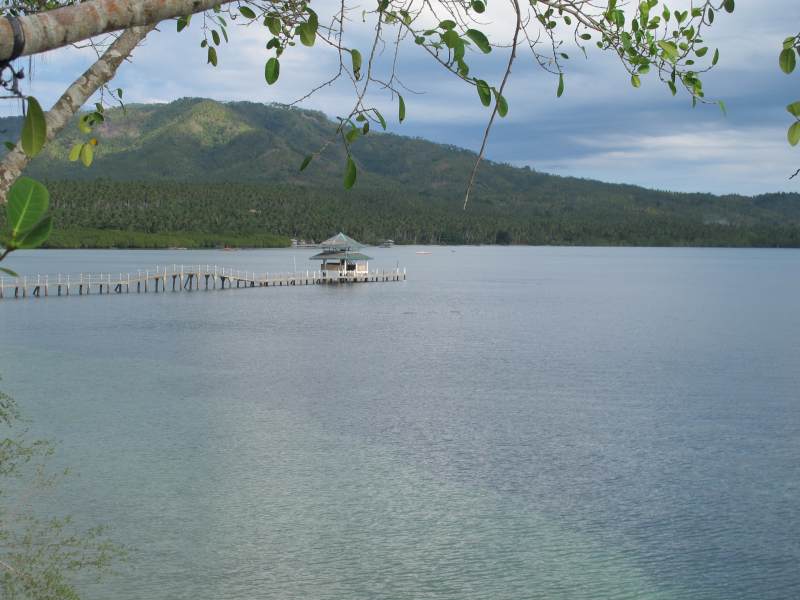 Worth mentioning is the Cinco Masao Beach Resort. Unfortunately, they also have only a Facebook page. Here in the Philippines, Facebook is so widespread that many companies no longer invest in a real website, but use only the free media Facebook. This might be OK for local tourists, but not for the ones from overseas. 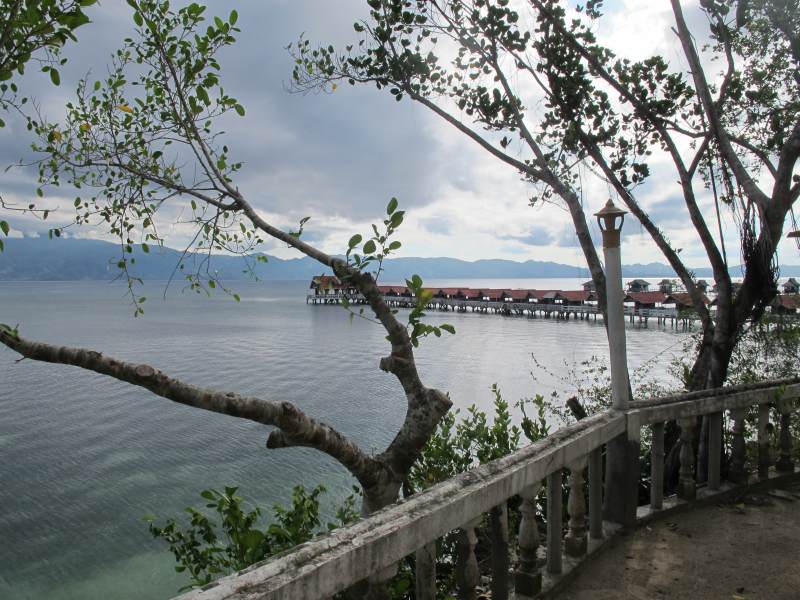 What looked very nice from a distance, turned out on closer inspection as a ramshackle “almost ruined”. As we found out later in the evening, most of the resorts here have big economical problems.  The distance from Davao, 4-5 hours by bus, is just too far for foreign currency-bringing vacationers. The flights between Davao and Mati were set a long time ago. But we’ll check again in December, during peak season.

We decided for to drive back to Mati, because the upcoming thunderstorm already had changed the color of the waters. 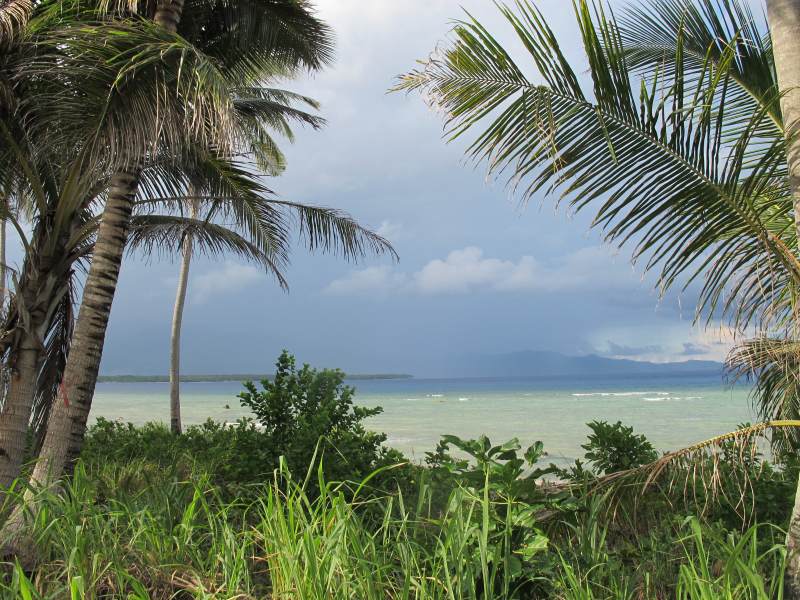 We were lucky. The storm battered the hinterland upwards to the Compostela Valley. We were only given a few drops.

We then examined the Mati Baywalk Hotel. This is, as the name implies, at the Baywalk, a beach promenade in the district of “Sibala Village”. What we found was a construction site. They offered us a room for 800 pesos, but to stay between concrete mixers and jackhammers in an old building, was not exactly what we were looking for.
It would have been useful to have visited this site before our trip: http://mati.gov.ph/IT_MatiOffice/where-to-stay/

Now good advice was really needed. We drove off in direction of the district “Población”. In front of a hardware store my Navigator then asked one of the locals. He recommended the “Casa Rosa”. Without further ado, he jumped on his bike and showed us the way.

The “Casa Rosa” offered us a motel room with hot water, aircon and cable TV for 1,000 pesos. We accepted with pleasure.
The “Casa Rosa” has a rudimentary Facebook page. We now have the street address and phone number: Dona Rose Street, Madang. Tel. No. (087) 811-4082 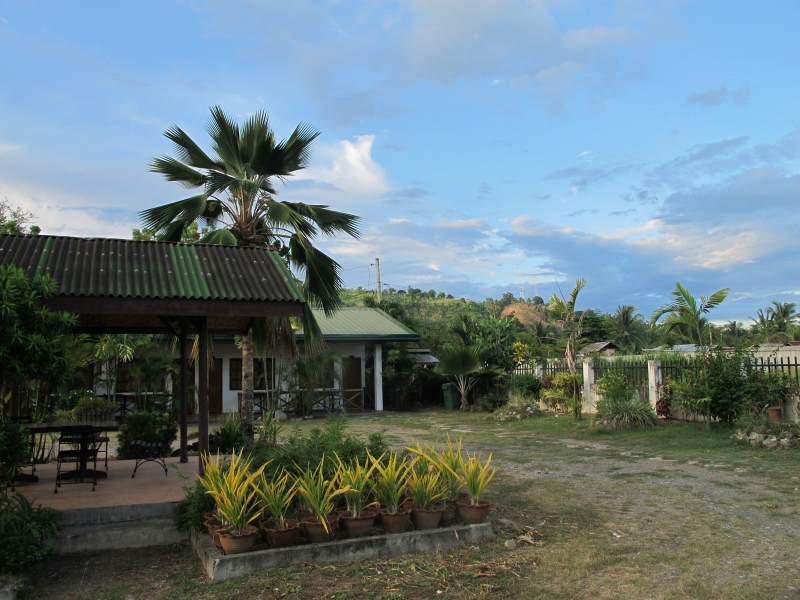 The Casa Rosa is located just outside the city almost on the sea shore. 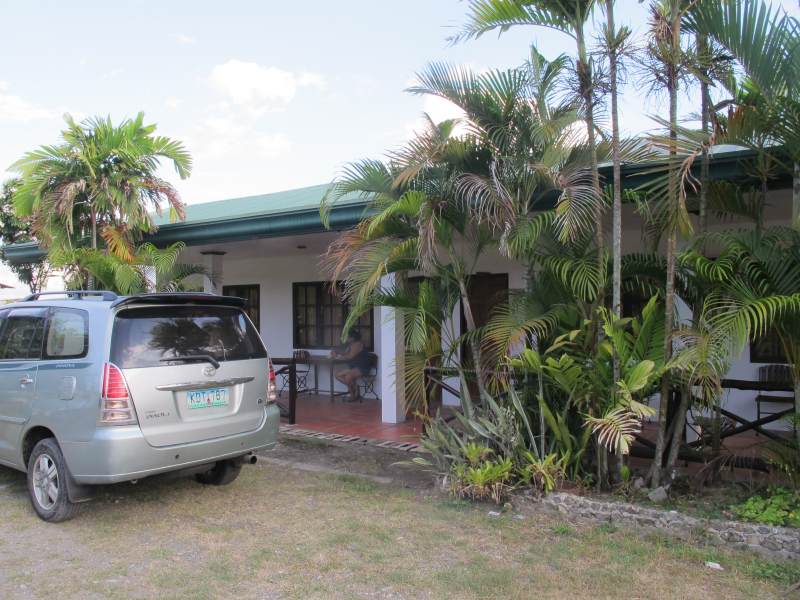 The car can be parked right outside the room, so I call the house a motel. Officially it is run as a Bed & Breafast. More information after dinner. 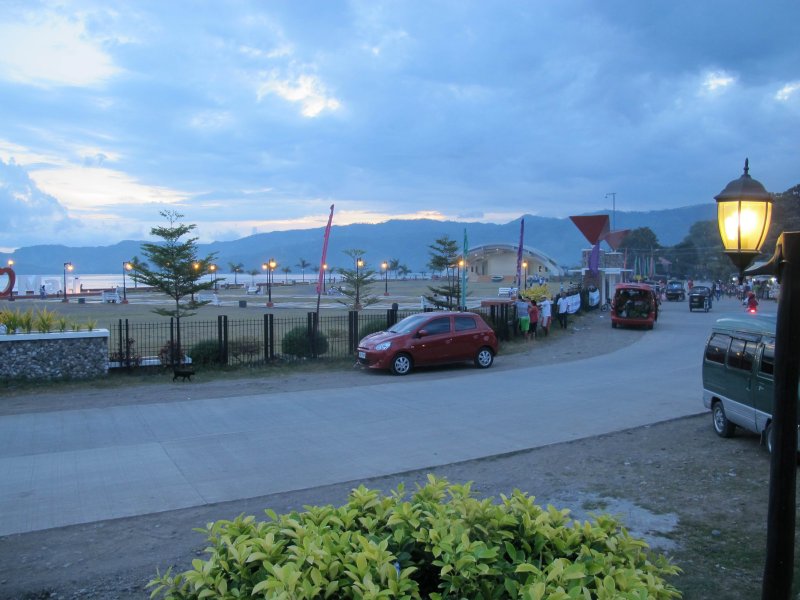 For dinner we went to the Baywalk and searched the Ciangi restaurant which had been recommended by the manager of the hotel.
The Baywalk looks really good if you consider to be in deepest province. The Ciangi was easy to find. 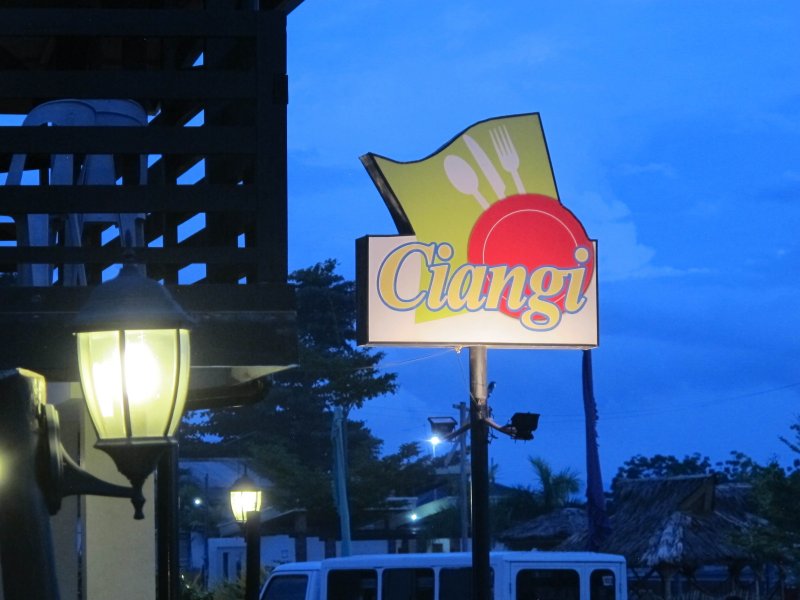 The Ciangi is just mutating from one eatery to a restaurant. It consists of two bars and two terraces. The food, however, apart from the BBQ, is still pre-cooked and presented in dozens of pots. We look forward to our next visit in December. 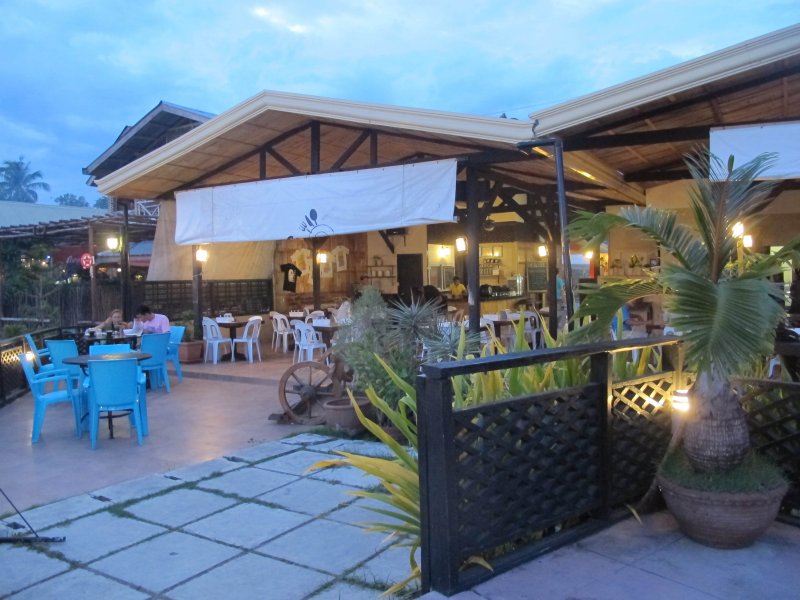 The Mixed grills were very good and the beer was chilled!

The night came, as usual, very fast around 18:15 p.m. Air had cooled down to a pleasant 32 degrees. At 7 o’clock we returned to the hotel. Before we bought a multiple socket, because I had noticed that only one outlet was available in our room. 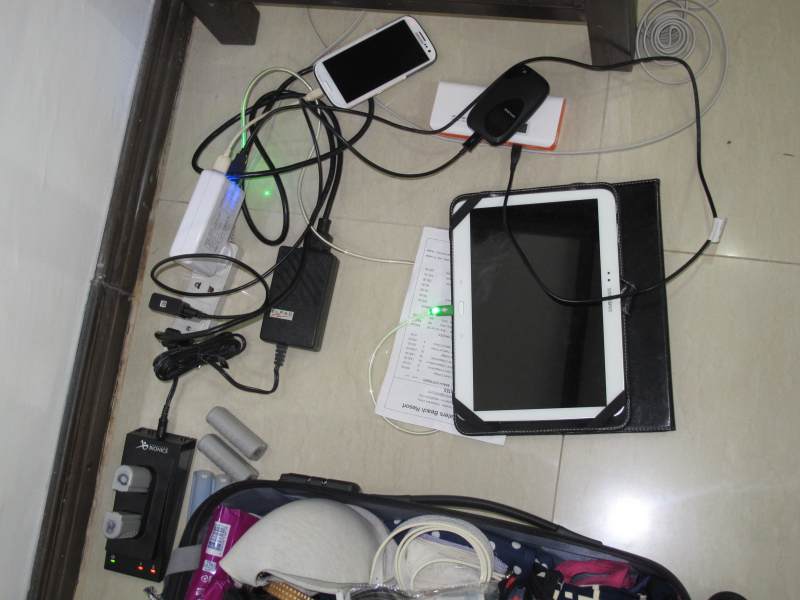 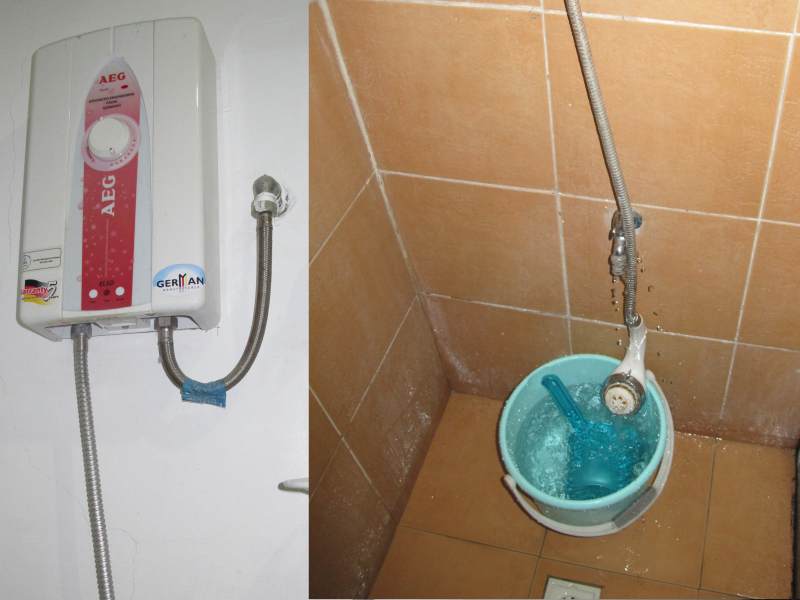 The shower had really hot water, heated up by AEG. Only the tube of the shower was so full of holes that we had first to fill a bucket and then use a taboo. Sometimes such a taboo shower is quite funny.

In Mati seems to be a hot spring and a museum where a whale skeleton can be seen. We’ll come back to this enchanting place. Then I’ll probably take a flight with a local ultralight plane and go diving with hammerhead sharks, manta rays, dolphins and manatees. Island hopping to the 3 islands Pujada, Waniban and Oak Iceland. A stay of 2-3 days is highly recommended.

Tomorrow we’ll drive to the east coast and Boston