The 2016 Drought still haunts the southern islands of the Philippines. Elder people here in Camiguin say that this year is the worst one since 1982. Even 1998 had not been so dry.

The title photo shows the Way of the Cross on the slope of Old Vulcan Daan. Photo taken on May 11.

Although the 2015/2015 El-Niño has vanished, we haven’t had any rainfall in Agoho since February 25 – 12 weeks ago! All Camiguin is dry, extremely dry. Many barangays do not have water anymore or had to reduce distribution to a few hours per day.

The well known hot and cold springs are starving. With exception of the Sto. Niño cold spring in Catarman, all other springs are either dry, have low water levels. The famous Bura Soda Pool is awfully smelly because of the low water throughput. The water isn’t clear anymore and people hesitate to swim or seek relief from the heath. The Hibok-Hibok Ardent Hot spring’s water is low and has the same temperature as air has.

No, I won’t write of global climate change and its reasons. I do not have enough knowledge. I can only write about my own local observations.
Camiguin still has water, in some places even abundant water. Compare the rather low Vulcan Daan 671 m (2,201 ft) with the rather high Tres Marias 1100 m (3,609 ft)

These pictures have been taken the same day – May 11, 2016. Vulcan Daan, laying the extreme north-west of Camiguin, gets no humidity from the easterly wind flow. Its slopes are dry and brown. On the other side The Tres Marias, Mount Mambajao and Hibok-Hibok volcano receive humidity in form of clouds and some short local showers.

These mountain waters unfortunately do not flow evenly distributed. On the left image the waters of the Tuasan falls are still flowing abundantly while the Katibawasan falls are rather thin.

A common fact of both waterfalls are the dry lowlands. In Catarman all the fields are dry. The banana plants are losing all their leaves. Corn is brown and without fruits. Coconut trees also lose leaves and produce almost no coconuts. Rice fields are not ready, although we should approach already the second harvest of the year. A few rice fields with well studied irrigating systems are still growing and producing.

Man made reason #1: No network

Each barangay has its own water supply (supplies), but there are no interconnections between the communities. A sample for this problem are the barangays of Bug-ong and Agoho. The first has almost no water anymore while the second still supplies every house with enough water. Two simple water pipes with valves would resolve this problem. There is no need for expensive equipment. No pumps are needed, simply two downhill water pipes would help the neighbours.
Problems become more complicated when the neighbours do not have enough water for their own people and plantations. Kuguita can not get water neither from Bug-ong nor from Tagdo or Baylao. To resolve their water problem, a dam or rainwater tanks would be needed.
A circular water line around the island would be the best but also the most complex and most expensive solution. Pumps would be needed and permanent maintenance would be a major requirement.

Man made reason #2: No storage capacity

There are almost no water retention systems on the island. The few ones are the two Sabo dams in Mahinog and some reservoirs. These reservoirs are all too small. Their main purpose is to purify water from sand and other solid items. A second purpose is to equalize water pressure. The Sabo dams had been built in 2011 and prevent flooding of the lowlands during heavy rainfalls. 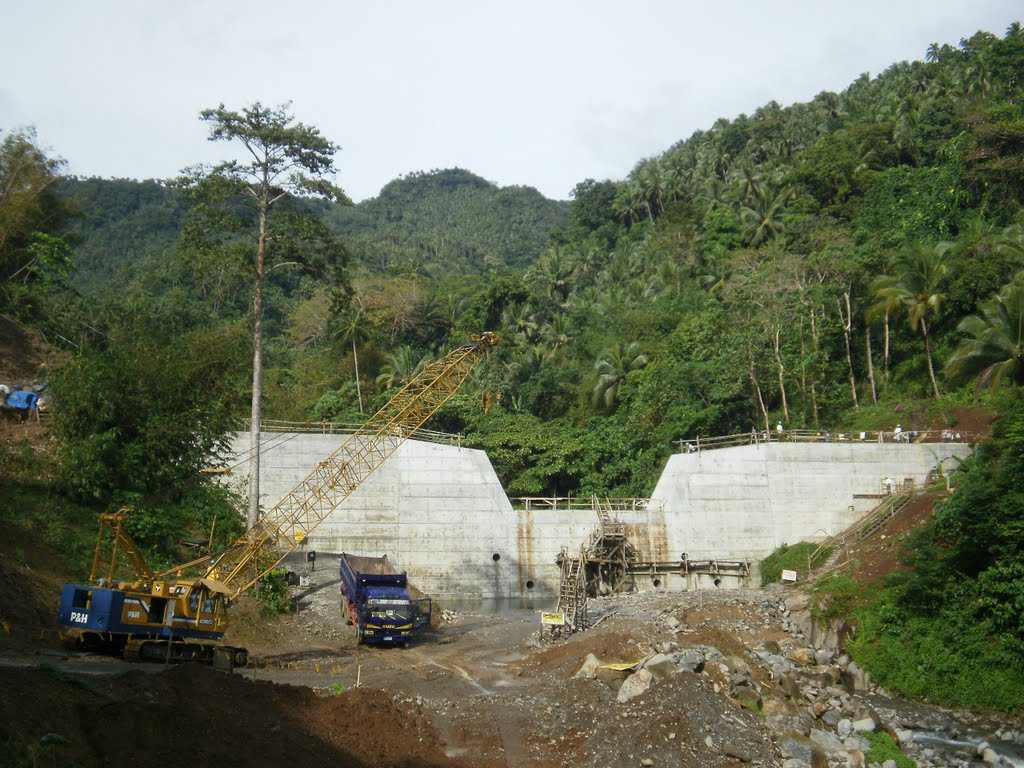 Few people, most of them are foreigners, have started to build small to medium rainwater tanks. The biggest we have seen is Hampi’s tank on Panglao island. It is in the underground of their house and can stock up to 24,000 litres of rainwater. Rob’s tank up in Itum is a ‘bit’ smaller.

Unfortunately in some barangays owners of fresh water tanks are punished. In Agoho a household pays 60 pesos per month for water supply independent of the consumption. Owners of a fresh water tank pay 200 pesos. Why? Even the managers of the water district have no other explanation then it had been decided.

Another bad idea came from Pagasa’s Rosalina G. de Guzman. In a presentation she proposed among other solution the creation of “Farm ponds, small water reservoirs, and lakes”. The mosquitos would be happy to lay their eggs and increase the danger dengue. The only solution are underground and fully closed reservoirs.

In the last weeks many wildfires broke out all around the island. Some ones on Hibok-Hibok volcano were triggered by rock falls which ignited the dry leaves. The falling rocks created enough sparks. Others were the result of careless smokers and devotees. The latter ignited the whole Walkway of the Cross on Old Vulcan Daan. Flying sparks did the rest. These fires did also endanger houses on the beachfront, but the fire workers could preserve the dwellings and master the fires. 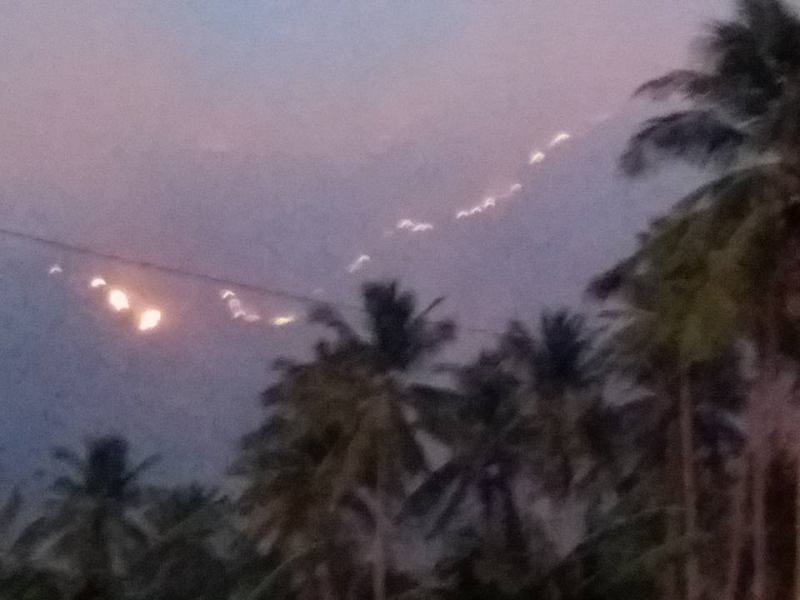 Photo courtesy of Nelva Paculanan
But if there is no road nearby, even the toughest guys can’t bring enough water to kill the wildfires. 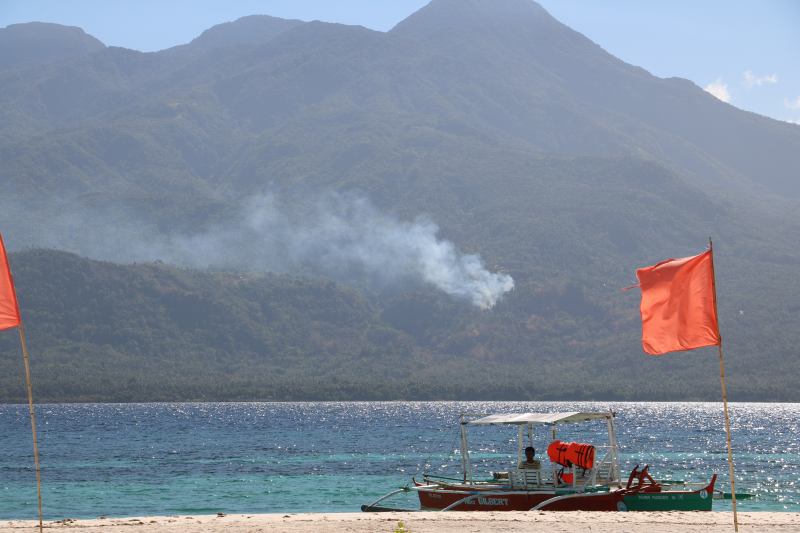 And by the way, wildfires aren’t so bad when they are far away from houses and plantations. They are somehow a natural renovation event, burning old or dense vegetation. They leave behind mineral rich ashes that allow juvenile plants to grow.

The current drought will persist until the monsoon seasons change. When Amihan finally swaps over to Habagat, more humid air will flow up the mountains and will bring rain. We expect this swap in about 2 weeks – end of May or begin of June. The el Niño has already stopped. Some zones of the Pacific surface waters are already below average temperature. Here are animated thermal movies of the ENSO effect. But talking of La Niña, as some politicians and press are doing, seems a bit too early. The last fast switches from El Niño to La Niña happened in 1954, 1964, 1970, 1973, 1988, 1995, 1998, 2007, 2010.

We hope that the transition will be smooth. The dry and hard soils cannot absorb big quantities of water. But landslides are to be expected especially where the concrete madness did hit our island.