It is really difficult to find information about this region of Mindanao on the Internet.  And if one finds, it is only superficial information. This day has by far most impressed us. But first today’s map: 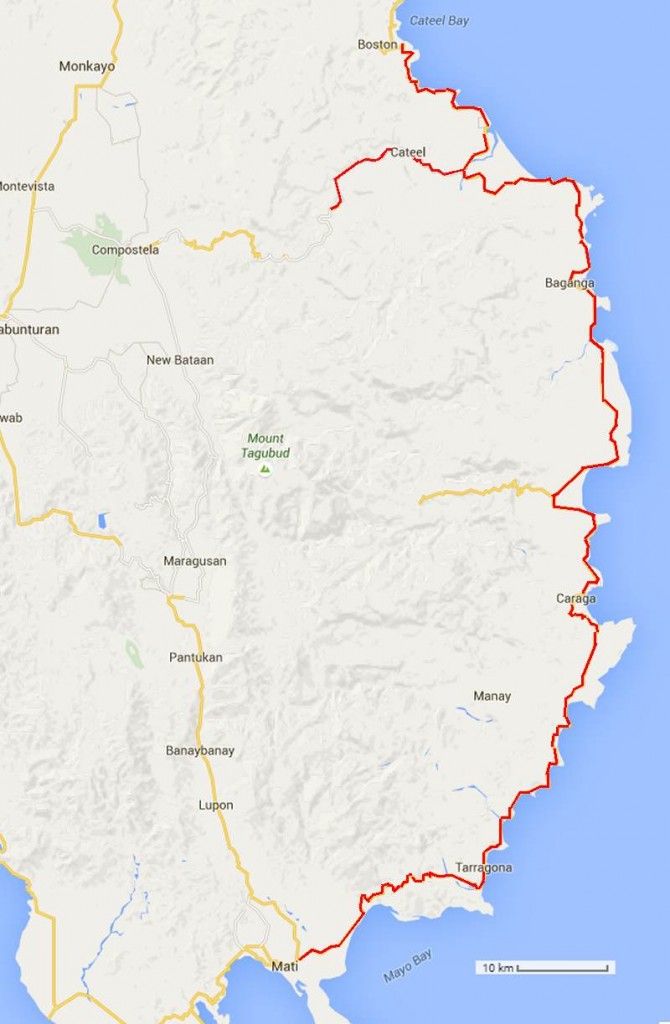 Let’s start with the breakfast at Casa Rosa Motel. There had been no choice! Breakfast consisted of rice, dead fish and an egg and watermelon. To wash down we had to chose between Nescafe and water. This had been the first but not the last rice today.

At the same table a traveling salesman was eating his breakfast. What he sells, I do not know, but he told us that he was responsible for the Caraga Region – the east coast all the way up to Surigao. When he heard that we would drive by Caraga Town to Boston, he warned us urgently, absolutely to eat or drink nothing in Caraga Town. The locals there were said, to mix drugs with traveler’s food and drinks. This drugs Would make you stunned and transform you into mindless zombies. I grinned inwardly, but my face showed no reaction. Butch, also known as my navigator, made a very shocked face. One can often hear such stories in the Philippines.

At 7 o’clock we were already on the road. The excellent highway at the south-eastern and eastern coast was almost without traffic. The important north-south link from Butuan to Davao runs inland. Almost no traffic means that we might have seen 80 other cars on this 234 km journey.
First we drove in the lowlands through vast coconut plantations. After a few kilometers, the road began to climb into the hills. 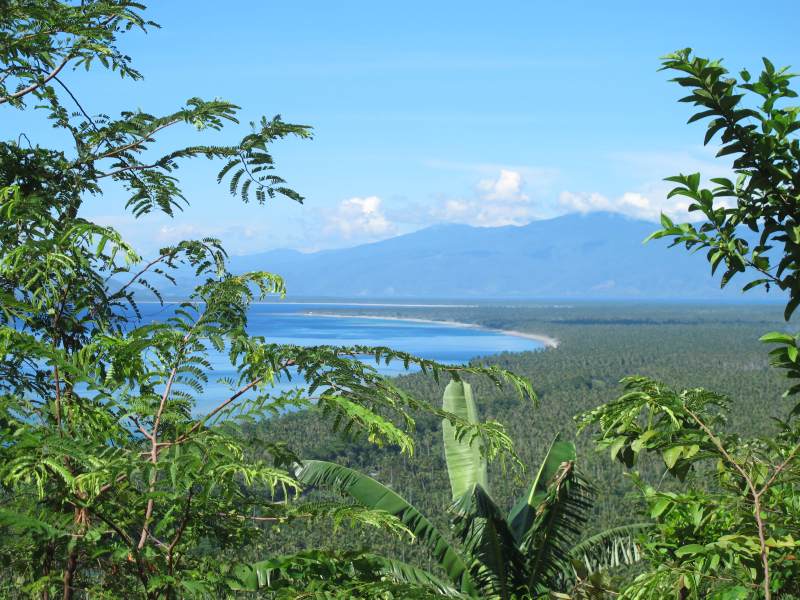 From there you have a beautiful view over Mati and the whole landscape. 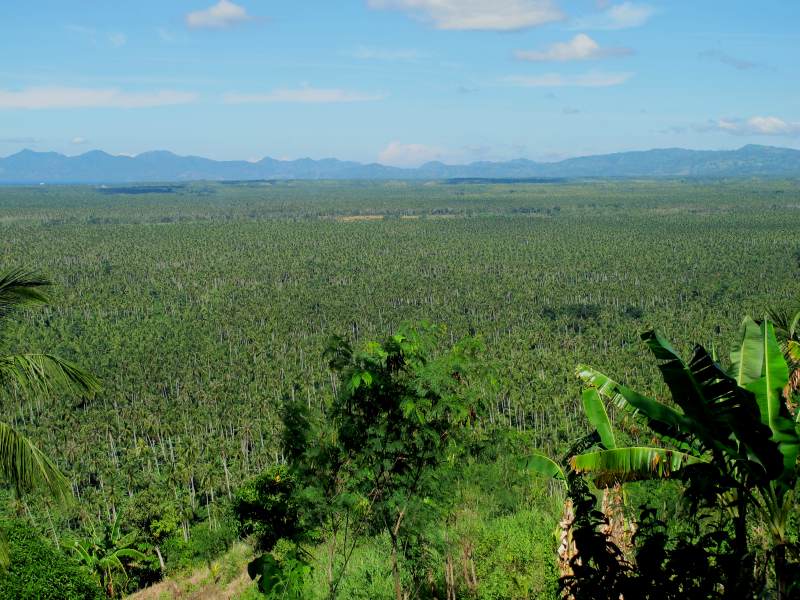 From up here you can also see the huge expansion of the coconut plantations. 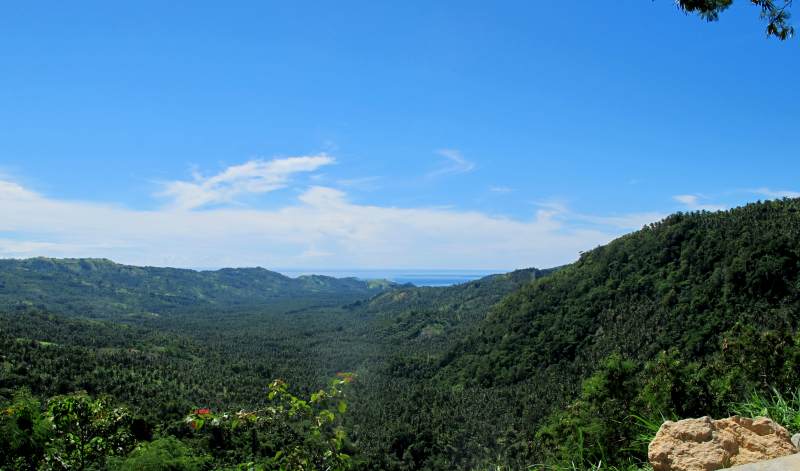 The winding road rises to almost 500 meters above sea level. The most south-eastern point of Mindanao. 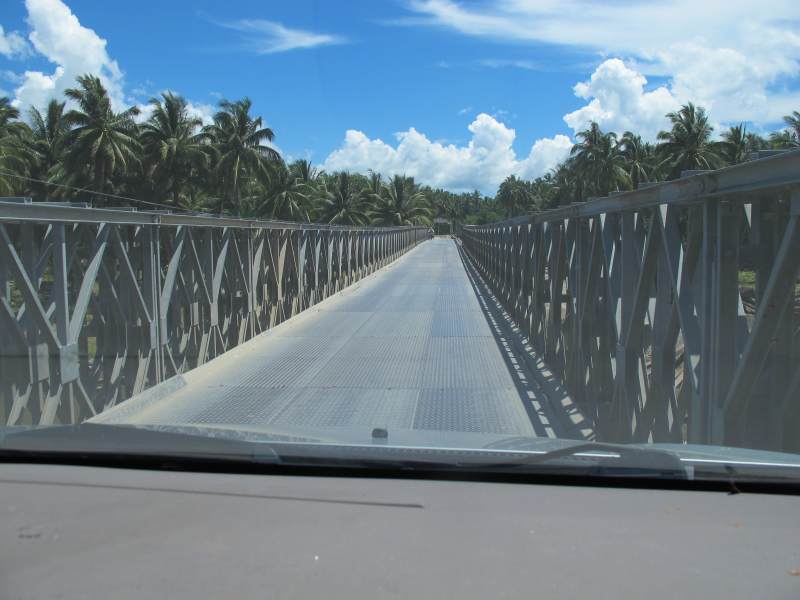 Approximately 7 km before Tarragona we were surprised by this professionally built makeshift bridge. 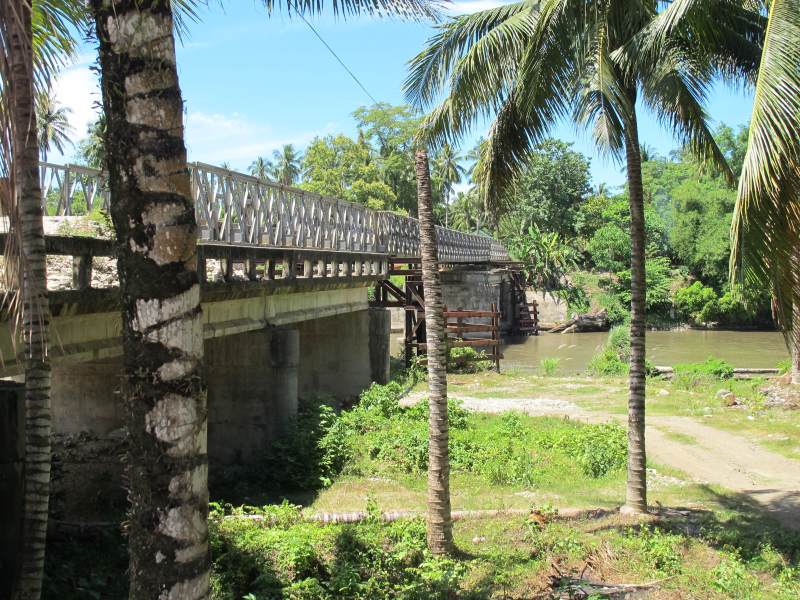 At this time we did not yet know that today we shouldt often see such bridges. 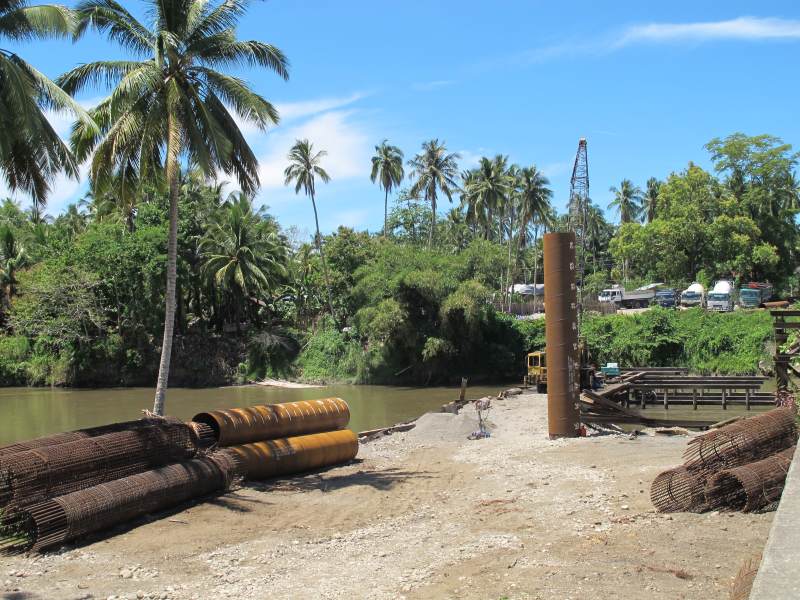 On the other side, a new bridge is being built. 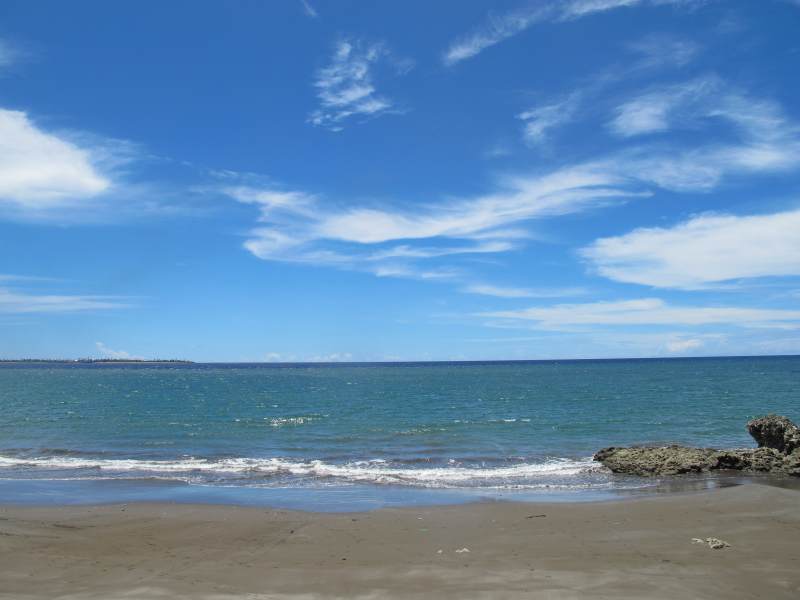 After Tarragona you will find kilometers of beaches. There are sandy beaches – others consist of flat slabs of rock. All beaches have one thing in common – they are all totally deserted. Here you sit on the beach and look at the vastness of the Pacific. And when you consider that the view straight out goes over 16,000 kilometers of water, then you will feel tiny. 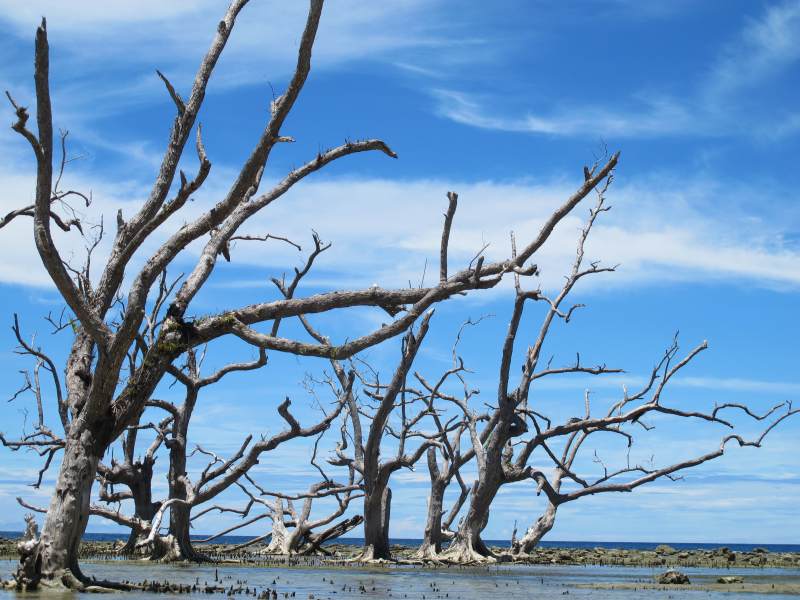 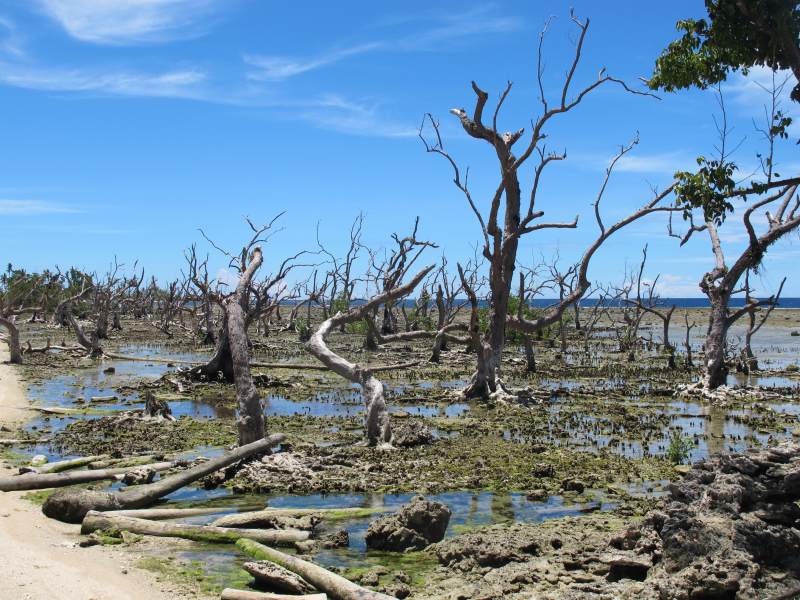 On a stretch of several hundreds of meters on the beach one sees these trees standing in water. I took this pictures at low-tide. And when you turn around and look inland, you see very few coconut trees and a few broken palm trees. No trees but plenty of young, green vegetation. Something is wrong here … 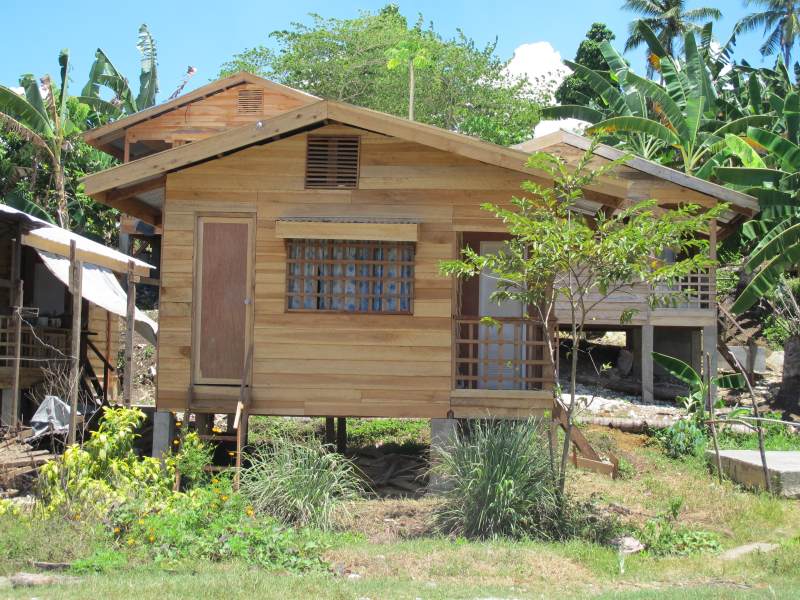 A few kilometers further we saw then the first settlement. Everywhere were these pretty chalets. The basic structure was the same in all the houses. Nevertheless, each had his own, personal items and decorations. And then it occurred to me suddenly:

Bablo is the local name of the devastating super-typhoon Bopha. At 5 o’clock in the morning on December 3, 2012 the monster was here, precisely in Baganga, and thundered ashore. Its eye was at that time 27 km wide. The storm had a maximum diameter of 775 km and a maximum height of up to 17 km. In 2012 I had closely monitored the storm, because during 3 days the forecasts had shown that Pablo/BOPHA moved exactly in direction of Camiguin. Here begins the reporting  in my blog. Below are two pictures of those days. Source is Wikipedia. 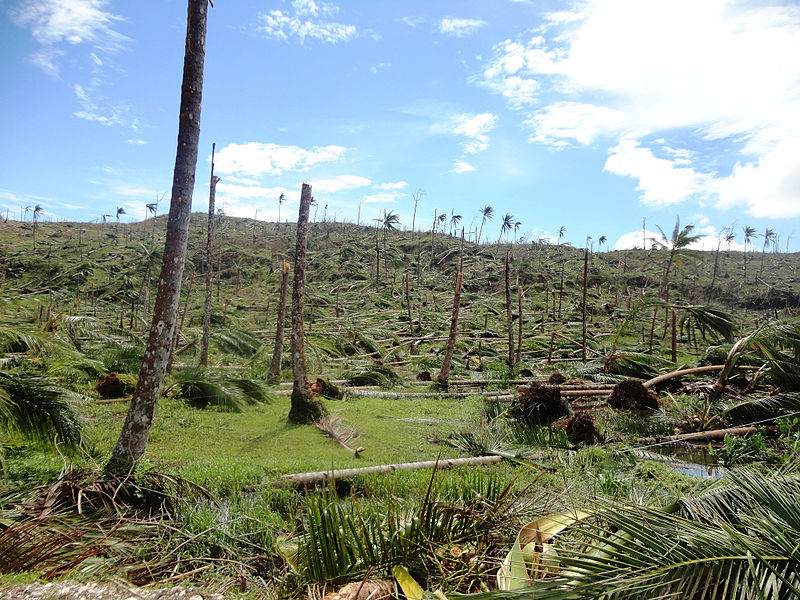 Photo by Sonny Day from near Cateel. 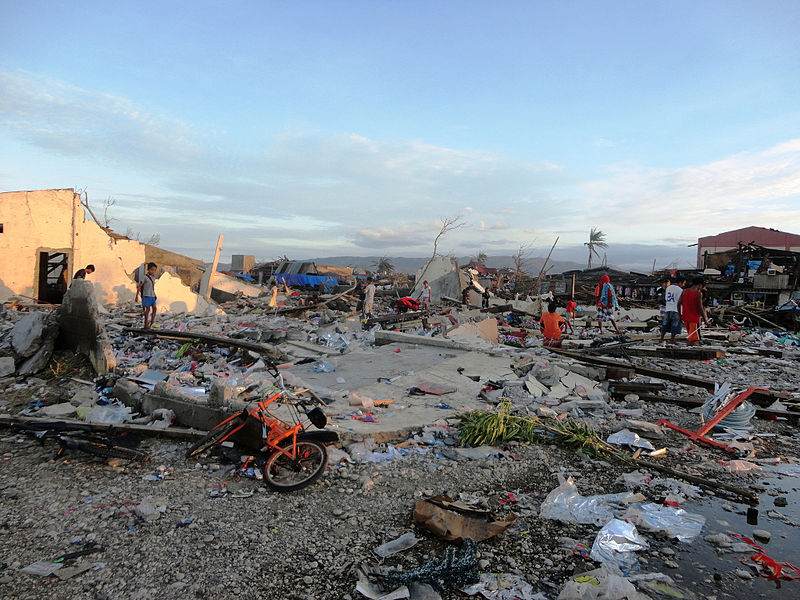 1067 people lost their lives in this storm. 834 are still on the list of missing persons.

On the following hundred kilometers we saw entire villages, which consisted only of emergency shelters. 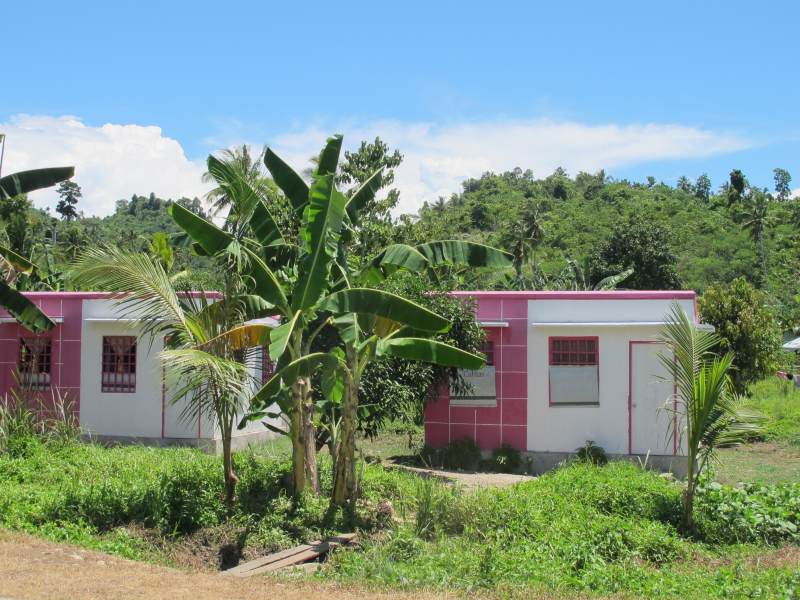 Depending on the organization, which had them built, we saw different types. 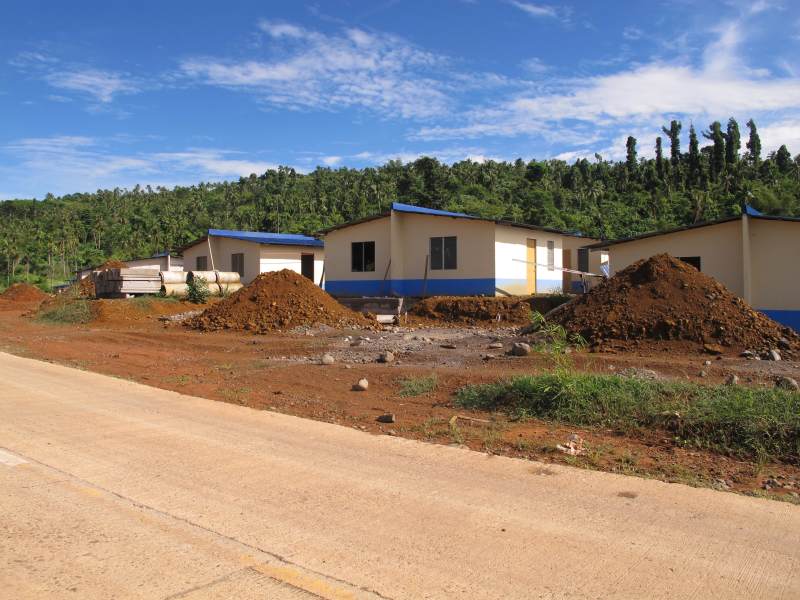 And still houses are being built. The smallest have a floor area of ​​16 square meters the bigger ones reach 25 to 30 m2. Whole villages have been newly created.

With this sights we had found the explanation for the excellent road and the many temporary metal bridges. The journey through this region has left a lasting impression.

Caraga town we passed by despite a rumbling stomach  (see the breakfast conversation). In Baganga, which was located in the center of the storm,  reconstruction is still ongoing. Shortly after we reached the junction of the coastal highway with the road going inland to Compostela and the valley with the same name. We didn’t think to drive as far as Compostela, but we wanted to see the Aliwagwag falls.

Only a short stretch of the road between Cateel and Compostela is already made of concrete. We therefore drove 40 km on more or less good tracks with many construction sites. Our Toyota Innova bumped without grumbling on the partial very uneven slopes. 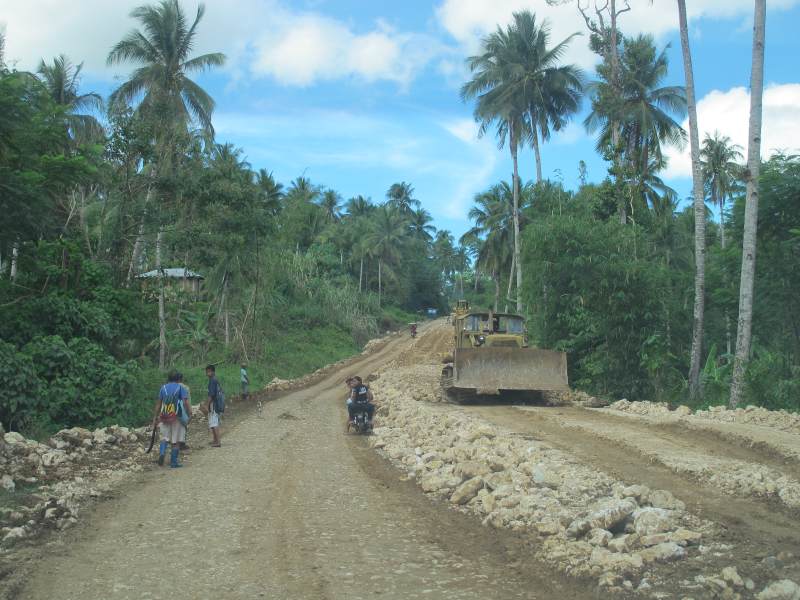 What we encountered in the bush very surprised us. The road was concreted and a first-class tourist infrastructure was waiting for us. After what we had seen on the last 70 km, we felt as if we were on another planet. 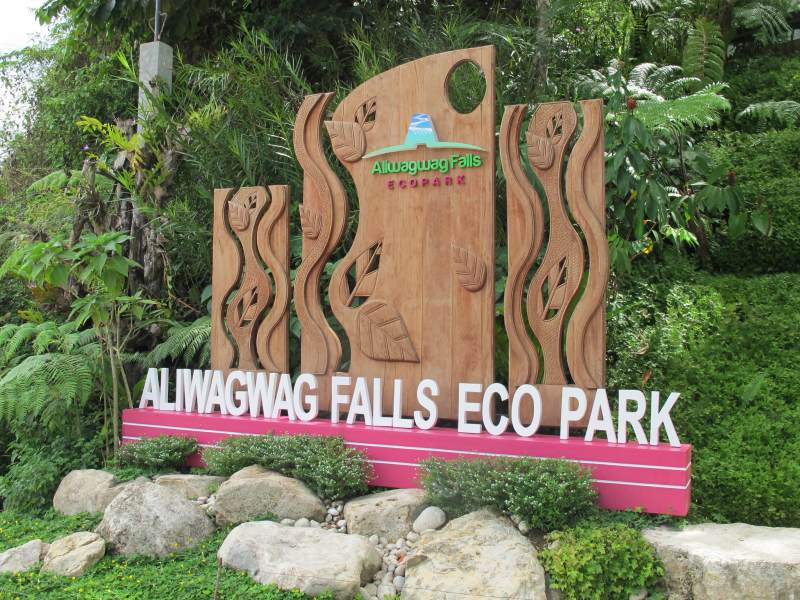 On the other side of the street were very clean toilets, still closed stalls and a “restaurant”. 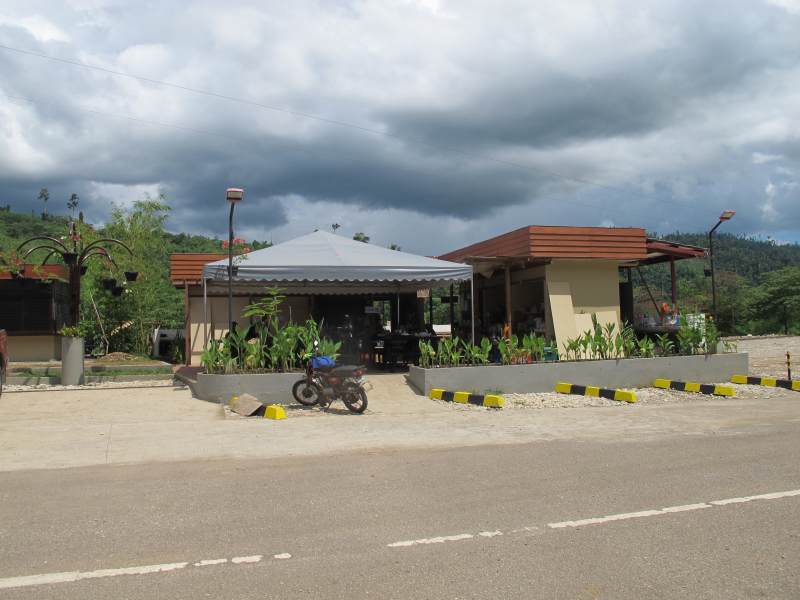 The “restaurant” was actually a “food court” round with 7 eateries around. 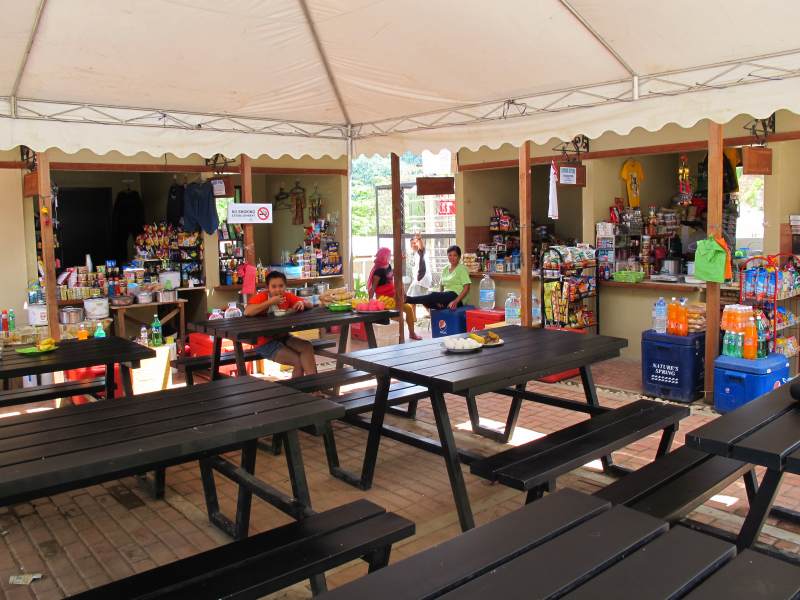 The offer was more than enough – either rice with fish or chicken with rice. And of course, the usual Pinoy snacks and soft drinks. Luckily one of the ladies had cold San Miguel beer. So I could wash down my rice with chicken with a decent liquid. This was my second rice today. Then we looked at the waterfalls. 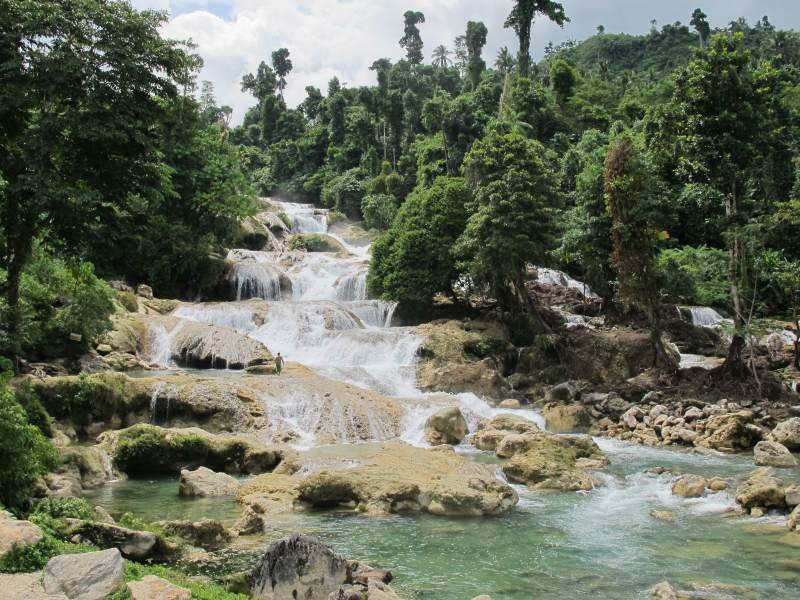 We stayed at the lower part of the falls. Further up you will find natural pools and zip lines. The paths are probably only a few weeks to months old and therefore in very good condition. On our little walk through the falls (without camera), we only encountered two other people – locals. 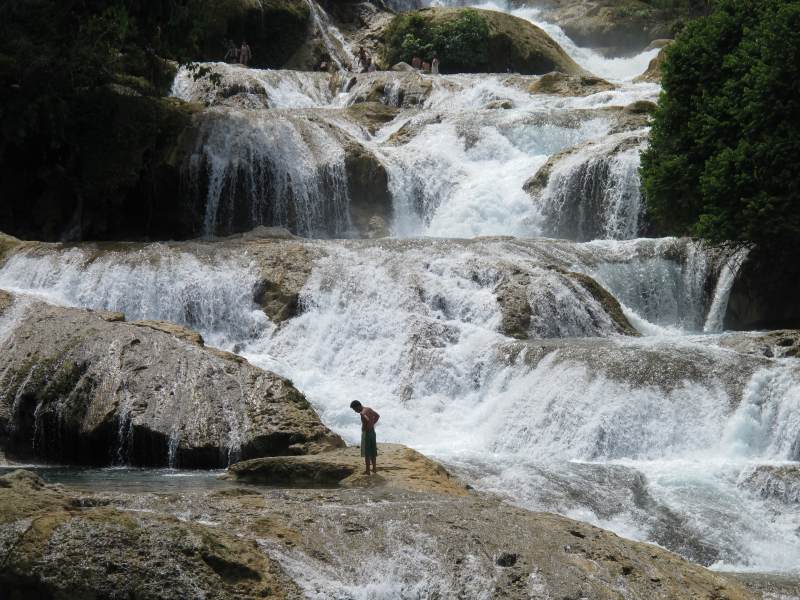 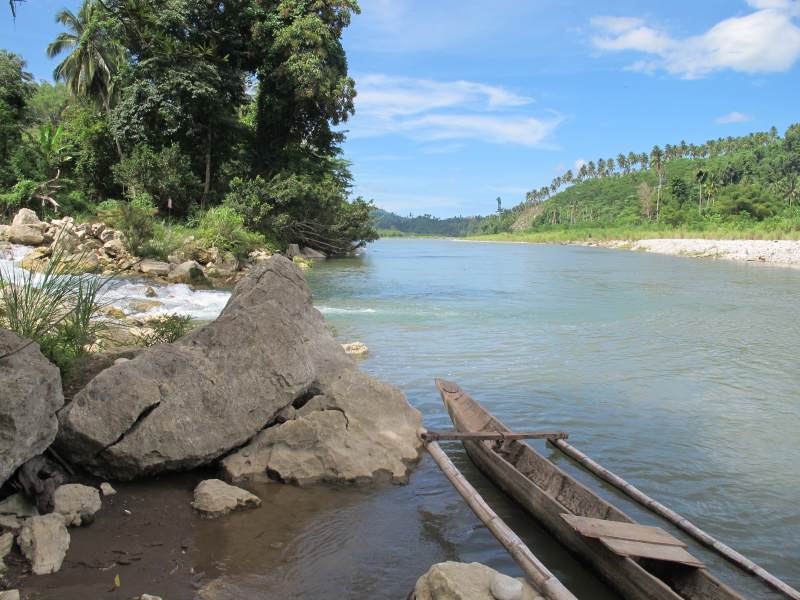 After the falls the water flows in the Caraga River, which we had already crossed on the coast. One can already buy and rent kayaks and canoes. We probably will do it during our next trip. But then we’ll stay at least for a full day at the falls.
We returned to the coast by the same rough road. On the way I wondered, why such a big tourist attraction is being built here in the bush. The next two big cities with airport, Davao and Butuan, are more than 4 hours away. Will they some time in the future be able to attract enough tourists? Beautiful waterfalls are many in the Philippines. And you can sleep nowhere between Mati and Boston. And in Boston – no, that comes later. 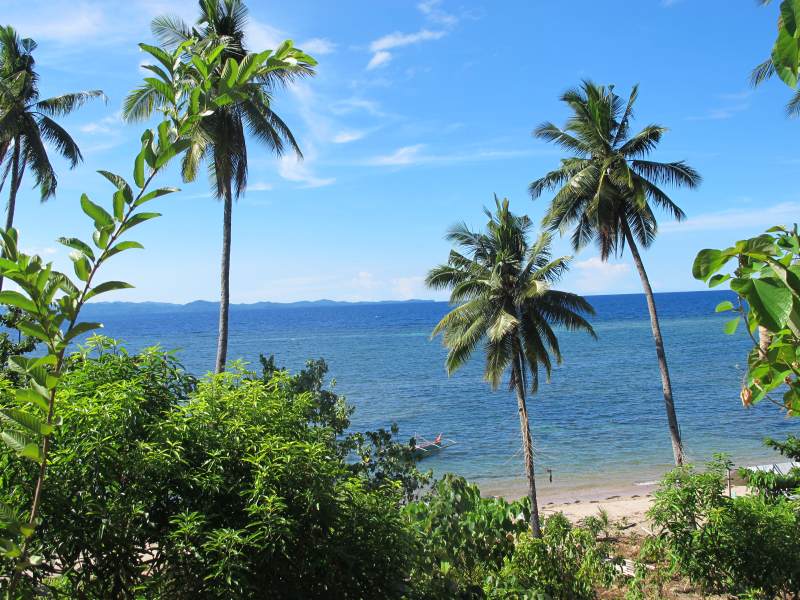 On the short remaining distance, we again saw very nice beaches. Some palm trees also had  survived the inferno of 2012. 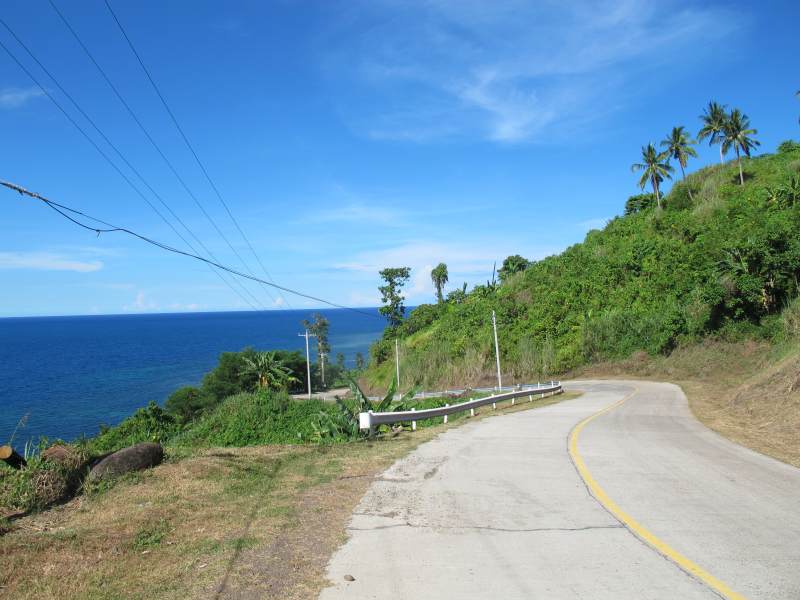 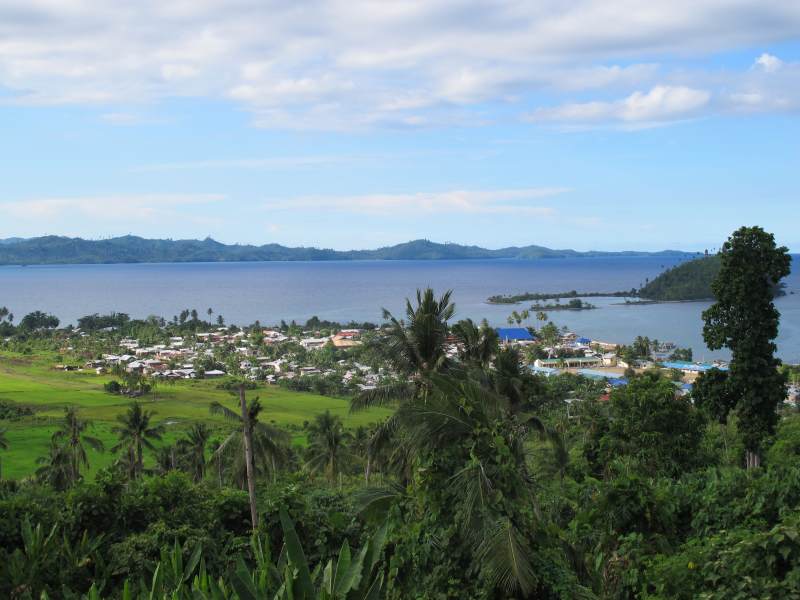 About Boston I’ll write more tomorrow. Here only a brief information about accommodation. Before we left Camiguin Steven, an expat from California, had informed me that there were some nice guesthouses in Boston. Unfortunately, I missed it, to ask him about the date of his last stay there. A big mistake! There is only one hotel in Boston. It had been opened in March 2015. All Boston had been destroyed in 2012. 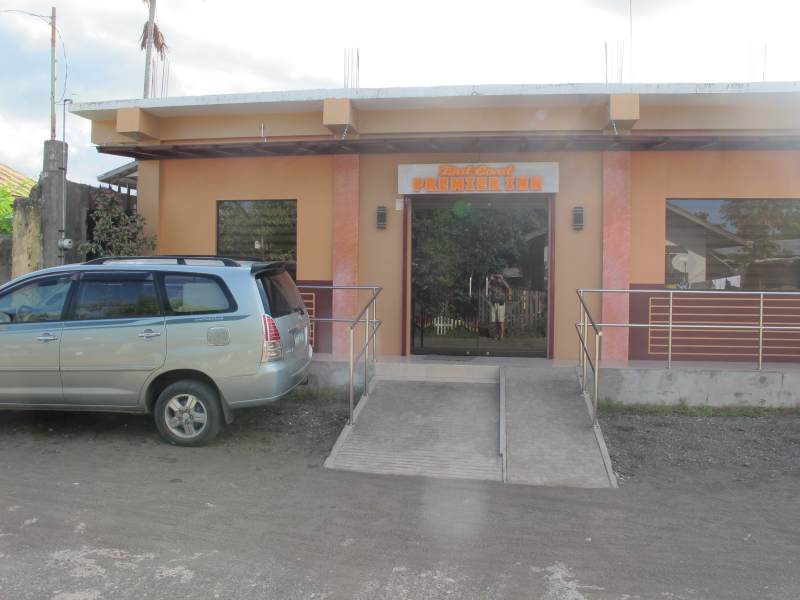 We stayed at the East Coast Premier Inn.

If someone among the readers is planning to go to Boston, we recommend to contact the owner, Daisy G. Castillones in advance. Call: 0917 310 3236 or send her an e-mail: dgcast@yahoo.com.
The inn could be closed due to lack of demand!

The night cost 1000 pesos. The room had aircon and a small bathroom with warm water. Satellite TV (Cignal) is available in the lobby, which rather resembled a living room.

My dinner was very good, rice with grilled chicken. Rice to third today. Slowly but surely I am becoming a Pinoy.
About our night in Boston I write you tomorrow.

Summary of the 6th day:

Landscape: Very hilly to flat, mostly along the sea
Interesting: landscape, Aliwagwag Falls
Street: Excellent Condition, very rough road to the Aliwagwag falls, no traffic at all!
Distance: 234 km, including the visit of the Aliwagwag Falls (40km)
Driving time: 4 hours

Tomorrow, we first show you Boston then we continue to Bislig