We had really enjoyed our stay in Boston. The warmth of its people and the beauty of the landscape have left a lasting impression. I want to go diving or snorkel around Cabugao island. However, after the typhoon , there is probably a coral graveyard to be expected.
But now first the map of the seventh day journey:

The way from Boston to Bislig is 64 km long. Add another 38 km for the detour to the Tinuy-an falls.
Early in the morning we found no open carenderia in Boston. And frankly, I had no desire for dead fish and rice. So for the time being I had to meet a KitKat and a cold coffee. A last look back to Boston.
On the short route from Boston to Bislig there is only one small town, Lingig. Shortly after Boston we saw the last reconstruction work. 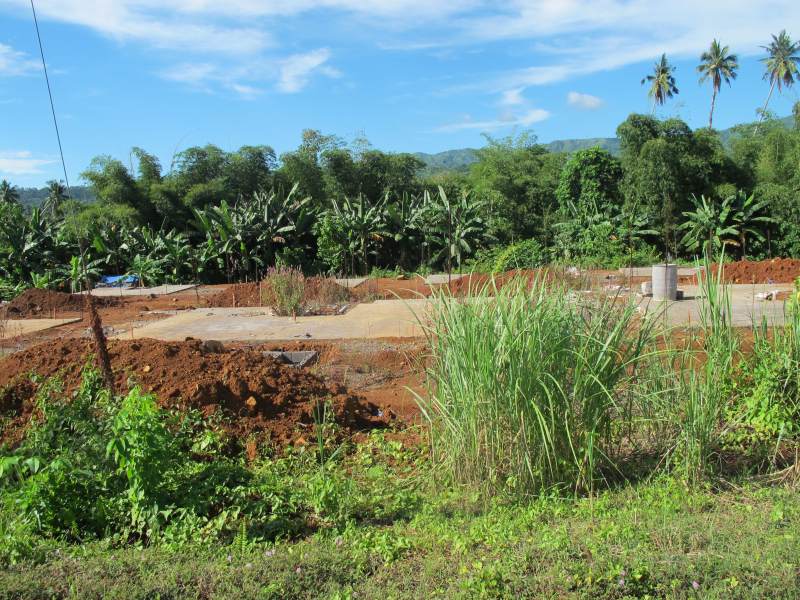 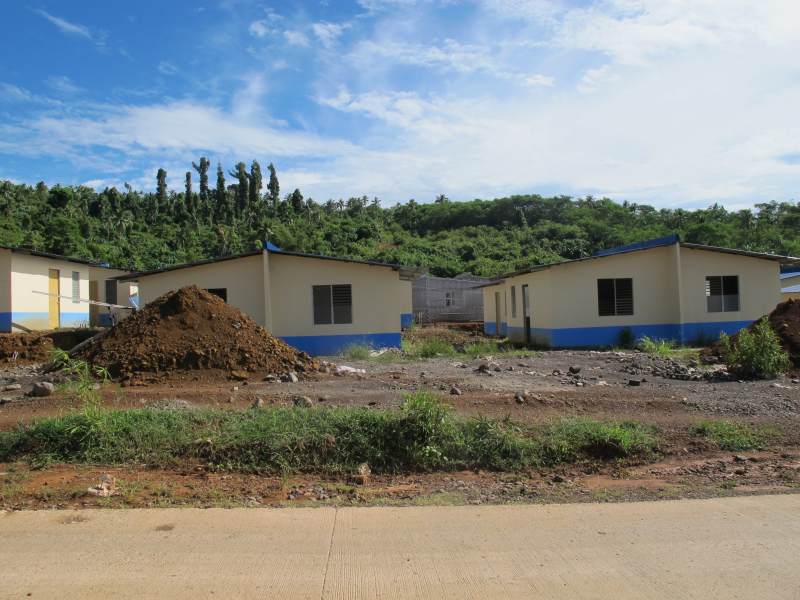 After about 15km we then saw again old, high coconut trees. From here, no more storm damage was then to be seen. Lingig is the southernmost Municipality of Surigao del Sur. In the small town on the Pacific coast, we enjoyed our breakfast. “Enjoyed” is a bit exaggerated: Nescafé, white US cardboard bread and two fried eggs.
We noticed a great difference between the populations of Davao Oriental and Surigao (Norte and Sur) . The people in Davao Oriental were much more cordial, more friendly and spoke next to their indigenous language an excellent Tagalog.  The people here in Surigao del Sur were grumpier and their Cebuano was barely understandable.
On the way from Lingig to Mangagoy (Bislig) we saw again HabalHabal on the road. They are ubiquitous in the northern provinces of Mindanao. There is such a “boom-motorcycles, which carry up to 12 passengers at the same time. The road through the hills was still good and besides the HabalHabals was hardly any traffic.

Bislig is a Municipality and a city (Población). Bislig City is much smaller than Mangagoy on the other side of the Bislig Bay. In Bislig city there is only one guest house. For this reason we have stayed in Mangagoy. At the turnoff to the Tinuy-an Falls one finds the “White Palace Inn”. From Palace was no trace. It is nothing more than a motel. The rooms are small but clean. Hot water is available but only in the owner’s room. 2000 pesos were absolutely too expensive. 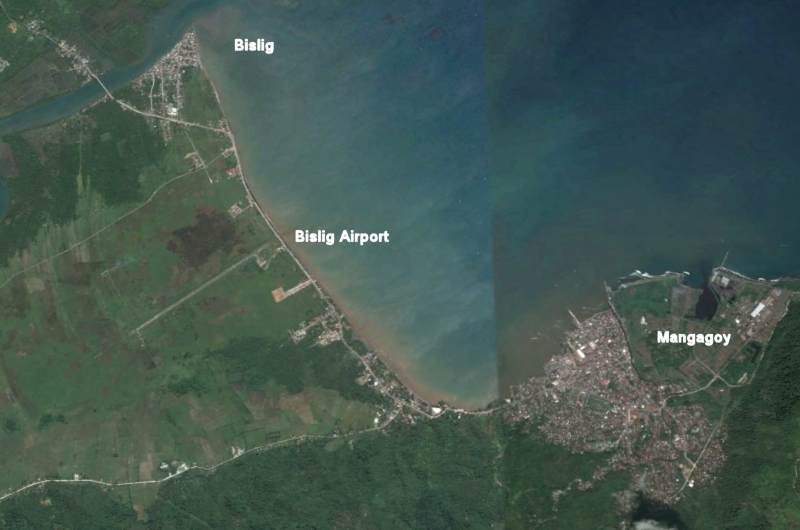 The difference between Bislig and Mangagoy is well visible on Google Earth.
We then asked here and there for a hotel or other accommodation.Everybody advised us to go to the “Paper Country Inn”. Since it is not easy to find, I have inserted a map. 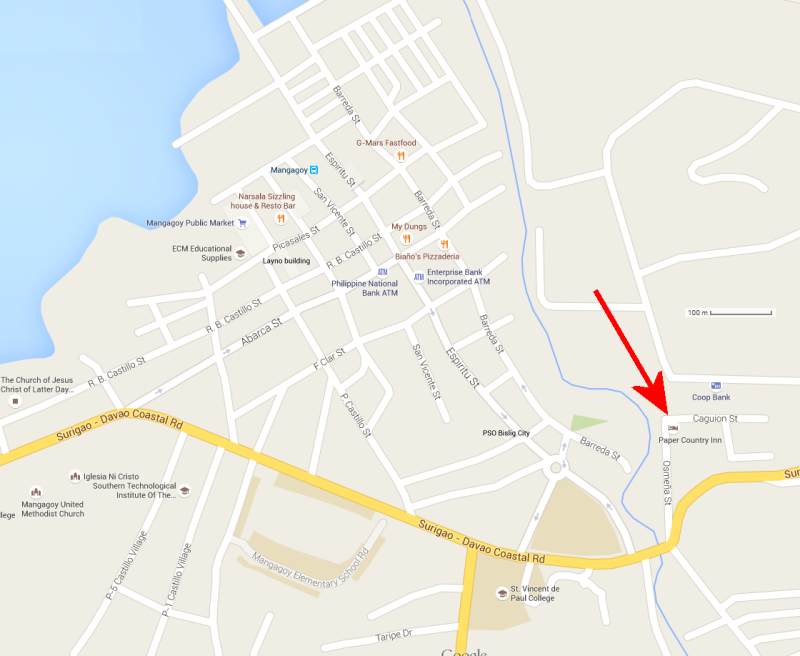 The hotel itself is quite good. As everywhere there is a lack of maintenance, but it was habitable. 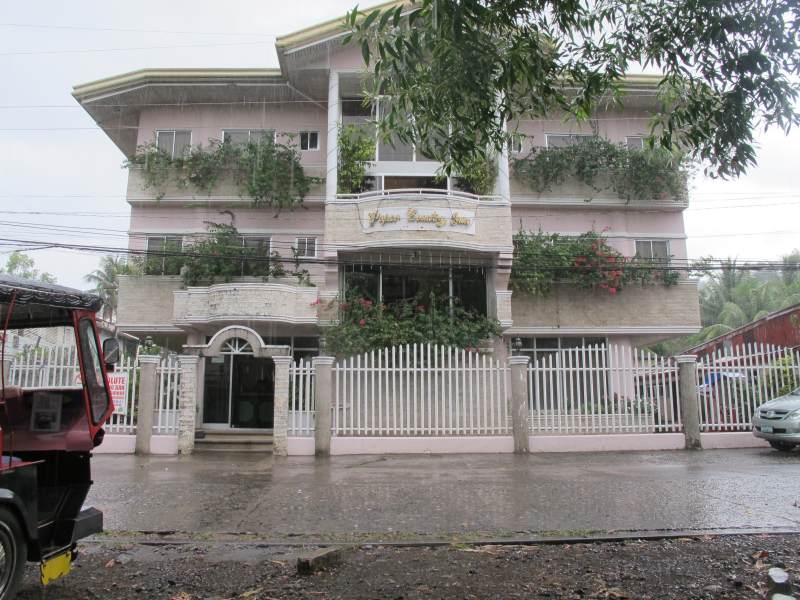 Only when I stood at the front desk, I had a flashback on Federico Fellini’s Roma. The lady at the desk had an unlikely similarity with the aunt from Fellini’s movie. Since I did not dare to shoot a photo in the hotel, I put here a still-photo from Roma: 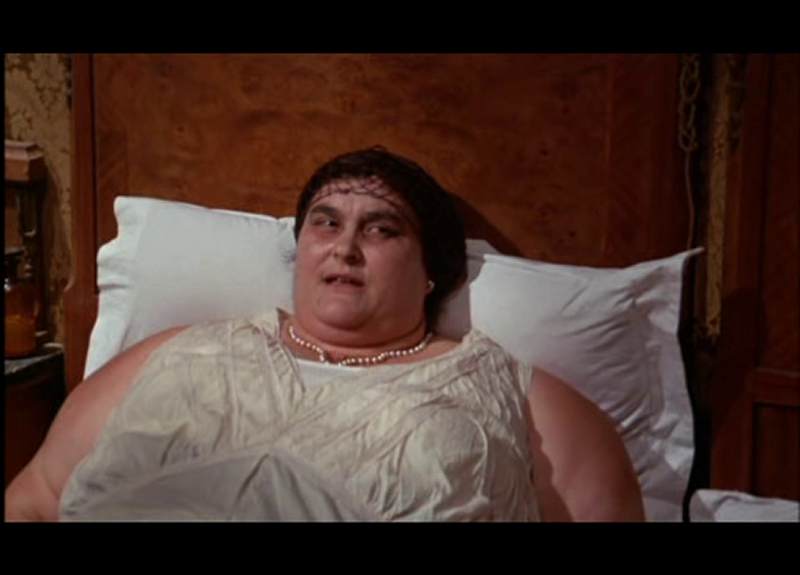 For this purpose, it is also worthwhile to read this review on TripAdvisor.
The dangerous shower head from 2011had been replaced by an even deadlier installation. 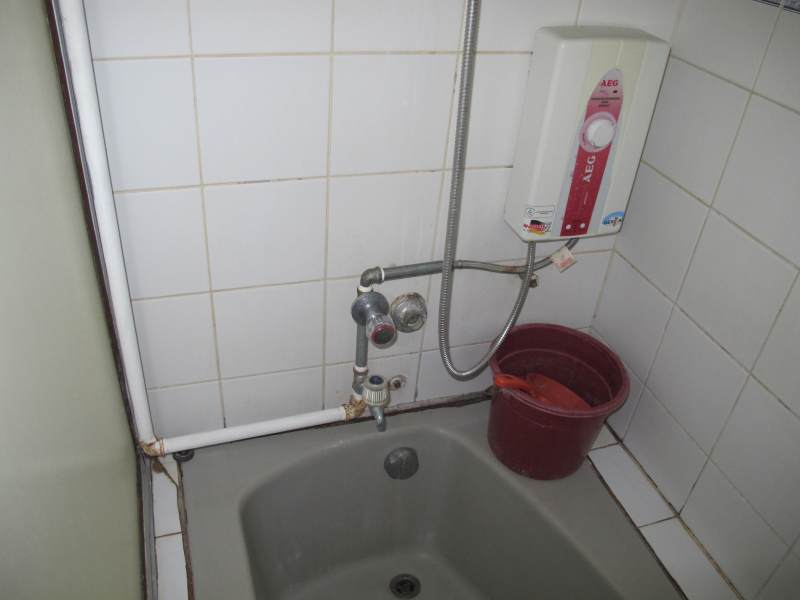 The water line was laid on the fly and vibrated and made a high pitched sound when water flowed.

From autumn 2011 to May 2012, MidSea Express not only flew  Wednesday, Friday and Sunday from Cebu to Camiguin but Friday and Sunday and from Davao to Bislig. This flights with a Jetstream 32 were soon thinned out and there was only the flight on Saturday from Cebu to Bislig and back. On June 1, 2013 the only aircraft of the Company was grounded by CAAP. Since then, there are no more flights to Bislig.
The runway 05-23 is only 1170m short. In March 2015 we heard rumors that PALexpress will fly with its Dash-8 Q400 to Bislig. That seems to be the same ghost flights, such as those to Camiguin.
Today the airport looks like this: 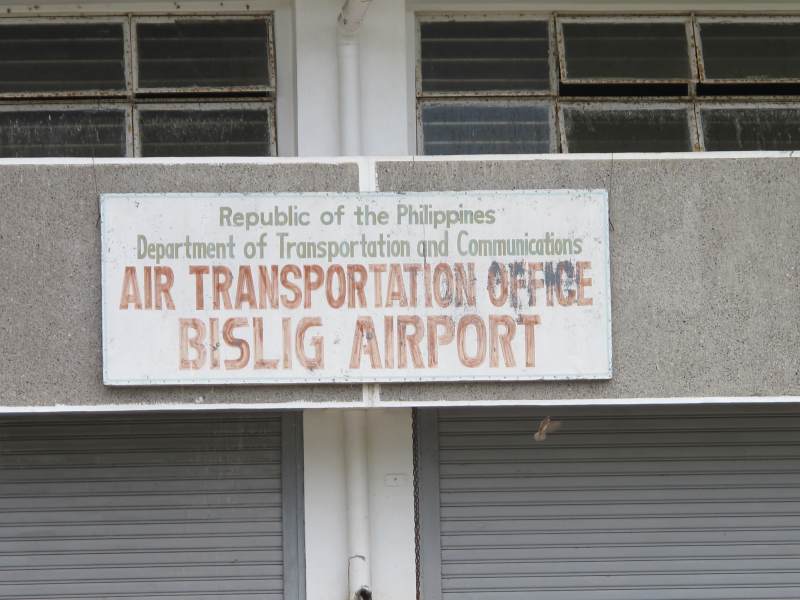 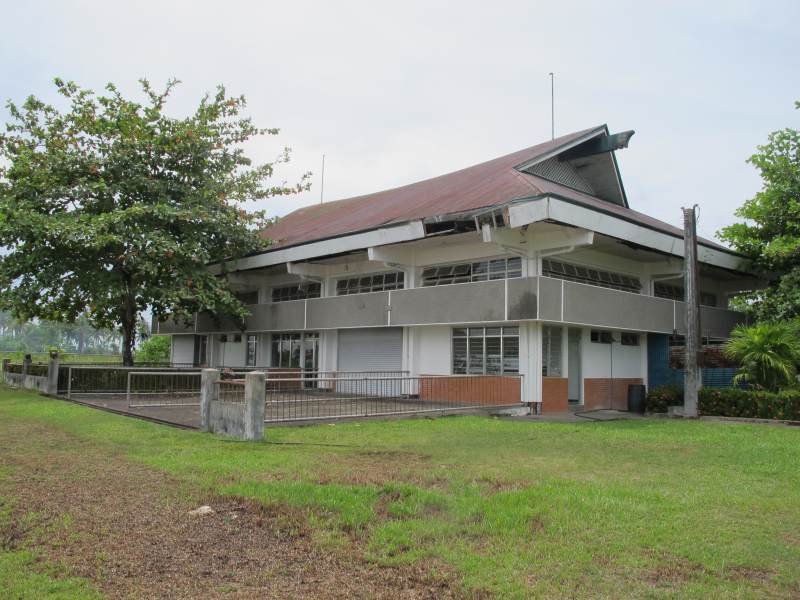 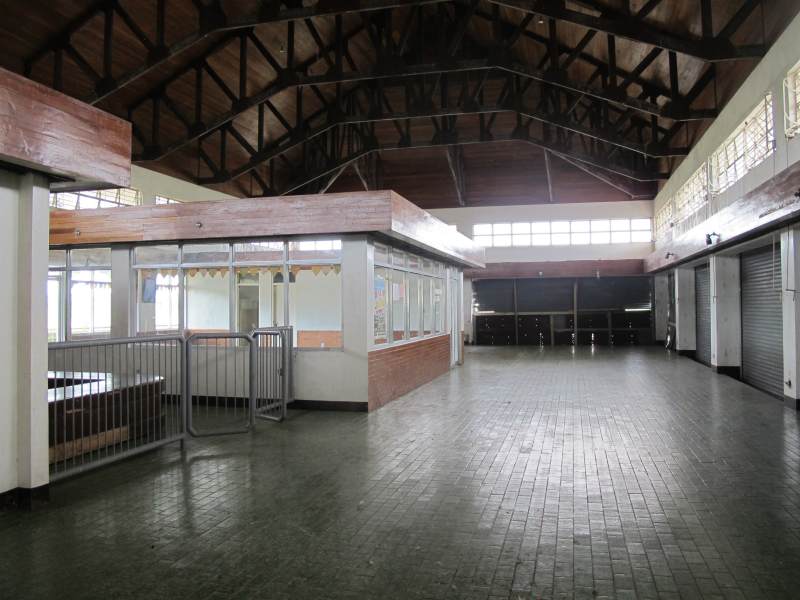 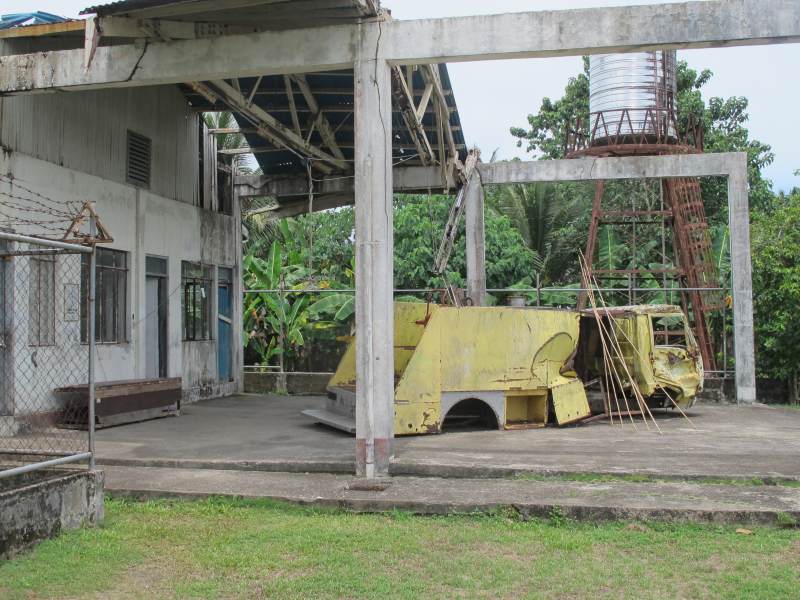 Fire-side. Hopefully it will never burn!

These waterfalls are Bislig’s main attraction. According to the tourist office a monthly average of 6000 visitors were 2014 at the waterfalls. This number seems to be something very glossed. But in the Philippines, when you travel from village A to village B, you are already considered to be a tourist. When we visited the waterfalls, I have counted about 30 visitors. 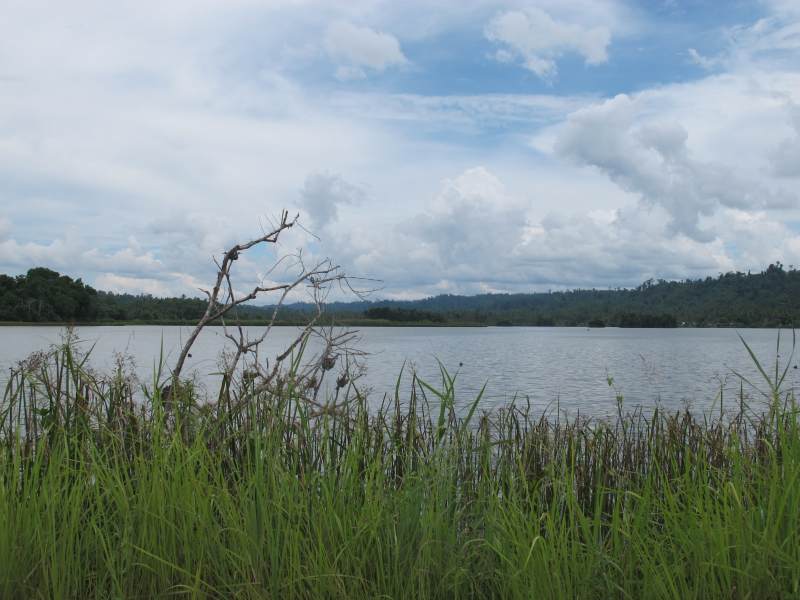 The road is a 19km long gravel road. First you drive through the flat land with rice fields and along a beautiful freshwater reservoir. From about half of the distance the rough road goes up in the hills. 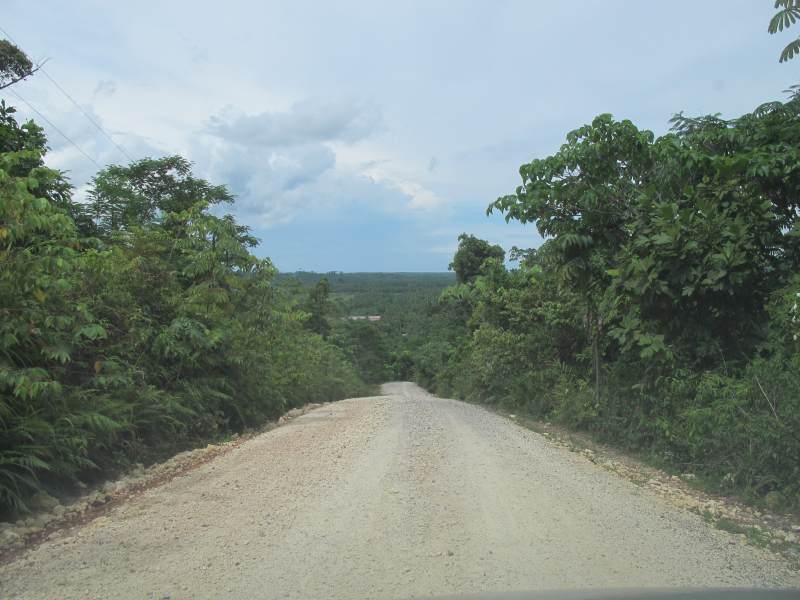 This piece of the rough road is much steeper than it can be seen from the picture. 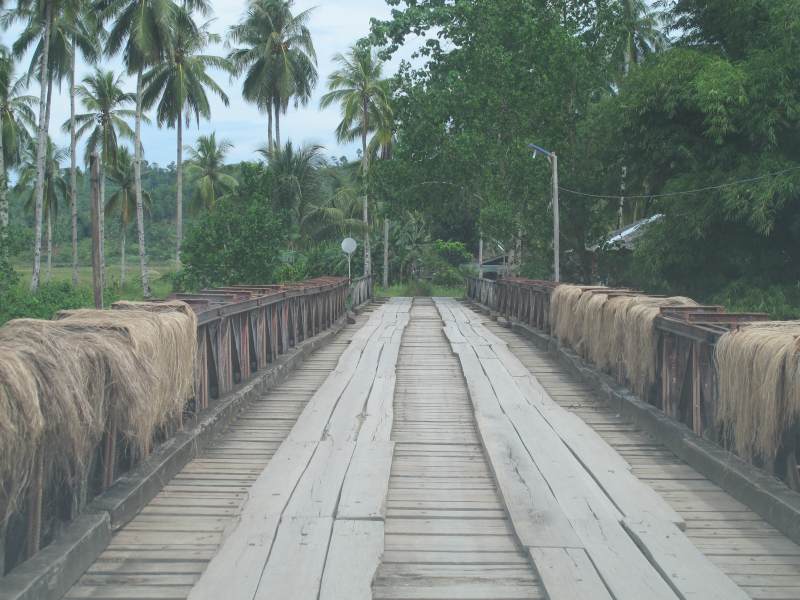 Five of this kind of bridges were to cross. They are more stable than they look, fortunately . 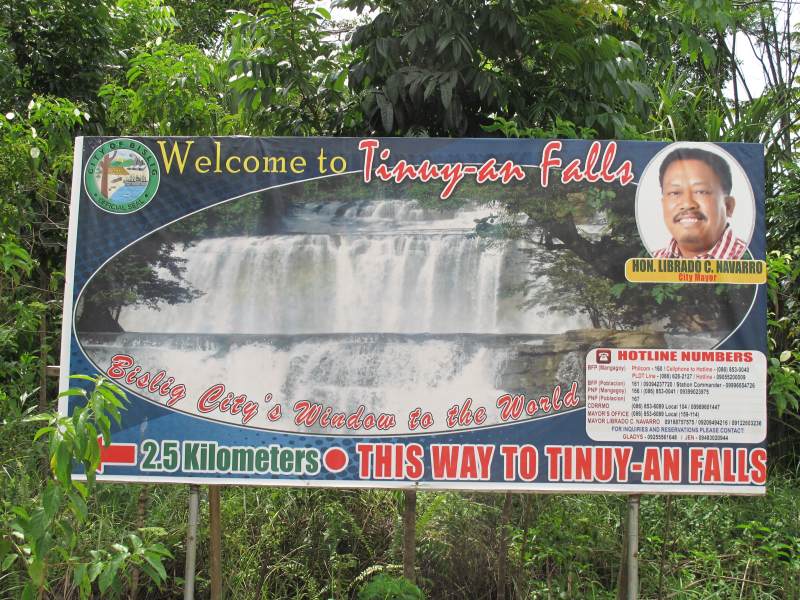 Even in the bush very large signs were erected. The local prince was not allowed to be missing on the poster. 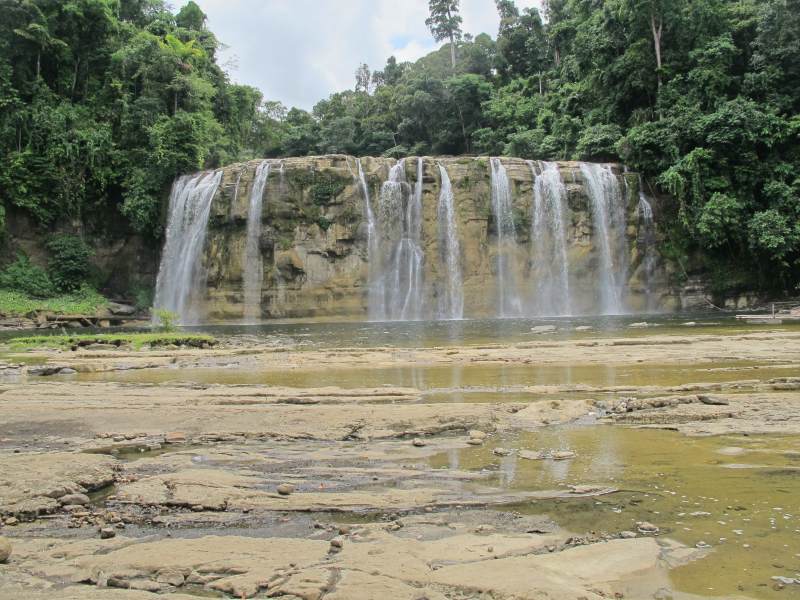 Unfortunately, the waterfall, despite nightly thunderstorms, was not exactly blessed with plenty of water. Seen from the side, it looked a bit better. 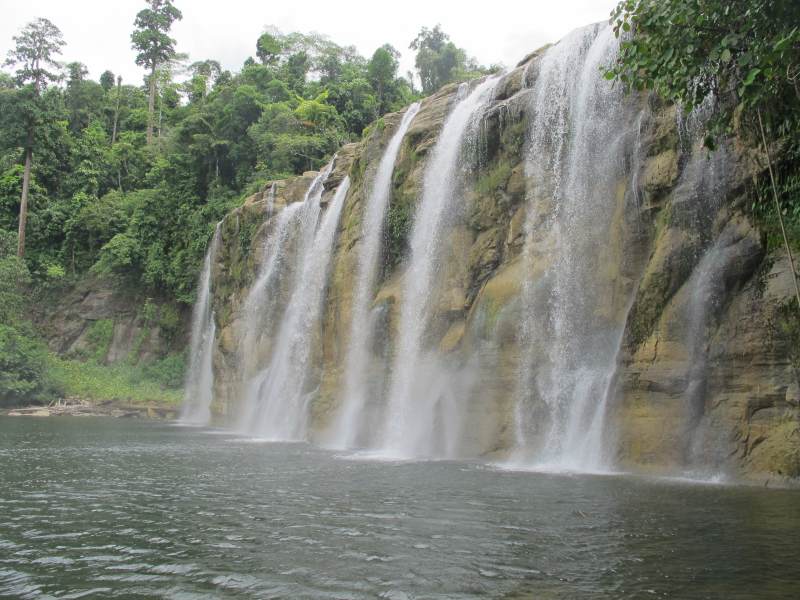 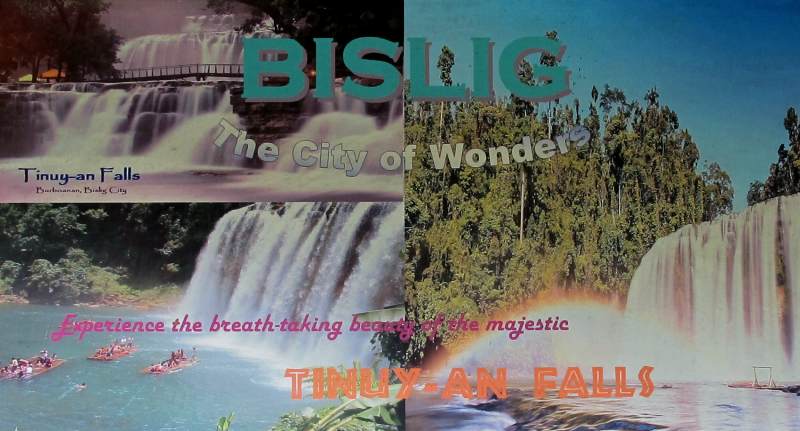 On the billboards, they look a bit different. Once again, we were in the wrong time of year at the right place – or vice versa. 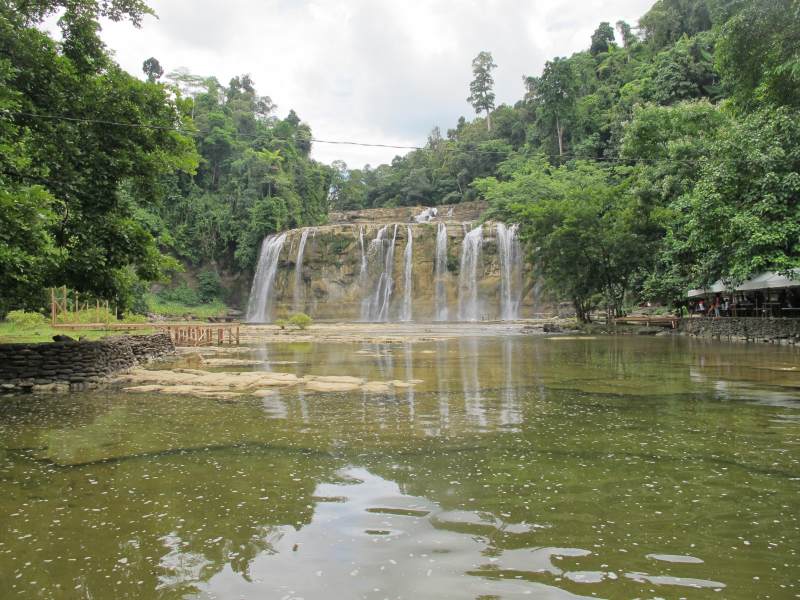 Actually, I would have liked to have go up to the top step of the falls. But the trail was blocked. A guard, told me that I could only go up with a guide. For this 80-meter short path I would have had to pay Pisos 500 only. They are crazy, these Pinoys.
Since it was early afternoon, our stomachs began to growl. The “restaurant” at the waterfall was to “BYO”. But at the entrance, we found the usual eateries and snack joints. 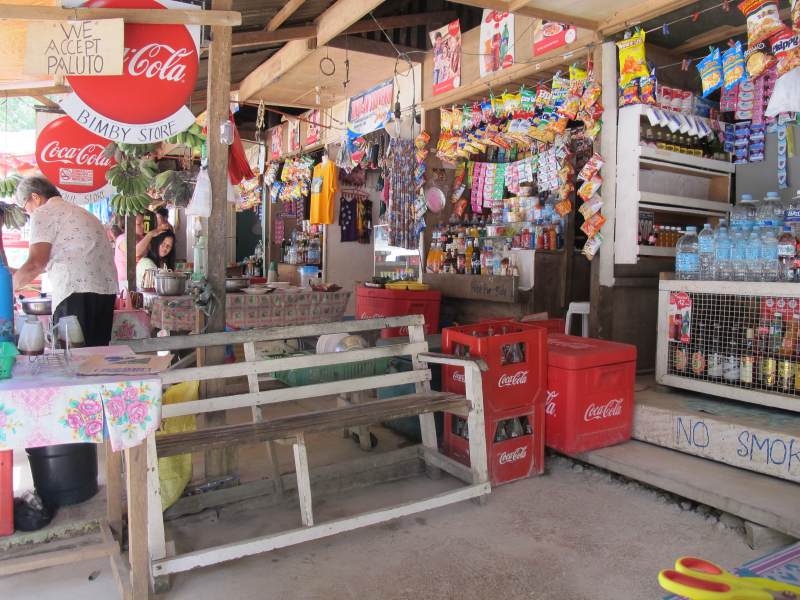 The food seemed not to be very fresh. After inspection of 3 pots I decided for instant noodles in cardboard cup. Good decision!. My navigator had a terrible diarrhea all evening.
But these were not just snack booths but also beauty parlors. An excerpt from the picture above … 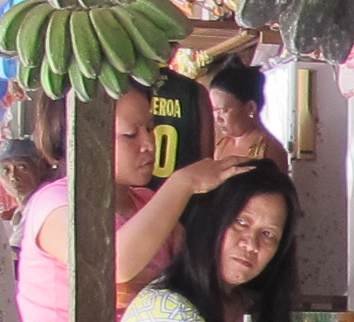 Gray hair or fleas? I do not wanna know …
And here is the anatomy of a 10 Seater HabalHabal 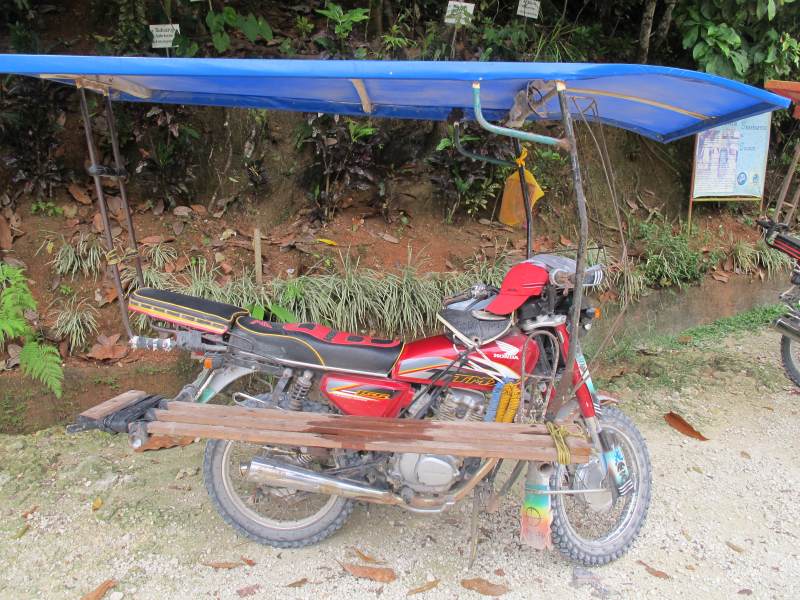 If you do not have a vehicle, this adventurous constructions are the only means of transport to the waterfall. Although we had seen minibuses, they came  from Butuan or Surigao City.
The evening is quickly told. American meat/vegetable cake, here known as Pizza. And then off to bed.
Summary of the 7th day:
Landscape: Very hilly to flat, first along the sea shore  at the start, then inland to Mangagoy
Interesting: landscape, Tinuy-an Falls
Street: Good Condition, rough road to the Tinuy-on falls, no traffic!
Distance: 64 km. Excursion to Tinuy-an Falls 2 x 19 km
Driving time: 1 hour + 1 hour
Tomorrow it goes back to the north.
[GARD]