Pupuce – the story of a girl who is looking ahead – Alaska

Pupuce had been there! The Swiss newspaper “24 heures” launched a series of 7 expedition to discover the effects of Global Warming on-site.

CAUTION: This will be a “Pupuce” week. My youngest daughter “called Pupuce by those who love her” had joined an expedition to the countries of permafrost. Today the sponsoring newspaper published the first article of Pupuce’s adventures in the north of Alaska.

Global warming is the term used to describe a gradual increase in the average temperature of the Earth’s atmosphere and its oceans, a change that is believed to be permanently changing the Earth’s climate. There is great debate among many people, and sometimes in the news, on whether global warming is real- But climate scientists looking at the data and facts agree the planet is warming. While many view the effects of global warming to be more substantial and more rapidly occurring than others do, the scientific consensus on climatic changes related to global warming is that the average temperature of the Earth has risen between 0.4 and 0.8 °C over the past 100 years. The increased volumes of carbon dioxide and other greenhouse gases released by the burning of fossil fuels, land clearing, agriculture, and other human activities, are believed to be the primary sources of the global warming that has occurred over the past 50 years.

Never let a father write about his daughters! I’ve 3 of them and I love them so much. And now being adults, I am so proud of them – they are making history. As midwife, helping future moms and babies – that’s Diane known as “Pfüdi”. As a mom taking care of my first two grand children. Florence called “Flo” or “Flow” has a tough job with kids, wine yards and fightingcows.  And then there is the youngest, Aude, called “Pupuce.
Pupuce studied geography at the University of Lausanne (UNIL). At this moment I do not know if she already has her Master degree or if she just has to unfreeze from Alaska. At the end of this week we should know.
Let’s follow Pupuce and let’s hope she won’t freeze … The following content is courtesy of “24 heures” and has been translated using Google’s translation service. All pictures are copyrighted by “24 heures“. 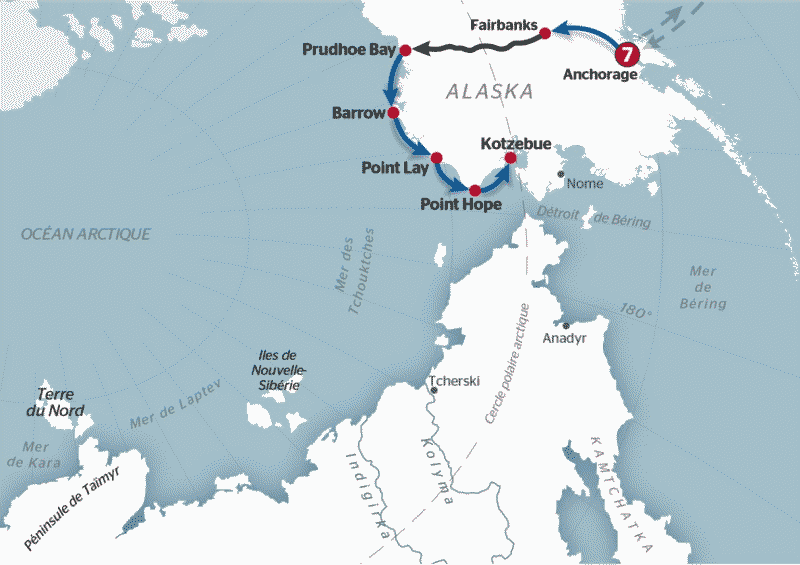 A land bridge existed between eastern Siberia and North America. Once upon a time Beringia at the time of the last ice age. This country of woolly mammoth rejected the Arctic Ocean north of its current limit and included in the South, the Aleutian Islands. It was only in 1728 that the Danish navigator Vitus Bering sailed on behalf of Russia, in the strait that bears his name. The fur trade was in full swing.

But back to this land crossing. He allowed Asian populations is to storm the Americas. “Archaeological sites in the Fairbanks area attest to human presence 14,000 years ago. This is the first obvious sign of populations from the north, “said Joshua Reuthers University of Alaska.

A common heritage with the Russians

People say Eskimo were the last to venture into new lands. The relationship between the Iñupiat northern Alaska and those remained in Chukotka, “cradle of civilization Inuit” according to the ethno-historian Jean Malaurie, is obvious. The Beringia Days, initiated in 1997 and are held sometimes on one side of the Strait then the other, trying to manage the common heritage between the United States and Russia. Russians, it must be remembered, that have given the Americans the lands of Alaska present in 1867 to the tune of seven million.

Hi Alaska!
After a stopover in Anchorage, we landed in Fairbanks, the second city of the state. A stuffed moose welcomes us to the airport. A giant. These animals can weigh up to 700 kilos. Fairbanks is a pretty wooded town, which resembles in fact a huge clearing in the middle of an endless forest area. We go to the Beautiful Log Cabin, we rented a resident. Called “cabin” is the local cottage. It is located in an outdoor area, just in the woods. 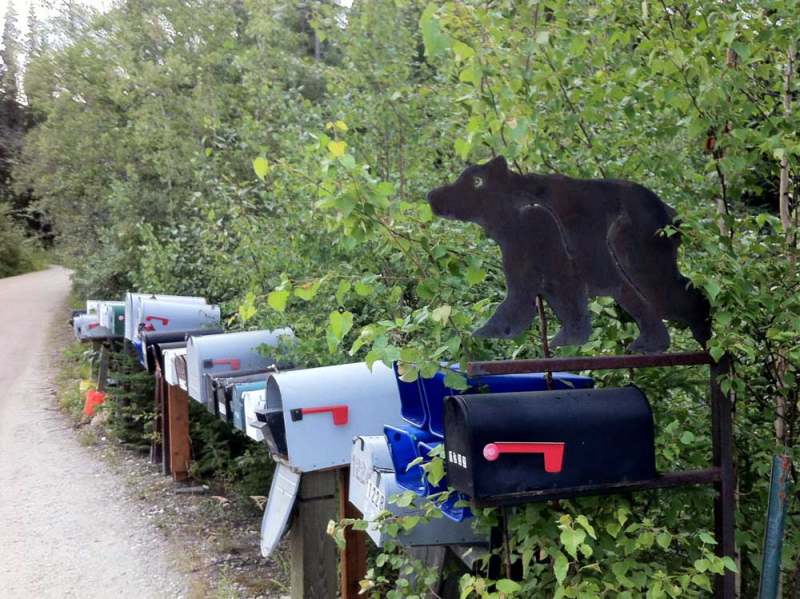 The next day, two of us meeting with scientists of the University of Fairbanks. Two others are going to visit the Quartz Lake, 130 kilometres south. Here, the car is king, few cyclists and even fewer pedestrians. An electrical outlet that exceeds the cover intrigues us. We are told that in the winter the plant can power a small heater that prevents the engine from freezing completely. The Quartz Lake offers magnificent views: it is one of the places where residents come to fish for salmon in the summer. Each resident is entitled to an annual quota. Last year a family of four could grant 55 fish. Enough to fill the freezer. We cross the lake by boat and meet Joshua Reuther, an archaeologist who is researching the banks. 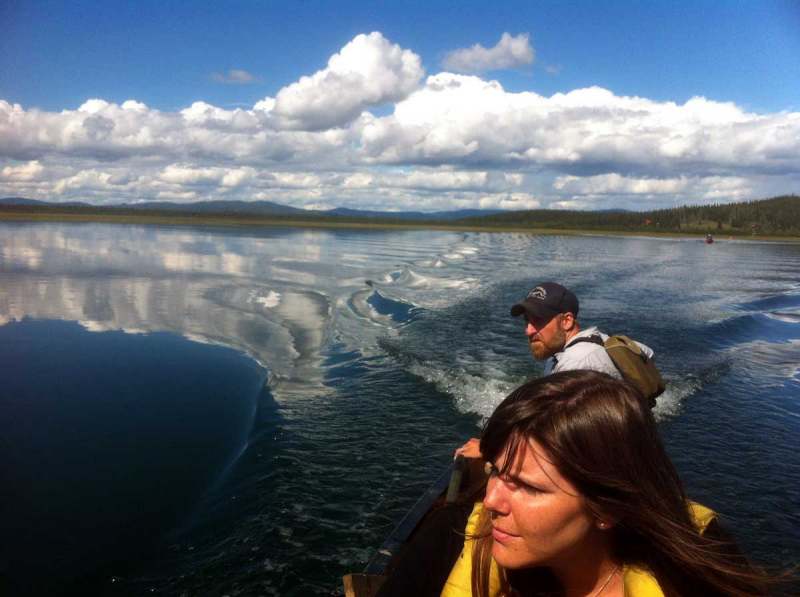 Tomorrow, we attack the Dalton Highway, the road that leads to the north and we will go up to the Arctic Sea. We will buy some provisions that allow us to picnic between steps and soften the lives of two vegetarians in the group, strained the country’s burger! Before leaving, we’ll rent the truck in an agency Go North. The owner is like a trained bear on its hind legs and is expressed by onomatopoeia. Precisely, it offers us a spray against bears. In case of sudden attack grizzly, he said, must spray on the head, at a maximum distance of ten meters. This purchase will probably be useless, we sense are underway, since we have not planned long hike, however we sacrifice folklore. The pickup, a Ford Super Duty Truck, is nearly 7 meters. The insurance covers everything except the back stairs. Certainly, insurers have business sense. 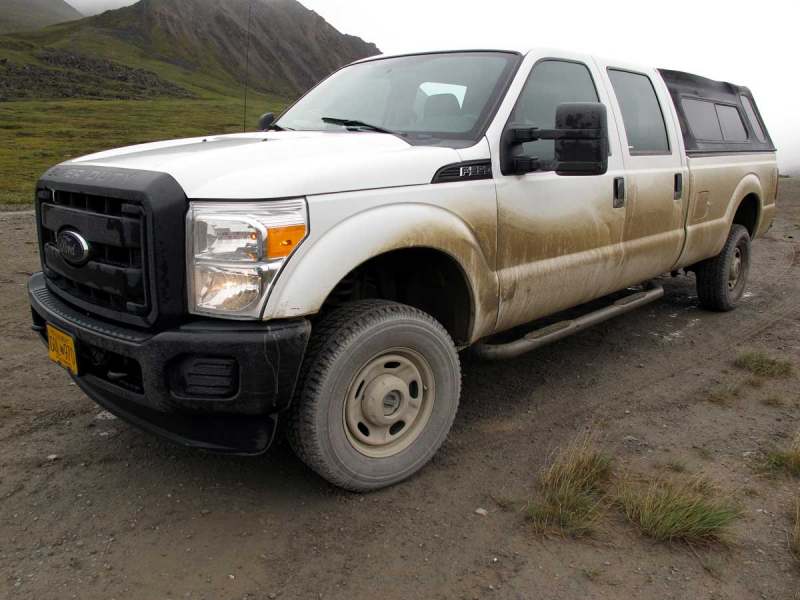 We take gasoline in the first coming station. Terry, the saleswoman asks us where we come from. “Switzerland? Oh! I’ve seen your president on the TV “… Obviously she knows Johann Schneider-Ammann. She admits to having a good laugh, but says that, all things considered, it is not so funny to have such a president. We let it speak. Departure for the Dalton Highway! The first hundred kilometres of the road should be paved. Following is gravel and packed earth. The first kilometres we still are picking the radio. Should there be a soundtrack to this trip on Dalton, this might be the song of Dave Dudley, “Six Day on the Road”. Something cowboy well with what accent should and mud Marlboro. All the more reason to ask what was the history of this corner of the earth.
Tchô ma Pupuce, à demain.
[GARD]