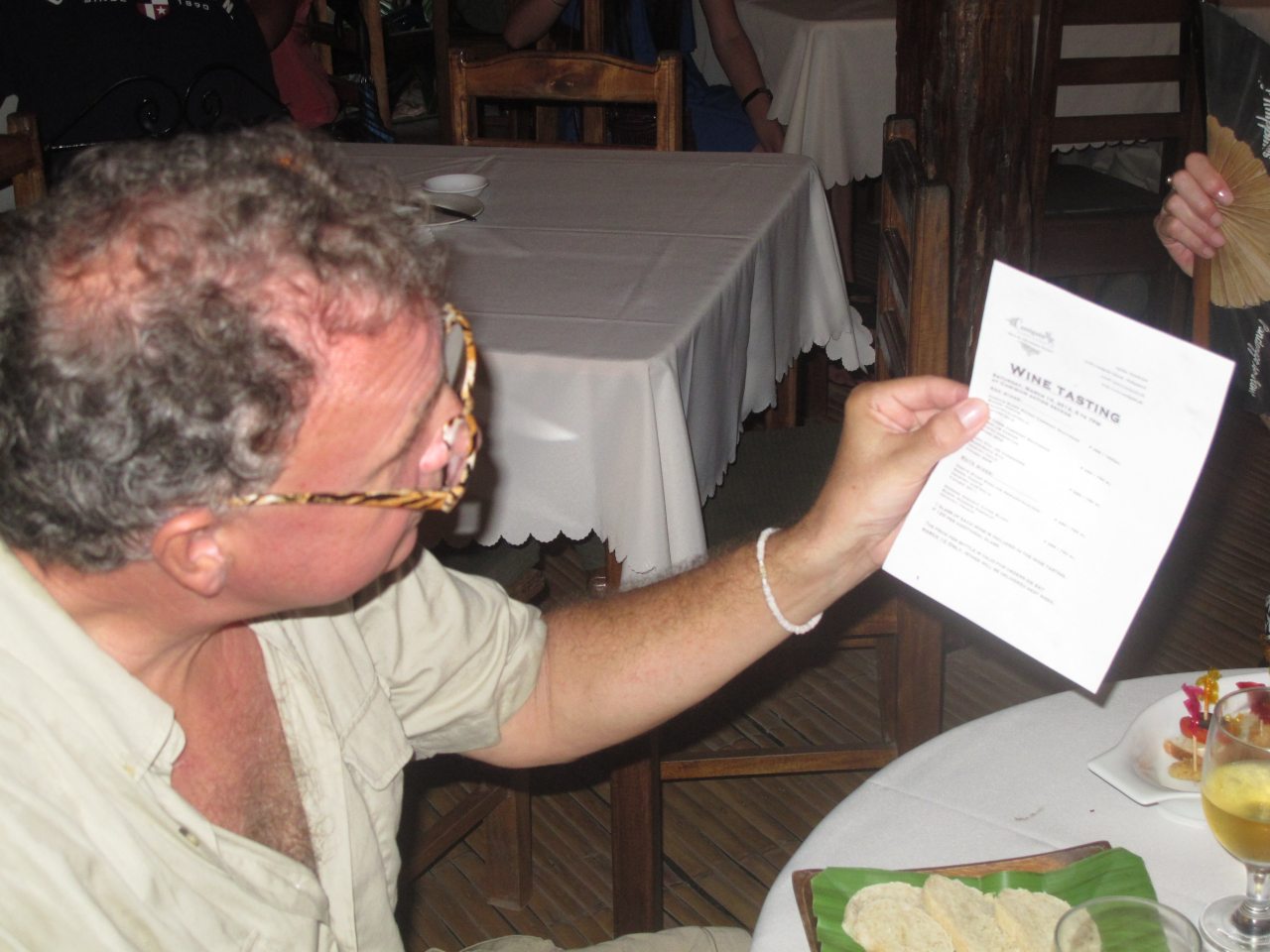 Yesterday evening we were invited exactly to such a Wine Tasting event with all of   components  mentioned  above. The restaurant of the Camiguin Action Geckos was crammed full with expatriates of nations all around the earth. It’s been hot, very hot and no breeze blew in from the sea. 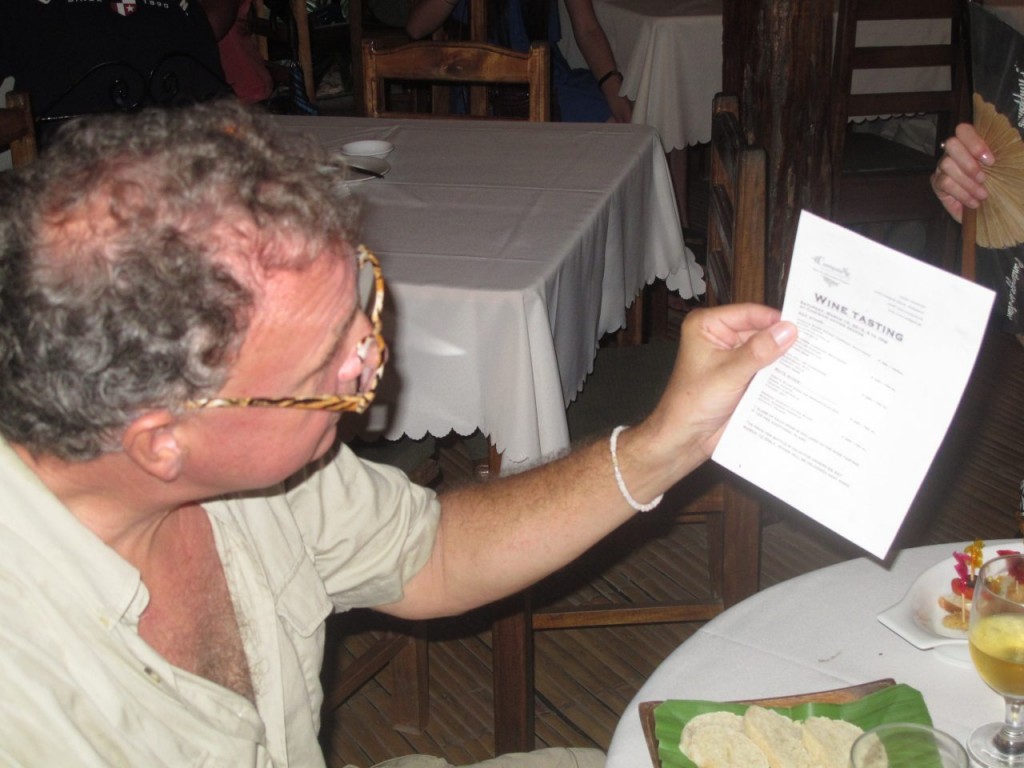 The  Shiraz-Cabernet Sauvignon had the right temperature, but was to heavy to start with. But why not? We hoped that it would come better after this industrially produced Aussie. 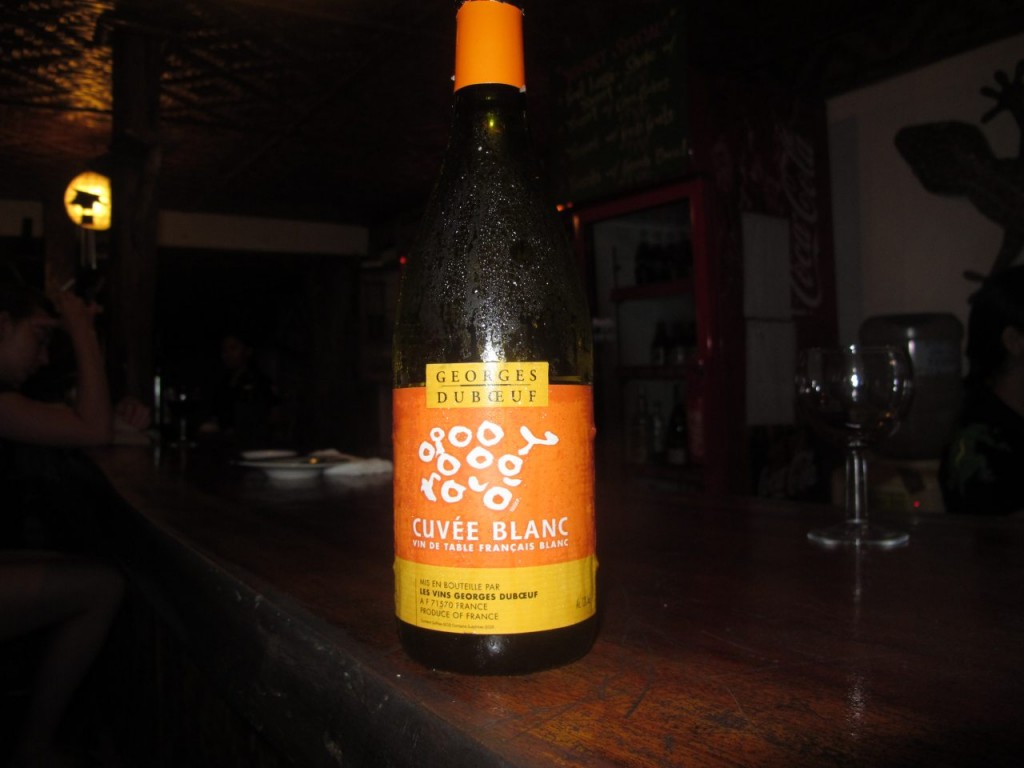 Bacchus got angry! How can one offer such a wine during a wine tasting event? A common white from Saône-et-Loire you can buy at any Leclerc for 0.78 Euros. The 1 dl glass was sold here for 120 Pesos.

Georges Duboeuf, the inventor of the annual Beaujolais nouveau ceremony, has many better bottles in his caves. Why did our connoisseur select this kitchen-wine?

Fortunately the kitchen and the staff of the Camiguin Action Geckos did their best and offered permanently delicious “amuses gueule”.

Then followed the  Santa Rita 120 Carmenère. What a pleasure!
This old cépage had disappeared from European vineyards in the mid of the 19th century.
This wine had been the absolute discovery of yesterday evening.
Unfortunately it had been served too warm. 3 to 4 degrees less would have been fine.

The following  Hardis Stamp, Riesling-Gewürztraminer, was a nice sweet and fruitful white wine. I would have served this wine as the last one!

The last bottle to discover was a Los Cardos, Cabernet Sauvignon. A heavy and fruity wine. For me, it was a bit too acid, but this might have been amplified by the delicious snacks and the preceding  sweet  Gewürztraminer.

Overall appreciation: One real discovery. Two heavy reds. One nice Gewürztraminer and one white, that should not have been here.

It has been a funny come-together with friends in a very friendly atmosphere.
We made our jokes about our British connoisseur, but he hadn’t been that bad at all.