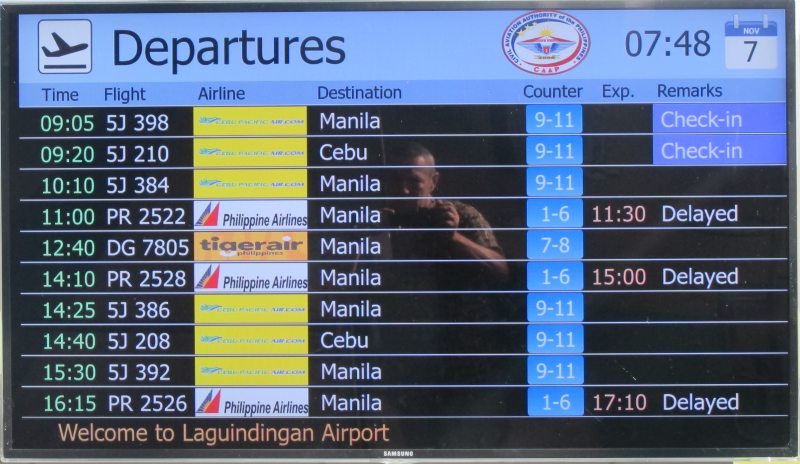 Bicol Special is a bit delayed. Internet in Bicol is worse than in Camiguin. I’d like to have my old 19.2K modem here. But before we report from the hearth of Bicol, we inform you about the rest of our journey.

Just this morning, we got an information from our friends in Camiguin that Oceanjet has again suspended their service from/to Camiguin (UFN). I think we’ll have a short discussion with our governor when we’ll be back. If Oceanjet continues playing such silly games, the only solution will be an ultimatum: You sail now or you won’t sail anymore to Camiguin! This company makes me sick. They bailed out the famous Paras Sea-Cat. After having won the competition with ultra-low fares, they increased the rates by 200% and last Thursday we were at PHP 1,000 per pax to CdO. What a shame!

Didn’t I want to tell you about our journey and about Bicol?

At 07:30 a.m. we had checked in at Laguindingan airport. The ghost in the title image is me, the delays are not real, they are worse. Check-in had been smooth. Luggage was checked through to Naga.  So we hadn’t to catch the bags and bring it upstairs in NAIA-3.
We went upstairs with a really running escalator. And there we first found that funny thing called “Terminal Fee Counter”. 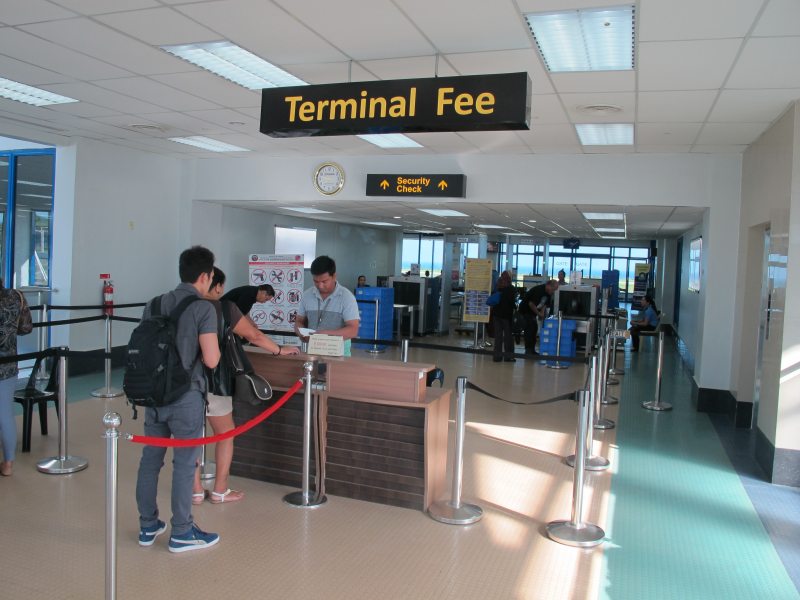 The thing you do not see is the Philippines employment program. The guy at the counter sells the Terminal Fee Ticket. After having done this demanding job he turns to his right and sits at the desk of the Terminal Fee Check Counter. There he tears off half of the paper he just sold to you.

But the most interesting thing comes just after: the “Security Check”. Exceptionally the X-ray machine worked and the metal detector beeped. That’s not normal. Usually at least one of the two machines is out of service.

And of course the officer confiscated my lighter. Even if one standard lighter is allowed by TSA, in Camiguin and Cagayan de Oro they are confiscated systematically. Nobody knows why, but there are some hints: 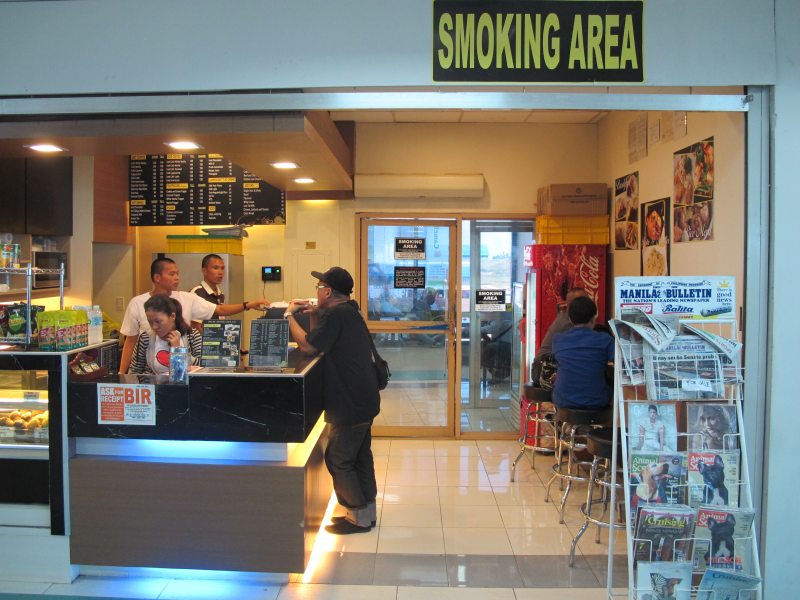 I ordered a double espresso in one cup, a capuchino and a sandwich at the bar above. Double espresso in one cup seemed very complicatedly. “Sir, you will have to pay two simple espresso”… Of course, walang problema. But the poor guy needed about 10 minutes to do so, meanwhile the sandwich for MyButch had been roasted almost black. I paid, but they forgot the capuchino. OMG. I needed a cigarette.

In the smokers room everybody had his/her own lighter. WTF, how did they bring them in? Did they all know the trick with the empty lighter on top in the luggage?

I had my time to think. They just announced that our flight would be delayed by 30 minutes (only).

Evrybody traveling knows the 1-18 / 19-32 boarding schema of Cebu Pacific. Front entrance for the first 18 rows and rear entrance for the rest of the passengers. In the most recent airport in the Philippines – Languindingan International Airport- it looks as this:

While taxying to the runway I could verify that the ILS antennas, PAPI lights and other equipment were now installed. We are now waiting for the CAAP certification. But this is another story that will be told later.

During our flight to Manila we enjoyed the sightseeing tours above Luzon. We could enjoy Taal volcano and Laguna bay at least 3 times before landing in MNL

Transfer in Manila is a real adventure. More information is here: Manila Airport Transfer.
But transfer within the same termina with the same airline is also a fitness track.  Fortunatey our luggage had been checked through from Cagayan de Oro to Naga City. So we didn’t have to fetch and carry our bags.

There is still no transfer zone, where you can refresh and go straight to the gate of the connecting flight. No, you have to go down to the exit level. But you do fortunately not have to leave the building. Then you go up again, pass by a guard, pass by the terminal fee check and do again the security check. This needs about 30 minutes of jogging.

Our flight was initially delayed for about 1 hour. After 30 minutes standing we found a seat. And then we waited. 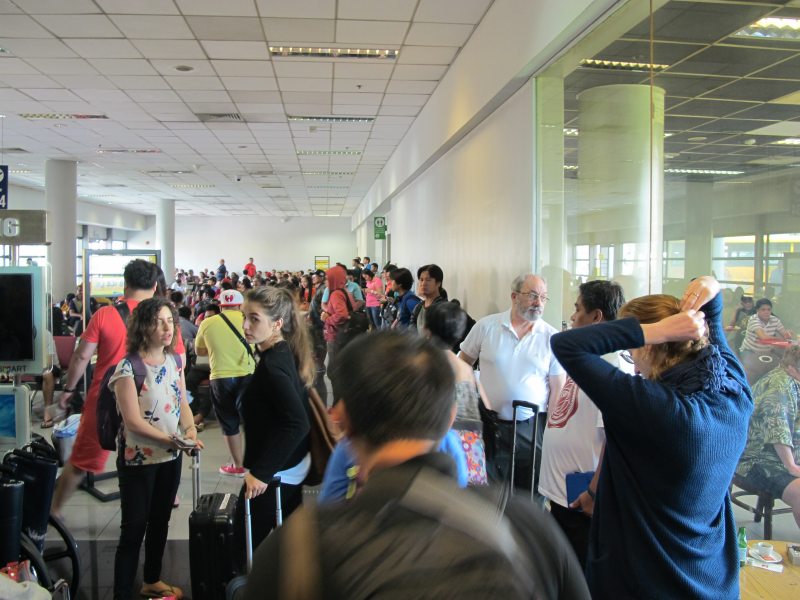 After a somehow bumpy flight because of the afternoon’s thermal turbulence, we arrived at 4 p.m. in WMP – Naga City’s airport.

About 24 hours from Camiguin (Benoni departure) to Naga City arrival. That’s 530 kilometers in the Philippines.
If you know, you are prepared. If you don’t know, you get mad and frustrates.
This is why we write such articles. It’s not a complaint, it’s preparedness, it’s information.

And by the way: I needed almost 4 hours to get this article on-line. Bicol’s network went off-on-off-on-off- o… no maybe…