Thomas Oliver Kellenberger was an ordinary policeman in Switzerland. But not to children working in the garbage dumps in Cagayan de Oro.

Thomas Kellenberger when he still had been a policeman

Kellenberger, 27, quit his job to relocate to the Philippines last March, where he is now working fulltime in the love of his life – a foundation helping scavenger children and out-of-school kids and their families.

Kellenberger founded the Island Kids Philippines Foundation in 2007, after an ordinary tourism trip with a Filipino friend opened his eyes to the poverty in Mindanao.

In an interview with this writer in 2007, Thomas related the life-changing events that would come from that seemingly ordinary vacation trip.

He said he had read or saw on television the poverty in the Philippines, but while in Cagayan de Oro, “on the third day of my stay, something happened to me, something very emotional so that after this, everything would change.”

“We passed by car through a dumpsite, and I was not thinking anymore about white beaches or touristic things. From this time on, I was interested in this poverty.”

A day after, Kellenberger’s group went to Camiguin island where another incident occurred – they encountered Tanya (then 10-years-old), who was diving at the Benoni wharf for coins thrown into the sea by tourists.

Kellenberger had given a sum of money to Tanya to buy bottled water, and when the child took long to return, his friends had assumed she had run off with the money. But Tanya did return with the water and the change, and her honesty had impressed him very much. 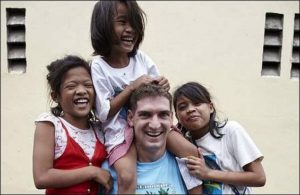 It needs not much to make someone happy

Added Kellenberger: “It came to my mind to build up a foundation. It was strange for me, but I knew exactly what to do, it would have been God’s purpose for me.”

The policeman in Bern, then 24, started his foundation by sending 4 kids working in the garbage dumps to school.

Three years after, the Island Kids Foundation supports more than 70 children and their families. The kids attend day school or day-care centers. The mothers are taught to read and write by volunteers and to add income for their families, to sew handbags made from used fruit juice packs. 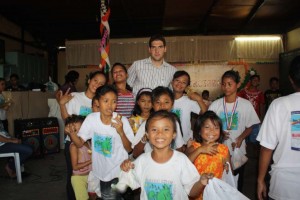 Thomas Kellenberger with some ex-dump-site kids

In addition, the foundation plans to buy 14 hectares of farmland in Bukidnon for Dapit nga Kapuy-an (A Place To Stay), a resettlement project for 90 families who are using the garbage dumpsites to earn a living.

Working the police shift here in Bern and attending to his foundation in the Philippines naturally took a toll on Kellenberger’s health. Sometimes after ending a shift at midnight, he still needed to stay up if he wanted to chat with his “children” in Cagayan, 7 hours ahead in time zone.

“He was successful with his police work, but he was also successful with his Island Kids Philippines work. He could not do the 2 anymore, it got too much and so he had to decide,” said Kellenberger’s father, also named Thomas, a supermarket manager.

His father added, “Of course, we understood that in his heart, he wanted to go to his ‘children’ (beneficiaries in Cagayan de Oro).  For me, it was no problem, just to accept it.”

When Kellenberger leaves for the Philippines, he will leave behind a group of volunteers headed by his mother, Ruth Kellenberger, who is the foundation’s vice-president.

His family and his friends are all proud of him, and support his decision to work fulltime in the Philippines. He meanwhile says he will visit Bern once a year to help stage the periodic benefit events for the foundation and to report personally to the foundation donors and supporters.

), where updates on Kellenber’s work in the Philippines will be posted.