Around our house in Camiguin live several geckos. They love to hide behind the bamboo during the day. In the evening they come out of there hideaways to hunt their prey and much more. 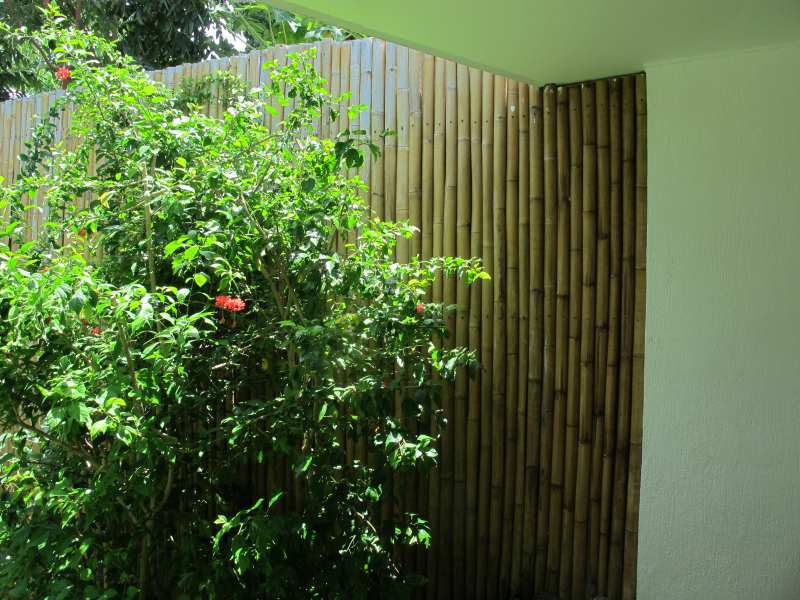 The Camiguin Gecko belongs to the family of Tokay Geckos. The Tokay Gecko is the second largest Gecko species, attaining lengths of about 11–20 inches (28–51 cm) for males, and 7–19 inches (18–48 cm) for females, with weights of only 150–400 grams (5.3–14.1 oz). They are distinctive in appearance, with a bluish or grayish body, sporting spots ranging from light yellow to bright red. The male is more brightly colored than the female. They have large eyes with a vertical slit pupil. Eyes are brown to greenish brown and can be orange or yellow.

Males are very territorial, and will attack other male Tokays as well as other Gecko species, as well as anything else in their territory. They are solitary and only meet during the mating season. Females lay clutches of one or two hard shelled eggs which are guarded until they hatch. Tokay Geckos feed on insects and small vertebrates. Their strong bite is needed to crack the shell of hard cockroaches that live in the rainforests. They are also extremely strong climbers and their foot pads can support their entire weight on a vertical surface for a long amount of time without any effort. Compared to other gecko species, the Tokay has a robust build, with a semi-prehensile tail, a large head and muscular jaw. 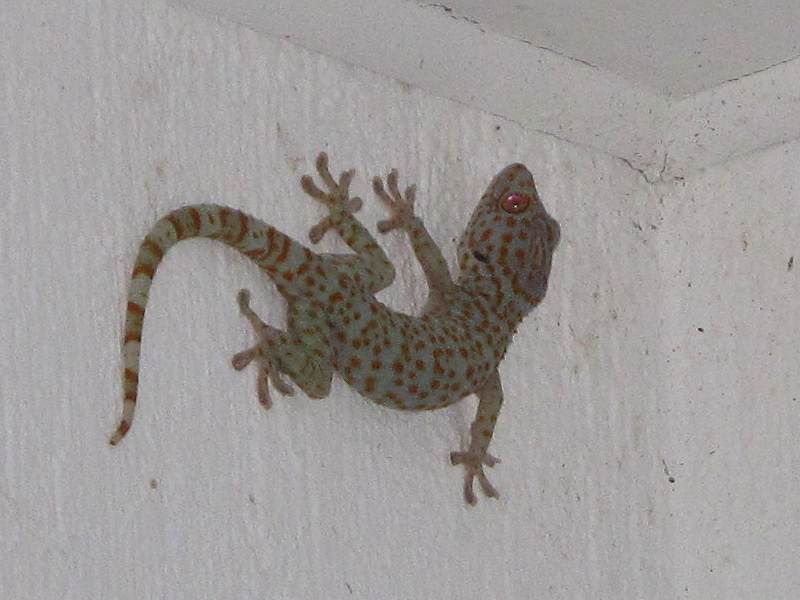 Actually this is also one of our geckos, but it is a female. Why we know? Please see below.

We much like our geckos because they control the population of all the insects and the smaller lizards around our house and especially on our veranda. Earlier this year a young male found his place behind the bamboo cover near the bar. He was a really funny youngster with his stuttering voice. Almost every evening we could hear his vocal training several times.

Here is his famous stuttering voice recorded with my cellphone:

As he grew up, his voice became better and his body much stronger. Here you can hear the guy, trying to attract a female:

Growing up, he had only one natural enemy, the Monitor Lizard. There are many Monitor Lizards living just behind the wall. We sometimes catch one of these guys around our house and bring them back to where they came from. 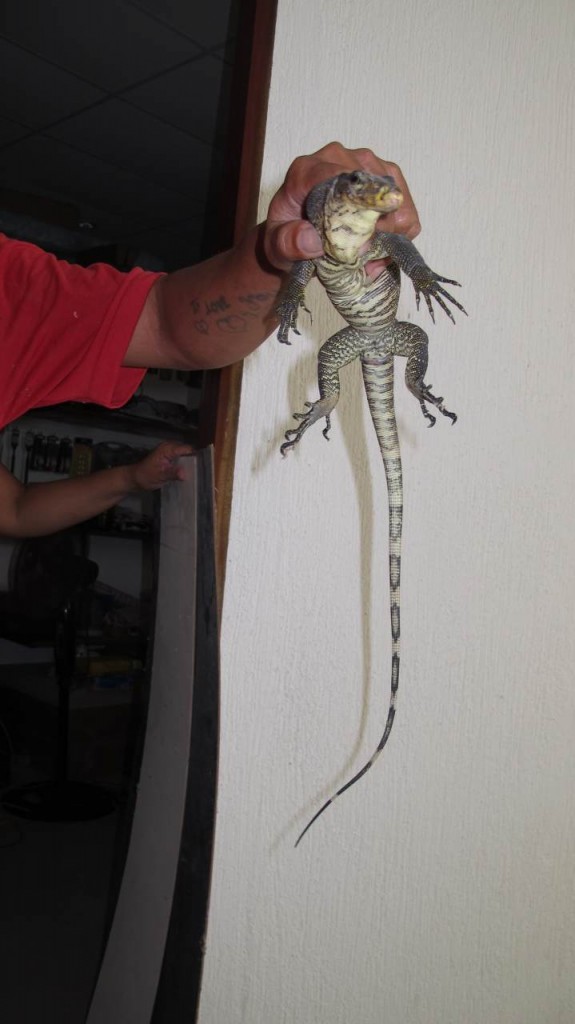 Yesterday evening at dinner time, we observed “our” gecko as usual behind the bar. This spot is about 20 feet away from the bamboo wall. “Our” tuko always starts the nightly hunt in this place. As soon as our dinner is finished, he sneaks around the house. But he was quiet and the movements were different from usual … 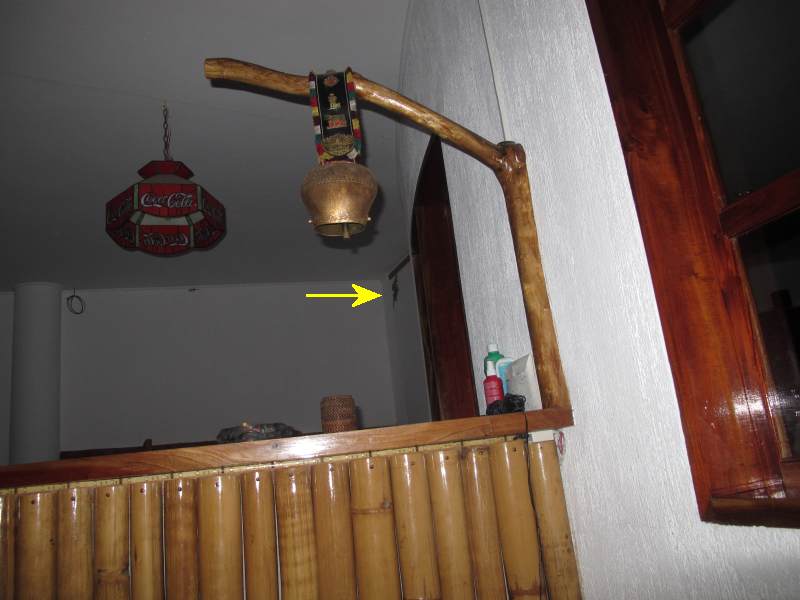 “Our” Gecko had found a girlfriend! 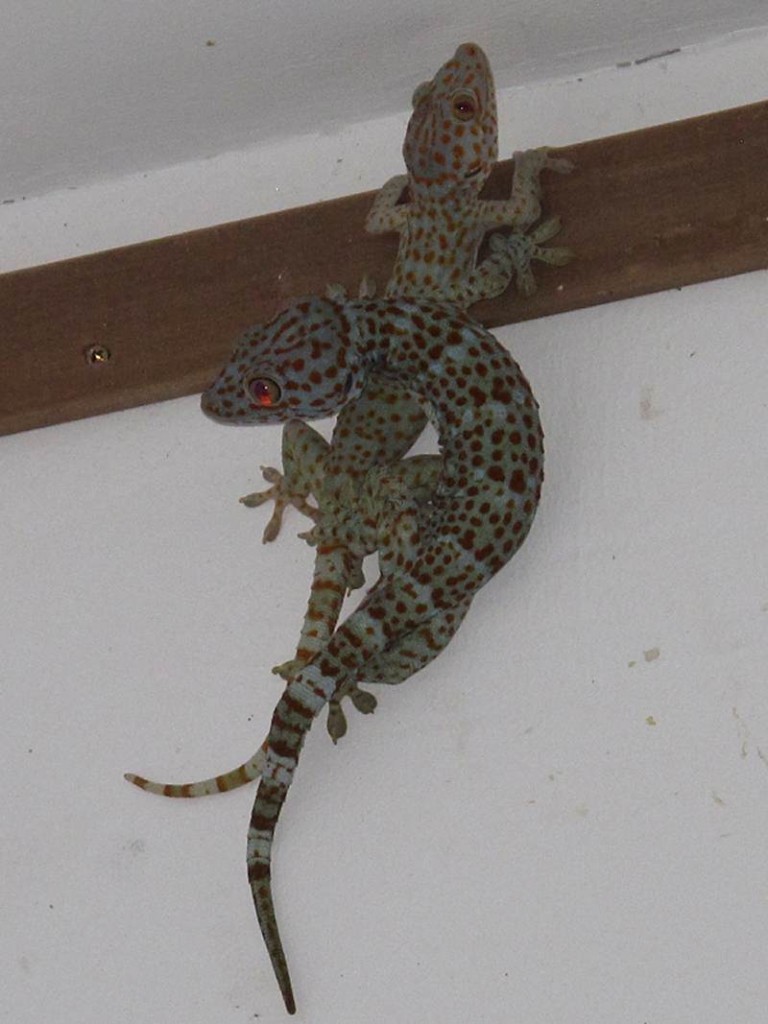 We didn’t want to disturb the two anymore with the flash of our camera. The mating lasted about 10 minutes. Maybe they’ll meet again tonight ♥ ♥ ♥
We do not know where the female will lay the eggs. We observed them inside electrical tubes, the double ceiling of our veranda and behind the bamboo. We also saw that the female stays the whole time near the eggs, until the babies hatch.

It is wonderful to live here in Camiguin with its still well preserved natural environment. And here in Agoho on the beach front we fortunately don not have noisy neighbors. Thanks to the left and the right. We really can live tropical nights with voices one usually hears only in deep forests.