Today was such a crazy day again. I would actually still have liked to go continue on the east coast via Tandag to Surigao City. But then Butch (aka. Navigator) received a text message from Citi hardware in Cagayan de Oro during breakfast. Our oven was repaired and ready for collection. as both of us had missed our homemade bread, we decided to go directly to Butuan. Since the road was mostly in a good state, we drove rather fast.  We already knew the area around Butuan, so we drove further to Balingoan.
But first, the map: 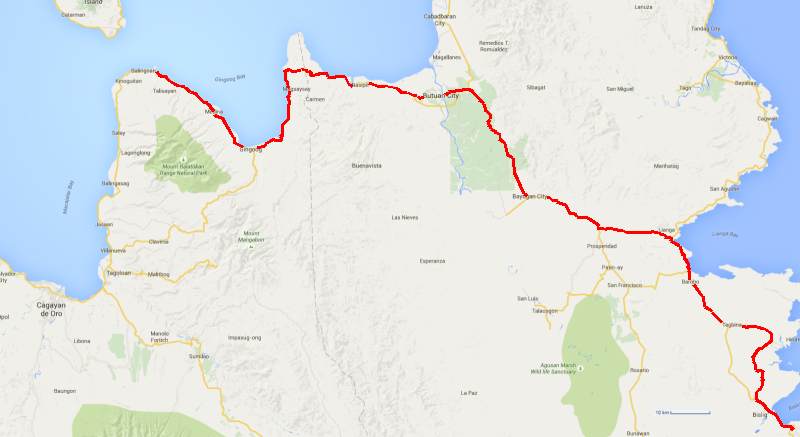 Todays map is not easy to read. Here is a larger version.
After breakfast, spam with rice and Nescafé, I collected a few impressions of the Bislig Bay. 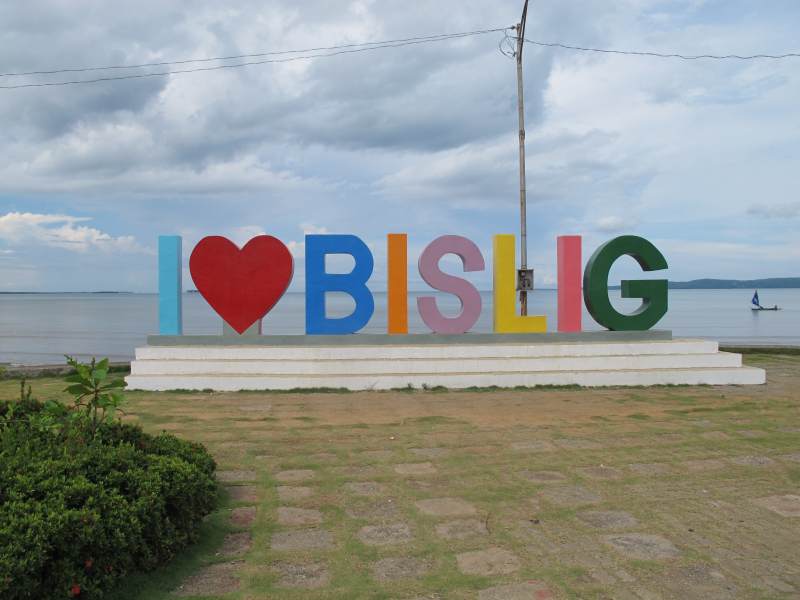 This I ♥ writings we see today almost everywhere. In the Philippines they are very popular, so everybody can shoot a “selfie” and post it on Facebook. 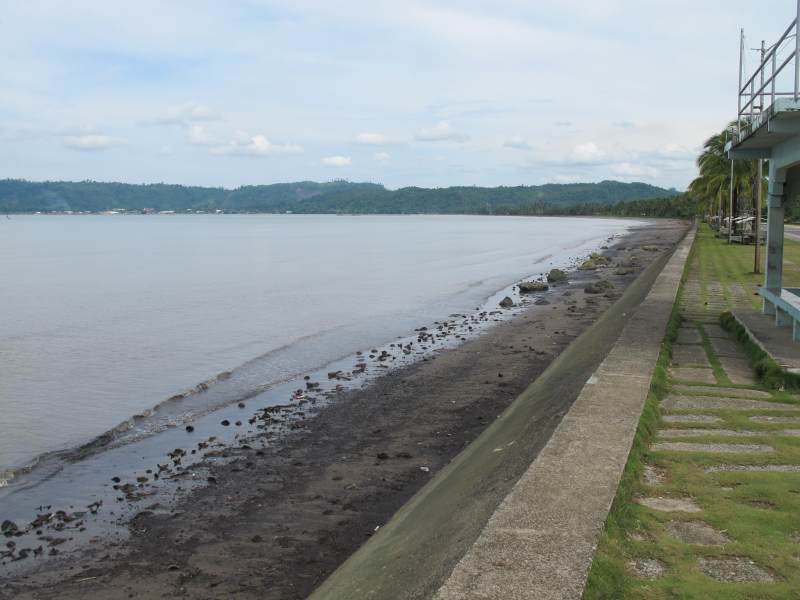 The Baywalk between Bislig and Mangagoy is about 3 km long, too long. As the scene does not change on the whole 3 kilometers, a walk will soon become monotonous. For joggers, it is the perfect track for training. 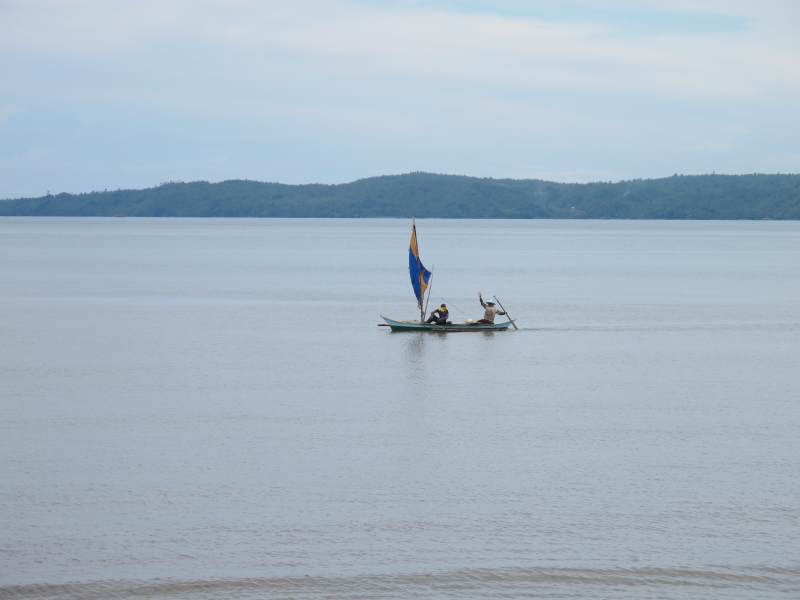 From the sea a fisherman waved kindly. The sail was made from an old tarpaulin. I followed the boat along the shore line.
The 400 m further the fishing village then looked like this. 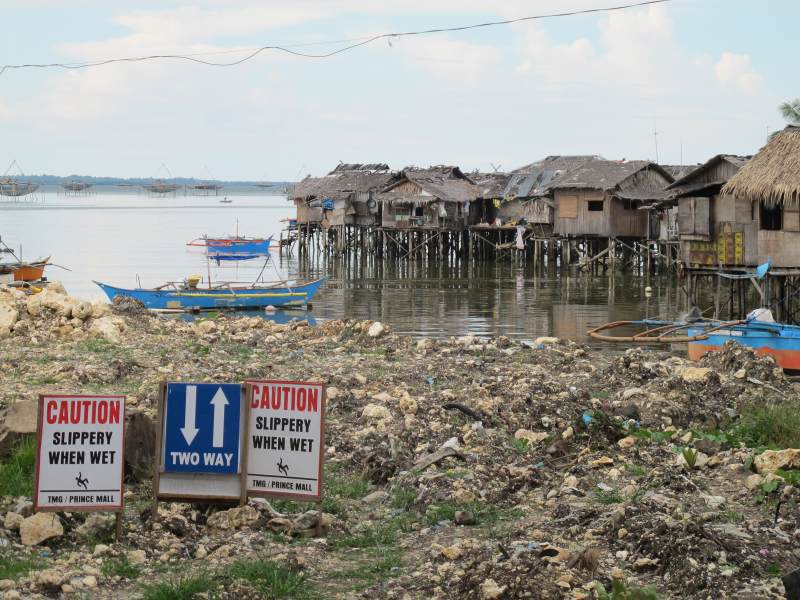 Maybe it looks a little bit better at high tide. 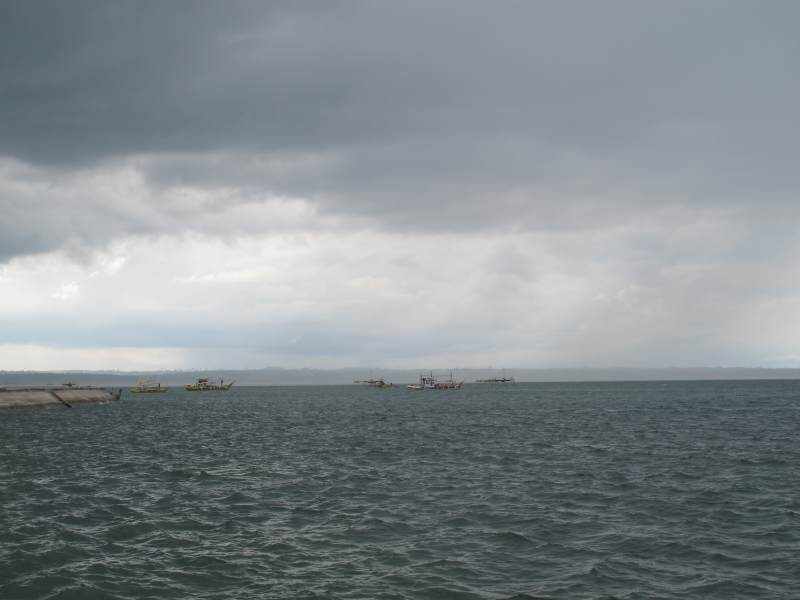 The weather changed very quickly. The upcoming rain brought a certain drama to the scene.
We drove by Tagbina and Baroboto Lianga still partly along the sea. The road was still in good to very good condition and there was hardly any traffic. On the whole route it was raining and we had  no desire to stop.
Shortly after Prosperidadthe coastal highway joined the Pan Philippine Highway. This very important road links Surigao / Butuan with Davao. The traffic increased abruptly. Up to Butuan we counted hundreds of trucks and buses. In the villages,  habal-habals, pedicabs, motorelas and tricycle slowed the traffic down to 10-20 km/h.
Between Bayugan and Butuan, the road is being renewed. We encountered everything from new four-lane highways to the worst pothole tracks. Most annoying were the kilometers of already perforated old concrete layers.
Despite these terrible last 40km we arrived shortly after noon in Butuan City. We know this city quite well. Ever since the airport of Cagayan de Oro was moved to Laguindingan , we often pick up friends and guests at the newly renovated airport of Butuan.  Since we stopped only for lunch, I show here some pictures from other visits to this city. 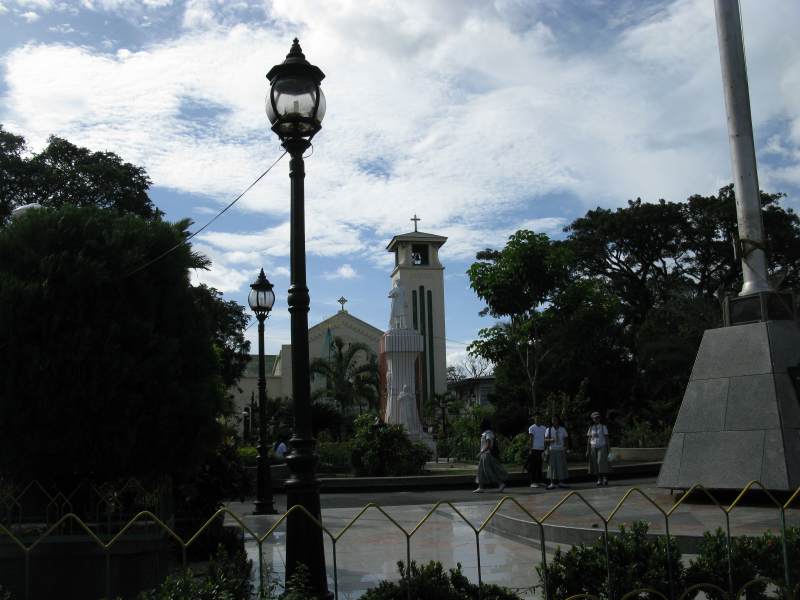 If you want to stay in Butuan, we can recommend the Almont Hotel at Guingona park. 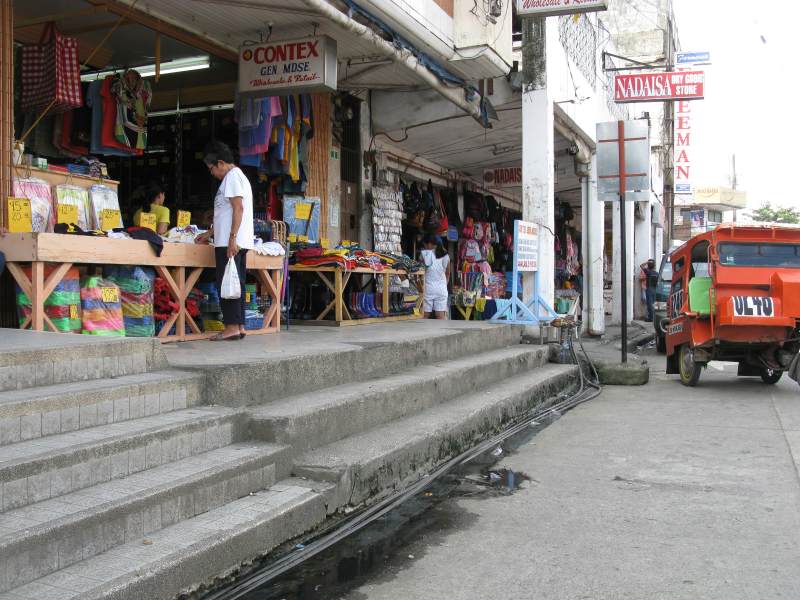 The sidewalks in the center are very high. This construction is necessary because of the Agusan river flooding the city again and again. 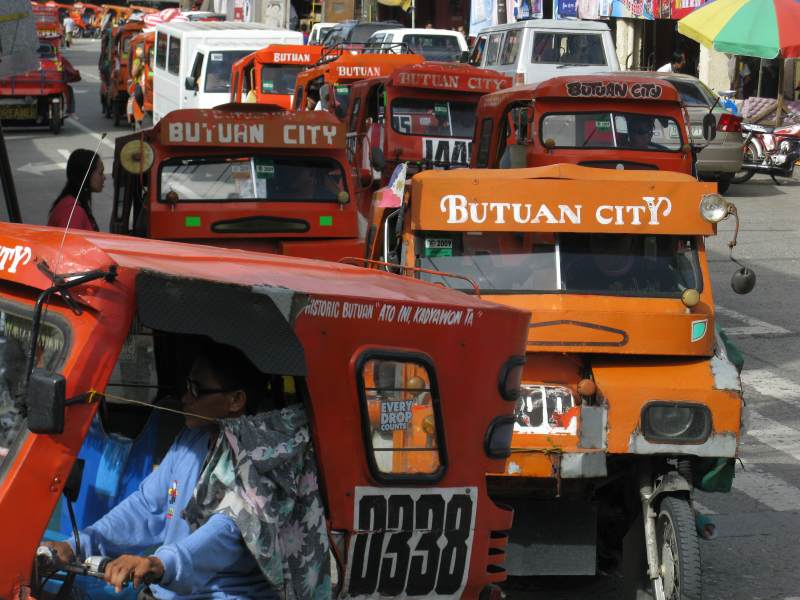 All tricycles are painted orange … 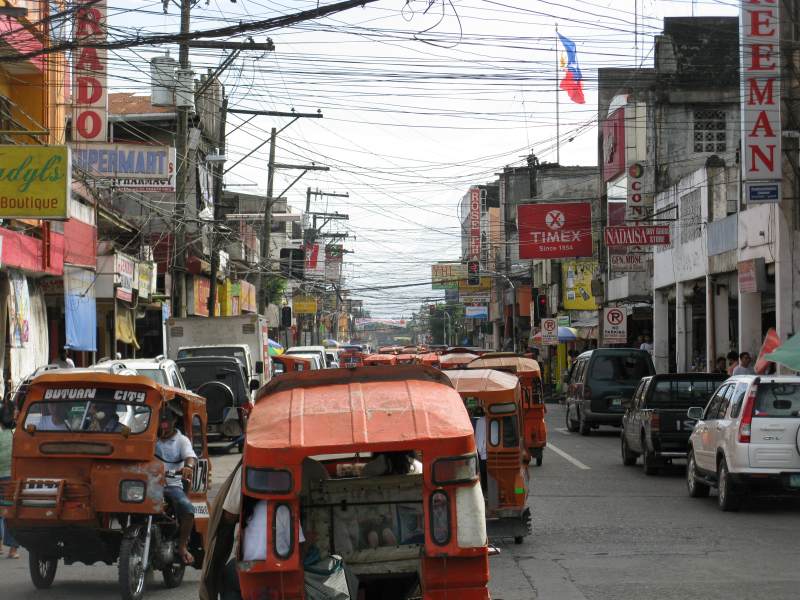 … And clog the streets.

This is not my picture. Source
If weather is fine, a visit to the Philippine National Museum is recommended. On the grounds of the museum the remnants of ships (Balangays) from the 10th century were found. Besides the excavated boats there are also functional replicas to see . It is interesting that the word Barangay (village) is derived from Balangay. In the kingdom of Butuan each village community had had a boat.
Since it was still pretty early in the afternoon and we really had no desire to stay in Butuan, we decided to go to Balingoan to. In Balingoan we know a very nice resort.
Repair work of the road from Butuan to Balngoan is almost finished. The highway is in good condition. About 1 km up in the hills of Magsaysay Peninsula is still rough road. Traffic was lively but fluent. If it does not rain and there is a clear view, a stop is recommended at the top. Below one sees the bay of Gingoog. Out in the sea one sees “Home Sweet Home”, Camiguin and on the horizon are Bohol, Southern Leyte and Surigao to see. 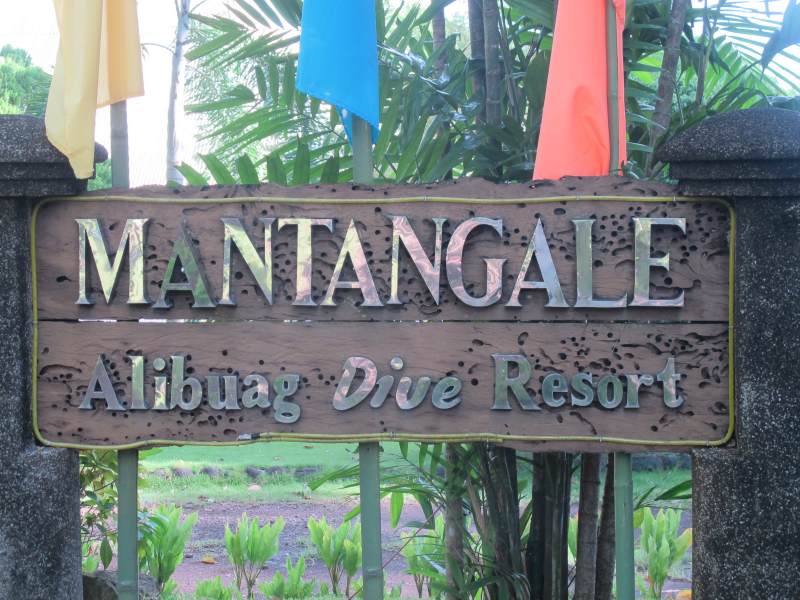 We know and appreciate this resort for many years. The first time we were there in 2009, because in the evening we had missed the last ferry to Camiguin. Today we just wanted relax, enjoy the good food and stroll in the beautiful park. Tomorrow we just would have a quick drive to CdO to fetch our oven.
We were lucky, the owners, Mr. and Mrs. Uy, were in the house. This Chinese couple in his late seventies, had begun to build the resort in Barrio Mantangale Alibuag in 1994. Each time we stayed here, we had a lively chat with the two. They are both still fit and have fun doing gardening and continue improvements of the resort.  Earlier this year, we also had by chance met their son in Cagayan de Oro. He operates a dive shop and a hardware store.
The huge park of the resort is a feast for the eyes. The rather steep coast had been terraced. However all the old trees were preserved. Today you can admire 30 -50 meters high tropical giants. The park was established as a semi-wild tropical forest.
The dive center is well equipped. In addition to 3 boats in best conditions,  I could also see the high quality equipment and the air and Nitrox filling station. Only the best of the best. 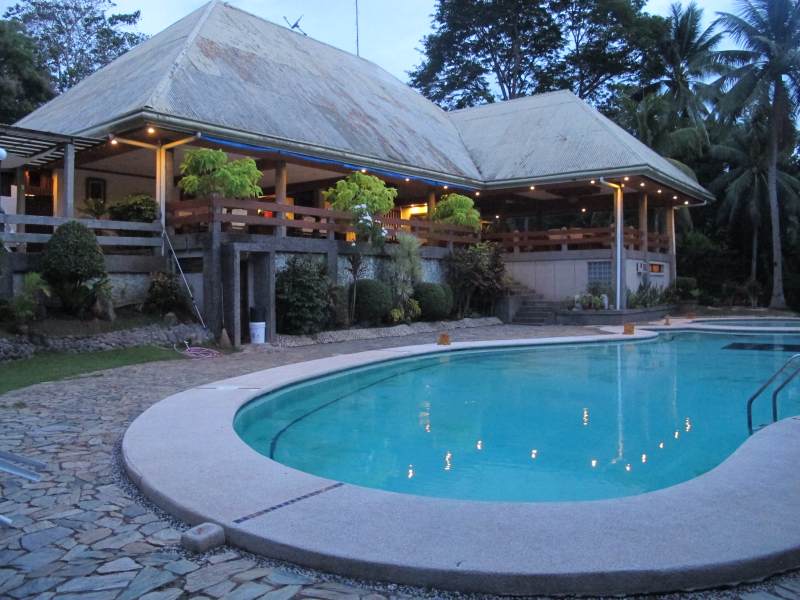 The large swimming pool, which is also used for “confined water” PADI lessons.
In the evening and at night the whole park is discretely illuminated. 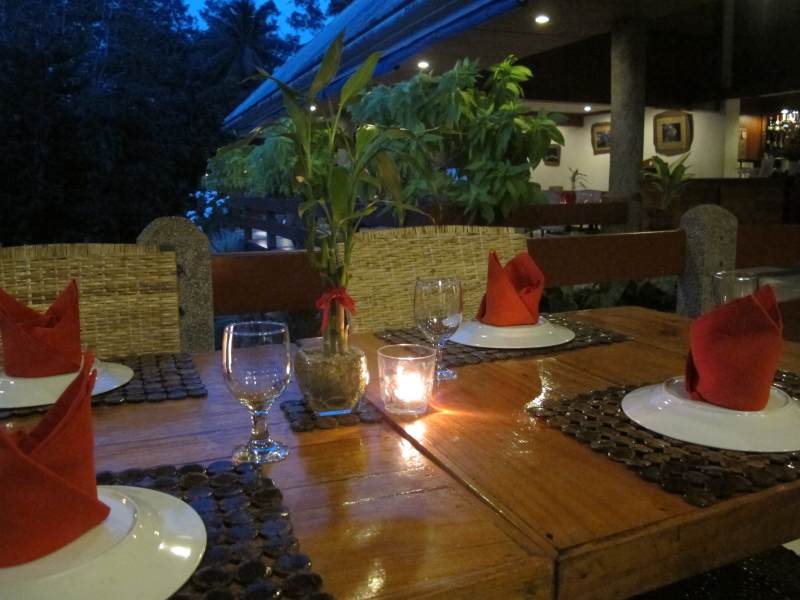 The restaurant is very clean and the staff is well trained and very friendly. The menu goes from Chinese over Filipino to almost Western cuisine. The prices are absolutely reasonable.
For a night with breakfast, we always pay 2000 pesos now for  the 6th year. And if you have to leave before 06:00 a.m., the night before breakfast-pack is prepared for you. This is perfect hospitality.

Shortly before the dinner we had this magic view on Camiguin. We live almost exactly on the opposite side.
Here is the website and the Facebook page of the Mantangale Alibuag Dive Resort.
On Sunday we drove to CdO and fetched our oven at Citi Hardware. Traffic was relatively weak, so we needed less than 3 hours to get there and back. 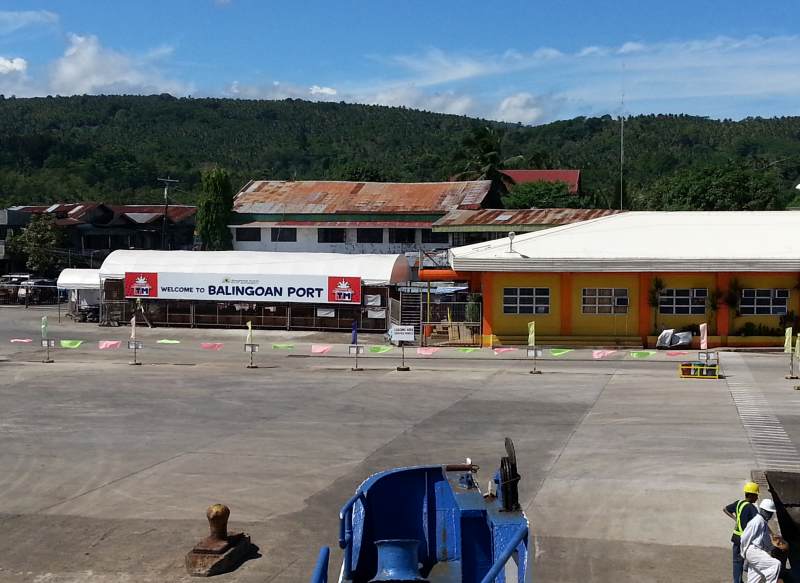 The Port of Balingoan (hmm, yes is written). The weather was wonderful again. 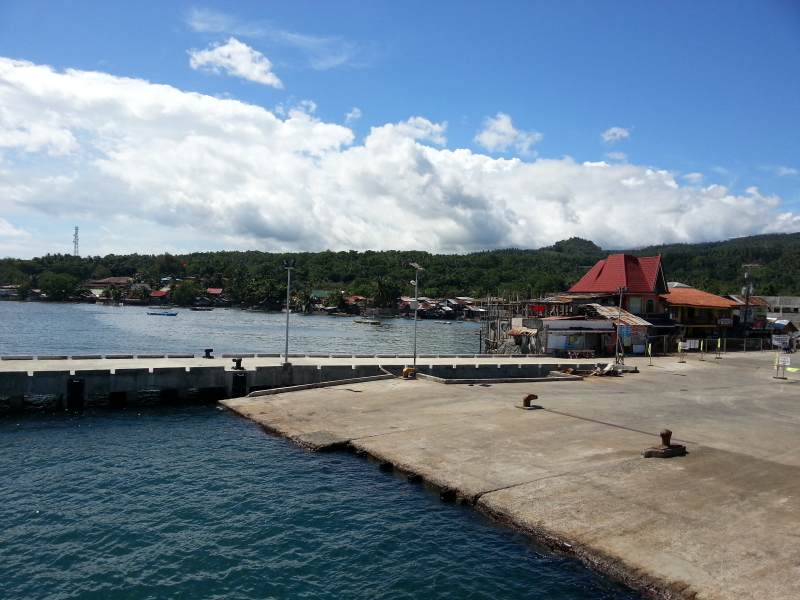 Summary of the 8th day:
Landscape: very hilly, later flat and then along the sea shore.
Interesting: landscape, Butuan, Balangay Museum, Mantangale Alibuag Resort
Address: In the beginning, good condition, from Bayugan to Butuan lots of construction sites, after Prosperidad much traffic
Distance: 267 km
Driving time: 4 – 5 hours
Concluding remarks:
We liked this spontaneous trip very much. With a bit preparation, we would certainly have seen more.  We will do this trip soon again. Then we will also visit places and attractions which we had missed. We’ll probably go there in December and/or January.
Certainly we will insert several stops in Bukidnon. At this point I would like to thank Kai Thoma for his excellent feedback and complementary information. One evening we will certainly hang around in Chico’s in Davao and looking for the Dutchman with the colorful cows.
In Mati we will certainly stay a few days. The Governor Generoso peninsula attracts us. And then I also want to dive here.
Probably we then shall drive up to the Compostela Valley. The gold rush in New Bataan interest me and maybe I’ll find a nugget. We’ll go back to Boston town. We want to bring some useful things to the people there.
And on the way to the north, this time we’ll visit Surigao City. Maybe this trip goes well counterclockwise. Sometimes it is amazing to experience how the sensation thereby greatly changes.