I am writing about the famous Philippines National Power Grid. It is known that they are unable to produce enough electricity for the whole country, that their powe-rgrid is a holly mess, that their equipment is outdated and that big parts of the country encounter frequent brown-outs.

We wanted to contribute to energy saving, invested some pesos more and installed everywhere in our office, in and around our house LED lamps that consume about a fifth of what consumes a so called “energy saving” lamp. We have installed some 150 pieces of LED lamps, stripes and bulbs.

But now we sit in the dark – not completely, but 10 LED spotlights stay dark.

We first thought about the “Made in China” syndrome. Does AKARI produce in China or in the Philippines? I do not want to blame AKARI although the APOLLO LEDs, Landlite and other LEDs survived. And it’s not the LEDs that got blown but their power supplies.

So I opened such a power supply: 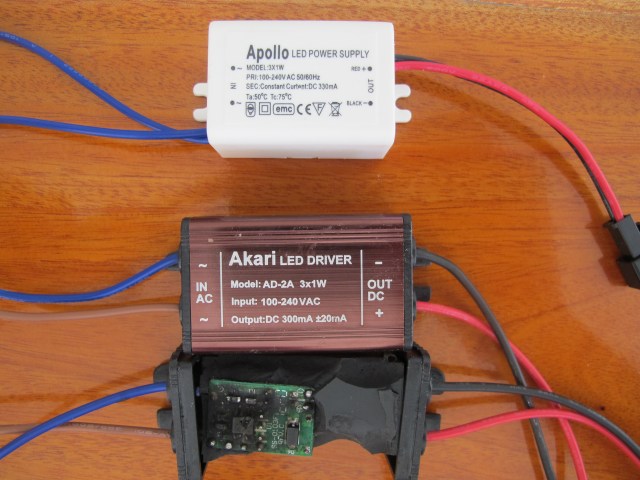 The APOLLO power supplies survived all power surges. But 10 of the AKARI converters (they call them drivers) sent their souls to heaven (or to hell – maybe?) 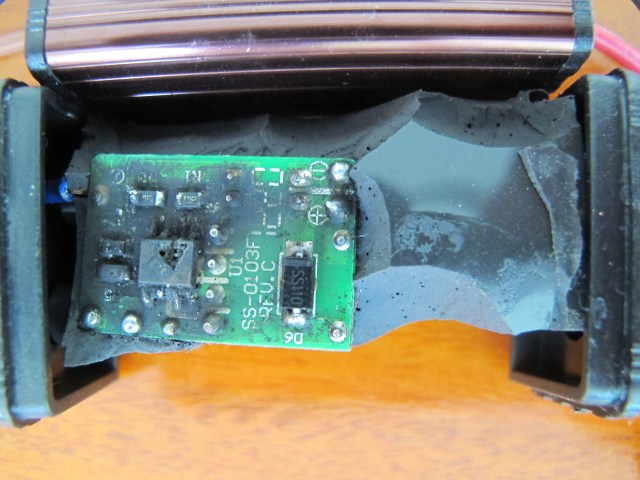 Looks like a very heavy power surge! 313 Volts are really too much.

And indeed, when I measured the voltage and the frequency of our so needed electrical “juice” I went on a horror trip. The frequency, usually 60 Hertz or 60 cycles per second swept between 58.3 and 61.8 Hertz. This can kill your appliances with motors or transformers. But even worse, the voltage that should be a steady 230 Volts jumped between 158 and 313 Volts.
313 Volts!

Electricity is absolutely no fun in the Philippines and it is much more expensive than in rich Switzerland. Who puts our money in their pockets?

If CAMELCO and the whole National Grid Gang can not supply clean electricity, then they should close down and declare the Philippines an “electricity-free” country. This could be a marketing gig among the “greens” in the so called developed and civilized world.

We now install solar-voltaic panels on the roof. And we keep the “juice” for ourselves, because when I talked to the engineer in charge at CAMELCO about feeding into the local grid, he looked at me as if I spoke an ancient Mongolian dialect.

And there is more we are getting mad of, but this will be tomorrow’s story.