A lesson of cooperation

A lesson of cooperation is taught in Camiguin. Two restaurants with two different owners cooperate instead of competing. That could be a good lesson for local business owners.

It is really funny to see how Little Bridges and Casa Roca meet in the center – in Mambajao. Both restaurants are about 6.5 kilometers away from the center, one to the east and one to west. The two restaurants have many things in common and still are so different. Casa Roca had been opened in 2011 by Jim and Evelyn Hann. One year later Barry Niccolls and Meloni Dalana set another culinary accent by opening Little Bridges. (Read also here)

Casa Roca is situated on a cliff above the sea with a great view over to Bohol. The sunsets are legendary. Little Bridges lays secluded in the foothills of Mount Mambajao. The water flowing under the restaurant creates the relaxing ambiance.
Both cuisines are influenced by Thai and European tastes. With their extremely loaded pizzas, Little Bridges goes also a bit towards North America. Meloni even kicks in some ideas from Hawaii. Evelyn often gives a bit of French touch to her plates and sidesteps to Italy with her delicious lasagna. In both restaurants you may ask for spicy surprises.
Two other differences: At Casa Roca Inn you can sleep. And unfortunately Little Bridges  does not have a website but is on facebook. 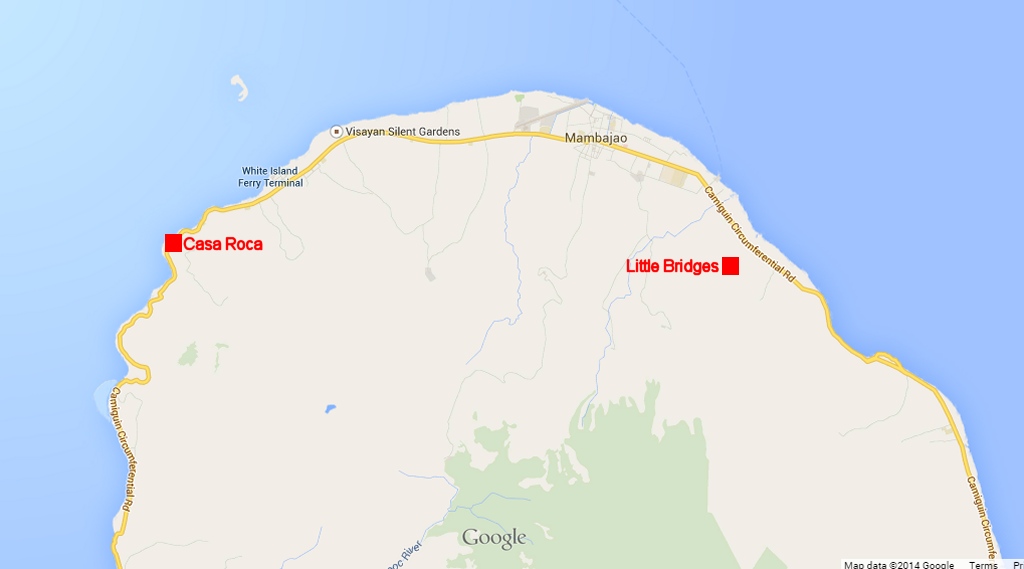 Together we are strong:

There are other samples of good cooperation on the little island of Camiguin. Dive bases help each other when a compressor fails. Resorts offer their swimming pools for the confined water lessons for the PADI certification. Some restaurants help preventing their competitors to be out of stock.

I recently learned of another nice cooperation of former competitors on Bulabog Beach in Boracay. But this another story.