A new hyperbaric chamber in Cebu had been inaugurated by the Tourism Infrastructure and Enterprise Zone Authority (TIEZA)  in their building located in front of Mandaue City Hospital.

A hyperbaric chamber is medical equipment used to treat decompression sickness (DCS) or “diver’s disease,” a condition caused by gas bubbles that occur after decompression. The treatment is the return of the patient to an environment of increased pressure. This is called recompression. Ideally a patient can be recompressed within minutes of symptom onset — bubbles would be quickly eliminated, and symptoms would resolve.

The equipment in Cebu consists of two hyperbaric chambers like the one shown in the featured picture. Each unit costs about PHP 10 millions.  This seems to be a reasonable investment in tourism safety. There are also much bigger hyperbaric chambers with capacities of 10 persons and more. Such big chambers are nearly never needed. Divers usually dive as a buddy team of two. 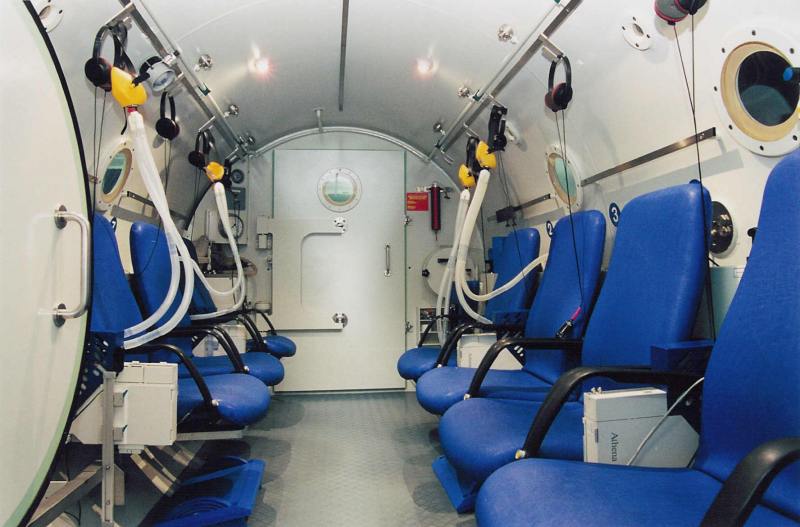 I first thought that Cebu Mandaue wasn’t the perfect place to install a hyperbaric chamber. But Mactan has nice dive sites and Malapasqua is only 3 hours away. But even divers with a DCS from Bohol, Negros or Camiguin can easily be flown in. The nearby airport of Cebu-Mactan is an asset. For example Far East Aviation Services can offer low altitude flights. Low altitude for not to increase the DCS.

If it comes to urgency of treatment, it is determined by 1) the time to onset of symptoms following the dive, 2) cardiopulmonary instability and 3) rapidly progressing neurologic symptoms. A recent retrospective study in the French navy found that 25 percent of divers with DCS had incomplete resolution after one month despite a short delay to recompression (median 35 minutes). Longer delays apparently did not significantly increase the risk of incomplete resolution. A critical factor in good outcomes in severe DCS is the quality of the combined treatment: drug therapy, aggressive rehydration, hyperbaric oxygen therapy and critical care assistance inside the chamber when necessary.