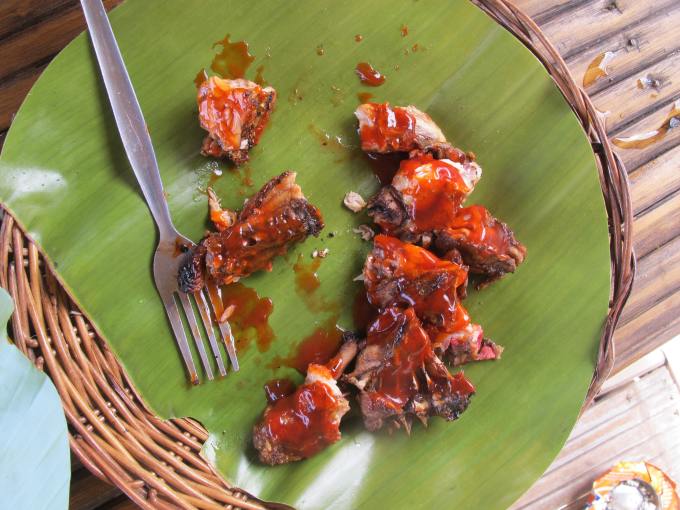 Pinoy gastronomy – kasiyahan or napakasama (pleasure or atrocious)? For our Sunday lunch we went to a well known restaurant on our little island. We ordered grilled fish and BBQ chicken. What you see in above picture is what they call a BBQ chicken.

For this roadkill we payed PHP 190.00. It consisted of about 80% bones and bone fragments. About 50 grams were dry chicken meat. Calculate! 3,800 Pesos for one kilogram of chicken meat, that’s scam. On the local market a fully dressed chicken is sold at PHP 125 to as much as PHP 150 per kilo. My chicken did cost 25 times the market price. The only beer available had been warm San Mig Lite. The Coke of my partner also had rather a tropical temperature.

It is really a pity because the restaurant is in a very nice place, our server was friendly and joyful as always.  It is also a pity because our government spent many many thousands pesos to go to London to promote tourism on our little island and back home they sell this roadkill.

You may say, this is Filipino style, this is Pinoy gastronomy. If you do not like, eat somewhere else. Wrong, Pinoys also want to get food for their money. The only, really only excuse I can find is the fact that the TV is just across the kitchen. Today at noon time Manny Pacquiao knocked down Chris Algieri at least 6 times. The cook, in the heath of the combat, may have done the same with my chicken. Roadkill or Overkill?