Booming Philippines – Many cities and provinces are developing at a breath taking speed.

Almost every day government agencies and investors announce new construction and infrastructure projects. Yesterday, the highest figure ever seen hit the press. President Duterte plans to spend up to PHP 9 trillion in the next six years. This astronomic sum is to build new roads, bridges and transport terminals. This construction spree is expected to generate at least one million new jobs. Higher public spending and robust consumption, coupled with increased investments once foreign ownership restrictions are lifted could drive economic growth to 10 percent.

For the single year 2017, the government has boosted infrastructure spending to PHP 860.7 billion for large-scale infrastructure projects in line with the “golden age of infrastructure” eyed by the administration.

Looking at the all the mega-projects initiated in the last months, we try to find the master-plan.

Everywhere in the country busy workers are widening the national highways. Wherever possible the 2 lane roads are extend to 4 lanes. When having a closer look at these ongoing works, pure chaos is appearing.

San Miguel Corp. yesterday said Boracay Airport has started to accommodate jet aircraft following the completion of its runway expansion. The Civil Aviation Authority of the Philippines (CAAP), meanwhile, has upgraded Legazpi International Airport as a night-capable airport which is expected to boost tourism in the nearby provinces. Do not forget the two other projects that should be achieved next year: Panglao Bohol International Airport and Bicol International Airport. This would allow both domestic and international carriers to fly in direct from countries such as South Korea, Singapore, China, Taiwan, Hong Kong, Japan and Australia, among others.

This strategy might lift the permanent airspace congestion from Manila International Airport. Unfortunately we do not have statistical information from Manila, separating tourist passengers from business travelers.

But where there is light, there is also shadow!

Example 3: The Bridges vs. RoRo Ferries

The government will study the feasibility of building a bridge link between Luzon, Visayas and Mindanao as the new government moves to overhaul the country’s creaking infrastructure. MARINA, the Philippine Marine Industry Authority announced that they will phase-out some 356 old vessels. Many of them are RoRo ferries. Two RoRo companies have completely renewed their vessel park, Starlite Ferries and FastCat. This non-orchestrated development might lead to 3-polar economical quarrels. 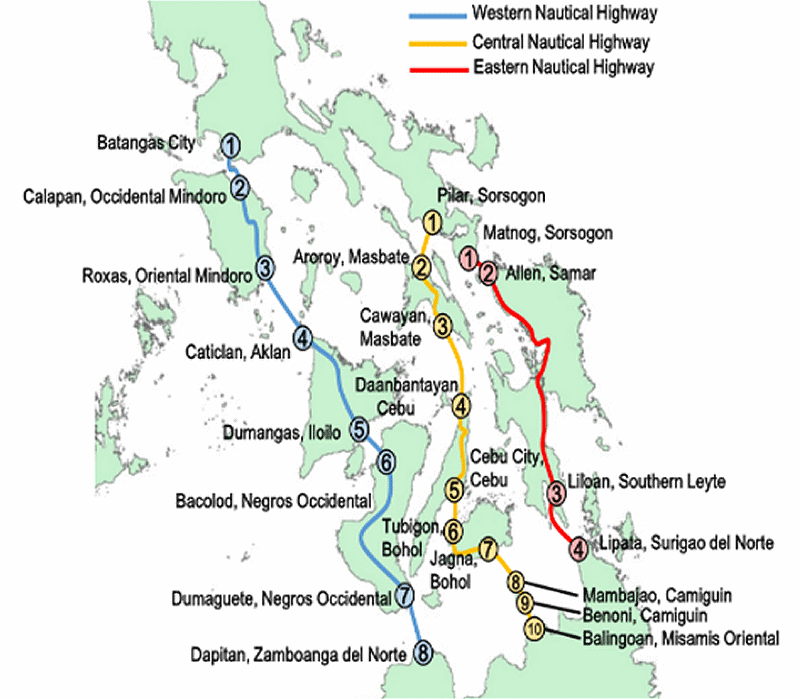 Short bridges may make sense. Short and sturdy bridges like the San Juanico bridge between Leyte and Samar can even survive a violent typhoon. But longer bridges are too fragile. Another point we’ve never read in newspapers: the hydrodynamic effects of bridge foundations. Disturbing underwater currents can change the shape of beaches and whole islands. This changes may disturb whole eco-systems. What would become of Oslob or Donsol if the butanding (whale sharks) would move to other places?

Bridges from and to Bohol would be exposed to strong tectonic earthquakes. Bohol is continuously lifting up from the sea floor.  The effects of the 2013 earthquake can still be seen on Bohol’s west- coast.

The new generation of RoRo ferries on the other hand are cheaper and more flexible. We’ve found 10 years old ferries in good conditions for as low as 5 million Euros. Ferries also can follow the market. A modern ferry runs at 13 knots. This means the ferry can be dispatched in 24 hours to another port 575 kilometers away from the origin. You can have the ferry where you need it and not where it had been built like a bridge.

There is much more to say about bridges vs. ferries. Next week maybe.

Many fantastic railway projects are ready on the papers or ready for feasibility studies, although the currently existing railway lines are in a messy status. Manila’s LRT/MRT sytems struggle with lacks of capacity. The famous Bicol Express cannot operate because of bad maintenance and repair of the tracks. The “Mindarail” project looks like if it came straight out of the Dreamworks studios.

In the recent past we had often written about all these railway projects. We feel sorry, but we cannot believe anymore in this premature announcements and rather propagandist optimism.  The two pictures show the controversy of dream and realty:

To manage and execute such mega-projects, the country needs skilled and educated people on all levels. From the mechanic who safely fixes a nut, up to the project manager who can correlate thousands of parameters, the country is lacking of hundred thousand educated and skillful brains.

Why and where do these brains leave the Philippines? A typical case is a medical doctor we know. After he had finished his long studies he wanted to go the USA and work as a nurse. First: His MD diploma of a Philippine university was not recognized abroad – nowhere. Second: As a nurse in the USA he would have earned much more than he earned as a medical doctor in the Philippines. He only stayed here because he had a nice foreign sponsor.

While our neighbors 1. South Korea, 2. Japan, 3. Singapore, and  4. Hong Kong rank at the top of the Best Education Systems In The World In 2015, the Philippines did even not participate in the study.

To make the boom sustainable, government should channel off PHP 1 trillion of this monstrous PHP 9 trillion budget and invest it in a complete overhaul of the education system.

From my work with AA-Education in Brisbane, Australia, I know that ten thousands of Filipinos apply every year for scholarships only at Australian universities. This fact proves that Philippine students want to learn but cannot achieve their goals in their home country. Once integrated overseas only few of these excellent brains do come back. My brother in law, living in Vienna, Austria, will come back, once he’ll be retired, his children will stay overseas.

The Booming Philippines could slow down this Brain Drain or even reverse it. It would work to make excellent people come back, if money wasn’t invested in useless concrete monuments and other failed projects, but invested in the young brains. Don’t pay wages of 10,000 Pesos but 10,000 Dollars – you’ll see.