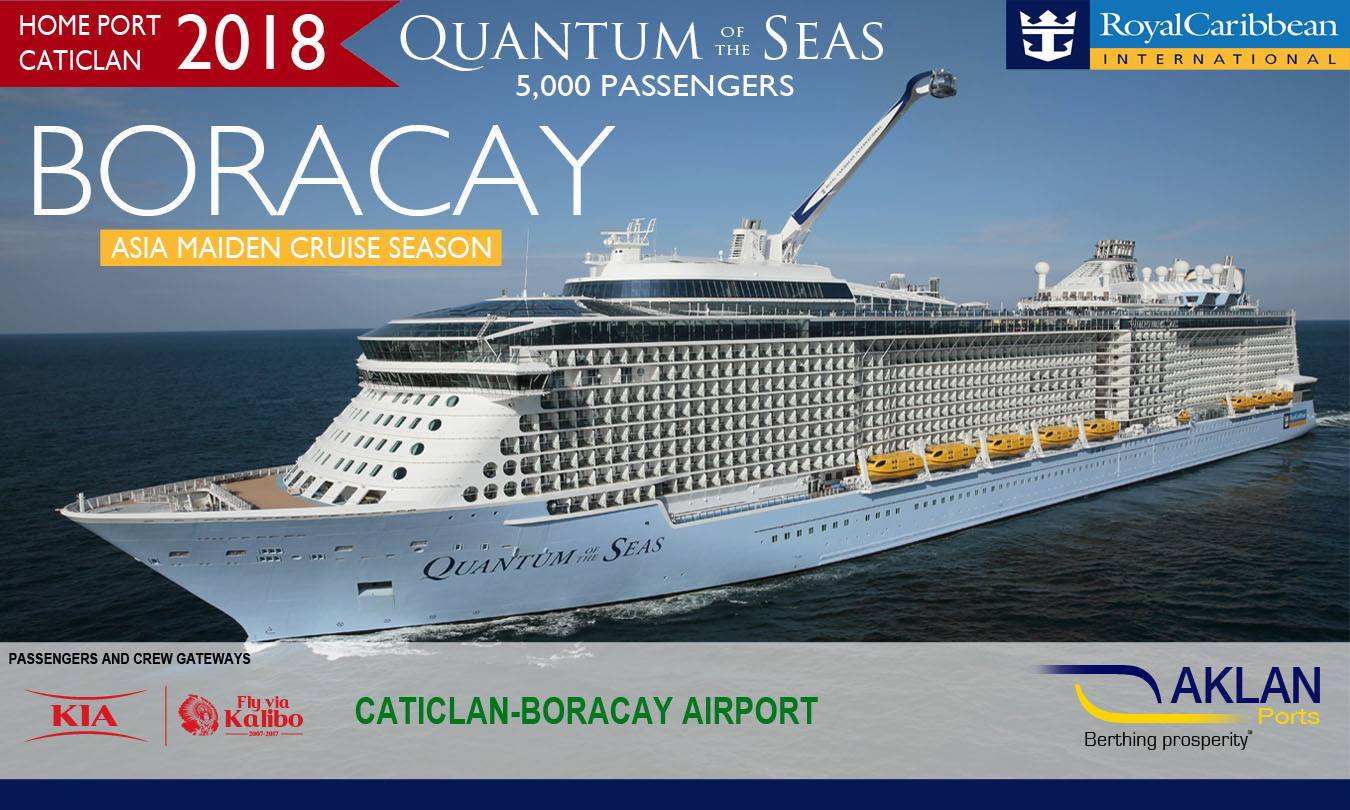 Two years ago, Royal Caribbean International Cruise line (RCCL) had identified three sites – Manila, Caticlan and Palawan for their possible home port in the Philippines. They decided to choose Caticlan because of Boracay. The Aklan province has also 2 airports, Kalibo and Caticlan.  Caticlan is well positioned  within the Philippines and surrounded by many islands and beaches.

Caticlan will not be one of the ports on the journey. It will be the Home Port! RCCL will use this new port as embarkation point for arriving/departing Passengers and Crew.
This also means that the two airports in Caticlan and Kalibo will encounter peak passenger numbers on embarking and debarking days. 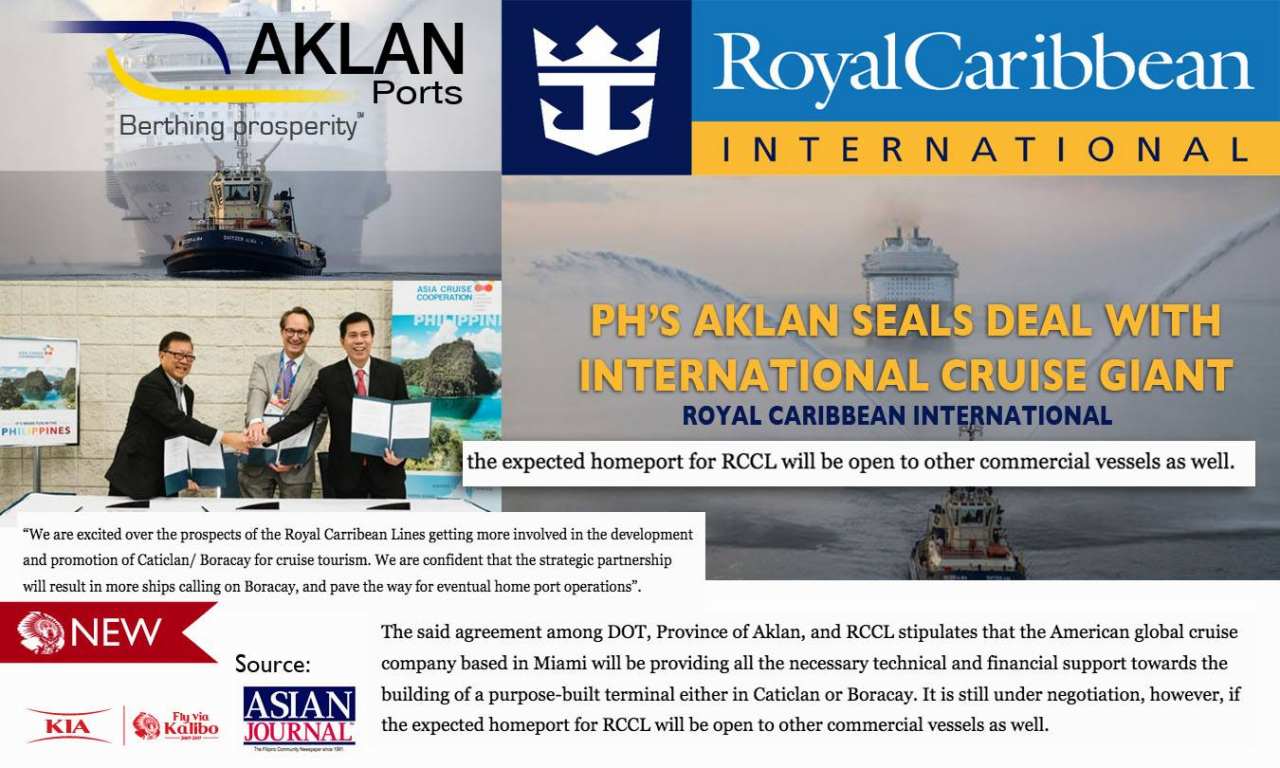 The frenzy has already started

Boracay Island is set to welcome four luxury cruise ships and more tourist arrivals this March until May, the Department of Tourism (DoT) Boracay office said. 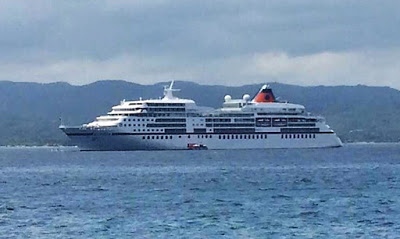 On March alone, three ships will bring an estimated 4,500 international visitors to one of the country’s favourite cruise ship destinations.

GTS Celebrity Constellation of Celebrity Cruises will have its 14-days cruise from Singapore to Singapore from March 5 to 19. It will sail to Phu My and Chan My in Vietnam (March 7-9), Hongkong in China (March 11) and Manila (March 13).

The cruise ship carrying over 2,100 guests and 900 crew members and service personnel will arrive in Boracay on March 14 and will head to Kota Kinabalu in Malaysia on March 16 and Singapore on March 18 to 19.

In Boracay, the passengers will stay from 8 a.m. to 6 p.m. before the ship will depart to Malaysia.

Another international ship M/S Seabourn Sojourn will cruise from March 18 to May 31 for 75 Night North Pacific Exploration Cruise from Hong Kong, Hong Kong to Seattle, Washington.

Some 400 tourists and 300 crew members on board MS Europa of Hapag-Lloyd Cruises returned to Boracay on March 13 as part of 21 nights/22 days, one-way cruise from Koror (Palau) to Manila from February 22 to March 15.

Velete said the M/S Skysea Golden Era, formerly Celebrity Century, is scheduled to port call for the first time to Boracay Island this May.

The agreement between DOT, Province of Aklan, and RCCL stipulates that the American global cruise company based in Miami will be providing all the necessary technical and financial support towards the building of a purpose-built terminal either in Caticlan or Boracay. It is still under negotiation, however, if the expected home port for RCCL will be open to other commercial vessels as well. The governor of Aklan province said the 2.6 hectares reclamation area of Caticlan port passed the standards of RCCL engineers for port development last February. As a home port, a cruise terminal for domestic and international tourists will be build by RCL in Caticlan reclamation area in the last quarter of 2017.

There seems to come a golden avalanche to Boracay, Caticlan and the whole Aklan province. First RCCL will invest big amounts into infrastructure. This also brings employment for local workers. Subsequently cruise ship passengers and crew will spend money, a lot of money in Aklan.

Where there is Light …

… there is also shadow! Imagine up to 5000 passengers and the associated crew arriving in Caticlan port. Can immigration and customs handle this big number? Remember the queues in Manila when 2 or 3 big planes land within 20 minutes. In Caticlan will not be the equivalent of 2 to 3 planes but 20 to 30 planes! Good luck.
For example GTS Celebrity Constellation with over 2,100 guests and 900 crew members will stay in Boracay from 8 a.m. to 6 p.m. These are 8 hours only. Rush 3000 visitors within 8 hours to and from Boracay. Can you imagine the Boracay Central Highway?

Hotels won’t earn a Peso, cruisers sleep on their ships. But restaurants and the tali-papa will dig in a gold mine. And where there is gold, there are lots of people who want this gold. Can local police assure security and safety? The people from the shadows are surely already beginning to occupy the key positions.

Boracay has much changed in the past 15 years. 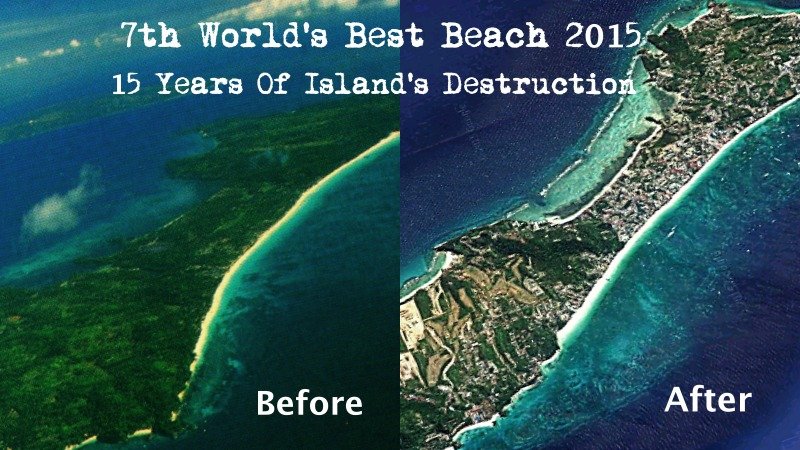 But the cruise ship revolution will again turn upside down the whole island. Infrastructure and transportation must be adapted for short peaks. This means wider roads and more vehicles. Waste water management must also be able to absorb pee and poo peaks.

Will the Boracay Frenzy infect other islands?

Two years ago, Royal Caribbean International Cruise line (RCCL) had identified three sites – Manila, Caticlan and Palawan. These big ships can reach Coron, Palawan, Negros and Bohol within on night. Even Camiguin could be reached within reasonable time.
Well those destinations wont be home ports. But imagine 5000 plus people arriving in Coron, Panglao or Camiguin. Again the local infrastructure would collapse.

I am really curious to see this near tourism future. I therefore look at this development with a smile and a tear rolling off my eye. Let’s hope that we can handle this frenzy!