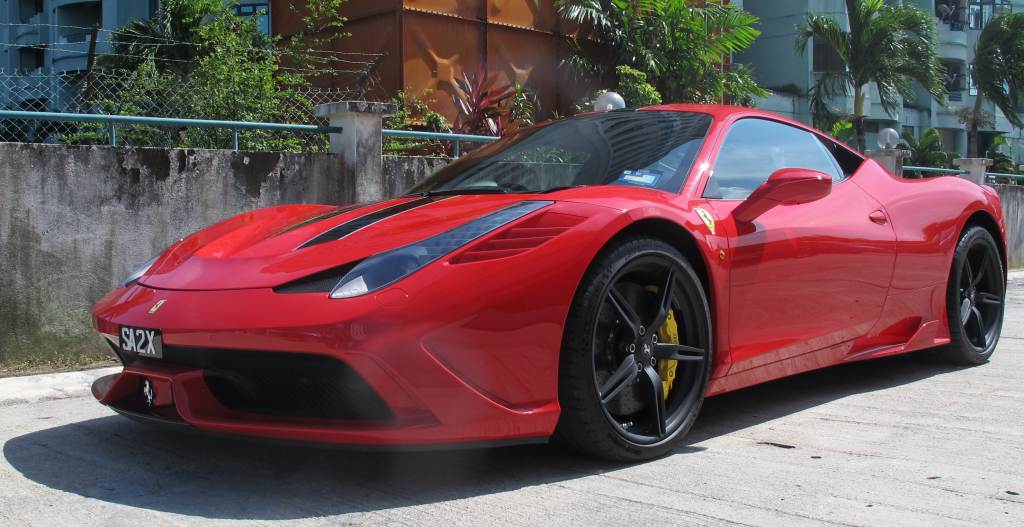 Camiguin vs. Langkawi – Let’s explore the island. First of all we had to organize transportation. We prefer a motorbike because one can stop anywhere, drive nearly anywhere and the top is always open.

To be honest, the Ferrari would have been a pleasure. But first, I have never driven such a powerful car and second, our budget would have gone mad. Then we had the choice between a BMW or a Harley Davidson motorbike and one of these China made scooters. 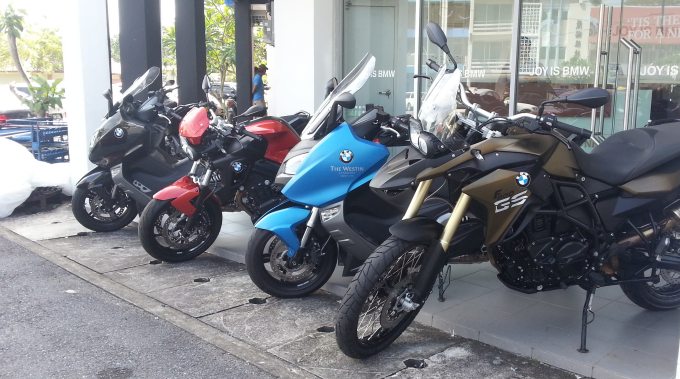 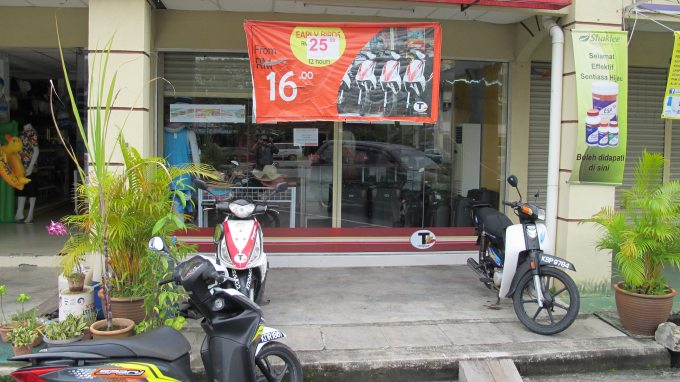 Again the budget told me to be reasonable. The BMW, a K1600GT was MYR 150 (PHP 1,881) per hour, the China scooter was MYR 25 (PHP 313) the first day, MYR 22 the second day and MYR 20 per day for the rest of our stay. This is about the same rate one pays in Camiguin. Interesting are the official sliding scale rates. In Camiguin one also can get the motorbike for 250 Pesos per day, when one knows to haggle and rents the bike for a week or more.

We can recommend T-Shoppe for car and motorbike rental. They have 3 branches over the island.

The bike we rented downtown Kuah, the capital of Langkawi. Kuah is larger and much more busy than Mambajao, the capital of Camiguin. There are several banks and restaurants. We found many shops selling almost exclusively imported goods from China. Compared with the Chinese junk we can buy in Camiguin, the quality of the articles in Langkawi was always superior. Prices were about 20% higher in Langkawi. Interesting were the many chocolate super markets. Whole shops only selling chocolate from all over the world.

An other interesting fact is that the whole archipelago of Langkawi is a duty free zone. Especially alcohol is extremely cheap – and this in a Muslim country. I bought a liter of Chivas Regal 12 years for MYR 50 (PHP 627).

Camiguin vs. Langkawi – Mambajao vs. Kuah

The maps are of same scale.

Camiguin vs. Langkawi – The beaches

There are white sandy beaches and one black sands beach in Langkawi. In Camiguin it is the contrary, beaches in Camiguin are dark brown and only White Island and Mantigue have white sand, extremely white sand. 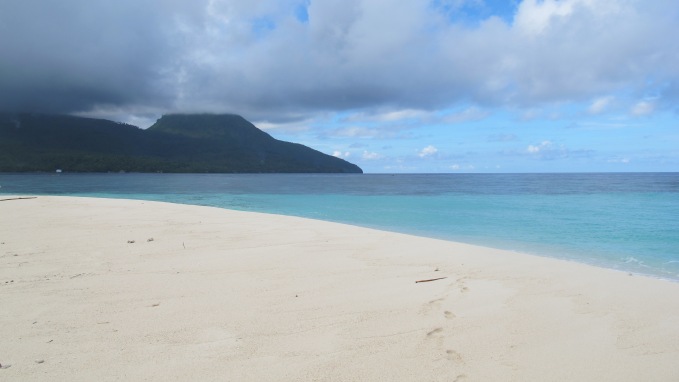 White Island in Camiguin. Wonderful but no shadow. For the beer it’s BYO … 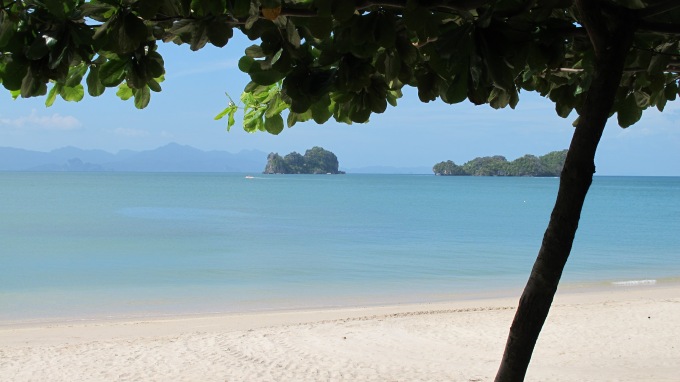 Beach at the Fish’n Chips restaurant in the north of Langkawi out of the village of Kapung Padang Lalang. Nice shadowy place with a cooooold beer.

On all beaches we have visited in Langkawi we found motorized amusements. Motorboats with para-sailing, hundreds of jetski and any other noisy machinery. In Camiguin we count only 2 jetski at the Paras resort in Yumbing.

If you like it less noisy, opt for one of the multiple sailing trips. The Langkawi archipelago is a paradise for sailing trips. One can find boats of any size, from a simple dinghy up to a 3 mast schooner. 3 hours sunset cocktail trips are offered from MYR 230.

While in Camiguin all or almost all beaches are public, in Langkawi we were several times refused to enter and go to the beach. On the northern coast there are several resorts that also own the beach. At one resort’s gate they offered me to fill in a multi-page visitor’s inquiry form. At another resort’s gate the friendly guard indicated the access to the public beach. What we saw made us very sad: 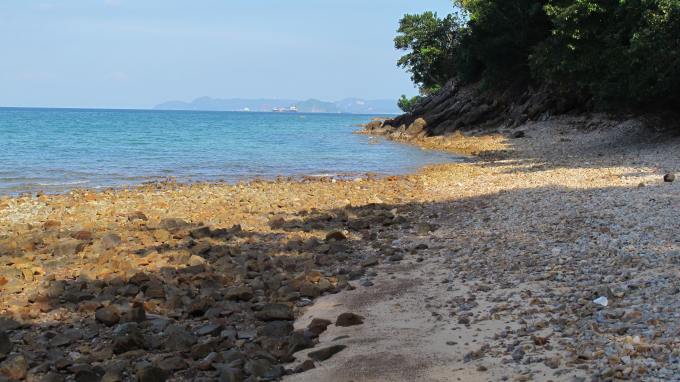 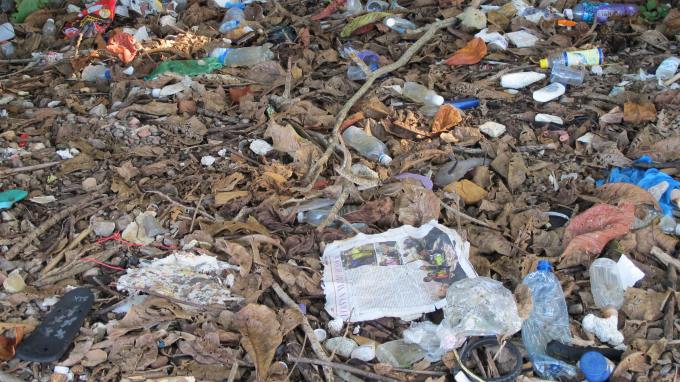 Usually Langkawi is very clean or at least in tourist zones. This beach really had been a trash dump site.

We do not compare zoos because Camiguin has none that merits this title. Lankawi has the Bird Paradise Wildlife Park. If you like animals in cages, this might be your place.
I am just coming back from a sunset stroll on the beach in Agoho. We we encountered about 15 dogs barking on the beach. They aren’t dangerous but disturb a serene sunset. In Langkawi we encountered 3 dogs in one week, 2 of them were accompanied by their owner. 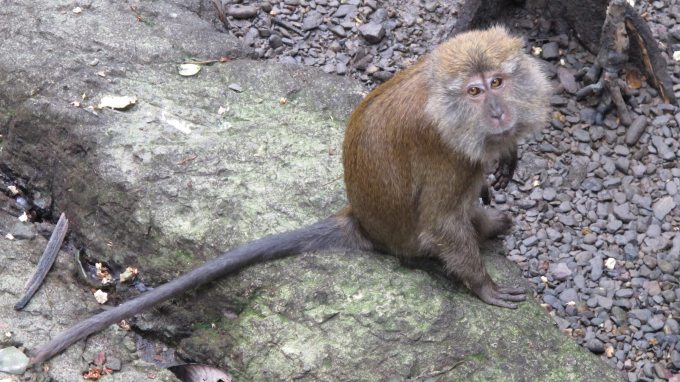 These monkeys are everywhere on the island. During the day one can see them only out of town, but in the night we saw them hush over the roads in Kuah. Locals say that they can be dangerous when excited and then they can bite. Butch once did flee when she encountered such a guy up on mount Gunung Raya. 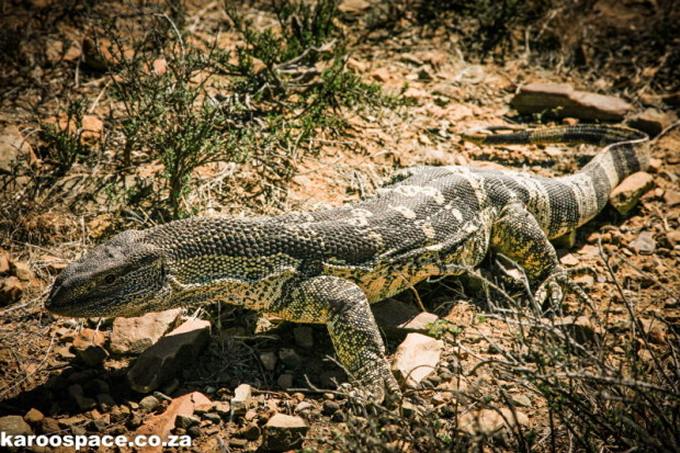 These rather large lizards are roaming all over Camiguin. The largest one we ever met near Sagay was about 1.8 meters long. We even do have them sometimes in our garden. But when I run to get my camera, they are always gone, when I come back. This is why I use above picture from the web. These animals are big but absolutely not aggressive.

That’s all for today. In the next article we’ll some tourist attractions and the mountains.