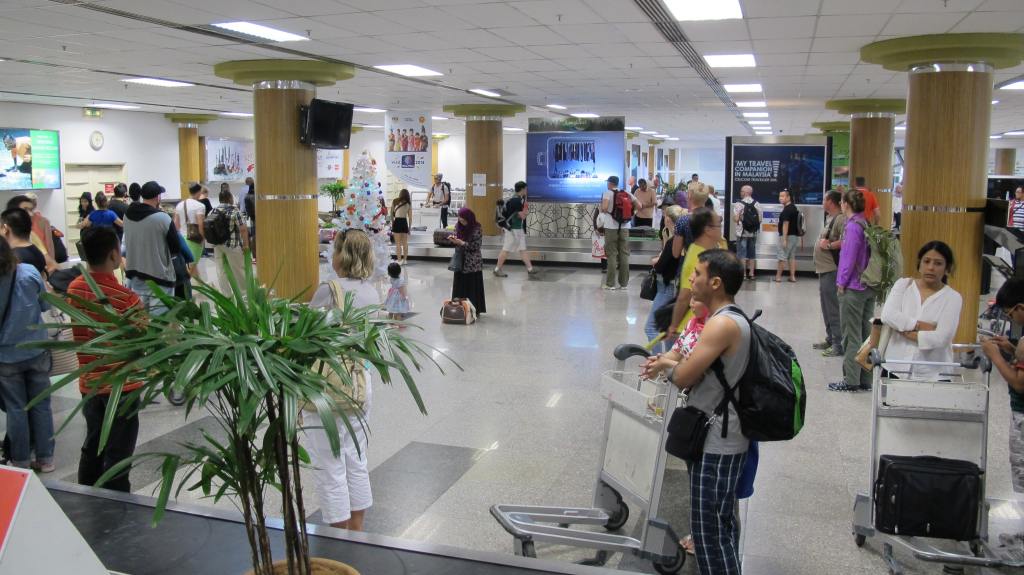 Camiguin vs. Langkawi – The flight from Kuala Lumpur to Langkawai needs about 50 minutes. When you are lucky, you can see Penang from your aircraft. Skyscrapers on an island – oh, no!

The approach on Langkawi airport is wonderful. One can see islands and rocks in the sea and lots of boats sailing between these islands. Our A320 made a perfect landing and I saw that they have ILS from both directions. Wow!

The terminal building has about the size of Cebu-Mactan’s airport. But there are no docking gates and everything is celebrated on only one level. I’d say, about 6 times the size of Camiguin airport. It has been easy to find our carousel out of 4 carousels. 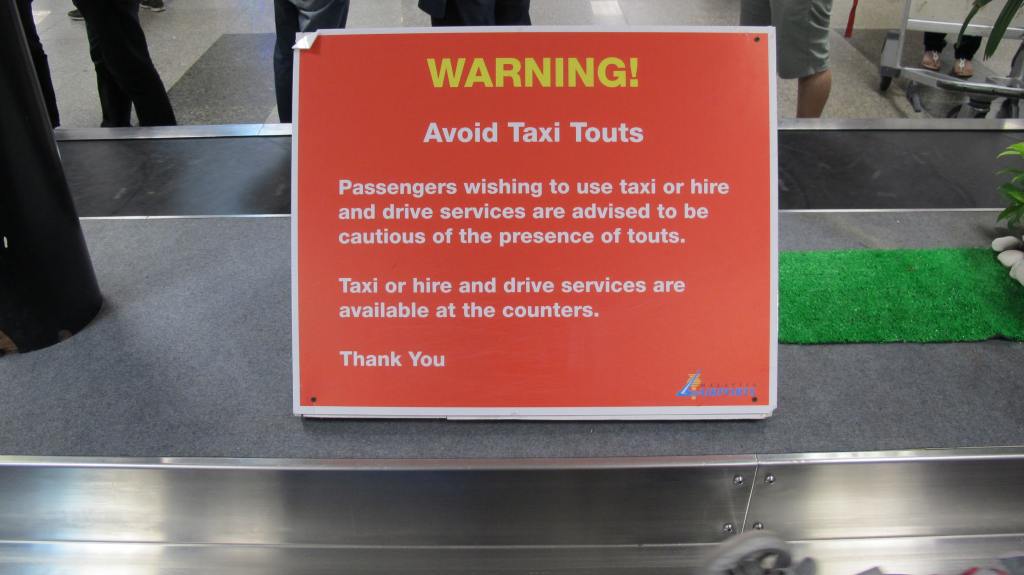 This sign should be placed at any airport in the Philippines. We were warned  and hired a pre-paid taxi for MYR 30 (360 Pesos) to Kuah, the capital of Langkawi. The driver and his wife were very funny and gave us many hints. Butch had a big chatting time while I had been astonished to encounter a 4 lane highway on this little island. Average cruising speed was about 80 km/h. The taxi brought as to our hotel in Kuah within 35 minutes.

Being used to righthand traffic from UK, Malta and Thailand, I had no problems with the taxi-drivers way of driving. I was astonished by the speed and discipline of all the drivers. No honking – really none, and everybody used direction indicators. What a pleasure to drive. 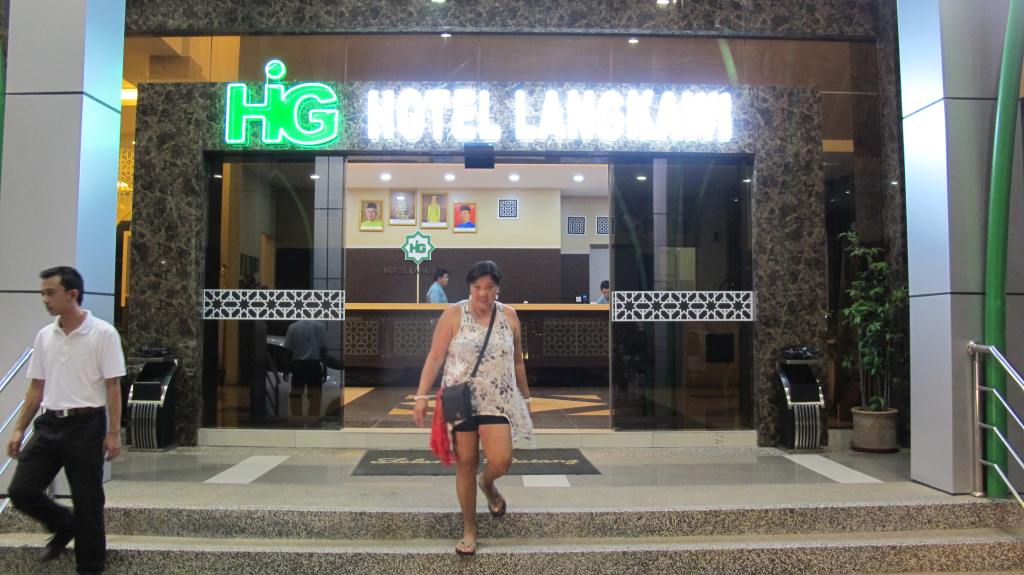 We arrived at the HIG hotel later in the afternoon. Our Agoda reservation was accepted without problems and we got the room’s key card. Our smoker’s room (Butch doesn’t smoke, but I still do) was on seventh floor. Nice equipment with a king-size bed. We liked the bathroom and the bed. The view from the window also had been nice.For sleeping, this hotel is absolutely recommendable. 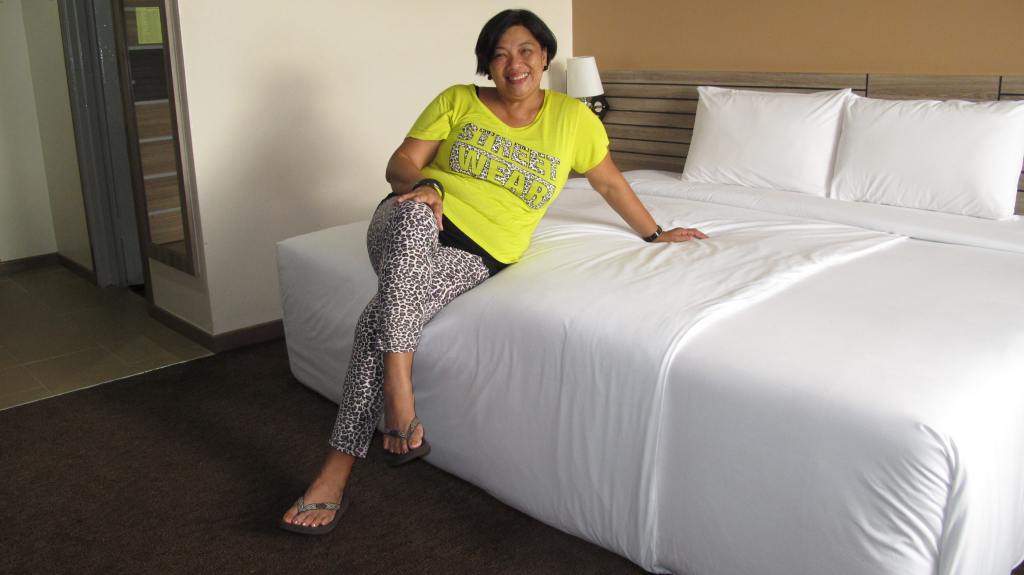 The hotel has a shopping mall and a restaurant. The shopping mall sells any kind of chocolate. and Chinese made plastics and porcelain and household items. If you like a beer, you have to cross over the road. The restaurant is a bit strange. If you are Asian Muslim, you will be happy. If you are a  globetrotter with European background, you rather go over to the local eateries. Be careful, they serve North-African and Indian specialties. They are spicy. I loved them, but Butch’s stomach made some troubles two days later. I’ll write about Langkawi Hospital.

20+ flights from Kula Lumpur to Langkawi. Maybe 1 flight from Cebu to Camiguin. Compared with Langkawi, Camiguin is completely off-track.
I’d say that only Paras Resort in Yumbing, Camiguin could compete with the HIG hotel in Kuah, Langkawi. And there are many better resorts in Langkawi.

Tomorrow we’ll rent a car or a motorbike to explore the island. There is much choice: 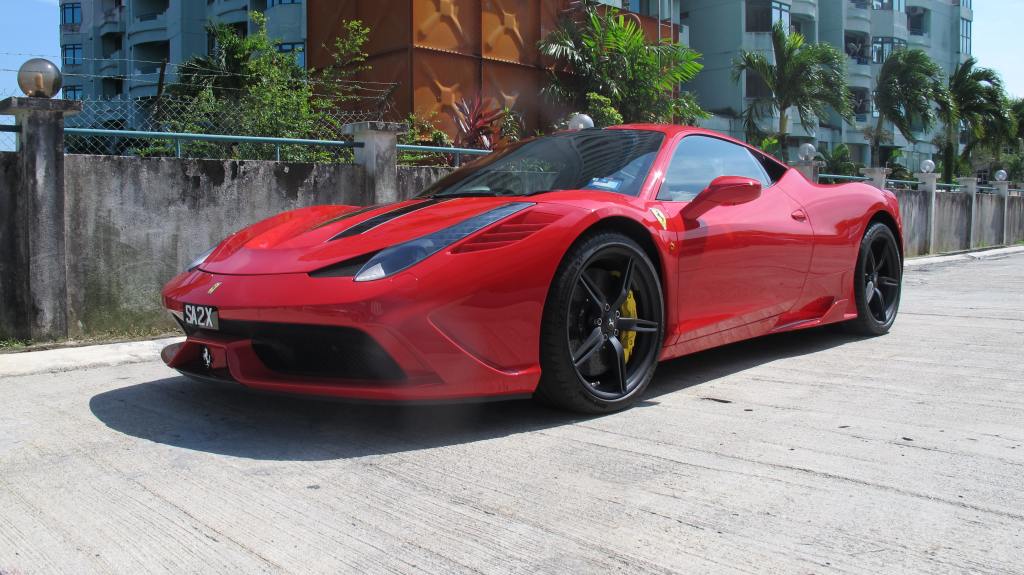 Camiguin vs. Langkawi. Why not rent a Ferrari instead of a jeepney?

Tomorrow maybe. I got some remarks about my “tomorrow maybe”. Sorry, during the day I am installing solar power for our house and our guest-house. Sometimes I am too tired to write after having climbed up to the tower 20 times a day. But now we are 50% solar. This blog-entry is 100% solar powered!

See you tomorrow. Harley-Davidson or BMW or Ferrari?