Concrete Madness in Camiguin – For now over two years a big construction activity can be observed in Camiguin. It is to be said that Camiguin has the best maintained roads of all the Visayan and Mindanao islands.

The circumferential road is in an excellent state and is continuously maintained. Currently 2 bridges in Mambajao are replaced by new ones. All around the island, big rainwater trenches are built on the land-side of the road. In some landslide prone areas strong walls are built to protect the road.

When we first visited the Tuasan Falls in 2007, we could drive with our motorbike a bit past Mainit. There we had to leave the motorbike and had to follow two boys who showed us the trail through a huge and almost natural rain-forest. The short trek was wonderful and lasted about 40 minutes. 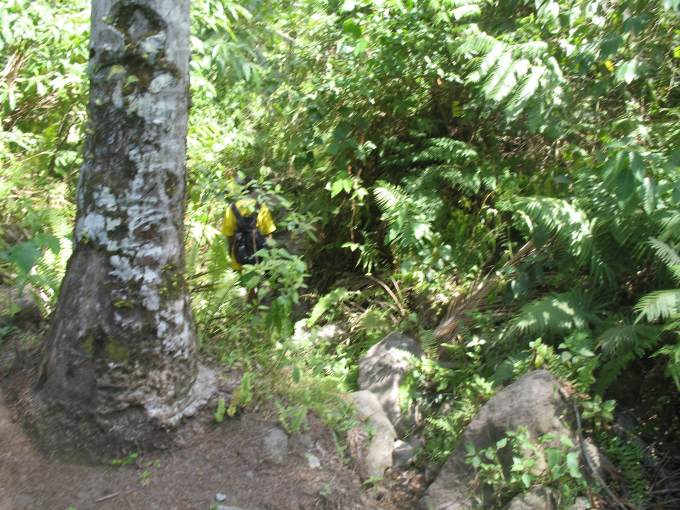 After a bit sweating a wonderful scenery opened before our eyes. 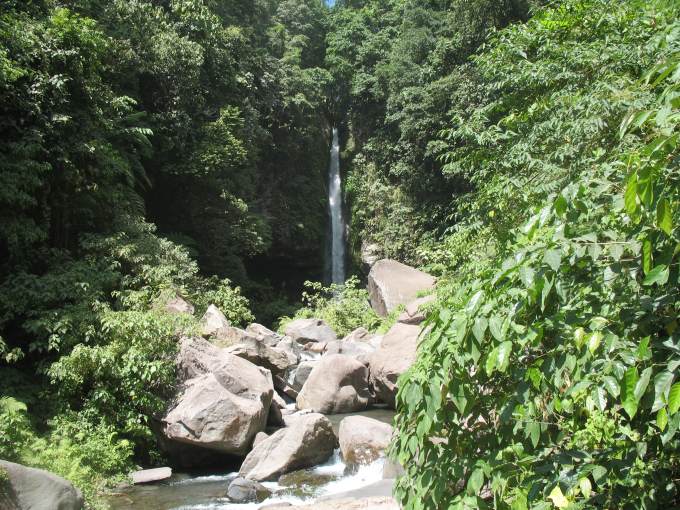 The natural pools filled with refreshing water invited for a dip 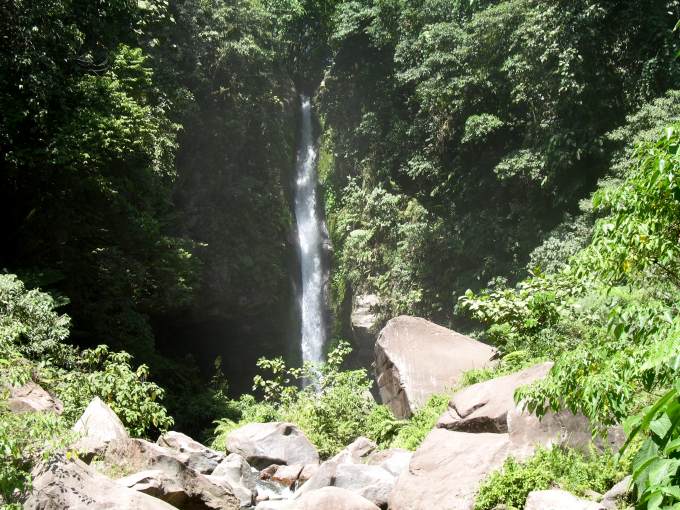 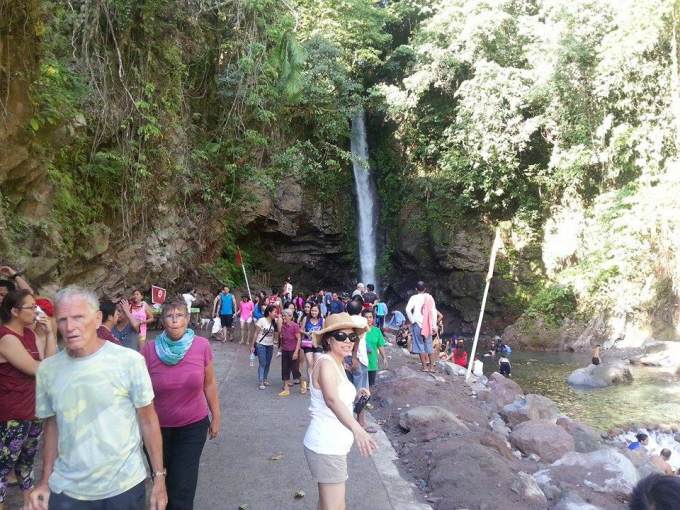 The whole forest is destroyed over kilometers and the scenery has lost all its fascination.  It is nice that people in a wheel-chair can now visit this beautiful waterfall, but a 4 feet wide concrete track would have been absolutely enough. But no, they constructed a full size Barangay road. This is the Concrete Madness in Camiguin.

And that’s not all …

The access road to the Tuasan Falls is only a small part of the trans-insular highway, linking Mambajao with Catarman. This road winds up the mountains between Mount Hibok-Hibok volacano and the Tres-Marias mountains. The road culminates at 600 meters above sea level. This road isn’t a simple Farm-to-Market road or a Barangay road. No, it is a full size highway!

At the entrance of the Tuasan Falls a parking lot for several hundred cars had been built. On busy days some 10 vans and jeepneys get lost on this giant concrete field. 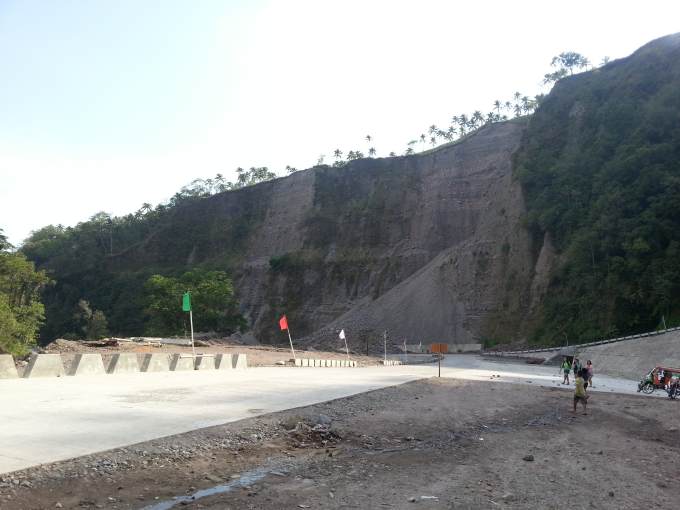 The people who planned and built this road had no knowledge in geology. And no geological analyzes had seriously been done before work started. In the background of above image one can clearly see one of the hills that is continuously sliding down on the road. These landslides have already damaged and partially destroyed the road 3 times. When continuing driving up in the mountains, one discovers 4 more landslides that have covered parts of the road. 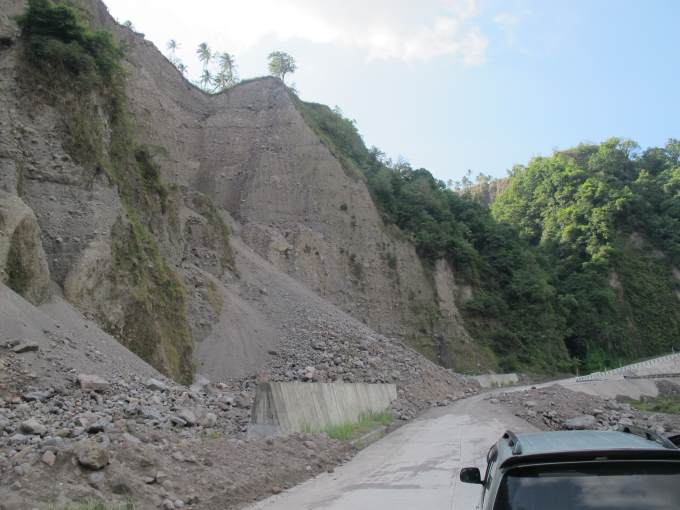 This hill will continue sliding and will only stop when the whole hill is down!

Any junior geologist knows that most volcanoes aren’t built of solid rocks. Mount Hibok-Hibok is a stratovolcano built of Hornblende andesite and dacite.

A stratovolcano, also known as a composite volcano, is a conical volcano built up by many layers (strata) of hardened lava, tephra, pumice, and volcanic ash. Unlike shield volcanoes, stratovolcanoes are characterized by a steep profile and periodic explosive eruptions and effusive eruptions, although some have collapsed craters called calderas. The lava flowing from stratovolcanoes typically cools and hardens before spreading far due to high viscosity. The magma forming this lava is often felsic, having high-to-intermediate levels of silica (as in rhyolite, dacite, or andesite), with lesser amounts of less-viscous mafic magma. Extensive felsic lava flows are uncommon, but have traveled as far as 15 km (9.3 mi). Stratovolcanoes are sometimes called “composite volcanoes” because of their composite layered structure built up from sequential outpourings of eruptive materials. They are among the most common types of volcanoes, in contrast to the less common shield volcanoes. (from Wikipedia)

On above picture the different loose layers of rocks, pebbles, sand and ashes are well visible on the broken slope. 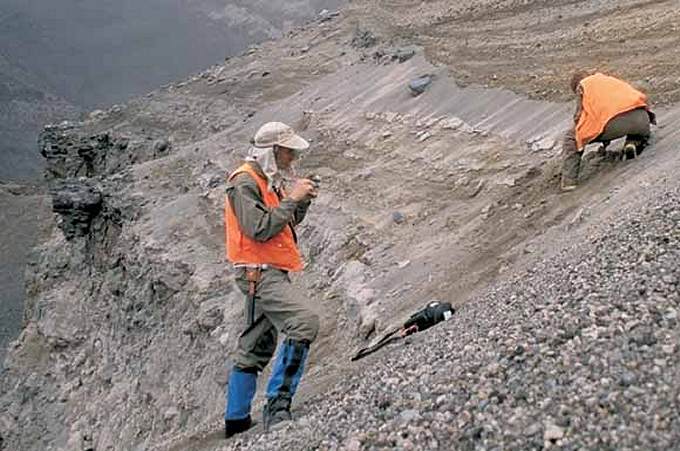 Analyzing the underground is expensive and needs time. But securing the slope at the Tuasan Falls is much more expensive and almost impossible.

If this trans-insular road had been built as a Barangay road, then much less forest would have been destroyed. And no hills would have needed to be cut. See the part of the road that goes uphill from Mambajao. It is absolutely sufficient and almost disappears in the landscape. The hundreds of millions of Pesos spent for this prestigious project could have been spent much better e.g. for education. This project is a revenue perpetuum mobile for the construction company. Concrete Madness in Camiguin or the right to print money. Silly question: Who pays?