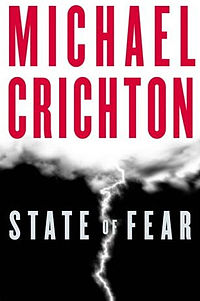 The rate of global mean warming has been lower over the past decade than previously. It has been argued that this observation might require a downwards revision of estimates of equilibrium climate sensitivity, that is, the long-term (equilibrium) temperature response to a doubling of atmospheric CO2 concentrations.

from 19 May 2013. The article uses highly scientific language an terms.

ECS, the equilibrium climate sensitivity is related to the global mean temperature change ?T, the radiative forcing change ?F, and the change in the rate of the total increase in Earth system heat content ?Q.

Short: the 17 co-authors write that the earth warming between 2000 and 2009 had been lower than expected. They also write that actually the warming stabilizes, although the amount of greenhouse gas increases in the atmosphere. Quo vadis earth warming?

Had Michael Crichton been right in his novel “State of Fear”?

… global warming is the theory that increased levels of carbon dioxide and certain other gases are causing an increase in the average temperature of the earth’s atmosphere because of the so-called ‘greenhouse effect.’ (p. 81)

The second definition is correct. “Global warming” really is only a theory, not a fact, and the words Crichton chose to italicize are all key terms in the scientific debate over whether the theory is correct or not.

The main villains in the plot are environmental extemists. Crichton does place blame on “industry” in both the plot line and the appendices. Various assertions appear in the book, for example:
The science behind global warming is so incomplete that no reasonable conclusions can be drawn on how to solve the “problem” (or if the “problem” even exists).
Elites in various fields use either real or artificial crises to maintain the existing social order, misusing the “science” behind global warming.
As a result of potential conflicts of interest, the scientists conducting research on topics related to global warming may subtly change their findings to bring them in line with their funding sources.
Crichton argues for removing politics from science and uses global warming and real-life historical examples in the appendices to make this argument. In a 2003 speech at the California Institute of Technology he expressed his concern about what he considered the “emerging crisis in the whole enterprise of science—namely the increasingly uneasy relationship between hard science and public policy.