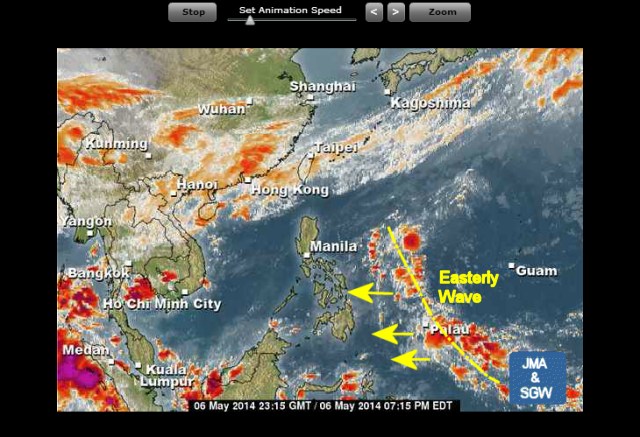 The dam levels of the Angat Dam in Luzon and Lake Lanao and Pulangi River in Mindanao approach critical limits.

Water elevation of Angat Dam, the main source of domestic water for Metro Manila and irrigation needs of Central Luzon farms, continues to recede and is now close to the 180 meter critical level. On 05/07/2014 in the afternoon, the water level stood at 181.89 meters and was receding approximately 31 centimeters a day.

During an El Niño period in July, 2010, Angat Dam reached its lowest level at 157.76 meters that prompted authorities to temporarily stop operations of the dam to protect its turbines from breakage. Now, if the daily average water level drop continues, water elevation at Angat Dam will reach 176.30 meters this month, 169 meters by June, 161.60 meters by July, and 154.30 meters by August.

The Pulangi River in Bukidnon, Mindanao’s second major source of electricity, has also almost dried up forcing the National Power Corporation (NPC) to shut down two of the three turbines in the Pulangi hydropower complex. Since Tuesday night, Cagayan de Oro has  imposed a 7.5 hour daily rotational brownout across the city.

An approaching Easterly Wave, being now over Palau, might bring a short relief this weekend. A stationary frontal system south of Taiwan might disturb the Easterly Wave. The clouds might not reach Luzon. The situation in Mindanao looks a bit better. The Easterly Wave might bring rain-clouds over Bukidnon, where they probably let fall enough rain to fill Pulangi River a little bit.

The high volcanic mountains of Camiguin provoke rain nearly each night. The rain falls only up in the mountains and on the higher slopes. The beach-front is extremely dry now. Fortunately the mountain sources bring enough water to the lowlands. The second rice harvest 2014 is nearly complete on the whole island.