Ghost Nets in the Philippines – a small Step to Recycling

Ghost Nets are everywhere in all our oceans. These are commercial fishing nets that have gotten lost, abandoned, or discarded at sea. Ghost nets are trapping and killing millions of marine animals including sharks, rays, bony fish, turtles, dolphins, whales, crustaceans, and birds.

The fatal Cycle of Ghost Nets

Ghost Nets drift with ocean currents for years, or even decades. Modern fishery uses nets made of different kinds of plastics. On the fishermen’s side the durability is much appreciated. But on nature’s side this means that lost nets menace marine life. When these nets break up into smaller pieces, they are ingested by many animals. Inspections of stomach contents of sea mammals showed extreme amounts of plastics.

A drifting ghost net might eventually become so heavy due to its catch that it sinks to the bottom of the ocean. On the seabed, smaller ocean dwellers start feeding on the entangled marine animals, which, along with natural decomposition, reduces the weight of the net to the extent that it floats back up to the surface. Once the ghost net is again drifting with the ocean currents, it starts its cycle of ghost fishing, sinking and floating back up all over again.

Watch first this video to get an impression of the size.

This movie had been produced by AegeanRebreath.

Unnoticed by bathers, thousands and thousands of lost fishing nets lie on the seabed of the world’s coastal regions. Others float on the open sea – far away from civilization. Ghost nets are responsible for 30 to 50 percent of marine plastic. The UNO Food and Agriculture Organization (FAO) estimates that 25,000 lost nets with a total length of 1,250 kilometres float in the European waters seas.

AegeanRebreath makes the ghost nets available to the Blue Cycle research project. The project’s mission is to make the contents of commercial fishing nets more environmentally friendly. They also started to set up an exchange system for fishermen so that the motivation to illegally dispose of useless nets in the sea disappears.

Several small recycling projects for recovered nets exist in the Philippines. In the program called NetWorks fishermen of Guindacpan island recover Ghost Nets and sell them to recycling companies. Especially during low season this cleanings give work and money to the local fisher folk. Unfortunately the recovered nets are  first sent to a recycling facility in Slovenia. Afterwards they are shipped to factories in the USA and Italy where they’re turned into carpeting tiles. This means an almost round the world trip of the nets and derivative products.

A much smarter approach comes from Camiguin’s innovative community Komunidad sa Baibai. Masterminds of the newest creation are again Cocoy Bajuyo and Elden Chamberlain of Agoho. Many tourists of Camiguin island already know their “Treasures Camiguin” shop in Bug-ong. 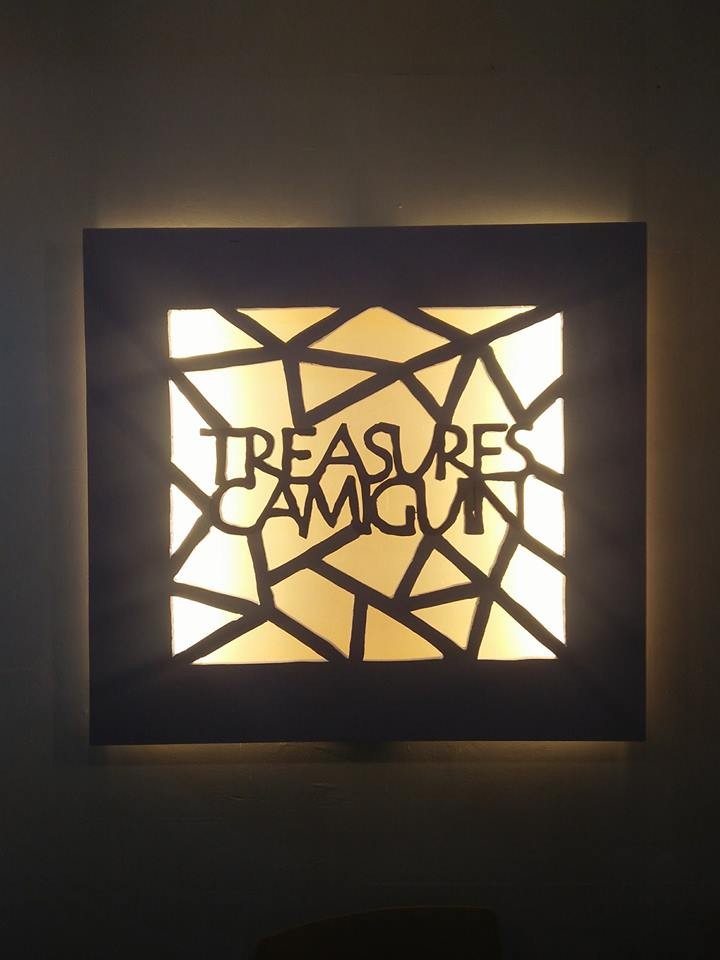 For over a year now, the shop and gallery exhibit and sell “Camiguin Sea Glass” jewellery. Hangers and finger rings created of glass debris polished by the sea.

Already above projects recycles debris into beautiful new creations. But their newest project goes even a step farther. Fishermen and divers recover ghost nets on our coast and especially in the marine sanctuaries. They bring the nets back to the beach where local people clean them. After cleaning, they bring the nets to the community’s workshop. There busy fingers separate the nets by colour, thickness and quality.

But see yourself. The video below shows how waste becomes beauty.

We need more such projects

These multi-tiered projects not only help cleaning our oceans, they also bring employment on many different levels. When we walk on the beach with our guests, we explain them the project. The effect is really amazing. Almost immediately they start to collect glass and look out for net debris. All the collected “goods” are then proudly brought to the “bar sa baibai”. 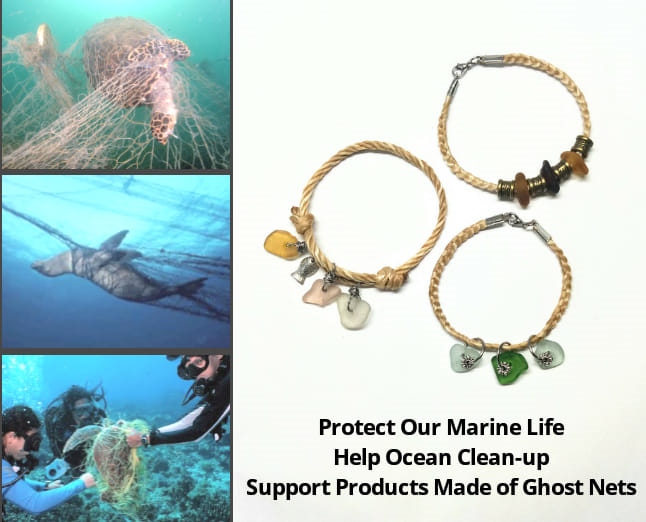 It is also interesting to see how such a project brings competitors together. Fishermen and divers are in permanent competition. The first ones want to get the fish out of the sea, the second ones want to meet them under water. The common work on the ghost nets brings them nearer to each other.

I am proud to live on one of the cleanest beaches in the Philippines – on Agoho Beach. Maybe you also like to visit the upcoming website of Agoho.