Jazz Legend Dave Brubeck has left us – let’s swing him up! 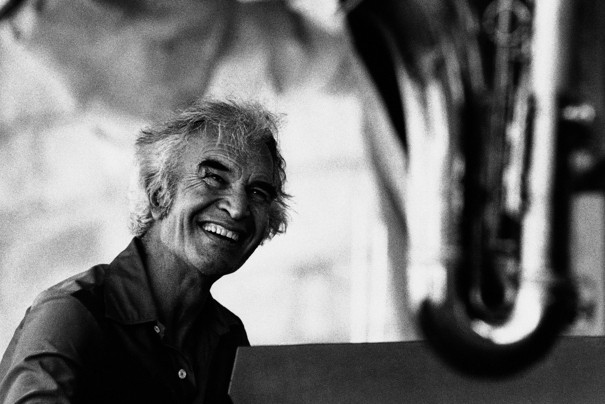 “Take five” took its last way!
Good bye Dave. We had so funny nights together in lower East-Side.
Thank you Dave, your music makes me still happy every day.

Jazz pianist and composer Dave Brubeck, who tinkered masterfully with rhythm and style and won millions of new fans around the world for the quintessentially American musical genre, died yesterday of heart failure at the age of 91.

A day shy of his 92nd birthday, Brubeck died at a hospital in Norwalk, Connecticut, his manager Russell Gloyd told the AFP.

Brubeck won a slew of awards over the course of a career that spanned more than six decades. He was still playing as recently as last year.

He played at the White House for presidents and visiting dignitaries, and was designated a “Living Legend” by the Library of Congress.

Brubeck’s 1959 album “Time Out” became the first million-selling jazz record of the modern era, as songs “Take Five” and “Blue Rondo a la Turk” defied the indifference of critics to become classics in the genre.

A big party had been planned for this Sunday to celebrate Brubeck’s 92nd birthday, but he fell ill on Wednesday, and his son called for an ambulance, which took him to the emergency room.

“They came up later and said we just can’t keep this heart going,” Gloyd said.

Brubeck’s success cemented his reputation as one of the great popularizers in the history of jazz, after years of nudging the music into mainstream culture by relentlessly performing on university campuses.

His Dave Brubeck Quartet also toured the world on behalf of the United States government, becoming so popular in Europe and Asia that it was said that when Washington needed to fix up damage somewhere, they sent in Brubeck.

According to Brubeck’s Web site, highlights of his career include the premiere of his composition “Upon this Rock” for then Pope John Paul II’s visit to San Francisco, California, in 1987.

His accolades included receiving the National Medal of Arts from then President Bill Clinton in 1994; a Lifetime Achievement Award from the National Academy of Recording Arts and Sciences; and a star on the Hollywood Walk of Fame.

Brubeck himself once described his approach thusly: “There’s a way of playing safe, there’s a way of using tricks and there’s the way I like to play, which is dangerously, where you’re going to take a chance on making mistakes in order to create something you haven’t created before.”

Over the course of his career he also experimented with integrating jazz into classical forms. In 1959 his quartet played and recorded with the New York Philharmonic under Leonard Bernstein, and a year later he composed “Points on Jazz” for the American Ballet Theater.

In a 2010 article marking his 90th birthday, the Los Angeles Times said that even non-jazz lovers knew Brubeck.

“Through more than 60 years of recordings and performances at colleges, concert halls, festivals and nightclubs all over the world, Brubeck put forth a body of work, as pianist, composer and bandleader, that is as accessible as it is ingenious, as stress-free as it is rhythmically emphatic, as open-hearted as it is wide-ranging,” the paper wrote.

Born on December 6, 1920 in Concord, California, Brubeck at age four was improvising tunes from the classical pieces he was taught by his piano teacher mother.

But he dreamed of being a rancher like his father, and went to university to become a veterinarian, only to transfer to the music department when a teacher noticed he spent all class staring out the window at the conservatory.

His raw skill at the keyboard concealed the fact he had not yet learnt to read music, and he was allowed to graduate in 1942 only after promising never to become a music teacher.

After World War II, Brubeck studied with French classical composer Darius Milhaud, who told him jazz was the best music for expressing the spirit of the United States (US).

He began his career in earnest in 1947, playing in San Francisco for the first time with Paul Desmond, whose delicate lyricism on alto sax would later help make the Brubeck quartet famous.

After nearly becoming paralyzed in a 1951 swimming accident, Brubeck assembled his first quartet with Desmond and built up a new and young audience by relentlessly touring universities at the suggestion of Brubeck’s wife Iola.

“Jazz Goes to College” in 1954 sold more than 100,000 copies and led to Brubeck becoming the first jazz musician ever to appear on the cover of Time magazine.

Brubeck learned about it from his idol Duke Ellington, who showed up at his hotel room with the issue of Time, which called the quartet’s work “some of the strangest and loveliest music ever played since jazz was born.”

“It was the worst and the best moment possible, all mixed up, because I didn’t want to have my story come first,” Brubeck told a US television interviewer.

“He was so much more important than I was – he deserved to be first.”

The choice of a relatively unknown white musician over a black star like Ellington sparked the ire of some colleagues and critics, many of whom felt his offbeat music didn’t swing the way jazz should.

But it also made him a household name and paved the way for the success of “Time Out,” which used rhythms unusual to jazz that Brubeck had heard in his travels around the globe.

Fuelled by pioneering drummer Joe Morello, the album hit the top of both the jazz and popular music charts. The group sold millions of records before disbanding in 1967.

Brubeck kept up a broad interest in all forms of music. He wrote a chorale for Pope John Paul II’s 1987 public mass in San Francisco, and performed at the 1988 Moscow summit meeting of Ronald Reagan and Mikhail Gorbachev.

“Take Five,” written by Desmond, remains the quartet’s best known piece. Brubeck’s own compositions “In Your Own Sweet Way” and “The Duke” have become staples of the jazz repertoire.

Bye from a friend