Nice – sunny – hot : Philippines! The thermometer is now climbing up to 32°C (90°F) on the beaches in Camiguin. That’s cool because in the big cities like Manila or Cebu they catch temperatures of 35 to 38°C (94 to 100°F). It is sunny all over the country and absolutely no cyclone or depression is menacing.

Readers were asking me why I write such messages about wonderful weather. I ask back: What do you prefer typhoons, flooding and landslides or sunshine, beach and gentle blue sea? I prefer to write about things I love! 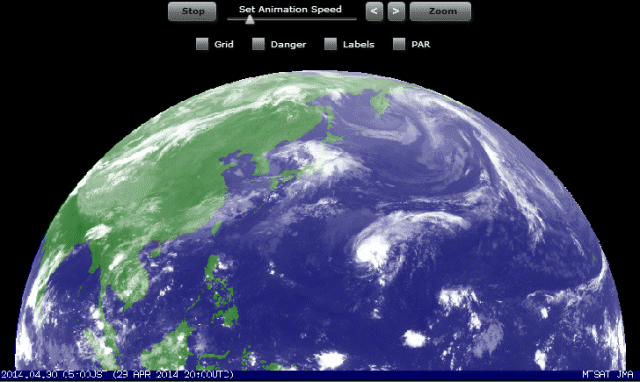 The movement of the Paific atmosphere is well visible in our 24 hours satellite loops.

Typhoon TAPAH, visible a bit right of the center, moved north-east as predicted. It now is over colder waters and has been downgraded to a Severe Tropical Storm. This system will not affect the Philippines.

And the rest of the northwestern Pacific ocean is clean.

At least for the next 5 to 7 days the Philippines will be BBQed under a bright sun.