Swimming in the Philippines

No we do not think of tourists swimming in the hotel pool or in the sea, we think about swimming Pinoys and Pinays. Can they swim?

Years ago, when I still lived on Panay Island, I often went out with the local fishermen. To my big surprise, only half of the crews could swim. And now, when we go to Mantigue Island or White Island, off the shores of Camiguin, we see lots of Pinoys and Pinays of all ages swimming with swim vests.

A few weeks ago, a friend of us, Beate, showed us photos of swim training for kids in Mambajao, Camiguin. Beate’s son Rob is avid swimmer. Last week, another friend, Sean, talked to us about swimming contests for kids. Sean teaches his two daughters Zita and Keena himself.  This made us curious and we started to search information about swimming lessons in public and private schools.

We crawled through Philippines’ laws and school regulations, but couldn’t find that swimming is somewhere included in the school sports program. There are two Republic Acts, #6847 which creates and establishes the Philippine Sports Commission, and #10588 which establishes nationwide Olympic-like games (Palarong Pambansa).
We have talked to teachers and students and found that swimming lessons in school start only at college level. Not all colleges offer swimming lessons and  not all reach college grade.

Living with water all around the island  😎 , and many hot and cold springs inland, parents organize private summer classes and/or teach their kids themselves. The Villa Paraiso Resort & Apartelle in Mambajao (Población), offers their wonderful swimming pool for the kid’s training. We heard that the entrance fee is as low as 30 Pesos per trainee. If you are interested, contact the resort directly  +63 88 387-0419 or villaparaisoresortapartelle@yahoo.com

Our friend Sean is himself a very sportive guy. He teaches his two daughters Zita and Keena himself. Also Sean’s private lessons are held at the Villa Paraiso Resort & Apartelle. 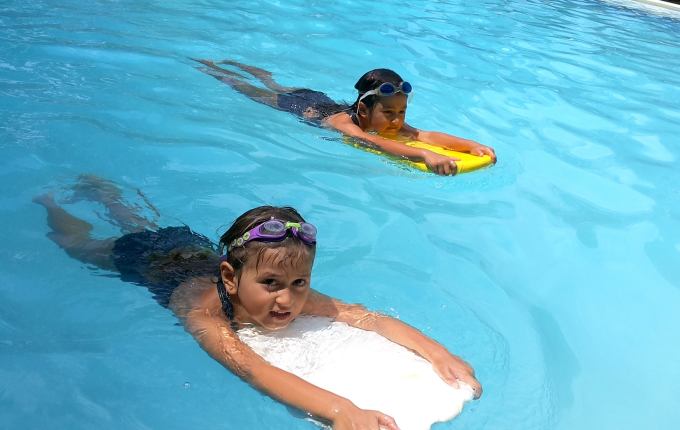 I have been privately coaching my girls in swimming for the past several years but there has never been s swim tournament to enter them in on Camiguin (and it’s important to be able to compete in the Sport that you are training in).

This year they are participating in the 2015 Milo Interschool Swimm Tournament held in Cagayan de Oro on May 30, 2015.  I have entered Zita and Keena as entries from Camiguin.  The events are 25m Freestyle, 25m Breaststroke and 25m Backstroke.

It is significant because, perhaps, next year, we could have other Camiguin entries in the tournament from Camiguin.  Camiguin itself does not house such Sports tournaments, but it is important for athletes to be able to compete, and Cagayan seems a great option.  I know that the Cagayan organizers would welcome future Camiguin entries.

We fully agree with Sean. Here is a link to the 20th MILO AG_MEET INFOKIT 2015 for all those who are interested.

#1 Silent Gardens think that parents should create a Kids Swimming Association. Such an association would make many things easier for the parents. We think of qualified instructor hiring, pool reservation, competition planning and enrollment. If interested, Silent Gardens may bring interested parents together. Use the comment form below to get in contact with each other.

#2 Silent Gardens think also of the under-privileged kids here in Camiguin. The proposed Kids Swimming Association could invite other kids to the training lessons and sponsor competition participation. What do you think?

Little kids easily learn swimming by playing in the water. It is much fun and it wonderfully cools down during these hot summer days. And another important fact: Anybody who can swim in fresh water, swims without problems in sea water. The contrary is much more difficult because of the huge difference of buoyancy.