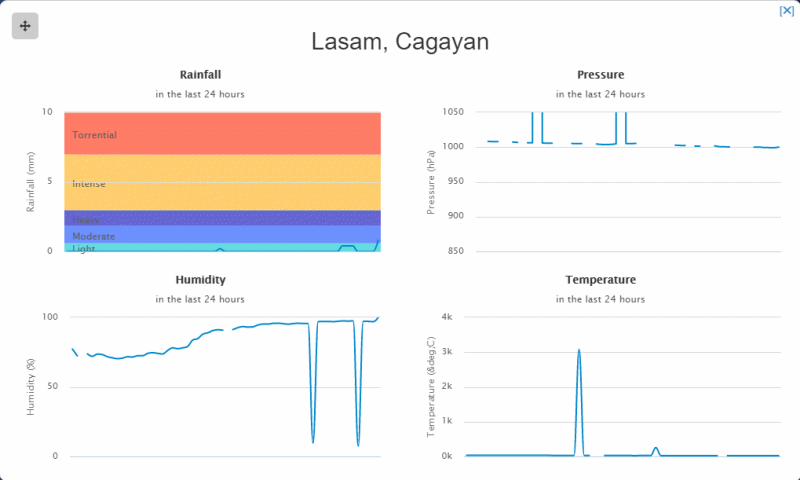 Tropical Storm NIDA / Carina is now in the vicinity of Sta. Ana (Aparri) in the north of Luzon. The exact centre cannot be measured.

Tropical Storm NIDA / Carina increased both, forward and circular speed. Rainfall is moderate to strong. Unfortunately PAGASA has updated the Project NOAH software. The Doppler radars aren’t live anymore. Only static overlays are now available. The dynamic Doppler radar pictures allowed a much better estimation of the position of the storm centre. One also could see where the heavy rainfall (rain-bands) is moving.

The new screen interface is nice, but the information provided is 100% nuts! Today’s Doppler radar image does absolutely not fit with the satellite observations. See our 24h satellite animations. We had a closer look at the Noah picture and found a date stamp – see the yellow arrow. Here is an enlarged picture of the date stamp:

The Doppler overlay is from December last year! This is not only incredible, this is dangerous!

We then tried to get weather information from the Sta. Ana weather station:

No data available! What does this mean? Is the weather-station in Sta. Ana down? Is it damaged? Is there no communication?

We then went to nearby  Lasam Gagayan weather-station. Here we got some data. But this data also is worth absolutely nothing.

It seems that communication with this weather station is often interrupted. Instead of displaying no data, The NOAH project guys display boggy information.  And the code boys who programmed the front-end, the user interface, seem just having started their PHP, HTML and JAVA courses. Look at the vertical temperature axis: The &deg; code represents the ° circle so that it can be displayed in all languages. The code hacker juniors forgot to close the quotes either ‘ or “. A temperature scale going up to 4k°C or 4,000 degrees Celsius would be appropriate for the sun.

How can a government agency DOST / PAGASA put such a dangerous mess on-line?

Let’s go back to

The storm will run today over the northern top of the Philippines. It has wind speeds between 75 and 95 km/h.
Once it reaches the waters in the Batanes group of islands, it will intensify and become a typhoon category 1.
Typhoon NIDA / Carine will then head almost straight towards mainland China. There it will make landfall in the vicinity of Macau – Hong Kong – Guangdong on August 2.