Philippines Rail and High Speed Train Dreams are flaming again since the election of the new president. [updated]

The Philippines had once been a great railway nation. Rotten railway tracks can still be found in many places. At its peak, the Philippine Railway System stretched for 1,140 kilometres in the islands of Luzon, Panay and Cebu. World War II, economical and natural disasters destroyed this one large network. Only Manila’s MRT and LRT are working today. The famous Bicol Express from Manila to Legazpi had a short revival in 2012. The sugar trains in Negros have been replaced by trucks. For more information to this current state read our Philippines Railway Page. 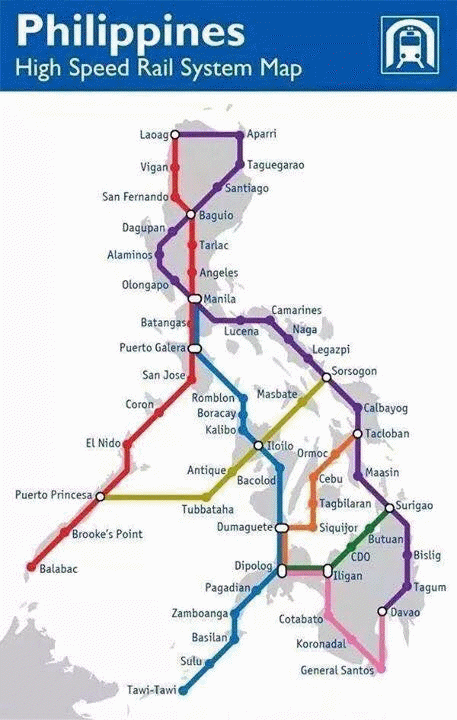 The Adobo Chronicle wrote: With over 7,000 islands separated by water, the Philippines has faced major challenges in bringing about fast and efficient travel within the country, thereby creating barriers in terms of trade, tourism and unity among Filipinos.  Not anymore.
The new Philippines President, Rodrigo Duterte promised to abandon the Philippines’ claim to the Spratly islands in the South China Sea provided China builds trains that would make it easier for Filipinos to travel within their country. Duterte’s statement caught the attention of the Beijing government and asked for more specifics.
In response, Duterte unveiled his plan for a Pan-Philippine high-speed railway system that would connect the northernmost province of the Philippines to the southernmost tip in Tawi-Tawi. Davao City’s former mayor wants China to pay for building the system.
China is reportedly very interested but is still withholding a final decision.

This mission is absolutely impossible. Bridges over the sea over long distances and deep grounds cannot be built. Already a tropical storm would damage them and a typhoon would destroy them. And the mountain provinces cannot be reached by high speed trains. We consider this project rather as a funny joke during this year’s battle for presidency.

There are 3 main projects: The Mindanao Railway Project, The Panay Railways and the Cagayan-Sorsogon Project. Some engineers also speak about a bullet train project between Clark airport and Manila’s NAIA. We think that parts of these wonderful projects can be built. The big problem isn’t the construction. The big problem is maintenance. Maintenance is the most feeble point of Filipino society. It isn’t a problem of know how, that can be learnt. It is a cultural problem. Similar cultural problems can be found around the Mediterranean Sea.

Just 2 weeks ago, a maintenance problem at Manila’s airport could have ended in a disaster. Runway asphalt punctured flaps of a Boeing 747 from Eva Air after landing. Preliminary investigation results suggest that a poor asphalt mix had been used by the contractor resulting in degraded load capacity, thus not able to support heavy aircraft like A330s or B744s. When the Eva Air B744 rolled over that asphalt a section 1 meter wide, 9 meters long and 12cm deep separated and were blown against the flaps by the engine exhaust.

The  Bicol Express line had been interrupted by a landslide in 2012. This 250m stretch has not yet been repaired. Cause: No money. A bridge near Naga City is still damaged after floods had destroyed some important structural pieces.

Anyway, there are projects that are worth to be discussed. 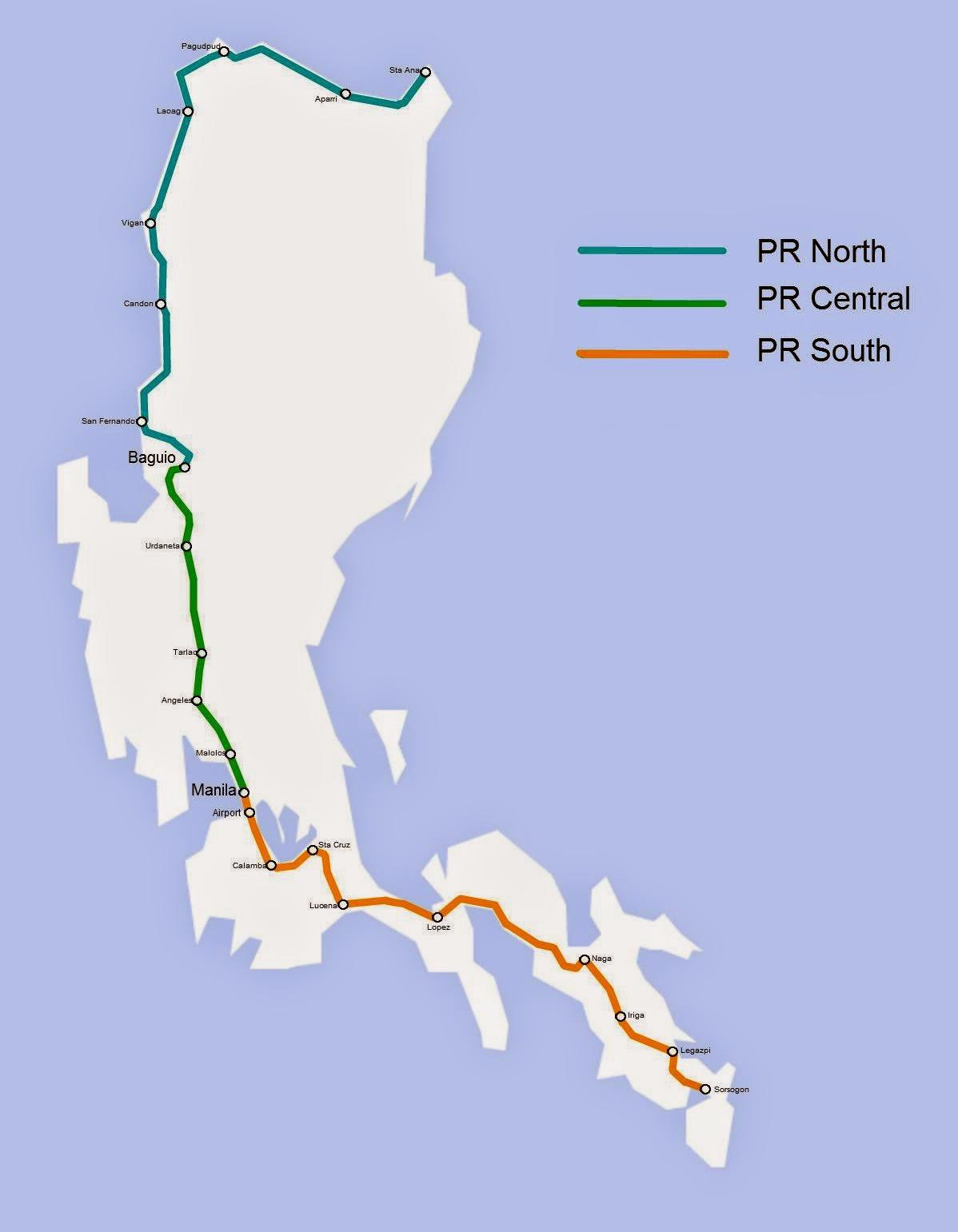 The Philippines Rail project form North Luzon’s Cagayan region down to Sorsogon in the south follows the old railway tracks on long stretches. This railway can be built with reasonable financial risks. The only really difficult parts are the climb and descent to and from Baguio. We think it would be better to follow the lowlands and build a regular bus line up to Baguio. The stretch between the airports of Clark and Manila could be built as bullet trains. This project could be finished within 5 to 6 years. 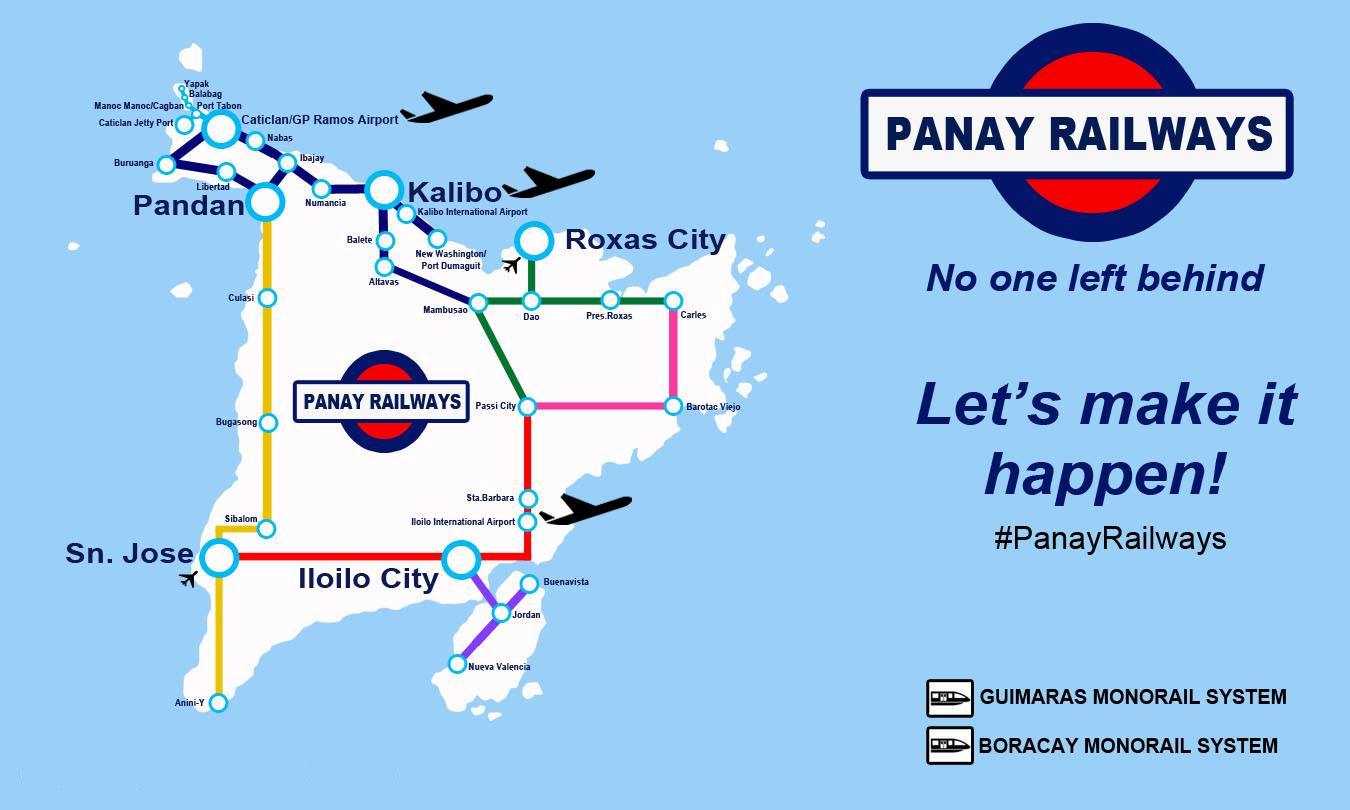 Since the 1990s people on Panay island speak of their railway system. The dreamers of KIA (Kalibo International Airport) have published above map. It is an absolute maximum project, but the ideas are good.  Iloilo – Kalibo – Caticlan is the most important line. This line is an economically reasonable project if airline traffic is concentrated in Kalibo. The other lines probably never would reach break-even because of high maintenance charges. Pandan,  Culasi and Islas Gigantes would probably get their benefice from easier access. This yellow line has another important advantage: Should the main line from Caticlan to Iloilo be interrupted somewhere, trains could still follow the west coast. 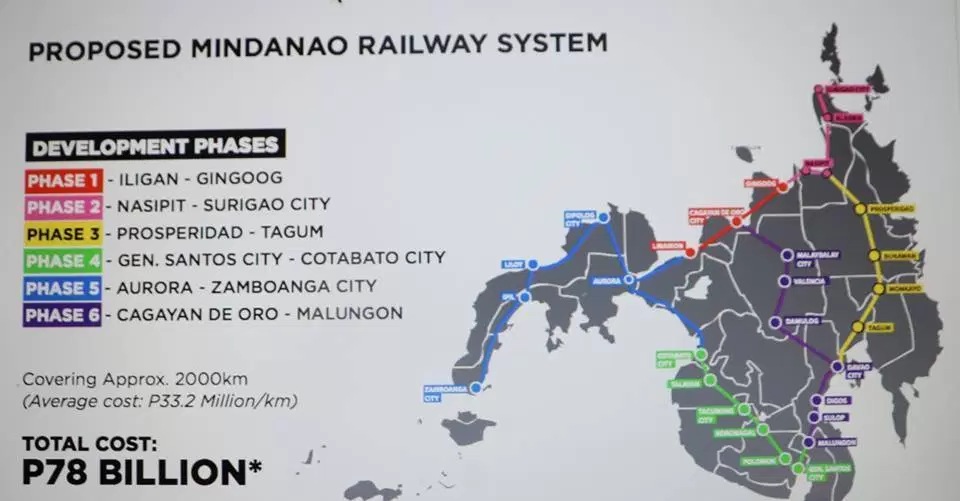 This giant project would boost economy in Mindanao, this is sure. Mindanao accounts for half of the country’s corn output, 83 percent of banana production, 61 percent of harvested coconut, 90 percent of pineapple yield, and 67 percent of commercial fisheries catch, and 36 percent of cattle inventory. The island also sits on $310 billion worth of mineral deposits. All these goods can be transported by train much more economically than by trucks. Ecology is another positive aspect. Yet despite posting a gross domestic product (GDP) of PHP 1.87 trillion, the island’s 21.9 million population accounts for 40 percent of the country’s poor.  Furthermore a train system would be the ticket out of poverty for many of them.

All phases are needed. The blue and the green line (phases 4 and 5) go through politically still instable regions. Would the railway stabilize these regions or should the regions be stable before construction begins? The red and pink lines will be difficult to build. The space between shore line and mountain slopes is in some places extremely narrow. Also the violet line through Bukidnon would be a real challenge for engineers and tunnels are extremely expensive.

The easiest phase to build would be the yellow line from Butuan to Davao. We think it would be the best choice to begin with this line. This would allow to learn and discover unexpected challenges at a reasonable price. Furthermore this line would allow a faster access to the wonderful Mindanao east coast.

The government wants to fast-track the construction of a segment of the Mindanao Railway Project, identified as one of the priority infrastructure projects under the Duterte administration.

“The NEDA Secretariat has been ordered to complete the feasibility study for the most viable segment of the railway, so it would be approved by the investment coordination committee (ICC) and the NEDA board within the year. Construction will start next year,” National Economic and Development Authority deputy director general for investment programming Rolando Tungpalan said.

He said the NEDA infrastructure committee agreed to prioritize the completion of a portion of the Mindanao railway system.

“The business case study identified the whole of Mindanao, but it’s unlikely that we would be able to implement the whole railway system,” Tungpalan said.

Although there have been suggestions to include the project in the pipeline of the public-private partnership program, the NEDA official said the construction of the railway tracks would most likely be undertaken using government funds – possibly including contributions from official development assistance.

The private sector, he said, may participate in the purchase of the trains.

The Mindanao Railway Project is estimated at PHP 78,000,000,000 (78 Billion Pesos). This seems to be an astronomic amount. Is it really? With its 2,000 kilometres of tracks, one kilometre would cost about 33.2 Million Pesos. In Europe, in the flat northern lowlands of Germany 1 kilometre costs about 4.3 Million Euros. This means 226 Million Pesos. Eight times more than estimated in geographically much more difficult Mindanao.

Even if the Mindanao Railway System will be only single track, this won’t cut the costs by a factor of 2. The other cost intensive factor is the electrical installation. The trains in Mindanao will never run with pure electric locomotives because of the already big lack of electrical energy. On the other hand are the extremely expensive constructions of hundreds of bridges and many tunnels which weren’t needed in northern Germany. We think that 150 to 250 Million Pesos per kilometre would be a much more reasonable base of cost estimation. This estimation seems to be valid for all the Philippine Rail projects.

Rodrigo Duterte’s promise to abandon the Philippines’ claim to the Spratly islands in the South China Sea provided China builds the Philippines Rail, suddenly seems really interesting. This might be a long term win-win situation.