AirAsia Philippines not yet in the air

On September 5, 2011, we reported that AirAsia Philippines will begin their operation in October.  Up to now none of the two Airbus A320 did fly in our skies. 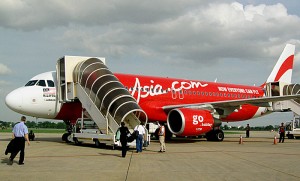 BUDGET air carrier AirAsia Philippines has put on hold its planned inaugural run on December 15 to January next year, even as its two brand-new A320 have been bleeding from rentals at a Clark hangar, as it has yet to secure its Airline Operating Certificate (AOC) from the Civil Aviation Authority of the Philippines (CAAP).
Due to the snail-pace processing of its papers, AirAsia management are resigned to missing the Christmas and New Year surge, and is now planning a January launch, hopefully, in time for the busy Chinese New Year travel weekend on January 23 next year.

And the Manila Bulletin writes:

AirAsia Philippines is set to start its planned inaugural run December 15, but its two brand-new A320s have already been bleeding the company from rental of a Clark hangar, unable to meet the deadline to secure its Airline Operating Certificate (AOC) from the Civil Aviation Authority of the Philippines (CAAP).

“Gone are the days when the former Air Transportation Office (ATO) issued temporary AOC,” says CAAP Director General Ramon S. Gutierrez, who said that the new low-cost carrier (LCC) had to meet all the requirements “in chronological order” based on the certification process.

He said the airline must get through the Flight Standard Inspectorate Service (FSIS), headed by Capt. Elmer Peña. This is the branch that issues certificates of registration and airworthiness of aircraft, air carrier operating certificate, air agency certificates, and certificate of airmen licenses, such as pilots, cabin crew, flight inspectors, and check pilots.

Gutierrez says all CAAP official processes are now encoded in its computer data bank with direct link to the US Federal Aviation Administration (FAA) and any transactions such as issuance of AOC can be monitored by the Americans.

“We will not jeopardize what the CAAP had worked for,” he says, hinting that the Authority will not short cut the issuance of AOC only to be reprimanded by the FAA later.

The CAAP chief said that in processing the AirAsia papers, they wanted to make sure that there will be no aspect that will affect the pursuit of Category 1 rating.

The country was downgraded to Category 2 status three years ago because of allegations of wholesale issuance of AOC’s and other malpractices that were uncovered during subsequent investigations, linking some ranking officials of the defunct ATO.

“With our computer data base, hindi na madudukot ang mga papeles (our documents can no longer be pilfered),” Gutierrez said, alluding to the previous practices that were uncovered by the FAA, leading to the country’s fall to Category 2 rating.

He said the CAAP has provided six of its technical experts to help AirAsia expedite the process, and squelch rumors that he and FSIS chief, Peña are against the speedy processing of the airlines documents, being former employees of Philippine Airlines.

Peña used to be PAL captain before getting the FSIS post, while Gutierrez used to be aide-de-camp of former President Cory Aquino and subsequently worked for Ayala Aviation and FedEx Company of the Lina Group. Prior to his CAAP posting, he was a board director of Zest Airways.

The airline’s Philippine unit may start flights to Singapore, Hong Kong, and Macau and the second plane to ply routes to Bangkok (Thailand), Incheon (South Korea), Kalibo (near Boracay), and Puerto Princesa, according to its Chief Executive Officer Marianne Hontiveros.

AirAsia Philippines targets to bolster its fleet to seven planes by the end of 2012 and up to 16 jets in five years, Hontiveros said in an interview with Bloomberg News in Xiamen. It may use the second Airbus to start flights to Bangkok and Incheon, the CEO added.

[Editor’s comment:] This is a strange constellation. Two of the CAAP executives did work for competitors and one of AirAsia’s owners is a cousin of President Aquino. this looks rather like a political / economical power-play than returning to Category I, doesn’t it?